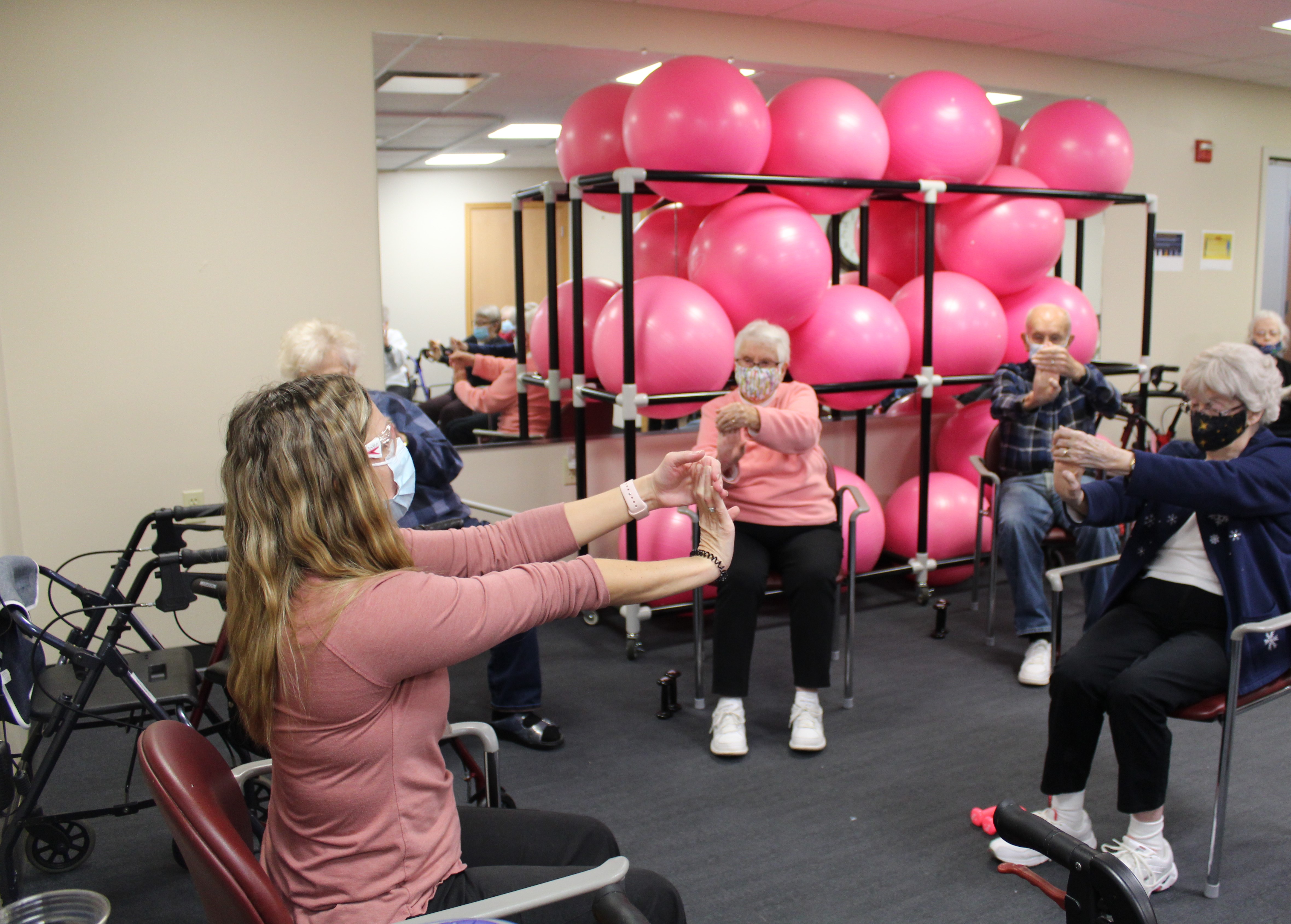 Editor's note: As the third year of the COVID-19 pandemic begins, Global Sisters Report looks at how a sister-dominated industry has been affected by the many changes brought by the novel coronavirus. Read all of our COVID-19 coverage.

The global COVID-19 pandemic hit nursing homes in the United States hard: Nearly 1 million U.S. nursing home residents were infected with the coronavirus, and more than 150,000 residents died from the illness, according to government figures.

In addition, more than 1 million nursing home staff members have had the virus, the Centers for Medicare & Medicaid Services reports, and 2,288 have died from it.

On top of that, costs at nursing homes increased dramatically because of the need for temporary staff and more gloves, gowns, masks and other equipment while the number of residents dropped, reducing facilities' income.

Even today, two years after the start of the pandemic, more than 1,000 Catholic long-term care facilities in the United States, most of which were founded by sisters or are sponsored ministries, and secular nursing homes alike are working through the difficulties that persist. Residents suffer the consequences.

"It's heart-wrenching that we can't give the residents the life we want to give them," said Sr. Mark Louis Randall of the Carmelite Sisters for the Aged and Infirm, who is in charge of mission integration for the order's St. Patrick's Manor in Framingham, Massachusetts. "It's just so demoralizing. You want to give the best quality of life to the residents, and you can't. We're meeting the basic needs, three squares and all that, but you want the rest of it."

Mercy Sr. Mary Haddad, president and CEO of the Catholic Health Association, said the pandemic hit long-term care facilities "on a whole host of levels" and exposed the need for major changes.

"We've known for a long time the need for long-term care and aging-care services are increasing as we have an aging population, and we don't have the infrastructure to support that," she said. "Long-term care exists on a shoestring anyway."

Julie Trocchio, the senior director of community benefit and continuing care at the Catholic Health Association, said nursing homes were struggling even before the pandemic.

"Long-term care is overwhelmingly paid for by Medicaid, and the payment is really a function of state budgets, and those payments usually don't cover the cost of care, at least not high-quality care," she said. The pandemic "devastated nursing homes."

Small facilities run by aging orders of religious sisters are particularly vulnerable when it comes to finances, Trocchio said. Some nursing homes are thriving, but even they can see the entire long-term care sphere needs to be examined.

"We need a new system," she said. "We can't depend on Medicaid. States just don't have enough money." 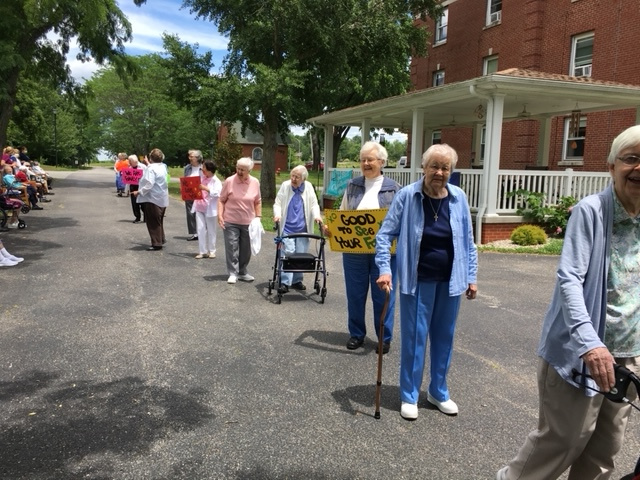 Dominican Sisters of Peace and residents of the congregation's Sansbury Care Center in St. Catharine, Kentucky, enjoy a parade put on for the residents in June 2020. Residents had been socially isolated for months due to the pandemic, and the socially distanced parade was a way to allow the sisters from the motherhouse visit the residents. (Courtesy of Susan Leslie)

Jerry Carley, president and CEO of Benedictine, which has 30 facilities from independent living to skilled nursing across the Midwest, said the pandemic squeezed long-term trends into a much shorter timeframe.

"What we thought we would see in five to 10 years, we saw in 18 months," Carley said. "The fallout is going to be felt for years."

He said the number of nursing homes has dropped substantially in the last two decades as options such as assisted living and home health care have meant fewer residents in nursing care.

A 2021 analysis by the American Health Care Association and National Center for Assisted Living said more than 1,800 of the 14,000 nursing homes they represent could close — more than 1 in 10 — but both Carley and Trocchio said that number is likely overstated; times are tough right now but are getting better. Carley noted that even if true, those most at risk are facilities that likely would have closed over the next decade anyway. The pandemic simply hastened the inevitable.

Strapped for cash and starved for connection

Costs increased dramatically, first because of the need for more personal protective equipment just as the price for it skyrocketed along with demand. Then, as staff got sick or quit, some residences hired temporary staff, but at a much higher cost.

And just as those costs were increasing, revenue dropped. Carley said when hospitals stopped doing elective surgeries, the impact on nursing homes was immediate.

"It used to be that you'd have a knee replacement, go to a nursing home for rehab, and then when you were better, you'd go home," he said. "So right out of the gate, you lost that flow of residents."

The 79-bed St. Anthony Nursing Home in Carroll, Iowa, a sponsored ministry of the Franciscan Sisters of Perpetual Adoration, is attached to St. Anthony Regional Hospital, so even when elective procedures stopped, beds that might have otherwise gone empty were used for hospital patients, keeping the census relatively stable.

But another factor came into play: a sudden lack of new long-term residents. Some families were reluctant to admit their elders for fear of the coronavirus that was ravaging nursing home populations: Nursing home residents made up 35% of the deaths caused by COVID-19 despite being only 1% of the population.

When the resident census drops, so does the revenue, but fixed costs for utilities, insurance, maintenance and many other aspects of running a nursing home remain, further squeezing the budget.

Nursing home officials who talked to Global Sisters Report said one big issue that kept new residents away early in the pandemic was the fear of isolation.

"There's no visitors, you have to isolate yourself in your room, you can't eat meals with your friends — who wants to go there? Not me," Carley said.

Now, visitors are allowed again, though many precautions remain in place.

"We're dealing with people at the end of their travels. To say the last 18 months or two years is going to be visitor-free is asking a lot," Smith said. "That was a huge sacrifice for our residents and families."

Sr. Theresa Keller, a Franciscan Sister of Perpetual Adoration who sits on the St. Anthony board, said social isolation extends to the grieving process when a resident dies, not only for the family and other residents, but also the staff who cared for them, sometimes for many years.

"They suffered a lot," Keller said. "Sisters and most elderly folks are tremendously social."

Not being able to carry out a community's traditions when a sister dies is especially difficult, said Sr. Susan Leslie, the mission group coordinator for the Dominican Sisters of Peace in St. Catharine, Kentucky, which includes the Sansbury Care Center, a 59-bed facility serving religious and laywomen.

For more than a year, the sisters in the motherhouse next door were unable to have Mass with the sisters in the care center. But when two sisters died on the same day in the summer of 2021, Leslie said the rules had to be re-examined.

A special screening process was set up outside the chapel and social distancing was observed, but they were together.

"It was very different. Even though we were mourning, we were also celebrating," Leslie said. "You could feel an energy in the air, you could sense the joy in being able to be together again that way."

Health care workers in facilities that receive federal money — essentially all nursing homes, thanks to Medicaid — must be vaccinated against COVID-19. But that has not caused a big departure of staff unwilling to get the shots.

Leslie said Sansbury did lose a few employees over the vaccine mandate, but most understand not only what is at stake, but the position of the residents.

"We need to look at the reality that we are privileged to work in the home of these 43 women," Leslie said. "It is their home, and we need to respect that." 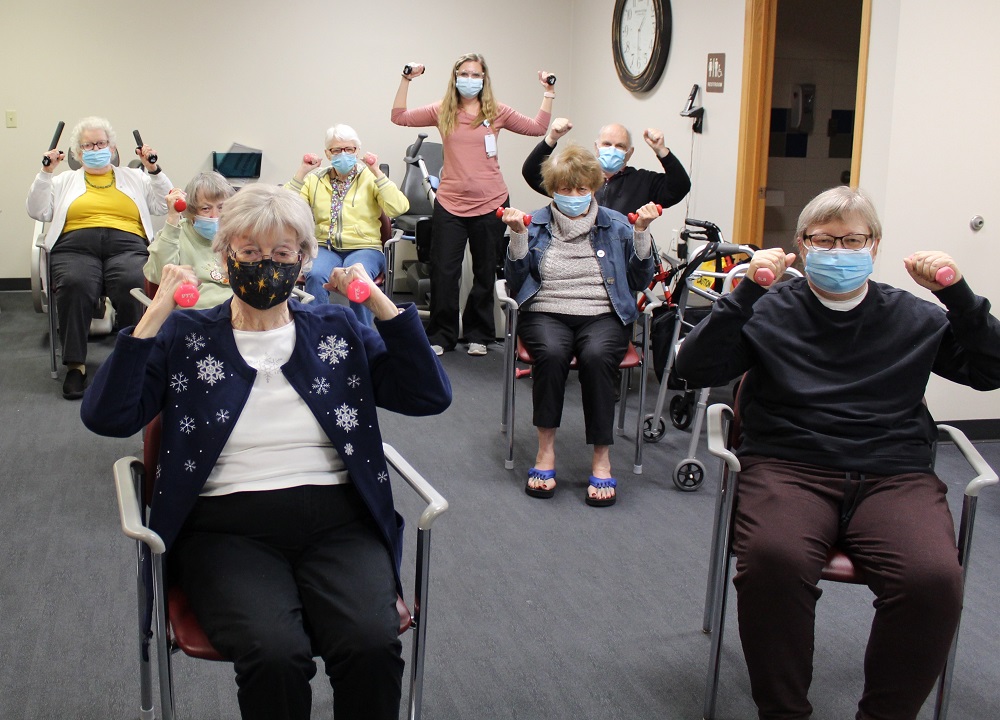 The bigger issue, the officials told GSR, is that being a caregiver requires hard work over long hours at not enough pay.

"Medicaid pays us less than it costs us to care for the residents," Randall said. "That causes us to not be able to pay the staff what we'd like to. Thankfully, they're dedicated, but that's not fair to them."

The lack of staff can also affect revenue.

"If you do not have enough staff, you can't admit residents, which keeps your census low and throws your budget off," Randall said. "You have to close a unit or partially close a unit so you can fully staff another unit."

Carley said nursing homes have gone from a shortage of potential residents at the beginning of the pandemic, when elective surgeries stopped and people were reluctant to admit family members, to not being able to accept them because of a lack of staff.

"We're seeing bottlenecks. Hospitals want to discharge people to nursing homes, and nursing homes are saying, 'We can't take them because we don't have the staffing.' "

Nursing care is already expensive — an average of about $100,000 a year — but that cost will have to increase substantially to pay the wages required to attract and keep caregivers, Carley said.

Facilities that can utilize sisters have an advantage, but that is limited, as well. St. Anthony has help from international Holy Spirit Sisters, mostly from India, Smith said.

"I don't know where we would be with our workforce right now if we didn't have that," he said. "That's appreciated, but it also helps immensely in a spiritual sense with the patients."

Trocchio said the pandemic has shown that the nation needs a way to pay for long-term care. There was a component of the Affordable Care Act to address the issue, she said, but it was one of the first provisions cut.

There is hope, however.

"It's important that we not paint a doom-and-gloom picture," she said. "Nursing homes that are creative, that have a loyal staff — they've been really heroic throughout this pandemic. We've had administrators living in campers. I think Catholic long-term care is going to survive, but there may be some bumpy times ahead."