When the pandemic came to Colombia, to the Franciscan Sisters of the Immaculate

by Cody Weddle
Coronavirus
Religious Life
This article appears in the Saints Next Door feature series. View the full series. 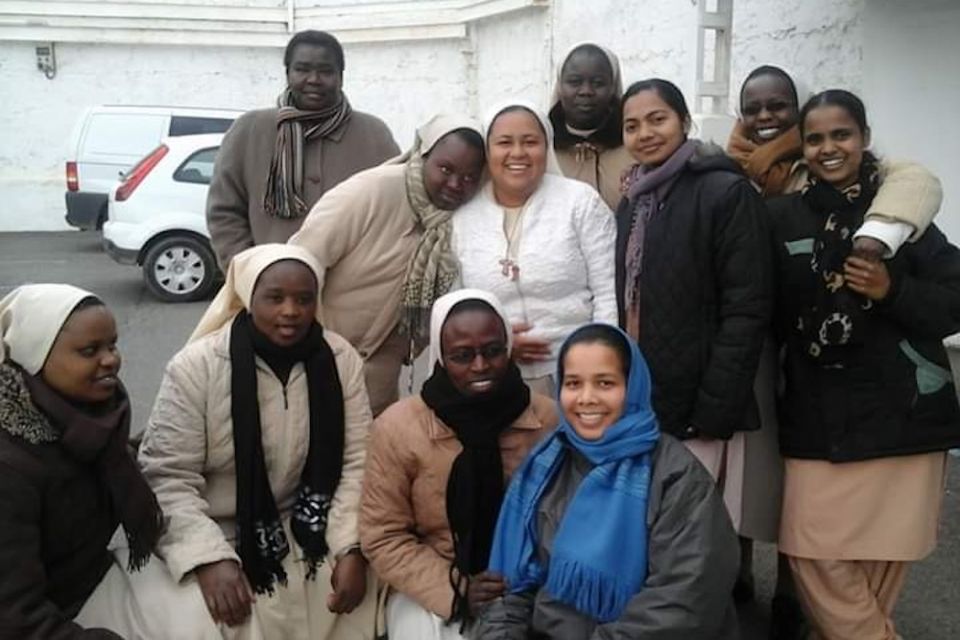 Sr. Johana Rivera Ramos, center in white, poses with other sisters in the juniorate from Africa during a trip to Spain in 2018. (Provided photo)

Editor's note: On Holy Thursday, Pope Francis prayed for the dead as well as for the priests, doctors and nurses who he said represented the "saints next door" during the coronavirus pandemic. Over the next months, National Catholic Reporter and Global Sisters Report will be bringing the stories of Catholics in this crisis: those who have died, but also those whose service brings hope. To submit names of people for consideration for this series, please send a note to saintsnextdoor@ncronline.org. You can read NCR's Saints Next Door stories here.

Bogotá, Colombia — The headlines of a new coronavirus arriving in Colombia came as Sr. Johana Rivera Ramos prepared for the happiest and most consequential moment of her life to date.

The 33-year-old member of the Hermanas Franciscanas de la Inmaculada (Franciscan Sisters of the Immaculate), a Valencian order out of Spain, planned to take her perpetual vows. She would become the first Colombian to join the sisters.

"I knew Johana my whole life, and I know she was never as happy as she was being a sister," Julieth Arzuza, a childhood friend of Rivera's, told Global Sisters Report.

"She was so excited, she wanted to make T-shirts for the whole family for the ceremony," Rivera's younger sister, Yiseth Rivera, said. "Mine would say, 'I'm the sister of the nun.' "

The sandals, the ring and a new habit had been bought. Another close friend had bought a new outfit after Rivera requested she dress elegantly for the "special" and "romantic" occasion.

But as the headlines of the new virus became more prominent and rumors swirled of a mandatory quarantine in the works, it became clear that the ceremony may need to be postponed. By March 14, Colombia's health ministry confirmed that there were two cases of the virus in Cartagena, where the sisters live, and 22 in the entire country.

"The authorities said there had been a case in Cartagena, and it would be prudent to start a voluntary quarantine," said Sr. Maria José Alamar, one of the three Franciscan Sisters of the Immaculate in Cartagena.

Even though the Colombian government didn't issue a national stay-at-home order until March 24, the three sisters decided to take action early, isolating themselves completely beginning March 14.

Alamar, Rivera and Sr. Consuelo Vilaplana closed up their food kitchen outside of the city, and Rivera attended premarital counseling for a local couple at their parish before canceling all further obligations.

"When she came back home after the counseling, she said she had a bad headache and a sore throat, but Johana normally got migraines and colds," Alamar said.

But Rivera's symptoms progressed. The sisters called a doctor, who said it appeared she had tonsillitis. Two days later, another doctor came. Again, tonsillitis was the diagnosis. Stronger medications were prescribed.

The sisters started to wonder if Rivera had somehow contracted the new virus.

"We called the authorities, and they asked us if the sister had had contact with people who had traveled or if she had traveled," Alamar said. "The answer was always no, and they said she wasn't at risk for the new coronavirus."

By March 23, Rivera struggled to breathe, gasping for each breath. Her temperature spiked. Another doctor who came to the home said she appeared to have pneumonia and would need to be hospitalized. At the local clinic, she received her first test for the new virus as a precaution.

The sisters and Rivera's family called daily for updates. 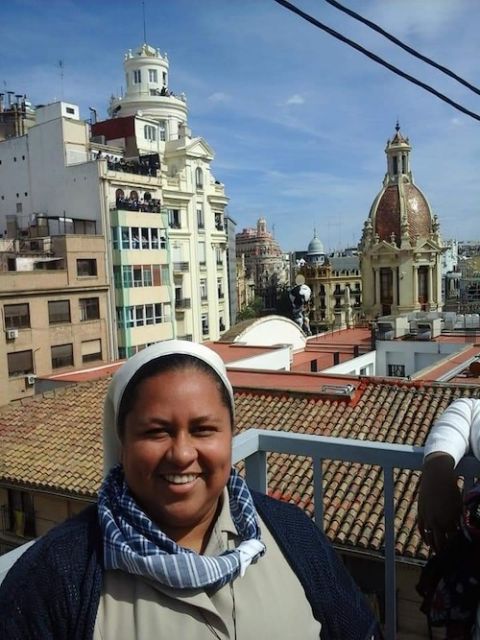 Sr. Johana Rivera Ramos poses for a photo in Valencia, Spain, where the Franciscan Sisters of the Immaculate was founded, during a visit in 2018. (Provided photo)

"She had told us when we first started hearing of the pandemic to pray, that it was time to get on our knees, and that's what we did," Yiseth Rivera said.

Word also spread to her parish, where Rivera was beloved by young parishioners, according to Fr. Jose Perdomo.

"The young folks in the archdiocese adored her," he said. "When she was sick, they sent out mass notifications. They didn't even sleep as they prayed for her healing and salvation."

But with each call to the clinic, the sisters would receive "worse news than the day before," according to Alamar. And on March 27, two days after her planned perpetual vows, Rivera succumbed to her illness.

Two days later, on March 29, the results from that test came back: positive for COVID-19. Rivera had become the youngest victim in Colombia of the virus so far.

The sisters, whose own tests later came back negative, speculate that Rivera came into contact with the virus during her last day leaving the house while doing premarital counseling. Her case proved that the virus was spreading in the country long before authorities implemented measures to slow its growth.

"There are days we still can't believe it," Alamar said. "What we do know is that Johana became infected while doing good work in her community, spreading the word of God."

While the sisters, her family and many in the community remain shocked by Rivera's sudden passing, they find solace in remembering her cheerful personality and dedication to the community. 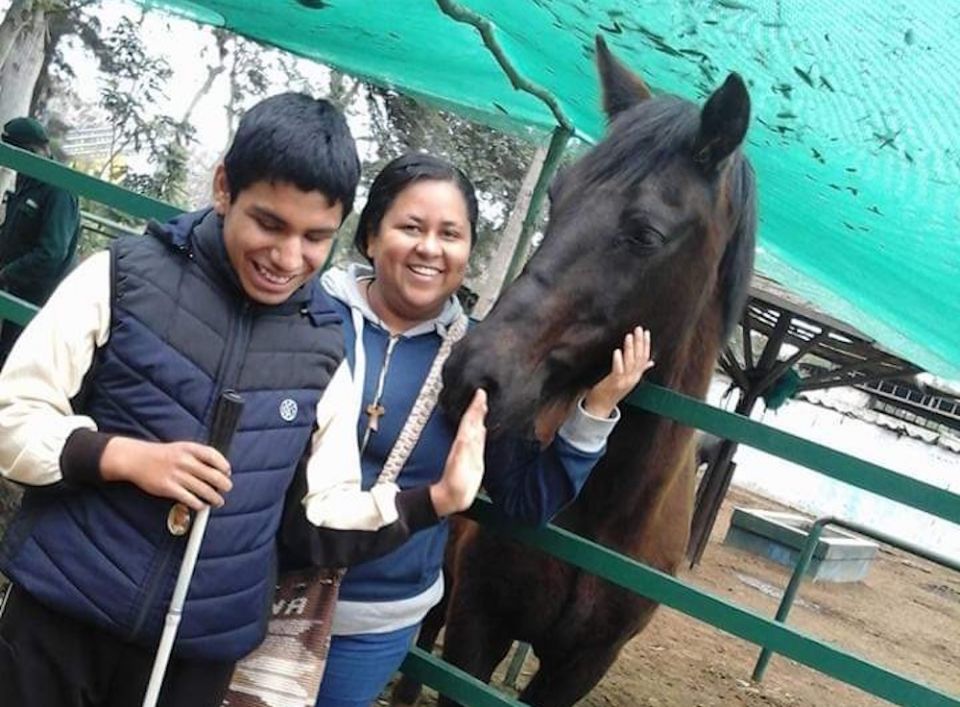 Sr. Johana Rivera Ramos poses with a student in Peru, where she lived and worked for two years at schools for children who are deaf and blind. (Provided photo)

"She was just a joyful, humble, simple woman," said Belkys Quintana, a friend who worked closely with Rivera in the parish.

"Her nature was to be joyful," Perdomo, the parish priest, said. "I'll never forget the Christmas dinner we organized for around 400 Venezuelan migrants last year, and one of them asked her, 'Sister, do you want to dance?' She said, 'Of course.' "

After "joyful," her relatives and community members describe a young woman determined to do good in her community, passionate about working with young people and persevering in the projects she undertook. At their food kitchen in the poor slums surrounding Cartagena, the sisters attempt to prevent children from falling into gang violence and prostitution, along with providing a meal. Rivera had spearheaded a new initiative that would offer remedial education to those children falling behind in school.

The idea to offer remedial classes came after Rivera spent two years with the congregation teaching children who are deaf and blind in Peru.

"She was so excited about that project with the children. It was going to be a very busy year for her," Yiseth Rivera said.

And despite the calling she felt since a teenager to be a sister, Rivera remained close to her family and community back in the small town of San Martín de Loba, a town where "the streets are just now being paved and farm animals walk through the streets," according to her childhood friend Arzuza.

"She was still very much part of the family, despite belonging to her community. She still felt a commitment to us," Yiseth Rivera said.

For her friend Quintana, whom Rivera had asked to moderate her perpetual vows ceremony and who had a new outfit for the occasion ready, "the clothes may still be there in my room, but we have to accept it, and with joy, because when the Lord calls, the best thing is to be in his presence. She took her vows in heaven."

[Cody Weddle is a contributing writer based in Colombia.]

Connection, compassion and care in a Bronx COVID-19 ward

Coronavirus | When the pandemic came to Colombia, to the Franciscan Sisters of the Immaculate

Trust in God stems from our limitations

Gratitude is giving of oneself

Discovering the call to international service