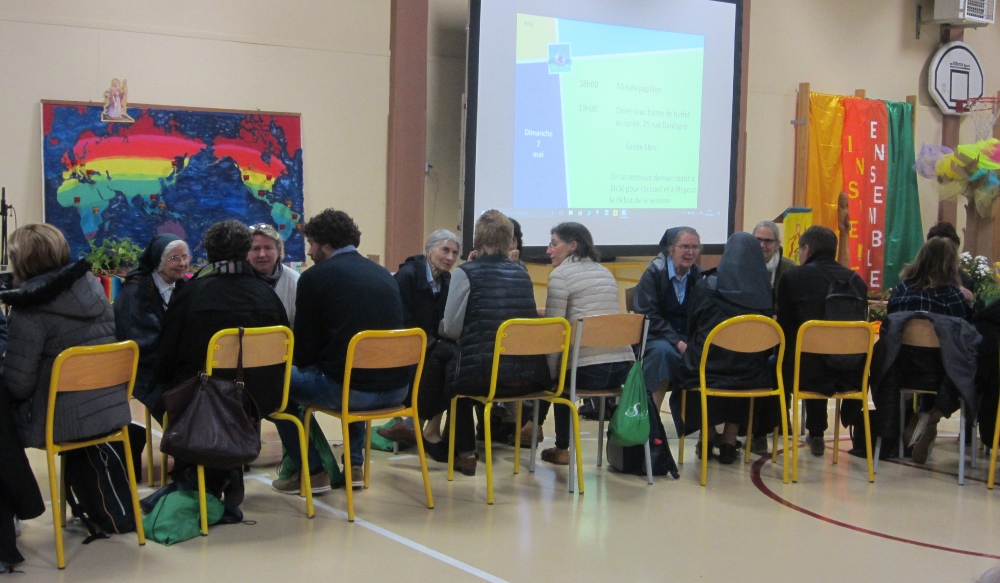 At a meeting of more than 100 members of the Méricien network, participants take part in the "instant discussion," a kind of speed conversation. Every five minutes, people moved four seats to the right for one row, to the left for the other, so that everyone was able to meet a maximum of people. (GSR photo / Elisabeth Auvillain)

Paris, France — Ursuline sisters, teachers, school principals and representatives of parents from all over France came to Paris May 6-8 to share their experiences and discuss the ways they face the challenges of climate change and migration.

More than 100 members of the Méricien network — named after St. Angela Mérici, who founded the Company of St. Ursula in Italy in the 16th century, gathered to discuss the theme: "Mériciens facing the challenge of climate change and migration. Together, let's dare to show solidarity."

"Both topics are linked," said Sr. Brigitte Brunet, head of the Province of France, Belgium and Spain in her talk opening the two-day session. "Environment is a fundamental issue, and the plight of refugees is, too. We have to work together, be audacious and defend human dignity everywhere in the world."

Brunet said many of the Ursuline sisters' schools and students' hostels have been involved in different actions to protect the environment. When the United Nations prepared its COP21 Paris conference on climate change, which led to an agreement in December 2015, the Ursuline sisters launched their own agenda, "Serviam 21, responsible territories."

"Serviam 21 is a program for the 21st century to include everyone in a process of working together for a sustainable development bearing in mind the social, ecological and environmental issues we are facing," said Sr. Laure Blanchon, professor of ecclesiology who also teaches the church's social doctrine and helped organize the meeting.

"All of our actions have to be thought over, starting with what we have heard, what is needed locally," Blanchon said, introducing the variety of projects. "We have to be audacious, creative and not afraid of experimenting. We must remember to establish a benevolent relationship between the strong and the vulnerable with patience and enjoy our differences."

Our ecological approach becomes a social one, she went on, referring to Pope Francis' encyclical, Laudato Si': "The human environment and the natural environment deteriorate together; we cannot adequately combat environmental degradation unless we attend to causes related to human and social degradation."

The meeting was held in Sainte Ursule-Louise de Brettignies in the 17th arrondissement of Paris, a school that recently received the label E3D — Ecole en Démarche de Développement Durable — which the Paris board of education gives to schools working for sustainable development.

The school serves more than 1,600 students from preschool to senior high school. The first phase of a project to promote sustainable practices began in 2014, launched by volunteer 10th-grade students and three of their teachers, focused on waste disposal. The students noticed there was no sorting of garbage and that far too much paper was being used. Special cans were bought to enable recycling of paper, steel cans and plastic bottles, and an information campaign was launched to help students understand the need for recycling.

The second phase, currently underway, involves the creation of a vegetable garden, a vegetable wall and various plants. Students also painted a mural to explain why biodiversity is important.

"The students loved it, but we are now in our third year, and we notice that they are not so enthusiastic anymore," said Maud Mathourey, a science teacher who leads the project with her colleague Nic Geordan Mbadinga.

The school also has redesigned its cafeteria. Every day, students eat a lunch that is 80 percent fresh produce, bought mainly from organic farms. 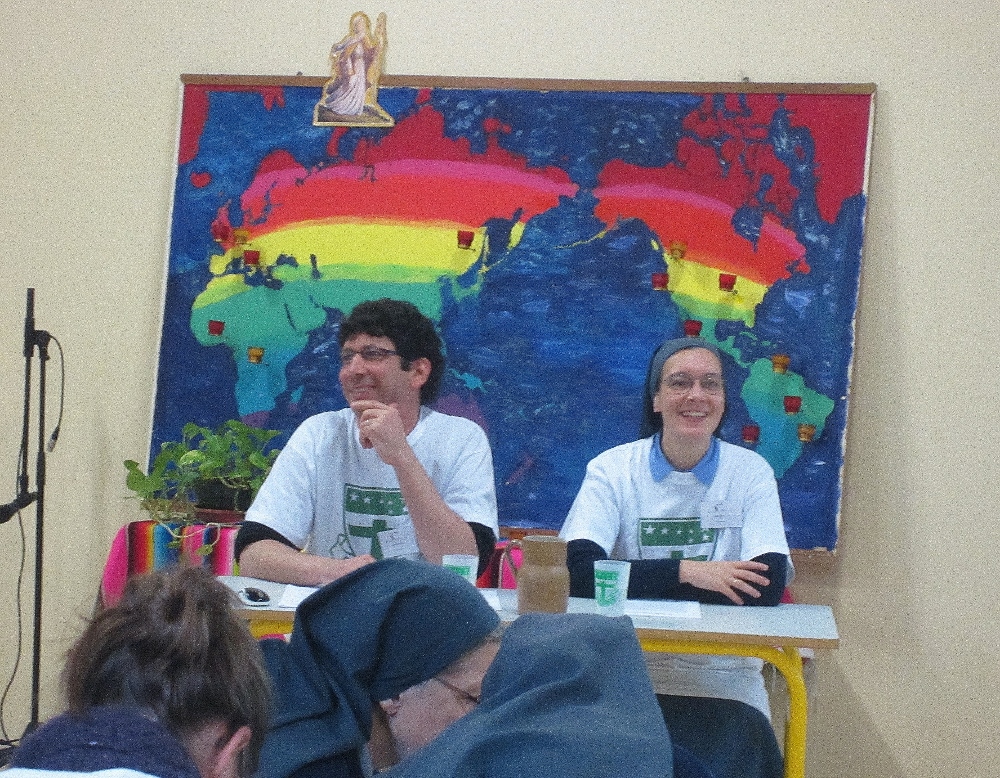 "Of course, if we cannot find any organic type of fruit unless we have them shipped from a 1,000 km away, we prefer to buy local produce coming from a farm in the Paris region," said Stéphane Ducloux, the chef, who said he talks to students every day and explains the importance of eating greens. "When we offer cake or fruit for dessert, we know they are not going to choose to eat an apple. So we give them the apple with the piece of cake."

The Ursuline sisters are updating one of their buildings on Rue Gay-Lussac in Paris' Latin Quarter along environmentally friendly lines. Work started on the building, which houses Foyer Serviam, a dormitory for female students, as well as the Ursuline community, in 2012 and was completed two years later. Work had to follow strict guidelines because the building's façade, dating from the 17th century, is classified as a historic monument.

Now, the rooms are well-insulated, and solar panels provide some of the building's energy. Heat from shower water is recycled, lights go off when someone leaves the room, and dirty ("grey") water is reused. A roof garden has been created on part of the terrace, where visitors can enjoy a view of the Paris skyline.

The Ursuline sisters have always linked their ecological concern to a social commitment, and their actions to protect the environment are never the only ones undertaken in the communities and the schools.

In Caen, Sr. Catherine Meurillon and other members of her community have been teaching French to refugees coming from countries such as Ethiopia, Iraq and Afghanistan.

"I started to teach French to this refugee from Eritrea," Meurillon said. "She was a Muslim, a mother of two. We got to know each other and enjoy each other's company. As Christmas came near, we thought of inviting her with her husband and children to share a Christmas meal in our community. This would not have been possible if we had not built a friendly relationship over time."

Sr. Colette Dehurtevent from the Ursuline community in Angers told the gathering about an evening playing music with refugees. Other sisters offer schooling to Iraqi refugee children and to young migrants traveling alone or give shelter to asylum-seekers.

Many Ursuline schools have established a link with a school or a community in faraway countries. Most schools raise funds either for schools like in Mexico or in Cameroon or for building a road to help children go to school in Cambodia.

"Through the concern for the world, we can speak to young people about God," said Sr. Felicity Young, who came from London to attend the meeting.

"When we see people of goodwill care for the world, we see the work of the Holy Spirit," added Sr. Una McCreesh, who came along with her to Paris.

Participants to the Paris meeting are due to meet again in two years' time in Bayonne, a town near the Spanish border, where students and teachers from the Largenté school have been involved in actions aimed at protecting the environment, including studying effects of climate change. Environment is always an important theme of these meetings, where sisters and other members of the Méricien community exchange experiences and hopes for the future.

Environment | In France, Ursuline Sisters, students promote initiatives to save the planet

Don’t go back to sleep