• Legacy of mining operation lingers in Honduras long after closure 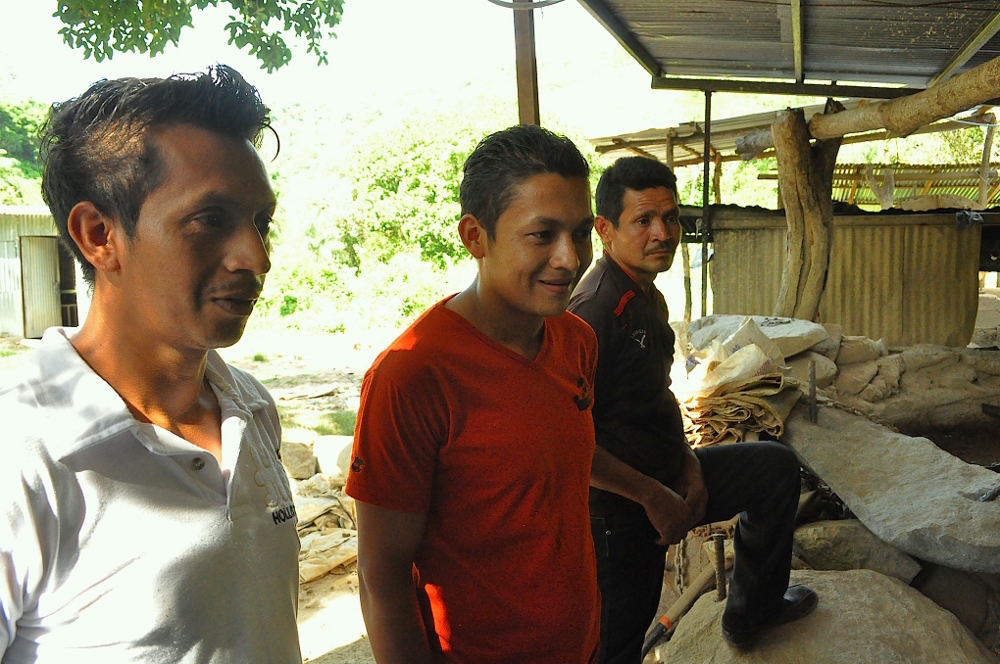 Miner Abraham Núñez with two other miners who work in artisanal mines in the mountains of El Corpus. (GSR photo / J. Malcolm Garcia)

El Corpus, Honduras — Global Sisters Report is focusing a special series on mining and extractive industries and the women religious who work to limit damage and impact on people and the environment, through advocacy, action and policy. Pope Francis last year called for the entire mining sector to undergo "a radical paradigm change." Read more about Honduras mines and activism, including the involvement of Catholic sisters, in earlier stories by J. Malcolm Garcia.

"I went in the mine Monday morning and came out later for coffee," Núñez, 36, recalled. "I went back in a half hour later. I heard a hellish noise. I was just going in, and I turned around and ran out."

The noise Núñez heard was a landslide that trapped 11 men in a mine in this mountainous area in July 2014. Eight of the miners died. Three were rescued. The mine closed, but Núñez went back to work at another mine the next day.

"It is the only work we have around here," he said. 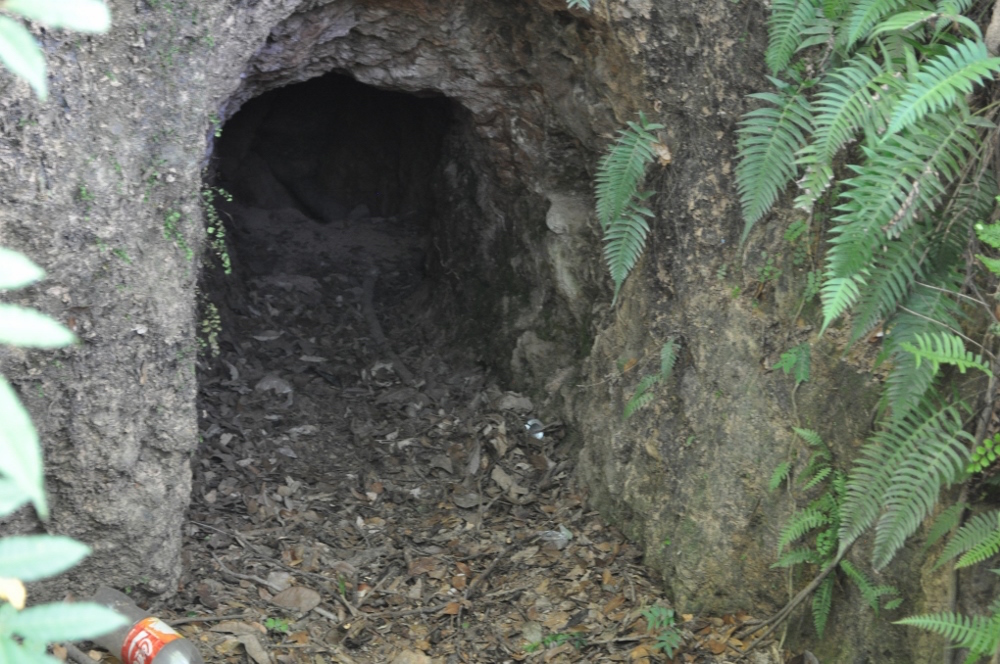 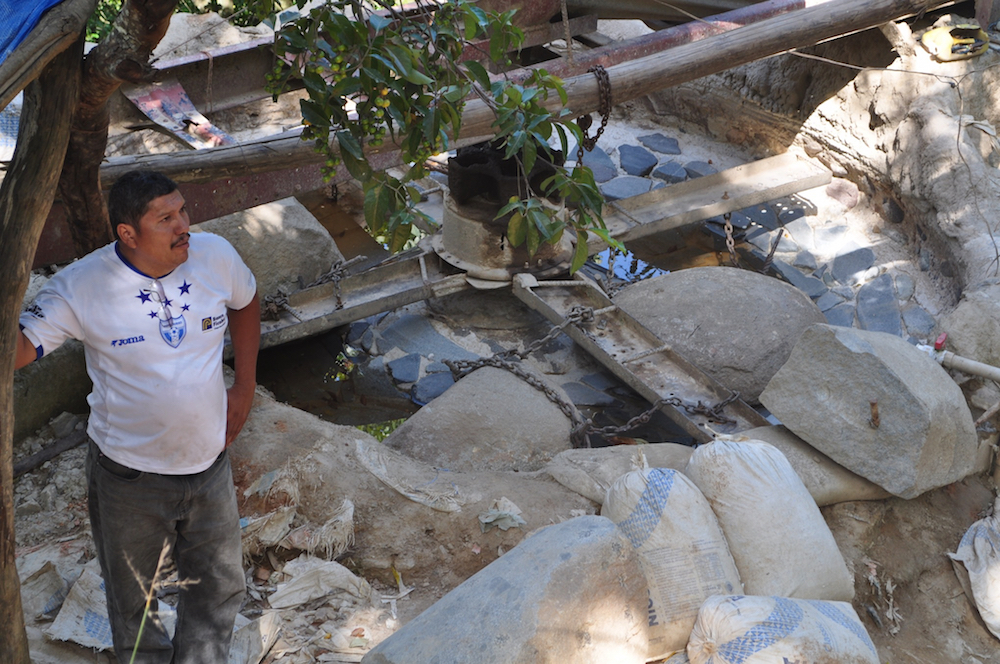 A man stands near a mill that separates gold from other material in the mountains of El Corpus using mercury and water. (GSR photo / J. Malcolm Garcia)

In the mountains of southern Honduras, where even four-wheel drive vehicles have trouble navigating steep, rocky dirt roads, hundreds of small-scale, artisanal miners eke out a living digging for gold in mines that threaten their lives and the environment. The miners rent these artisanal mines from private landowners for almost $500 a month. Some of the miners work for themselves. Others work for businesses which rent the mines and pay them $12 to $22 a day.

The miners work nine to 10 hours a day and longer. Many use cocaine and other drugs to stay awake or to dampen their fear. Sometimes, Núñez said, miners are paid in drugs. He said he did not use drugs. The miners wear no helmets or special equipment.

"Those things are expensive," Núñez said.

The miners haul their loads to nearby mills, or "rastras," a slang term used for the truck engines that operate the machinery. The mill separates the gold from the soil and rock through the use of mercury, which draws away other metals.

The process takes about four hours and uses hundreds of gallons of water from nearby streams. Mill operators release the mercury contaminated water back into the environment, where it mixes with organic matter and transforms into another toxic substance, methylmercury. 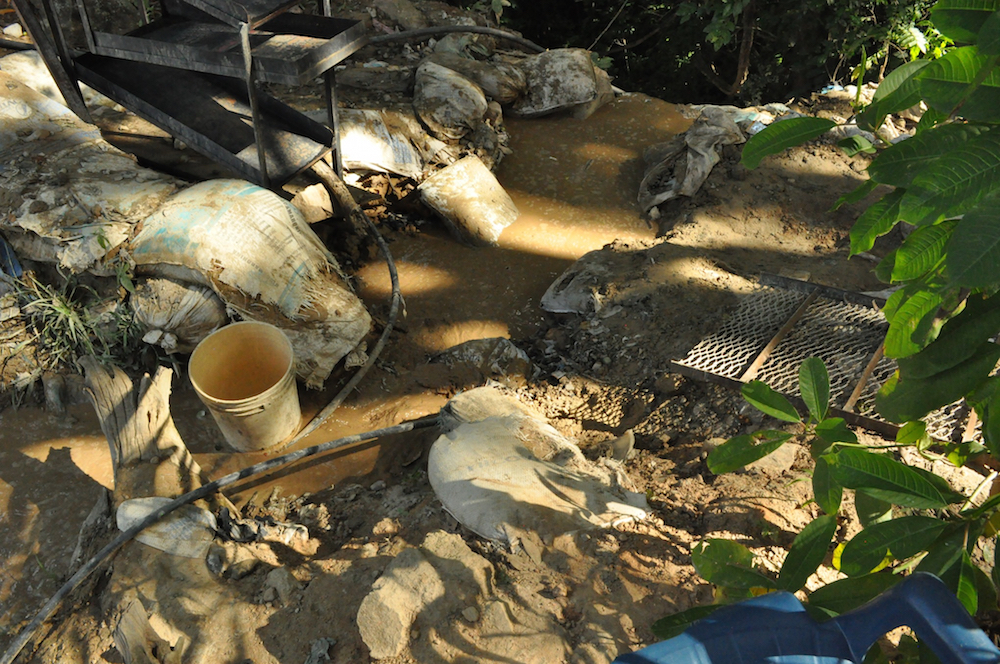 Mercury poisoned run-off from a mill in El Corpus flows back into nearby streams and rivers. (GSR photo / J. Malcolm Garcia)

"I think nothing good comes from mining," said Mario Sanchez, a priest at Our Lady of Purification in El Cristo. "There is no regulation of mercury. You can buy it anywhere. We have had a lot of deaths. These men left wives and children. One widow has eight children who are now without a father."

Núñez, however, will continue mining. He knows of the dangers but trusts he'll be able to avoid its consequences.

"You hear a crushing noise like walls caving in," he said. "It is a terrible noise and you know you have to get out."

Why the earth won’t green without us

Acting in the midst of grief: how to be during this time