February 2 update - The scheduled prayer service in Cedar Rapids has been moved to Feb. 6 due to weather.

As the eyes of the nation focus on the Iowa caucuses on Feb. 1, the 13 congregations of Catholic Sisters of the Upper Mississippi River Valley want to capture the attention of participants to call for an end to environmentally destructive policies and practices, placing more than 20 billboards in strategic locations throughout state, southwest Wisconsin and western Illinois.

The billboards, posted in January and into February, carry the message "Standing with Pope Francis; Caring for our Common Home." In his latest encyclical, Laudato Si', Pope Francis urgently calls people all over the world to take action to protect the earth.

Environmental issues have not yet gotten much attention with the candidates and many voters. The billboards are an effort to change this.

The Catholic Sisters for a Healthy Earth Committee (CSHE), which represents the communities of women religious sponsoring the campaign, initiated the plan for the billboards.

"Our big hope is that people see that caring for the climate, caring for the earth is a moral obligation," said CSHE committee member Sr. Joy Peterson in an interview. "It's not political, even though we need to influence politicians, but it's an issue so important to the future of all creation. We also want to stimulate further response to the encyclical reminding people of that message that earth is our common home."

People are also urged to call attention to the humanitarian challenges of climate change with legislators and candidates at the caucus and throughout the election season.

"Caring for our Common Home also invites each of us to do our part to lessen the detrimental effects our actions have on the environment," said School Sister of Notre Dame, Sr. Kathleen Storms, director of Our Lady of the Prairie Retreat in Wheatland, Iowa. "When our personal actions align with Pope Francis' message, we will effect change in our homes, neighborhoods. When our legislators see us taking this message seriously, they will find ways to make changes that will alter our state and global actions."

The billboards are placed in the Iowa cities of Bettendorf, Cedar Rapids, Clinton, Davenport, Des Moines and West Des Moines, Dubuque and Sioux City, in the Tri-State areas of Rock Island and Moline, Illinois, and Kieler, Wisconsin.

"Part of the reason for our billboard campaign is not only to encourage us to talk with our representatives and the candidates about incorporating the environment into our policies, but it's also that we keep aware, keep moving and discovering all the riches in the encyclical, so we don't just buy a copy, read it once, put it on the shelf and forget it," said committee member, Dubuque Franciscan Sr. Michelle Balek.

Short public common prayer services are being held in each city where the billboards are posted. Dubuque and Davenport services were held Jan. 27 with a Des Moines service planned for Jan. 31 and Cedar Rapids on Feb. 6 at noon. (The latter date was originally Feb. 2, but was changed due to weather.)

In Dubuque, about 50 sisters, associates and friends carrying placards with the billboard message, huddled on a cold windy day near the billboard on 8th and White Streets.

The sung refrain of "Sacred the land, sacred the water" by Franciscan Br. Rufino Zaragoza carried the theme.

"The climate is a common good, belonging to all and meant for all."

"We need only to take a frank look at the facts to see that our common home is falling into serious disrepair."

"Today we cannot help but recognize that a true ecological approach always becomes a social approach, which must integrate justice in the discussions of the environment, to hear the cry of the earth with the cry of the poor."

The prayer petitions that followed called for actions needed to halt the practices harming the environment:

"We pray that the agreement from the Paris Climate Conference will truly help us to care for our common home and each other."

"We pray for the next steps along the journey that governments and others must take. We ask that God will guide them in fulfilling their commitments justly and in raising their ambition to meet the needs of the world."

A few beeps of solidarity and waves from passing lunch-hour motorists punctuated the prayer service.

"May all who pass by this billboard be moved to work for the good of our common home," prayed Peterson at the conclusion of the service.

The response to the billboards has been very positive. "Thank you sisters for living and preaching the call for our planet's sustainability! Standing with you from Milwaukee," wrote one commenter on a community's Facebook page.

Sisters United News, comprised of communicators from these religious communities created the "Care for our Common Home" message for ads appearing in the USA Today and local diocesan newspapers during the September visit of Pope Francis to the United States. Members of the CSHE committee expanded on that idea as they planned for the pre-caucus billboard campaign.

Catholic sisters who collaborated on both the ads and the billboards have created other Gospel-themed justice issue messages over the past 20 years. A billboard campaign before the 2012 caucus urged people to be part of welcoming communities, to accept and help immigrants searching for safety and better lives for their families.

With the current billboard, they want to raise awareness and encourage all to walk more gently on this planet to preserve our Earth for future generations.

This message is also going out on posters on city buses in Dubuque. In addition there are frequent postings on Facebook and Twitter. These can be found at:facebook.com/catholicsisters (which includes videos of the Jan. 27 prayer service) and twitter.com/catholicsrs.

[Carol Hoverman, OSF, is a member of the Dubuque Franciscan Sisters. In 2015 she retired as director of communications and editor of The Witness, the archdiocesan newspaper for the Archdiocese of Dubuque, Iowa. She is a member of the Sisters United News (SUN) and parish musician at St. Patrick parish, Dubuque.] 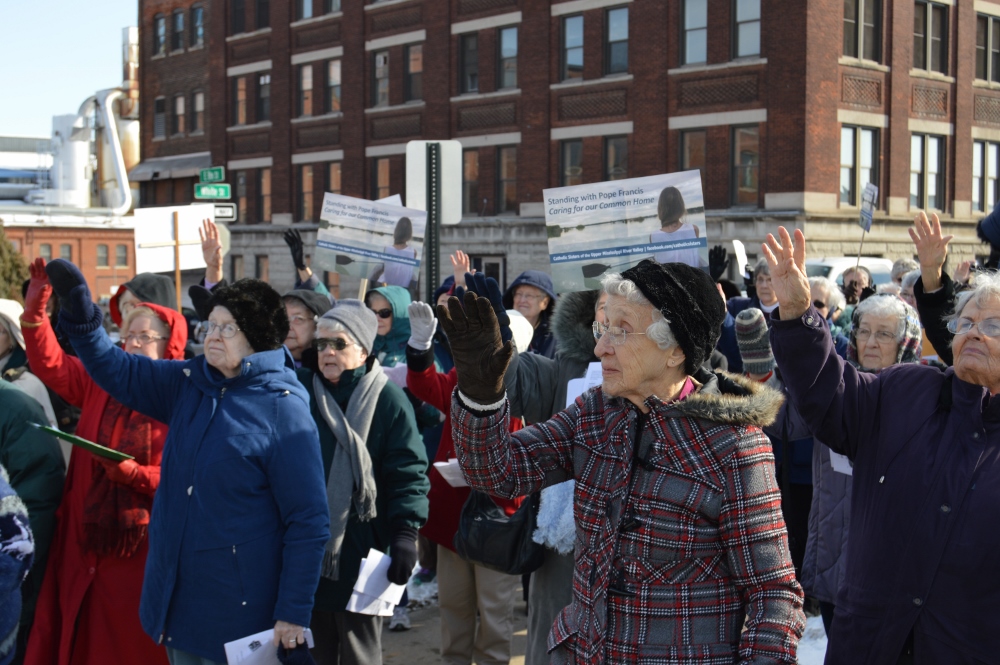 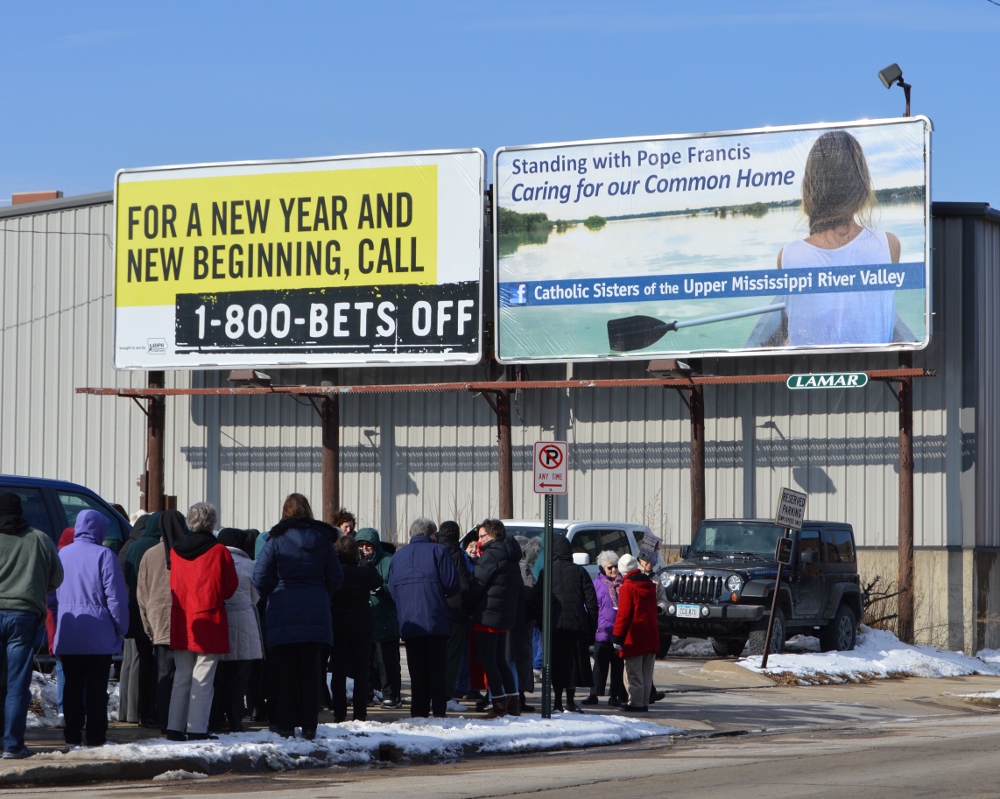 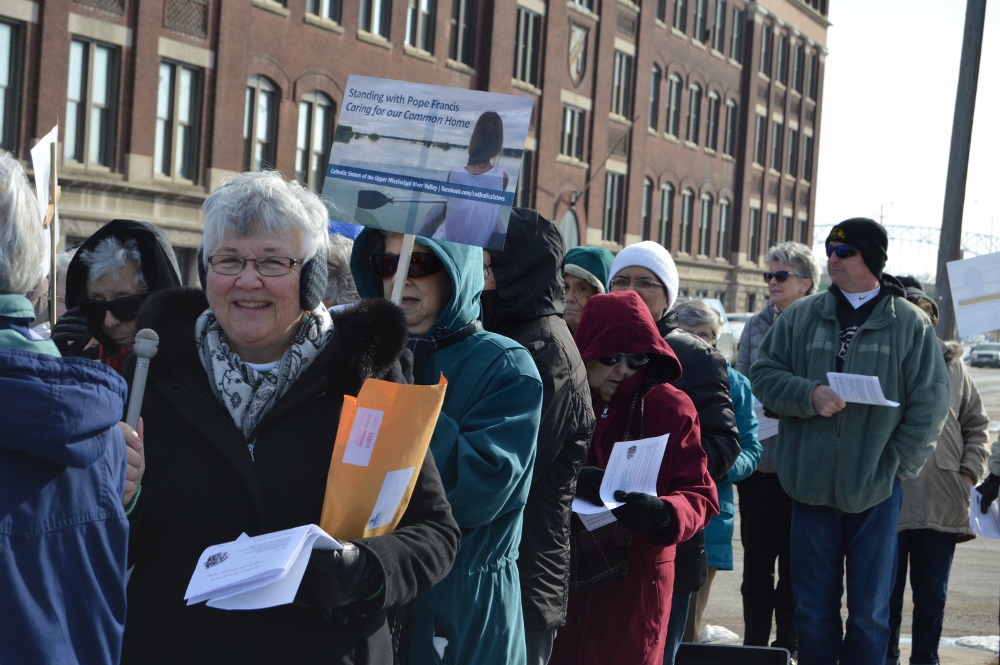 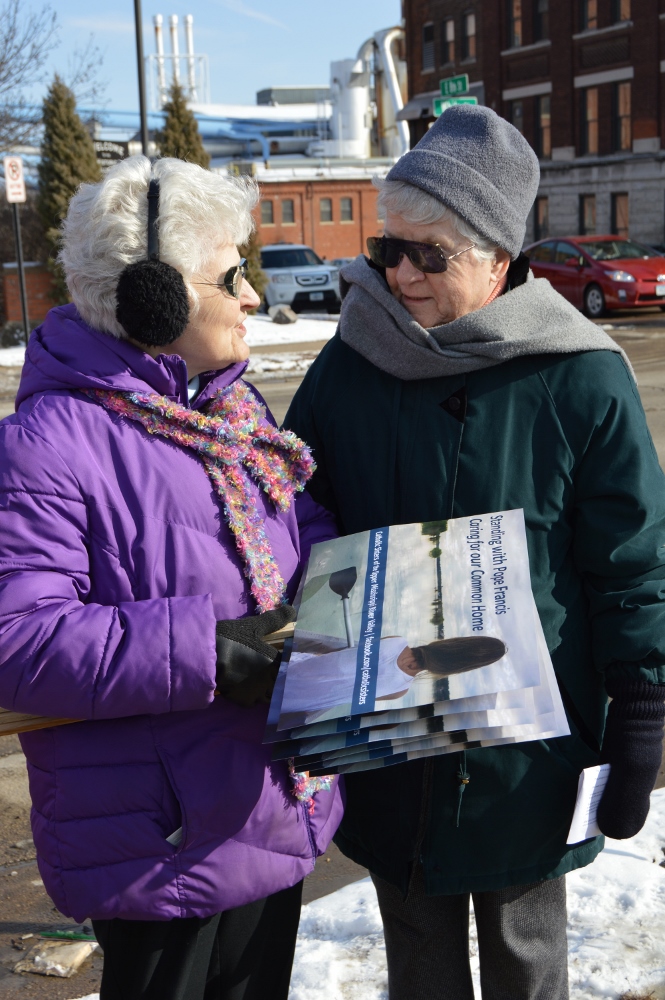 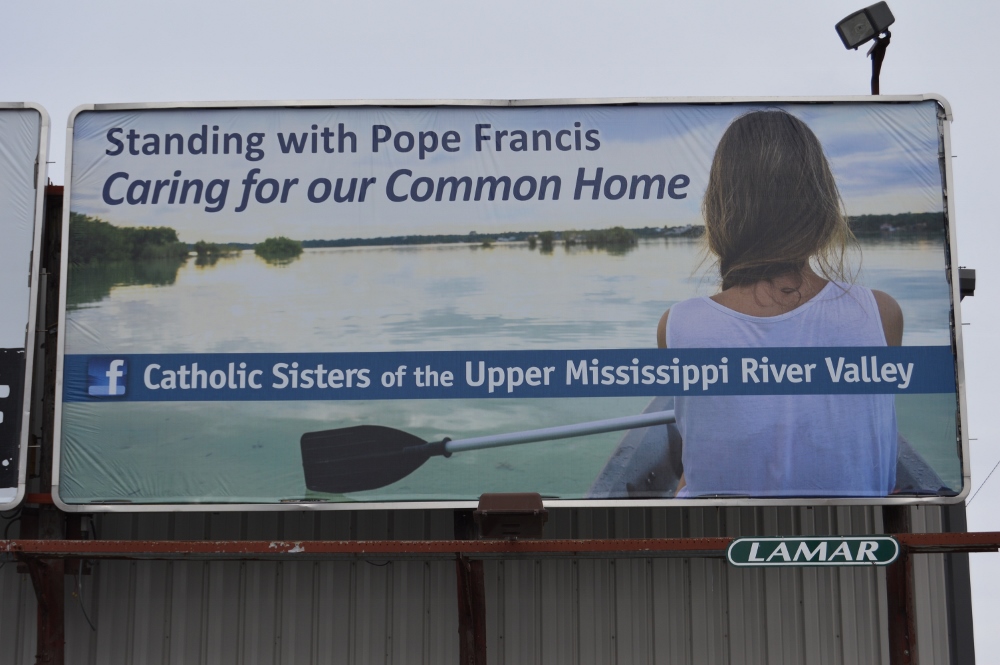