Sitting outside their childhood home on Star Street, three sisters and their cousin chatted as they watched a small parade of children dance past, following a variety of clowns and jugglers and two giant dancing puppets.

An actor dressed as a caveman, hunched over and stomped through the crowd while clutching a walking staff in one hand and a stone in another; he brought smiles to some faces and sent even some of the older boys scurrying with fright.

"When we were young, this street was always full and lively. Children were in the streets. There were shops and offices here," recalled Marlene, 60, one of the three Catholic women who asked that their last name not be used.

Antoinette, 77, the oldest and unmarried sister, still lives in the house where they grew up. "But since the intifada, everything closed. Now usually the street is always empty. Seeing all these people here reminds us of the good days."

Though on the face the Bethlehem Live Festival is a cheerful street festival – originally intended to bring attention to the neglected street and raise awareness about its needs – it also focuses on faith, justice and culture, said Elias D'eis, project manager for the festival.

Workshops and panels such as nonviolence and nonlinear leadership were part of the festival schedule. An art gallery exhibited works by local artists, and an open-mic cafe allowed young local artists and performers to be seen and heard. Eight international bands were to perform on nights of the festival.

D'eis said Bethlehem Live aims to empower local small nongovernmental organizations, artists, youth and community committees to take action in defining their future and addressing some topics that affect them daily but also relate to the global community. The project was initiated in 2013 by the Holy Land Trust, a nonprofit peacebuilding organization in Bethlehem.

"There are more than 128 closed shops on Star Street because tourists are not coming here," D'eis said. "Our responsibility as a community organization is to work for the future, to help the community remember this is their city and to show them their social responsibility."

Last year, some 6,000 people took part in the festival, mostly local Palestinians. This year organizers hoped the June 19-24 festival would attract double that number, with at least 30 percent coming from abroad.

At the entrance to Star Street closer to Manger Square, some of the residents seemed oblivious to the festival. But Khaled Julani, 31, his 4-year-old son grasping an ice cream and his wife wearing a hijab, said the parade was good for the residents.

"Now I am happy; on other days I just walk right through the street on my way to and from work," he said.

Selling poster replicas of some of his street art, Hamoud Abdullah, 24, said the festival was a smart idea.

"They are trying to bring more life here, more happiness in a situation that is so messed up," he said.

Helping out at a pub with walls festooned with world flags in honor of the FIFA World Cup, Ramzi Sadri, a 27-year-old tour guide, said he was willing to miss some of the soccer matches to come to the festival. It was making people happy for a short time, he said, but in the end it would not change their reality.

Completing work on an icon he was painting at one of the open stores used as an art gallery, Ian Knowles, the British director of the Bethlehem Icon Center, said the festival also allowed locals to see all the different talent they had in their city.

"There is so much tragedy and fighting, but there are also good things to celebrate. There are good things happening here," he said.

D'eis said at a time when the Middle East is fraught with divisions and violence, he hoped the festival would help spread the message of peace that should be emanating from Bethlehem, the city of peace, and the message of multiculturalism and the possibility of living in peace.

"We want to open people's eyes to multi-faith and multiculturalism, to open their eyes to different nationalities and the value of accepting each other," said D'eis. "Bethlehem is the city of faith, Christian-Muslim relations here are good. We believe in peace. Bethlehem should be the model where all can come together in brotherhood and love; it should be an example of coexistence among all different faiths and different communities."

Lucy Talgieh, 40, a Catholic, greeted friends as they passed, while she sat across from her mother's shop, which still struggles to remain open on Star Street.

"For us Palestinians, any act which helps us relieve our stress is good. All Palestinians are living in a prison, not only those in jail. For us this is a message of hope," she said. 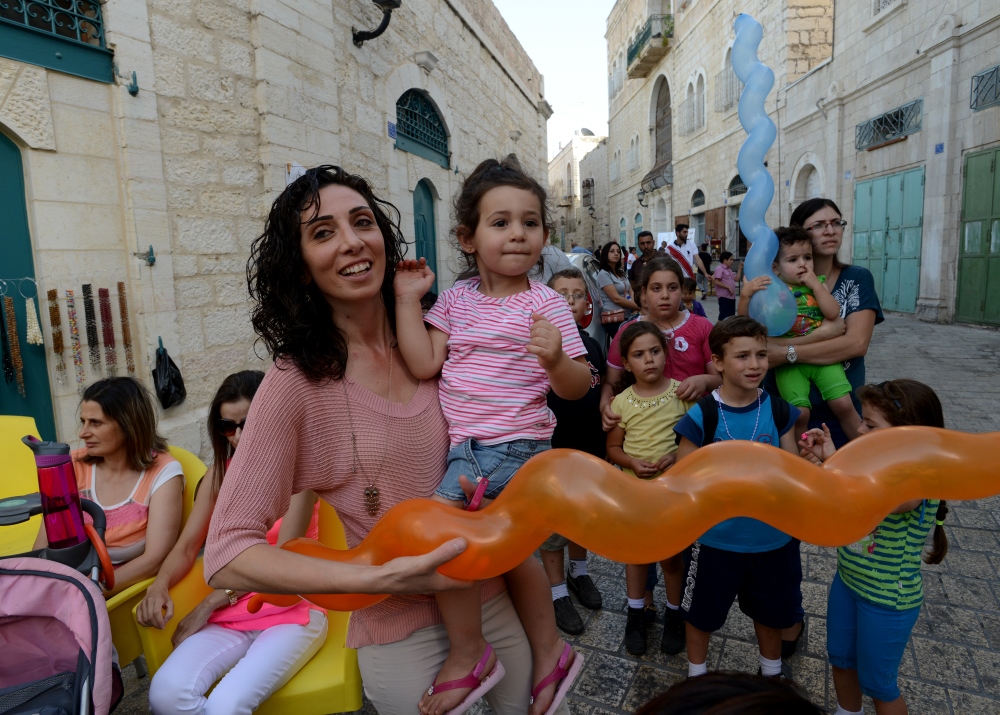 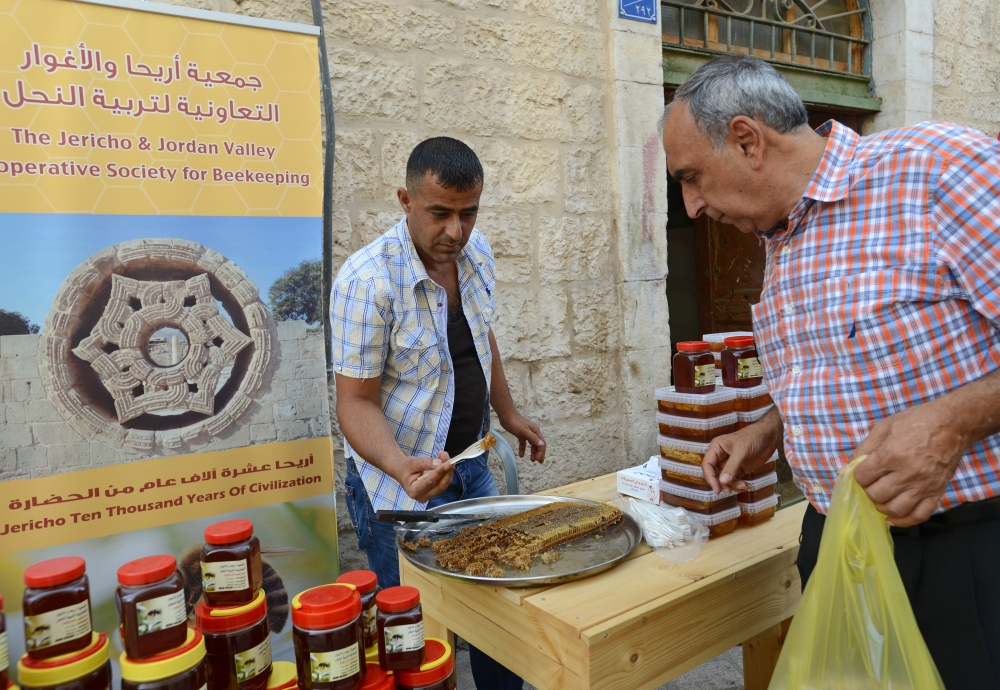 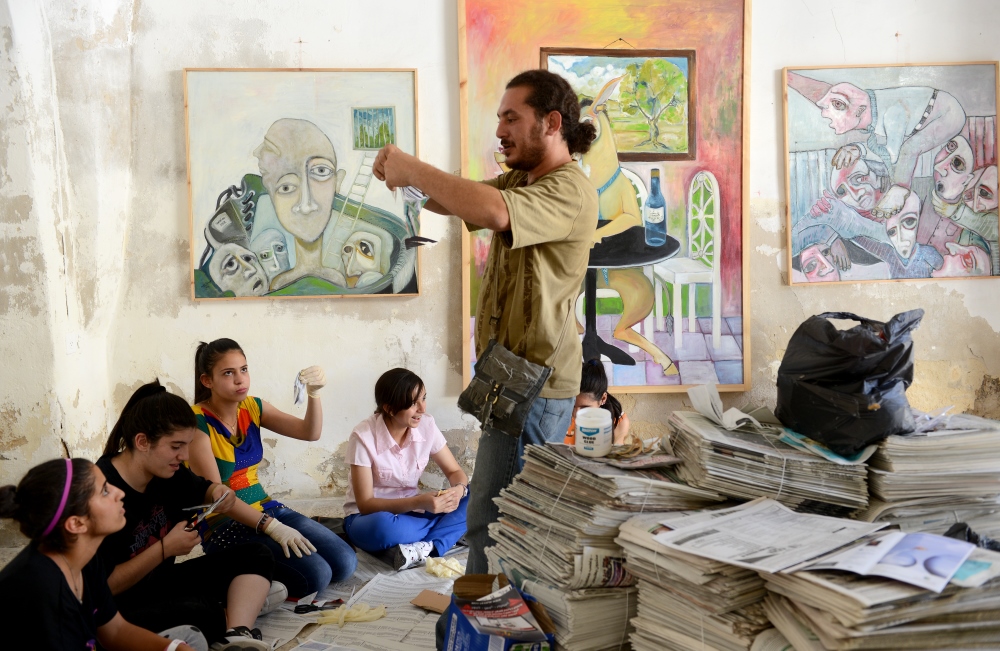