Skip to main content
This story appears in the LCWR 2019 feature series. View the full series.

A year and a half ago, the Catholic Mobilizing Network celebrated Pope Francis' declaration that the death penalty is never justified. Then in July, U.S. Attorney General William Barr announced the federal government planned to resume executions, and any celebrating ended abruptly.

"Now it's a different ballgame — for 16 years we didn't have to worry about [federal executions]," she said.

Murphy was speaking to about 40 sisters and guests at the Leadership Conference of Women Religious' annual Assembly Aug. 15, in a session on why actively fighting capital punishment is so important.

The Catholic Mobilizing Network is a sponsored ministry of the Sisters of St. Joseph, and grew out of the work by St. Joseph Sr. Helen Prejean, author of Dead Man Walking and a tireless opponent of the death penalty. Prejean's latest book, River of Fire: My Spiritual Journey, is a memoir of the years leading up to Dead Man Walking and how she came to focus on social justice issues.

Opposition to the death penalty — even when the issue is personal — is nothing new for Catholic sisters. Sr. Paula Merrill, a member of the Sisters of Charity of Nazareth in Kentucky, and her housemate, co-worker and friend, Sr. Margaret Held of the School Sisters of St. Francis in Milwaukee, were murdered in their home in Durant, Mississippi, but both sisters' congregations and their families publicly opposed capital punishment for the perpetrator. The man later accepted a plea deal for life in prison without the possibility of parole.

Murphy said the group's tactic has been to work state by state, and was paying off: While 25 states still have the death penalty, 21 others do not, and four more have capital punishment on the books but are under a governor-imposed moratorium.

In October 2018, the Supreme Court for the state of Washington declared its capital punishment law unconstitutional, saying it had been applied arbitrarily and with racial bias.

In March 2019, California's governor announced a moratorium on executions, which advocates saw as a huge victory because of the state's political importance. At the time, California had 737 inmates on death row, the most in the Western Hemisphere, according to The New York Times.

In May 2019, New Hampshire became the 21st state to outlaw the death penalty when the state legislature overrode the governor's veto of the bill banning the practice.

"Now we're working to figure out how to address the federal death penalty," Murphy said.

She said there are five federal inmates on death row and each have exhausted their appeals, though it is expected there will be litigation over the lethal injection protocols, the drugs used in the executions, and the way those drugs are obtained.

Even as the group gears up for a federal fight, the state-by-state efforts continue. Murphy said Nebraska, Wyoming and Colorado are expected to be the next states to outlaw capital punishment.

During a question-and-answer period, one attendee said she is a Sister of Providence of Saint Mary-of-the-Woods near Terre Haute, Indiana, where the federal prison is located that carries out executions. The sister said they had been told not to advocate on behalf of the five inmates on death row while legal strategies were worked out.

Murphy said that's because each case is different and each could require very different efforts. That does not mean, however, that sisters cannot lobby against the death penalty in general or the federal resumption of executions.

Advocacy by Catholic sisters is especially important because people often try to make capital punishment a conservative-versus-liberal issue, or a Republican versus Democrat issue, "but it's none of those things," she said.

The Catholic Mobilizing Network's program Mercy in Action Project, emails monthly alerts about upcoming executions and provides resources to pray and ask officials to not carry out the sentence.

"For example, there are two executions scheduled for today [Aug. 15]," Murphy said. "One in Texas, where the inmate got a reprieve, and one in Tennessee that is still going forward. So pray for Stephen Michael West and his family tonight."

Less than four hours later, West was put to death in Tennessee's electric chair, the Tennessean reported, the third inmate to die by this means this year.

But ending the death penalty is not enough, she said. Equally important is restorative justice.

"It's a justice that heals, a justice that unifies," Murphy said. "We're going to be working against the death penalty until it's over. But we're also building something, and we want you to be part of that, too." 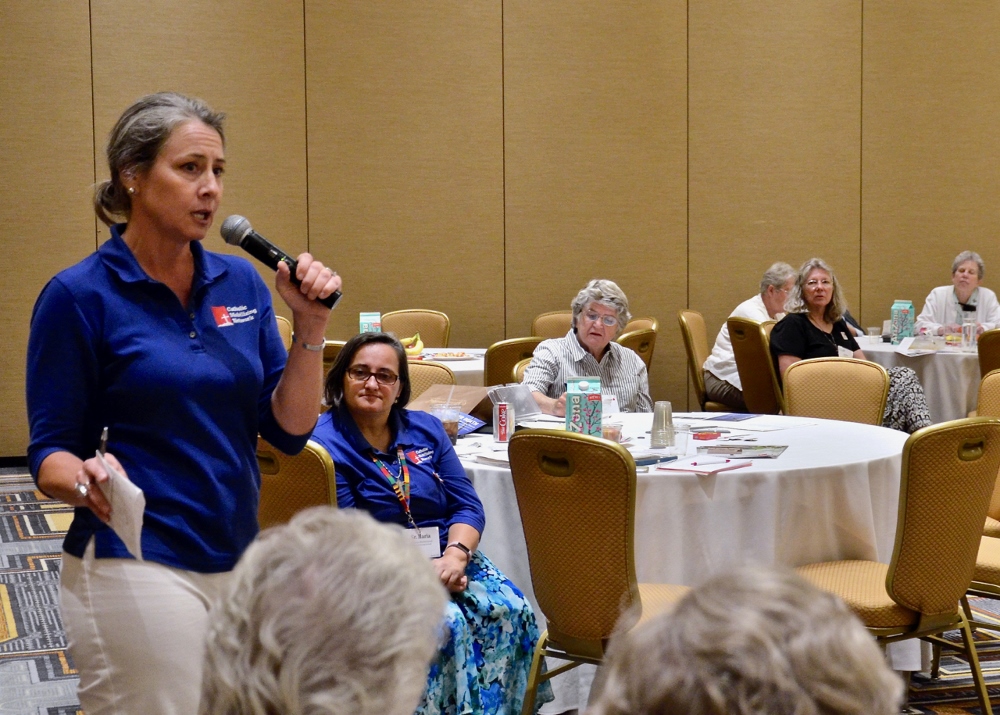