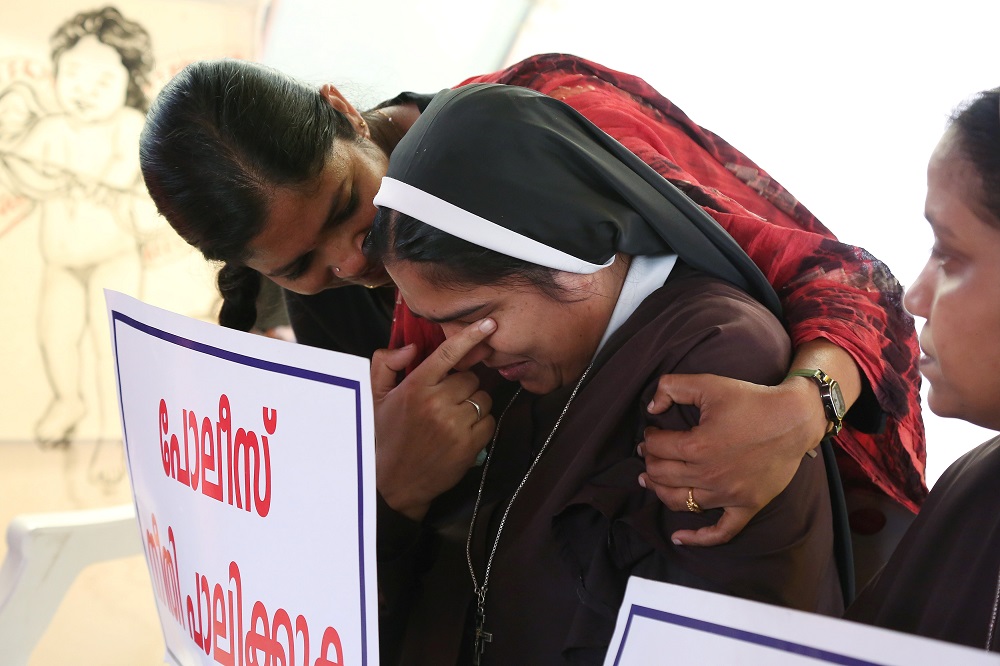 A woman religious is consoled during a Sept. 13 protest in Cochin, India, demanding justice after a nun accused Bishop Franco Bishop Franco Mulakkal of Jalandhar of raping her. (CNS/Sivaram V, Reuters)

Vatican City — The International Union of Superiors General has called on women religious who have suffered abuse to come forward and report it to their congregations and church and state authorities.

"If the UISG receives a report of abuse, we will be a listening presence and help the person to have the courage to bring the complaint to the appropriate organizations," it added in a statement published on its website Nov. 23.

The group -- whose members are 2,000 superiors general of congregations of women religious across the world, representing more than 500,000 sisters -- said it wished to express "deep sorrow and indignation over the pattern of abuse that is prevalent within the church and society today."

"Abuse in all forms: sexual, verbal, emotional or any inappropriate use of power within a relationship, diminishes the dignity and healthy development of the person who is victimized," it added.

"We stand by those courageous women and men who have reported abuse to the authorities. We condemn those who support the culture of silence and secrecy, often under the guise of 'protection' of an institution's reputation or naming it 'part of one's culture.' "

"We advocate for transparent civil and criminal reporting of abuse whether within religious congregations, at the parish or diocesan levels, or in any public arena," it said.

"We commit ourselves to work with the church and civil authorities to help those abused to heal the past through a process of accompaniment, of seeking justice, and investing in prevention of abuse through collaborative formation and education programs for children, and for women and men," it said.

The statement also comes months after police arrested an Indian bishop and charged him with raping a nun.

An Indian nun had accused Bishop Franco Mulakkal of Jalandhar, India, of raping her in 2014 and then sexually abusing her multiple times over the following two years. Mulakkal claims the accusations are baseless. He was arrested Sept. 21 after police investigated.

The nun had made numerous complaints, including to the Vatican, but claimed she had gotten no church response to her allegations at the time. Pope Francis accepted the bishop's request to be relieved of his duties Sept. 20.

The nun had explained in a letter that her abuse had gone on for so long because "I had tremendous fear and shame to bring this out into the open. I feared suppression of the congregation and threats to my family members."

She had said many women and nuns suffer clerical abuse. Silence and inaction on the part of church officials to stem clerical abuse will have a "very adverse effect" on women and result in the church losing its credibility, she said.

Three kings and a tyrant

US presidential candidates must honor the dignity of work