On the first warm and sunny Iowa day in about a week, somewhere around 300 people came to the steps of the State Capitol to hear from the executive director of  NETWORK Sr. Simone Campbell about her vision for democracy and 100 percent civic engagement.

Citing the tour’s theme, “We the People, We the Voters,” Campbell likened voting to “having job interviews for a bunch of politicians.” The idea of this year’s tour is to “create a more perfect union” by engaging people in doing so.

Vice President Joe Biden, a Catholic and longtime supporter of Nuns on the Bus, closed the rally, sharing his support for NETWORK's voter registration drive and for women religious.

"Democracy works best when everyone has a seat at the table," he said, adding that after 12 years of Catholic education at the hands of sisters, he knows they are uniquely equipped to bring about change.

"I know no group of people who bring more passion to what they do," he said.

In The Des Moines Register, Biden supporters in Iowa say he is using this opportunity to connect himself – perhaps with an eye on the 2016 Democratic presidential nomination – to religious leaders who share his economic values.

But for Campbell and the 10 Iowa sisters joining her on the bus (for each leg of the tour, Campbell will be joined only by sisters with a connection to that state), the tour is decidedly non-partisan.

During the rally, Campbell invited two locals to the podium, who shared their opinions about minimum wage and their some other personal experiences. The woman who spoke cited her daughter, who is struggling to find adequate employment – in spite of being well educated – though she does have health insurance, thanks to the Affordable Care Act (Obamacare).

Sisters joining Campbell and her staff for the next few days as they travel to Council Bluffs and, by Sunday, to Davenport, were invited to introduce themselves and ask the audience questions to think about, such as what they value about living in America.

Since 2012, when the nuns first took to the road, Campbell’s refrain has been “We the people,” a message, she says, of empowerment for all Americans, regardless of political affiliation. And this time around is no different. The Nuns on the Bus are aiming for 100 percent voter turnout in the midterm elections this November in an effort to stand up to big money in politics.

The first two iterations of the Nuns on the Bus tour focused on opposing the so-called Ryan Budget and supporting comprehensive immigration reform in 2012 and 2013, respectively. But Campbell likes to say the bus is like Batman, appearing whenever the people need it. And this time, she said, Gotham needs someone to make sure the common person's voice doesn't get drowned out in the political process.

"This year . . . we're about getting you to claim the power that you have and vote," she told the crowd. "This isn't about partisan issues, this is about our democratic responsibility to care for our nation."

And most Americans agree would agree that getting money out of politics is a way of caring for our nation. In a 2012 Washington Post-ABC news poll, 69 percent of respondents, Republican and Democrat, said they believed super PACS should be illegal.

Super PACS, which first became major players in American politics in 2010, are political action committees – hence the term “PAC” – that can raise unlimited sums of money for candidates, but cannot work directly with or coordinate with those candidates.

What they can do is use the 501(c)(4) and 501(c)(6) sections of the tax code to pour millions of dollars into ads and other campaign activities without publicly disclosing who, exactly, contributed to them. In 2012, conservative and liberal super PACS, collectively, spent $609 million on federal elections, according to the Center for Responsive Politics.

In the 2012 general election, Iowa, at more than 70 percent, had one of the highest voter turnouts in the nation. But its status as a critical swing state has made it a target for super PACs and other highly funded political groups hoping to influence the state’s voters.

The super PAC Ready for Hillary, began organizing in Iowa in January, and the conservative Koch brothers’ political arm, Americans for Prosperity, has already launched a “full-scale mobilization” in the Hawkeye State.

Judy Davidson, a self-described "very active" Catholic, is the chair of the Scott County Republican Central Committee and a member of the Iowa Republican Party's central committee. She did not attend Wednesday's rally, but told GSR today that she supports the effort to get Iowans to vote; however, she questions the bipartisan claims of any event that only has a Democrat speak at its kickoff.

"They need to show both sides," she said.

The Nuns on the Bus went on a voter registration/door knocking campaign this afternoon, before hosting a ticketed fundraiser that starts at 6:30 p.m.

The sisters will spend the next four days in Iowa, before moving on Minnesota on Monday. Sunday evening, Davenport Bishop Martin Amos will present Campbell with the Pacem in Terris Peace and Freedom award, previous recipients of which include Dorothy Day and Martin Luther King Jr.

For the complete Nuns on the Bus tour schedule, click here. To stay up-to-date with the Iowa leg of the tour, check back here at the Global Sisters Report, where our U.S. sister liaison, Jan Cebula – a Franciscan sister from Clinton, Iowa – will be blogging daily from the bus. Later, GSR will share photos and updates from NETWORK and other sisters until the end of the tour in mid-October.

Follow the developments using the orange the Nuns on the Bus series tag at the top of this story to see all the related items, or bookmark this link. 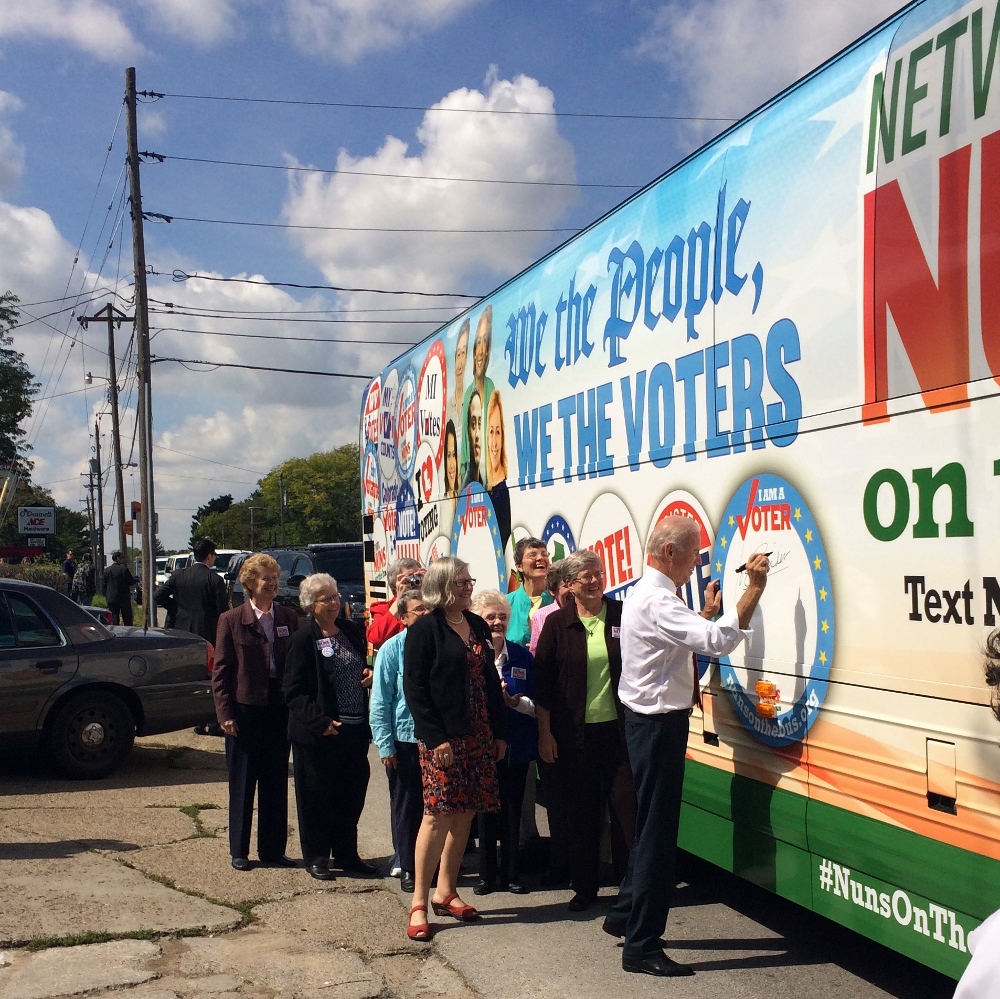 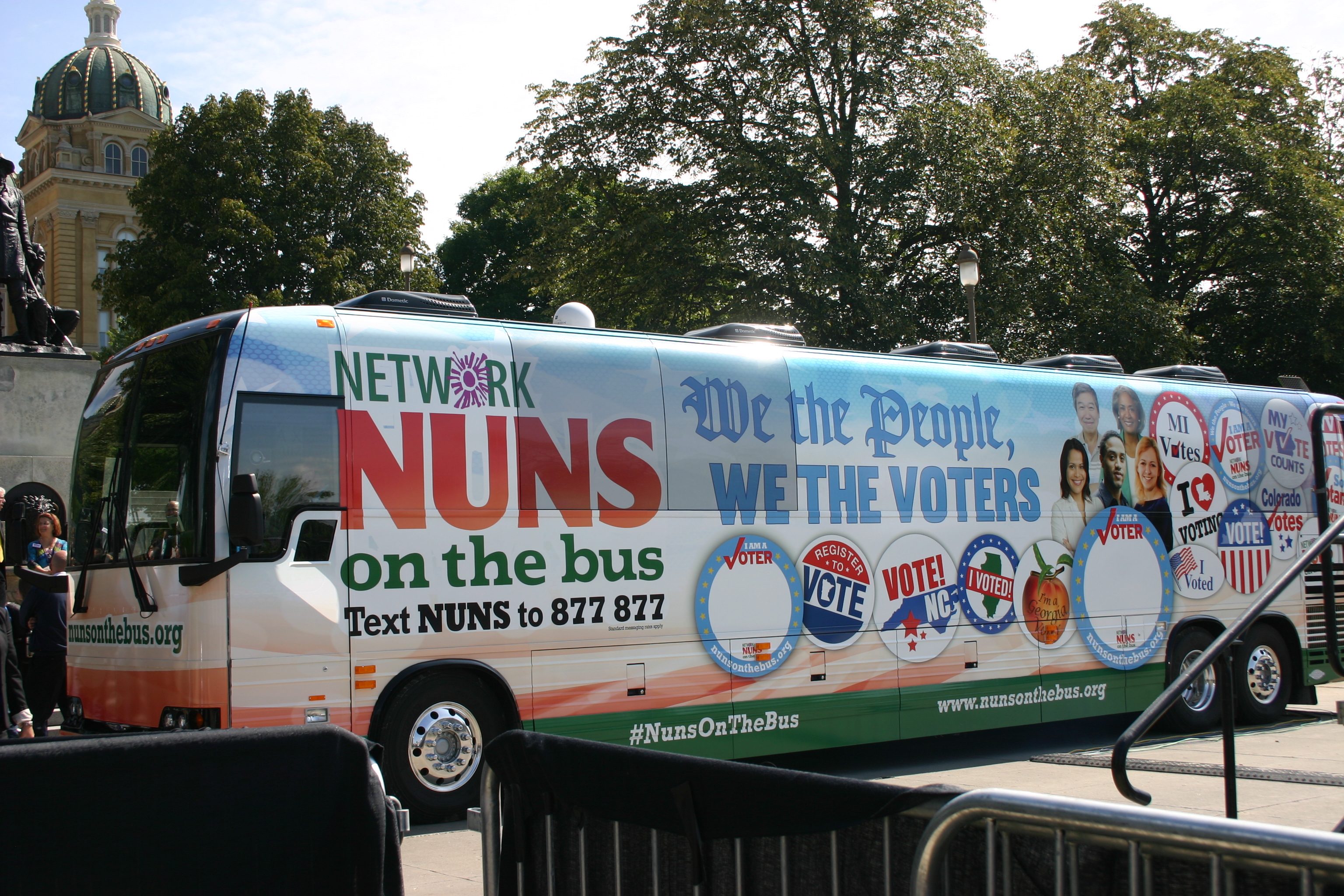 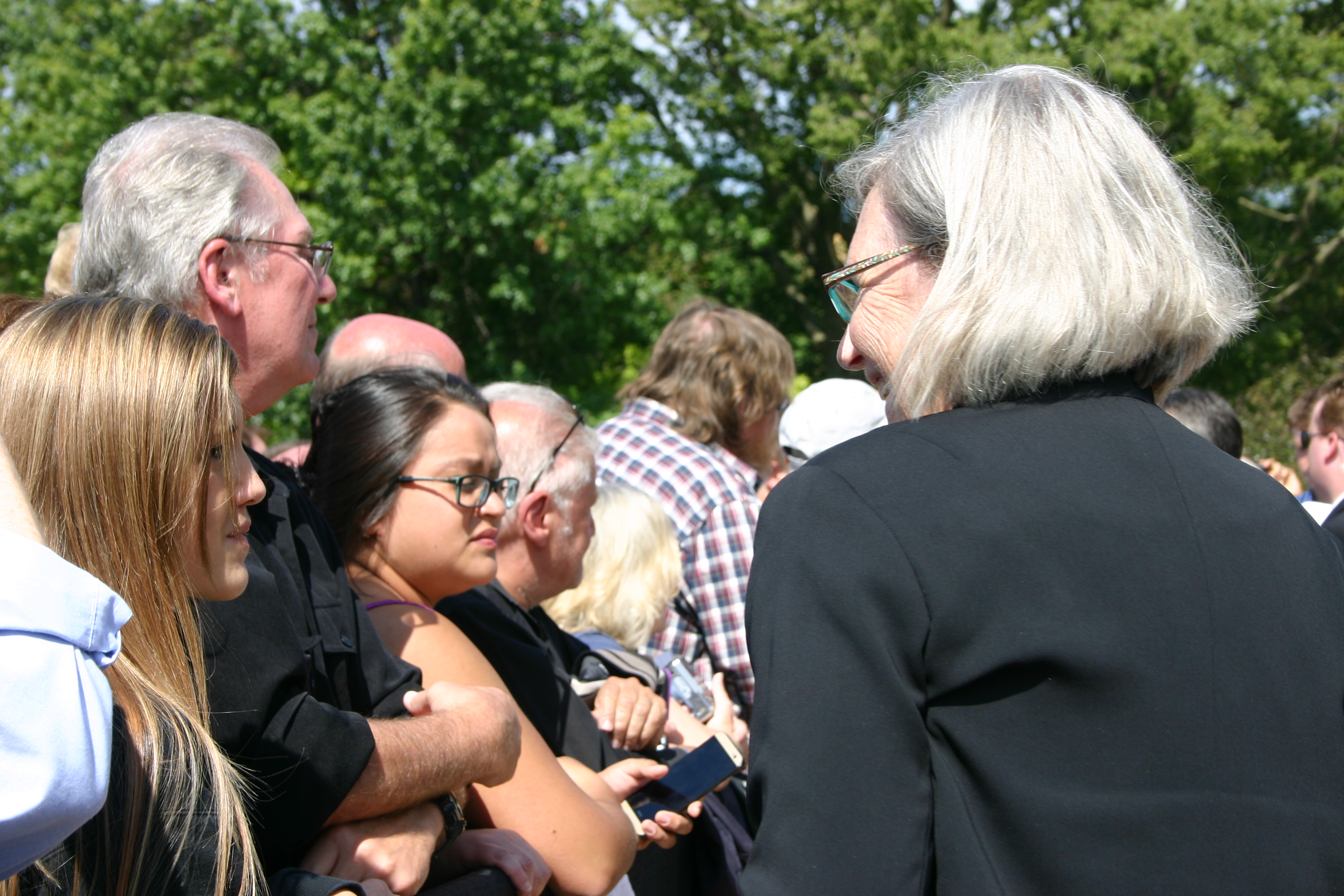