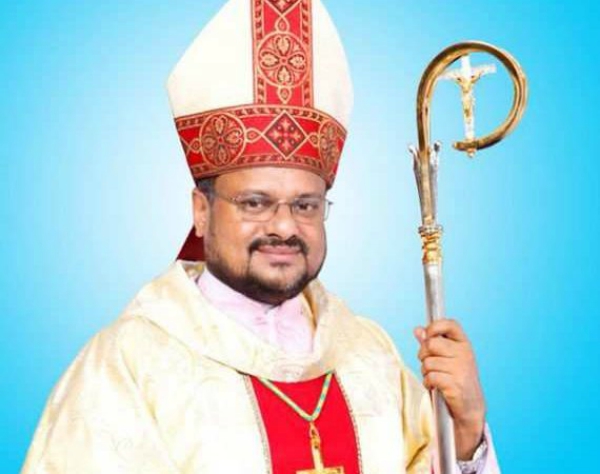 Bengaluru, India — More than 80 Catholic sisters and other leaders have urged that a bishop accused of raping a nun in 2014 be removed from his position in the Indian state of Punjab.

The sisters were part of a group of 167 signers that also included priests, brothers, laity and church-related social activists. They asked Cardinal Oswald Gracias of Mumbai and Archbishop Giambattista Diquattro, apostolic nuncio to India, to advise Pope Francis to relieve Jalandhar Bishop Franco Mulakkal of his pastoral duties.

"When a man who represents God to people, is a sexual offender, faith in the God he represents is shaken to the core," the group warned in a July 12 letter to Gracias. A similar letter was sent to the nuncio.

The allegedly abused sister, who is in her 40s, belongs to the Missionaries of Jesus in the Jalandhar Diocese, where she was a former superior of the convent.

She complained to police June 29 of being raped in May 2014 and then sexually abused multiple times over the following two years by Mulakkal, 54, who is patron of the congregation. She alleges that much of the abuse took place at a guesthouse on congregation grounds in Kuravilangad in Kerala, the home state of both the sister and the bishop.

A few days before the nun filed the complaint, Mulakkal also made allegations that the nun and her brother were threatening him after he took disciplinary action against her. The diocesan public relations officer said she was removed from her posts after Mulakkal ordered an inquiry into her alleged actions.

Kerala police are investigating the allegations and counter-allegations.

Senior priests in the diocese say the cases stem from infighting over the years after the sister refused to join a campaign against a priest who opposes Mulakkal, according to media reports.

The Catholic leaders and activists wrote, "With the accused bishop continuing to remain in his position as Bishop of the Jalandhar diocese, it will continue to erode the faith of the people in the credibility of the Church to implement its policy of zero tolerance" in sex abuse matters.

The coverage of arguments and counter-arguments has "turned the Church into an object of ridicule" in the country, the letter to the bishops noted.

The letter to Gracias, president of the Catholic Bishops' Conference of India, requested he advise the bishops to publicize and create adequate awareness of the conference guidelines issued in 2017 to deal with sexual harassment in the workplace. A similar outcry came last spring and summer when several sex abuse cases involving clergy arose in India. This is the first sex abuse case involving a bishop in India.

In addition, the group called for greater attention to be paid to the choice of candidates for the priesthood as well as to their formation in the seminary.

The letter cited patriarchal attitudes that promote "condescension and even aggression towards those considered 'inferior,' " and clericalism that is perceived to place the ordained outside the country's civil law.

According to the letter, sexual abuse is ultimately not about sexuality or celibacy, but about the gross misuse of the disproportionate power assigned to clergy.

The signers of the letter urged Gracias to ensure that every diocese in India complies with Indian criminal law to address abuse cases of minors and sexual harassment of women in the church.

The letter asked that policies to prevent such abuse cases be disseminated to the faithful, church stakeholders and related institutions and that such policies be implemented.

Sr. Jessy Kurian, a lawyer of the Supreme Court of India, said that because Mulakkal is the patron of the religious congregation to which the alleged rape victim belongs, other members of the nun's congregation fear speaking openly about the case because of the potential for reprisal.

Kurian, a member of the congregation of St. Ann of Providence, Secunderabad, wrote in a statement to the media that, in order to have an impartial and independent inquiry and investigation, Mulakkal should either resign or be suspended by church authority.

Mulakkal has responded publicly that he is innocent and the truth will come out in the police investigation.

"I know that I am innocent, but that is not enough. Bringing out the truth is also my responsibility now," he told a TV reporter.

He dismissed reports that he may leave the country to evade arrest.

"All this is propaganda. I am here in the diocese carrying out my daily duties," he said.

Bringing joy to children in Vietnam through a Christmas festival

Not in my name