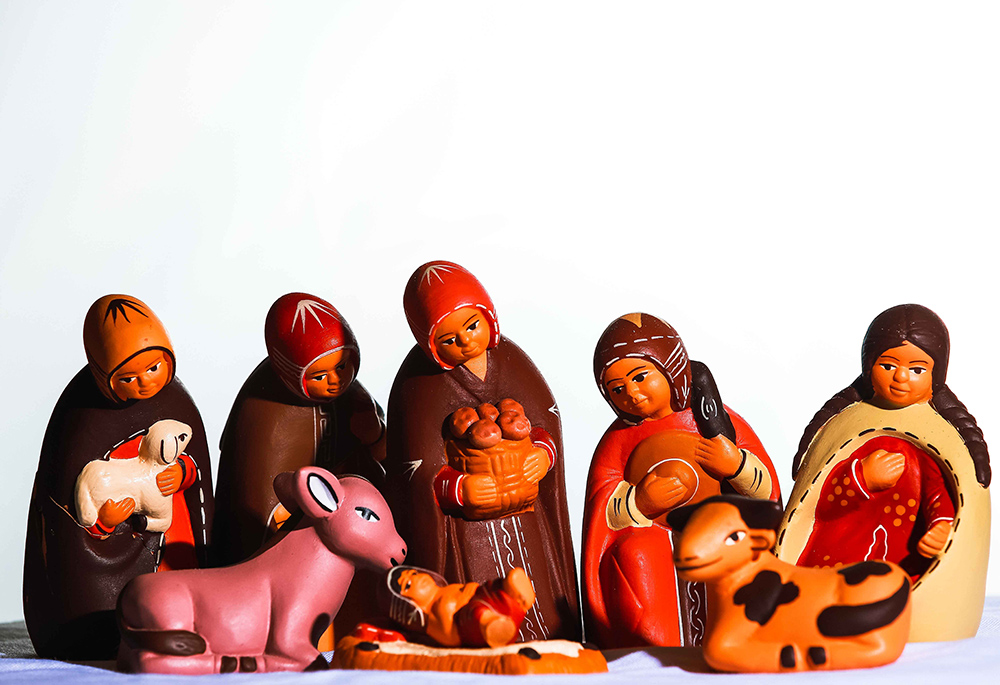 Since the first day of Advent, I have been reading, listening and reflecting on the mystery of God becoming human, the Immanuel "God with us" — the first Christmas!

I understand that Christmas is not about jingle bells, plum cakes, glittering costumes, sumptuous parties, or seven-star palaces. It is about the refugees and migrants; the internally displaced; the struggle of Elizabeth to have a child; night watch shepherds; the martyrdom of innocent children; homeless wanderers; and daily wage laborers. For me, this is the true meaning of the Nativity of Christ, the first Christmas Day.

Christmas is a great feast not only for Christians but for the whole world, for humanity at large. Almost everyone celebrates Christmas, regardless of any differences: caste, creed or language. Unfortunately, today this great feast is commercialized and the importance of the feast of God becoming human — and one among us to unite us in his love — is lost. It has become a mere social celebration.

I would like to reflect more on the deeper meaning of Christmas so that I may realize and be able to celebrate the coming Christmas in a meaningful way.

Every nation wants to be powerful, which is one reason why we witness prolonged wars in some parts of the world. When power meets power, the outcome is a power struggle. When a powerful nation helps a poor nation, the outcome is alienation: the powerful nation looks upon the vulnerable as one who depends on them, and subjugates them by meeting their needs and never allowing that nation to come into equal relationship. As a result, when power meets vulnerability, the outcome is alienation, separation and dependence.

That's what we find in the birth of Jesus. God — so powerful, almighty and omniscient — meets the vulnerable human beings enslaved by the powerful. God comes down and becomes one among us to save and set us free — from every form of slavery and sin.

That is why Christmas becomes a feast of vulnerability to experience freedom, dignity and the grace of God in and through Jesus. This feast invites us to become vulnerable, to join with the vulnerable. This is the entire message of Jesus.

Jesus is born in Bethlehem as a vulnerable, helpless baby. Mary and Joseph came to the stable when there was no place for them; Mary and Joseph gave birth to the child Jesus, wrapped him in swaddling clothes, and placed him in the manger. God becomes vulnerable in meeting us who are weak.

To understand the real meaning of Christmas we need to reflect from the perspectives of those who were related to the first Christmas in history.

For God the Father, Christmas is giving as we find in the Scripture, "For God so loved the world that he gave his only Son" (John 3:16). Hence, giving is Christmas. Today, the giving culture is slowly getting lost. We need to learn to give.

For Jesus, Christmas is self-emptying: "Who, though he was in the form of God, He did not count equality with God. … Rather, he emptied himself, taking the form of a servant being born in the likeness of man" (Philippians 2:6-7).

Christmas for the Holy Spirit is empowerment, as in, " 'The holy Spirit will come on you, and the power of the Most High will overshadow you. Therefore the Holy One to be born will be called the Son of God' " (Luke 1:35). We are to empower ourselves with God to empower others.

Self-surrender is Christmas for Mary: "And Mary said, 'I am the handmaid of the Lord. May it be done to me according to your word' " (Luke 1:38). If she had not surrendered, Christmas would not have been a reality.

For Joseph, Christmas is obedience. Joseph did not understand what was happening and what God was telling him through the angel but obeyed God's will (Matthew 1:19-24). When we live a life of obedience God becomes a reality in our life.

For shepherds, Christmas is living out of a life of simplicity. The shepherds were ordinary people living in hilly regions. They listened to the angel (Luke 2:8-16) and went ahead to meet Jesus.

Christmas is humility for the wise men, the Magi. They were humble enough to accept the little child in the manger as their king (Matthew 2:11).

So Christmas is giving, self-emptying, empowerment, self-surrender, obedience, simplicity, and humility: In short, it is the feast of vulnerability. God is compassionate. Compassion inspires justice, equality and fraternity. So let us learn to be one with the people who are helpless, downtrodden, rejected, neglected and poor. Let us take this message and celebrate this Christmas with its true meaning.

I pray that the virtues of the first Christmas guide my life as I accompany the vulnerable in an attempt to build his kingdom here on Earth.