Editor's note: Don't miss the slideshow at the end of the story for more photos from Kuchinate.

Sr. Azezet Kidane, a Comboni Missionary sister originally from Eritrea, thought the worst part of the trauma for the Eritrean asylum seekers she counsels in Israel was already behind her. Through Kidane's work with Physicians for Human Rights, she uncovered thousands of incidents of torture among asylum seekers who were kidnapped along their route from Africa.

But the Eritreans in Tel Aviv, already struggling with poverty, isolation and discrimination, and some who were slowly healing from torture, now face yet another hurdle: Prime Minister Benjamin Netanyahu's aggressive and controversial plan to deport African asylum seekers. Deportation is set to begin within weeks.

Netanyahu, buoyed by a conservative-led government, charges that the migrants came to Israel for economic reasons and they threaten Israel as a Jewish and democratic state.

On Monday, Netanyahu made the dramatic announcement that the state will work with the United Nations High Commissioner for Refugees to resettle half of the asylum seekers in third countries such as Canada and Sweden in exchange for permanent status for the remaining asylum seekers. But only hours later, he froze the deal and then outright canceled it after pushback from right-wing activists, throwing the asylum seeker community further into uncertainty.

The deportation plans, originally slated to start during Passover, the Jewish holiday that marks the liberation from slavery in Egypt, have garnered widespread condemnation from diaspora Jews, Holocaust survivors and left-wing activists in Israel.

"The people of Israel — a country built by those who fled Hitler's ovens and the oppression of Arab countries where they were treated as second-class citizens — understand the injustice of the government's policy in our bones," wrote Rabbi Susan Silverman in an op-ed in The New York Times.

There are 38,000 African migrants and asylum seekers in Israel, according to the Israeli government. About 72 percent are Eritrean and 20 percent are Sudanese. The rest are from Nigeria, Côte D'Ivoire and other places.

Eritrean asylum seekers came to Israel via Sudan and Egypt, fleeing a harsh dictator and compulsory military service that can last up to 40 years for men. Sudanese asylum seekers fled genocide in Darfur and fighting between Sudan and South Sudan. Both groups face danger and possible death if they are deported to their country of origin.

The vast majority arrived in Israel between 2006 and 2012. In 2014, Israel completed construction of a 150-mile electronic fence along the border with Sinai, which brought the illegal immigration to a complete halt. Netanyahu boasted about its effectiveness on Twitter.

About 7,000 asylum seekers passed through kidnappers' torture camps in the Sinai desert just a few miles from the Israeli border. In June 2012, Hilary Clinton, then U.S. secretary of state, honored Kidane with a Trafficking in Persons Report Hero Award for helping expose the existence of the Sinai camps by collecting 1,500 testimonies for Physicians for Human Rights.

In the camps, victims were sometimes tortured while they were on the phone begging family members in Israel and Eritrea to pay ransom money.

After Israel built a fence along the border with Sinai, stopping both illegal immigration and the torture camps, Kidane hoped time would start to heal the wounds of the deeply traumatized Eritrean population in Israel.

But over the last six months, Netanyahu has pursued plans to deport thousands of Eritrean and Sudanese asylum seekers. He says the Africans are economic migrants and illegal infiltrators. Human rights groups and asylum seekers have countered this claim, pointing out that they fled dangerous situations and their lives are in danger if they return.

Netanyahu wants to send the asylum seekers to Rwanda and Uganda, which many asylum seekers have rejected because those countries are too close to the areas they fled in fear for their lives. Netanyahu has offered a payout of $3,500 to every migrant who accepts "willing deportation" and a reported $5,000 to the Rwandan government for each deportee it accepts.

Starting in May, the government wants to deport about 600 people per month for the first year. The looming deportations have thrown the asylum seeker community into chaos, fear and depression, since no one knows what will happen in the coming months.

"I thought it would be worse at the beginning, but after so many years have passed, [the trauma] is actually worse now," said Kidane. "Because before, they suffered, but they shared problems with some hope, with some vision. They said, 'We will settle, we will manage, we will forget.' But the policy of the government of Israel has increased their stress about their situation."

The Eritrean women Kidane counsels are not under immediate threat of deportation, as Netanyahu and the Interior Ministry said that women and children would not be deported from Israel at this stage. But they are still reeling from uncertainty, as well as grappling with the threat that thousands of unmarried men could be deported. These men are the breadwinners in the community who help pay the rent for apartments in south Tel Aviv where asylum seekers live crowded into small rooms.

"Before, they were telling me the story of the past," said Kidane, "but now there's the problem of every day worrying. They want to be resettled to a third country because they see no future here. They cannot settle, they cannot progress, because they do not know what will happen tomorrow."

Kidane counsels women one on one or in groups during crocheting sessions at Kuchinate, which means "crochet" in Tigrinya, the language of Eritrea. Kuchinate is an economic empowerment project where women learn to crochet colorful cloth baskets. The U.N. High Commissioner on Refugees, the Comboni Missionaries, and several European Christian organizations support the project.

The women at Kuchinate are "the most vulnerable of the vulnerable" because they cannot work for various reasons, said Kidane, known more casually as Sister Aziza. Some have health problems stemming from their time in Sinai torture camps; others are single mothers whose husbands died on the journey or are still in Eritrea. Some women have psychological issues, including depression, which in some cases has required hospitalization in a psychiatric ward.

Abretet, 28, an asylum seeker from Eritrea, has been coming to Kuchinate for the last eight months. Her 5-year-old son, Miracle, has undergone brain surgery three times, and Abretet wasn't able to keep a job while taking him back and forth to medical appointments. "One day I'd come and then one day I couldn't come. I couldn't keep any work," she said. Every week she crochets two to four baskets, which brings in about $100, her only income.

Two days a week, when she can, she comes to the Kuchinate office in an industrial area of south Tel Aviv to crochet with the other women. "We work together here, this place belongs to all of us," she said. "Sister Aziza and Diddy [Mymin Kahn, an Israeli psychologist who co-founded Kuchinate with Kidane] talk to us about our problems; they help us with psychology. Here you can forget your problems. When I'm here, I'm learning something new, and that takes time. But I can say, 'OK, this is what I'm doing' ... and that way I don't feel so bad."

The informal group therapy is an essential part of the healing process because many women feel uncomfortable, in the beginning, with one-on-one counseling. "We talk together, we drink coffee, we speak about our problems," said Kidane. "They realize all of them have the same worries."

"In the beginning, when I was interviewing people, people said, 'Thank God, I'm alive, I'm in the Holy Land, I will be OK, I will work, I will survive, I will heal,' " said Kidane. "But now it has become worse."

Kidane cited challenges such as an Israeli law, in effect since May 2017, that requires asylum seekers to deposit 20 percent of their paycheck to a special fund. The money is returned to them only when they leave the country. They also face the impending deportations and the ongoing confinement of asylum seekers who refuse to leave and are transferred to prison in the Negev desert.

"The torture is now in the background, but the trauma is manifesting itself as not being able to cope with this situation," said Kahn. Many of the women are dealing with long-term illnesses, disabilities, psychiatric issues, or children with disabilities and emotional issues.

"For survivors of torture, their resilience is dependent on the community around you also being resilient," she said. "Now, the resilience is harder because there's no social services, there's no health care, and they're really tested. Their whole ecology, their whole networks are beginning to collapse. They're feeling really hopeless."

Kahn said the vast majority of asylum seekers are desperate to leave Israel, where they feel unwanted and shunned. But they want to go to a third country where they will be afforded proper protection and security until they can return to their homes in Eritrea. This isn't possible in Rwanda or Uganda, which have refused to recognize deportees from Israel as refugees, meaning they cannot obtain social services or work permits.

Netanyahu has vowed to "give back south Tel Aviv to Israelis." The vast majority of asylum seekers, up to 90 percent, according to police statistics, live in the poorest neighborhoods of south Tel Aviv.

Neve Sha'anan, the neighborhood that absorbed the most newcomers, had crumbling infrastructure before the wave of asylum seekers arrived. Now the neighborhood, originally planned for 6,000 people, has 35,000 residents. It is the most crowded and impoverished part of Tel Aviv. A small group of vocal neighborhood activists has hung signs in the area stating, "Rehabilitation begins with deportation."

Prime Minister Netanyahu has visited the neighborhood on multiple occasions in an effort to shore up support among Israel's conservative voters, his main network. Culture Minister Miri Regev said south Tel Aviv's Israeli residents are "refugees in their own country" and has compared asylum seekers to "a cancer in our bodies."

Many residents and organizations have denounced the possible deportations, with demonstrations drawing tens of thousands of people in Jerusalem and Tel Aviv. Pilots, doctors, restaurant owners, students and other groups have petitioned the government to stop the deportations. American Jews have also roundly condemned the plan, and the Anti-Defamation League has compared it to the United States' threat to deport Dreamers, immigrants brought to the U.S. illegally as children.

Despite the gestures of support from groups that come to visit Kuchinate to hear the stories of the women and purchase baskets, many of the 180 women who crochet there are still struggling with uncertainty.

"All of these challenges don't help them go ahead with life," said Kidane. "It's always a threat, they cannot settle. It has become a burden."

After eight years in Israel, Kidane knows the work she is doing is important, but she is also frustrated. "At least they have someone to talk to, but the main problem is that we can't solve their issues," said Kidane. "We can't say, 'Oh, they will never deport your cousin.' We cannot say that. We tell them this, not to frighten them, but because it's better to see the truth."

"We tell them not to see the darkness, but the light of the situation they're in," she said. "We cannot solve the government policy, so we have to tell them to hope against hope.״ 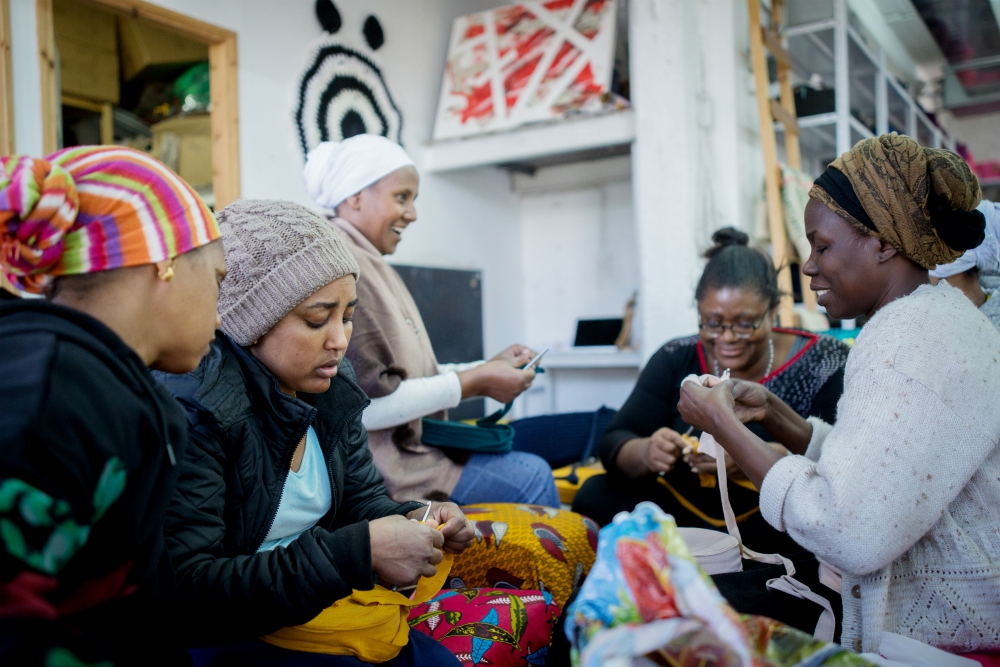 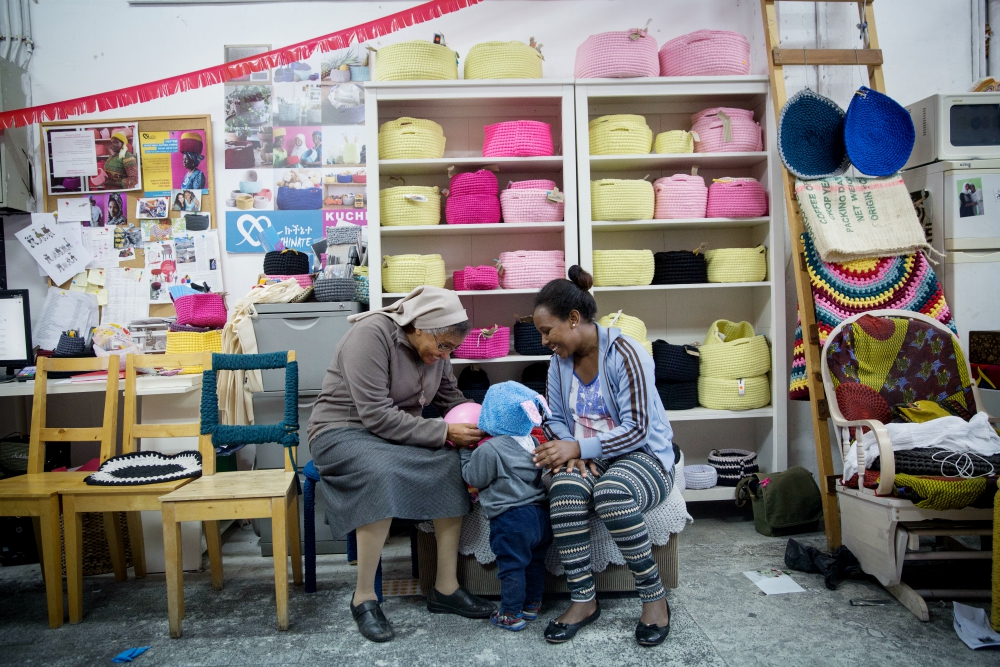 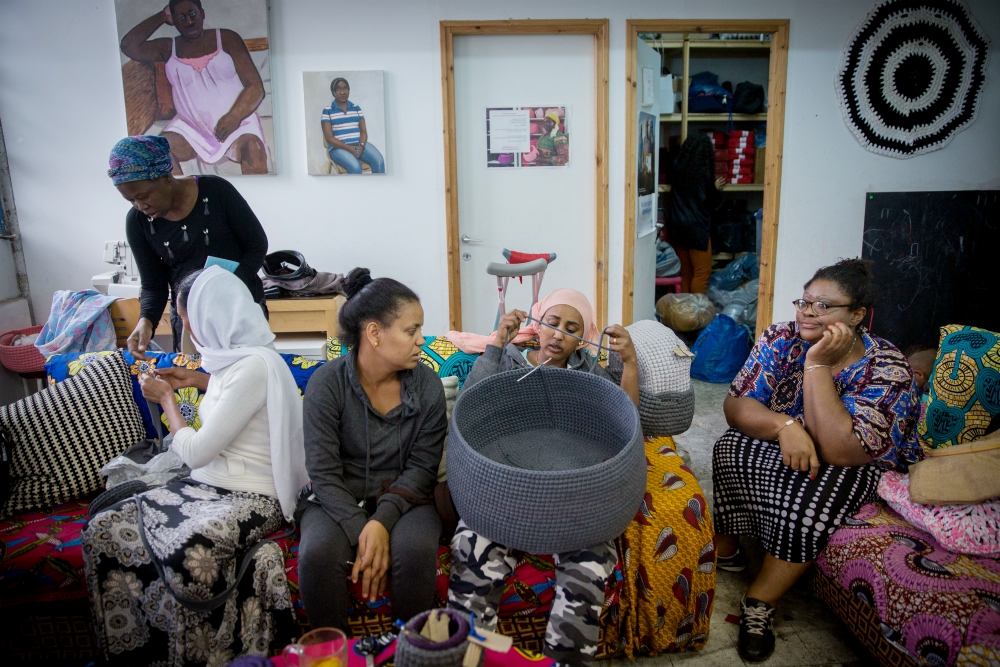 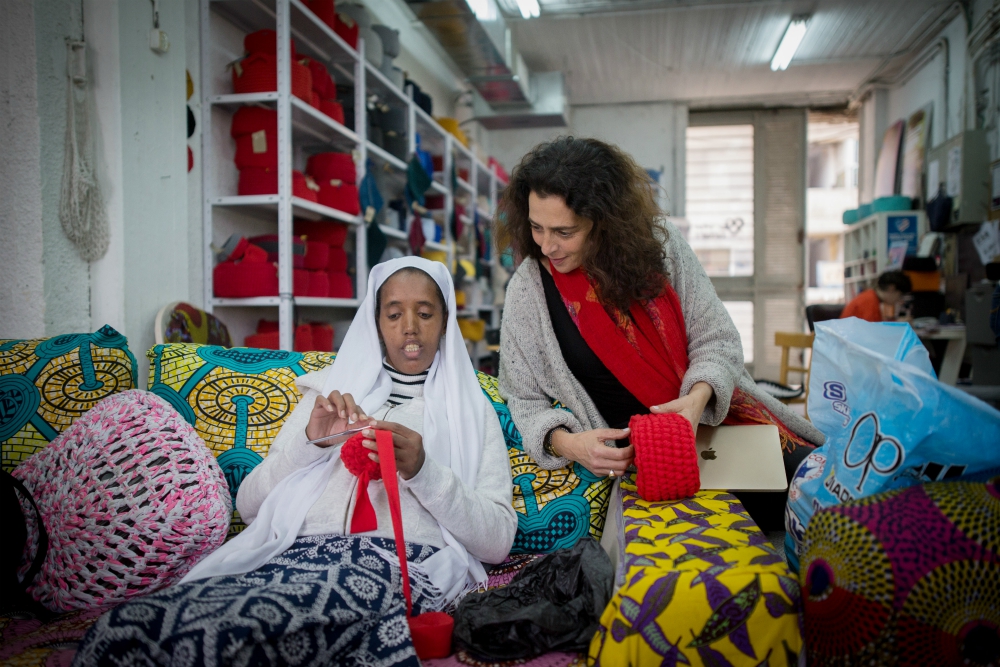