The United Nations shone a spotlight on the worldwide migrant and refugee crisis this week as the global body held its first summit on refugees and migrants and issued a declaration that U.N. member states are committed to enhancing the protection of migrants and refugees.

U.N. leaders are calling the Sept. 19 summit and connected events — including a meeting of global leaders called by President Barack Obama — historic but also necessary given the record number of people moving because of wars, political unrest, economic challenges and climate change.

UNHCR, the U.N.'s refugee agency, said a record 65.3 million people were displaced last year, compared to 59.5 million the year before.

At side events to the official U.N. summit, religious leaders said the focus of attention must not only be about the flow of migrants from the Middle East but elsewhere, too, including from Mexico and Central America into the United States.

"While Pope Francis has shone a light on the faces of [Middle East] migrants in Europe, in the United States, we see similar faces," Dominican Sr. Donna Markham, the president and CEO of Catholic Charities USA, said at a Sept. 19 event sponsored by the Holy See's U.N. mission.

"Our Catholic Charities agencies across the country are welcoming refugees from all parts of the world and extending love and support to each frightened human being who comes to us desperately in search of safety and dignity," she said. "These are courageous and resilient human beings."

The cornerstone of the week's events was the U.N. General Assembly's first summit on refugees and migrants, in which 193 member states adapted what is being called the New York Declaration.

The declaration commits the states to, among other things: protecting the rights of refugees and migrants, regardless of their status; ensuring that refugee and migrant children are receiving an education shortly after their arrival in new countries; and responding to and preventing sexual and gender-based violence. The declaration also calls on member states to work toward "ending the practice of detaining children for the purposes of determining their migration status."

The U.N. member states also committed to an international conference on migration in 2018 that could lead to a framework for "safe, orderly and regular migration" and develop guidelines to assist migrants "who are in particularly vulnerable situations." A global pact on migration, the declaration said, could help achieve "a more equitable sharing of the burden and responsibility for hosting and supporting the world's refugees."

In his remarks at the summit for leaders Sept. 20, Obama said he was heartened by the U.N.'s focus on migrants. But he said it was "still not enough, not sufficient for a crisis of this magnitude," adding the focus had to mark "the beginning of a new global movement where everybody does more" to help migrants.

This includes "more nations donating more assistance and accepting more refugees," the president said. "More institutions and NGOs finding new ways to deliver aid. More businesses contributing their expertise. More faith groups making this work their own. More young people demanding action. More states and cities and towns coming forward and saying, 'Yes, we will open our communities to our fellow human beings in need.' And more pressure on those countries that are willing to perpetrate violence on their own citizens in pursuit of power that carries such a heavy human toll."

However, an interfaith coalition of religious institutions criticized Obama and other world leaders for not doing enough to end a key driver in the global movement of refugees: the Syrian civil war.

At a Sept. 21 news conference held at the Community Church of New York and in connection with the U.N.'s International Day of Peace, the coalition called on world leaders to do more to end the Syrian conflict, which has killed an estimated 500,000 and caused millions to flee Syria for other Middle Eastern countries and Europe.

"It is long past time for war and violence to stop and to advance the hard work of finding a new way forward, toward a future where all Syrians can live together in peace and justice," the coalition said in a statement, which included support from Pax Christi as well as Maryknoll and Franciscan advocacy groups. "Leaders must use a just peace approach: scaling-up trauma healing, restorative justice, unarmed civilian protection, and transformative dialogue with all stakeholders involved in the conflict to build a sustainable just peace."

"All faith traditions teach clearly to care for those who are in need, welcome refugees, and call for nonviolent resolutions to conflict. People of moral conscience have been actively responding to the needs of Syrians affected by the crisis in Syria, neighboring countries and around the world," the statement said. "Of particular concern has been the impact of Islamophobia both on the global fronts of violence and the domestic politics of refugee welcome in Europe and the United States of America. The global community can and must do much more. "

In an interview with GSR, the Rev. Kristin Stoneking, who heads the Fellowship of Reconciliation, said while the Obama administration should have done more during the 2011 Arab Spring to support grass-roots groups committed to peaceful solutions in the Middle East, it is still not too late "to find a nonviolent solution" in the region.

She and the Rev. Jim Winkler, who heads the National Council of Churches, said ending the flow of U.S. weapons to the region would be a first step in helping end the violence.

"Weapons lead to killing," which leads to long-term trauma that requires "hundreds and hundreds of years of healing," Stoneking said.

At the Sept. 19 Holy See event, held at the U.N., Cardinal Pietro Parolin, the Vatican's secretary of state, said while "migration has always been with us, it is becoming an unprecedented phenomenon in our days," underlining the "worrying fact that so many of the large movements of refugees and migrants these days are involuntary, caused by situations of conflict and violence, persecutions and discrimination, poverty and environmental degradation."

"It is even worse when we consider that, during their journey, migrants and refugees face the dangers of trafficking, starvation and many forms of abuse, and upon arriving at their destination, rather than finding a safe haven, they find mistrust, suspicion, discrimination, extreme nationalism, racism and a lack of clear policies regulating their acceptance," Parolin said.

The cardinal hailed the work of religious institutions that for centuries have "played important roles in responding to the needs of refugees and migrants."

"Local faith communities, both Christian and others, are generally attentive to the protection of people and serve as first responders to refugee movements across borders and to those internally displaced," he said. "In environments characterized by fear, violence and suspicion, they provide a human approach and immediate assistance for the basic necessities of life."

That was a theme Markham took up, noting that in the border community of McAllen, Texas, Catholic Charities of the Rio Grande Valley "has been on the front line in providing families arriving each day with the food, clothing and shelter they need to survive. In the first four weeks of operation during the height of the crisis, the Sacred Heart Parish church in McAllen in conjunction with Catholic Charities provided support to over 3,000 immigrants."

She noted that in getting to the United States, those from Mexico and Central America "face a harrowing journey of predation by human traffickers: physical and sexual abuse and violence at every stage of trip."

Once they arrive in the United States, "their struggles are clearly not over," Markham said. "Unaccompanied children face detention and placement in shelters or foster care and potentially years of uncertainty as their asylum claims are adjudicated.

"While many of these children likely have legitimate asylum claims, most will be forced to prove those claims and challenge deportation without the assistance of an attorney," she said. "Catholic Charities agencies across the south and west of the U.S. are engaged in assisting them in any way they can."

Observations by Markham and others struck a chord with Sr. Margaret O'Dwyer, who helps represent the Daughters of Charity at the U.N., and her colleague, Sr. Michelle Loisel, who heads the congregation's migration, anti-trafficking and anti-slavery work.

Both sisters acknowledged the seriousness of the Syrian situation. But they told GSR that responding to the needs of migrants along the U.S.-Mexico border also deserves attention, particularly in the United States.

"They come to the United States not looking for a dream because they're afraid they're going to be killed," O'Dwyer said of migrants who are fleeing violence in countries such as Honduras and Guatemala.

"How can we improve the migrant asylum rate? How can we stem the tide? How can we get at the root causes" of migration from Mexico and Central American countries?

"I'm frustrated," she said. "Something has to happen, and happen as soon as possible." 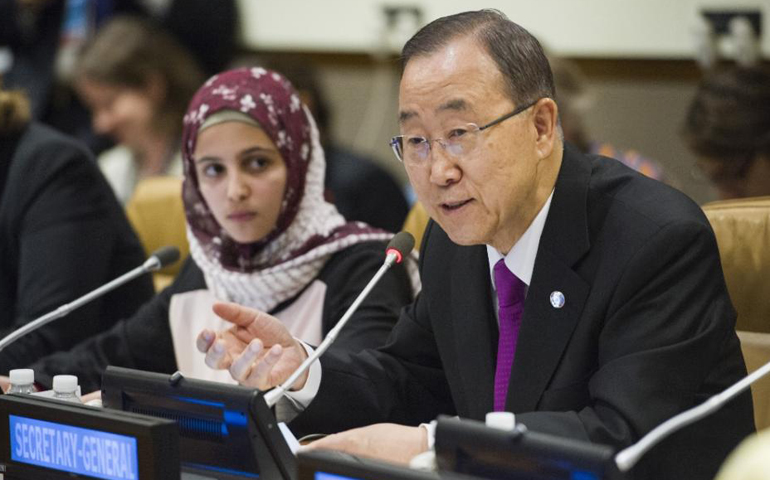 U.N. Secretary-General Ban Ki-moon, right, speaks at the U.N. Summit for Refugees and Migrants on Sept. 19. At his side is Muzoon Almellehan, a young Syrian refugee recently resettled in Newcastle, United Kingdom. (U.N. photo) 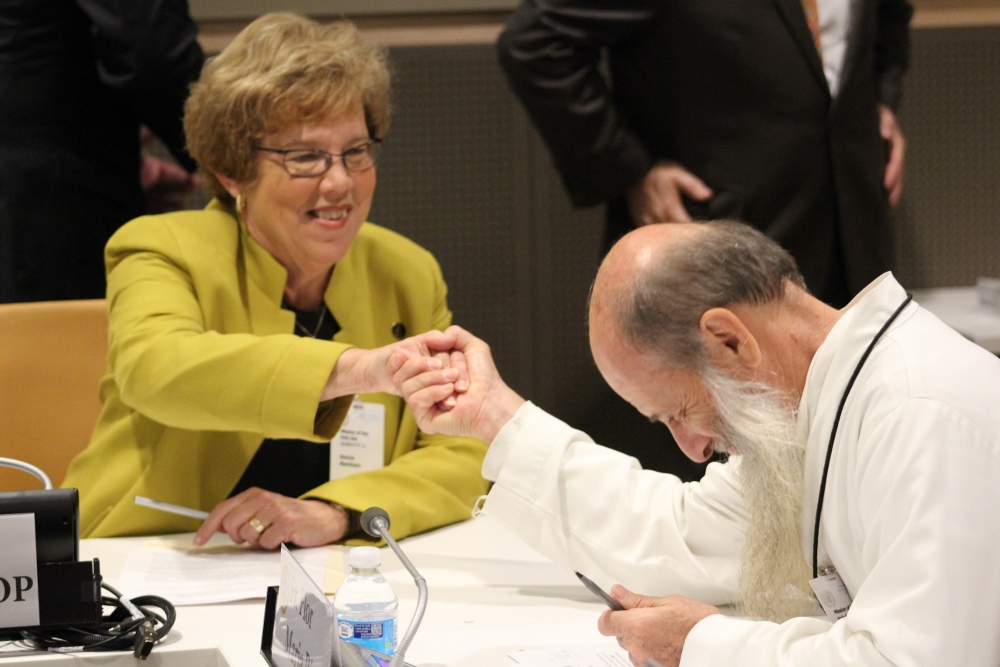 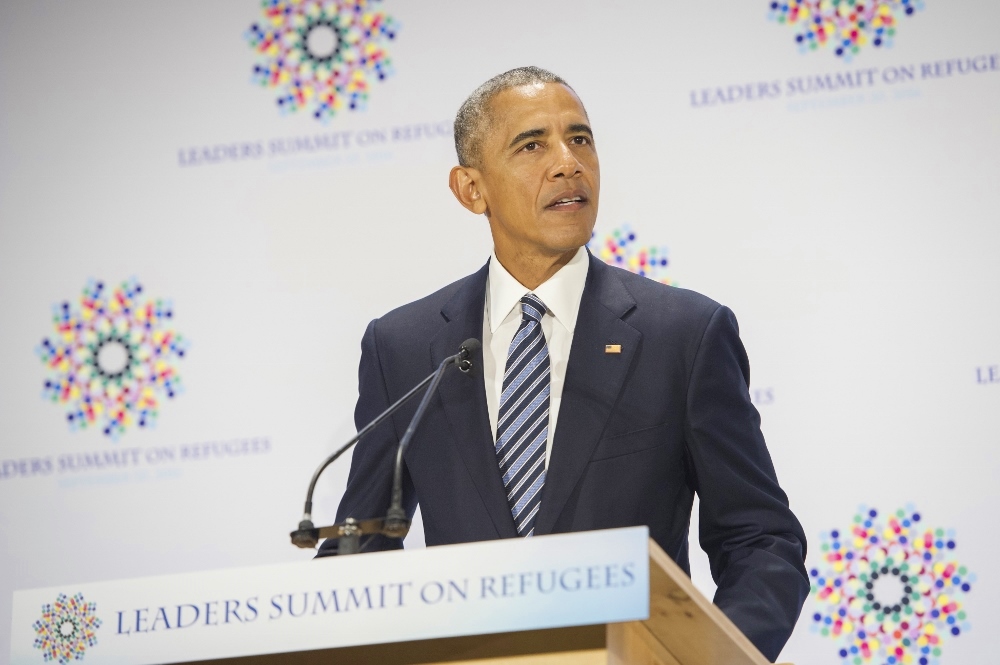 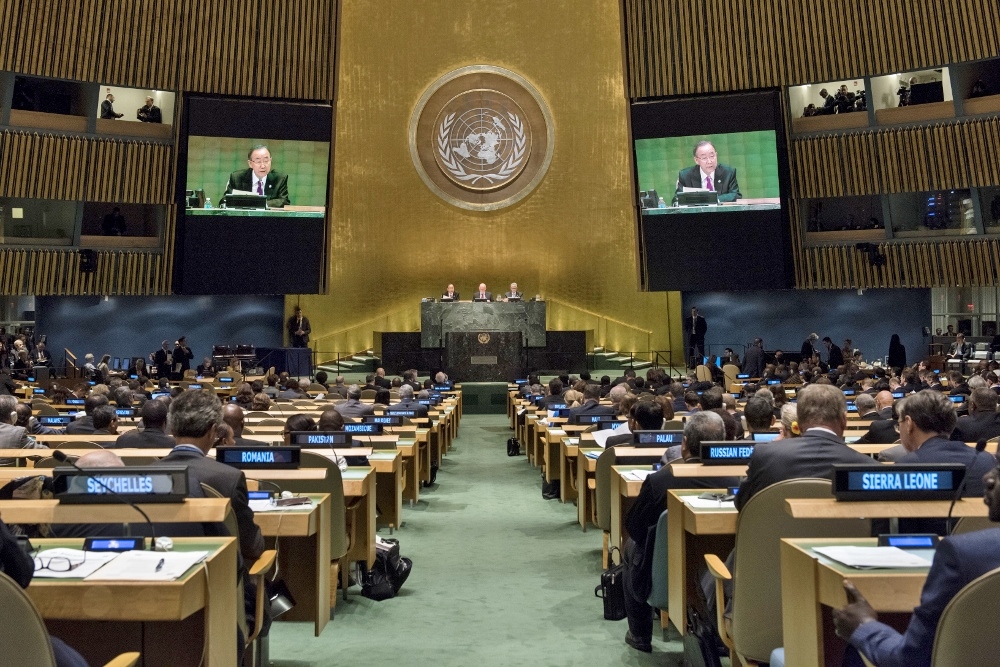 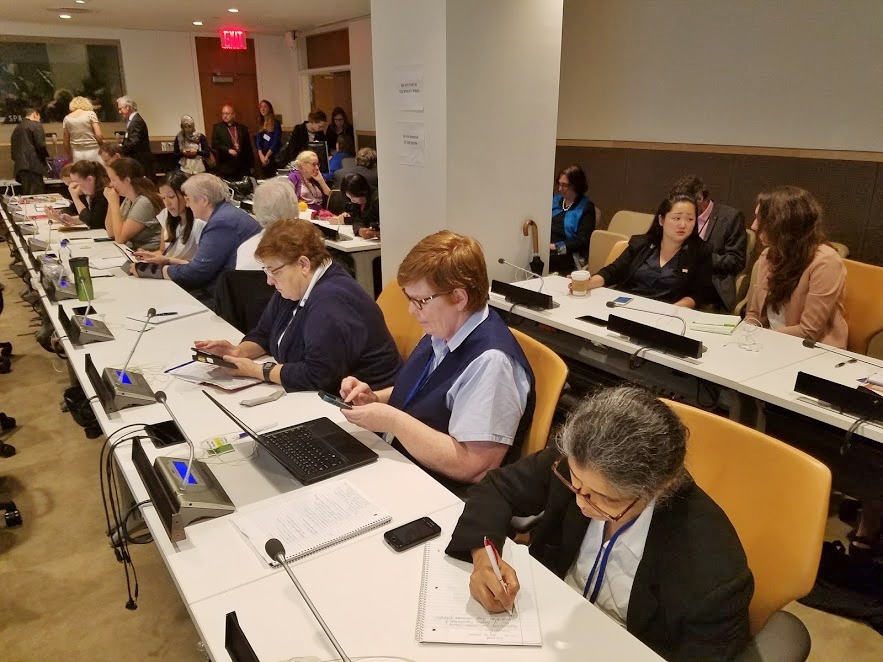 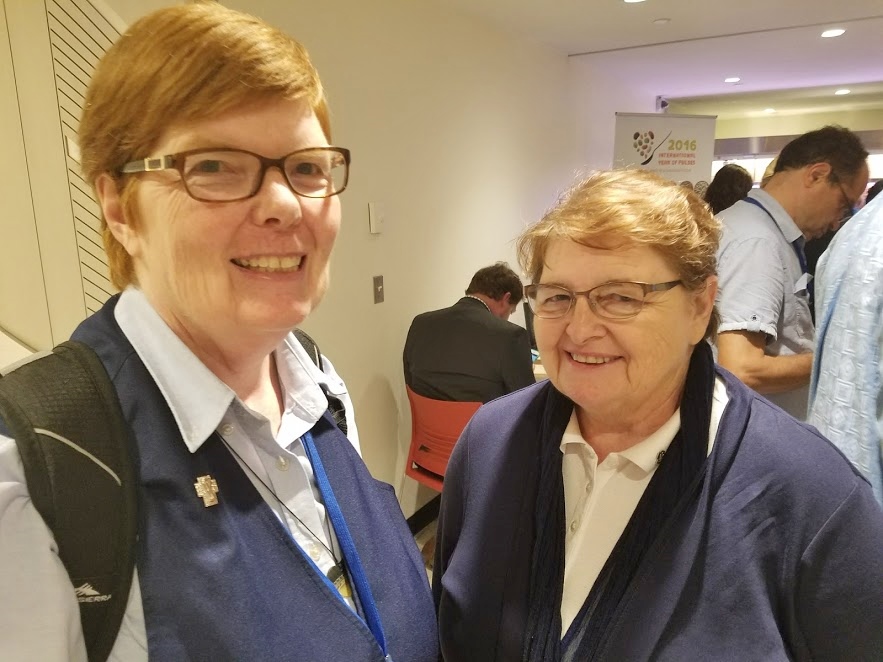 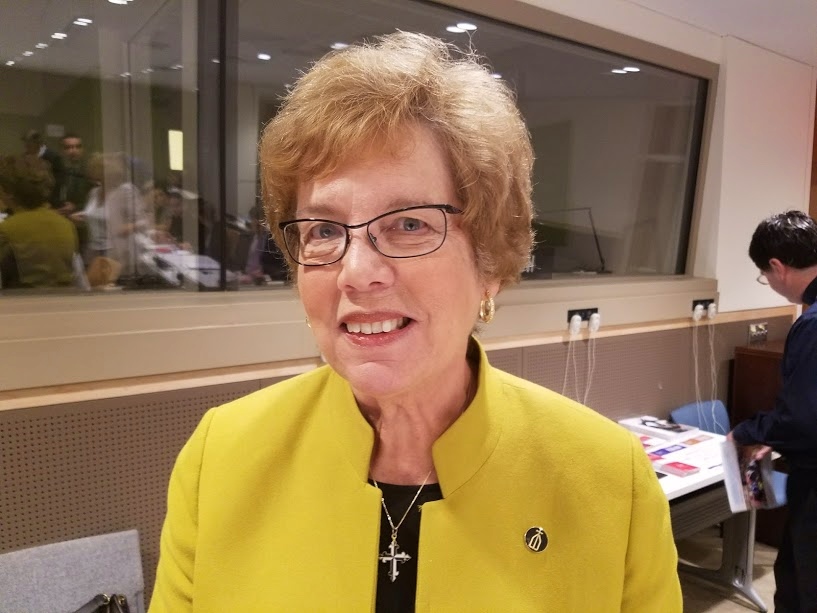