Catholic sisters, church leaders and United Nations officials are hailing the adoption of a U.N.-sponsored global compact on migration they say offers a framework for more humane treatment of migrants, though also expressing disappointment that a number of countries did not approve the agreement or attend the international conference that led to its adoption.

While acknowledging that the spirit of international cooperation the compact represents is facing serious challenges, Sr. Winifred Doherty, who represents the Congregation of Our Lady of Charity of the Good Shepherd at the United Nations, told GSR in an interview the fact that 164 countries approved the pact at a meeting Dec. 10 in Marrakech, Morocco, is reason enough to celebrate.

"It was amazing that during these days that multilateralism is under threat, that it (the compact) got done at all," she said. "We should celebrate that 164 countries approved it."

Support for the compact by congregations and others involved in advocacy for migrants come as members of the United Nations General Assembly approved another agreement on refugees, called the "Global Compact on Refugees," on Monday, Dec. 17.

181 countries adopted the refugee compact with Hungary and the United States voting against it. The Dominican Republic, Eritrea and Libya abstained, the United Nations News Service reported.

Filippo Grandi, who heads the UN's refugee agency, UNHCR, hailed the historic agreement as a sign of global solidarity with refugees.

"In this world of ours, which often turns it back to people in need, that has shamefully politicized even the pain of exile, that has demonized and continues to demonize refugees and migrants and sometimes even just foreigners, this compact, in synergy with the other compact, the compact on migration, can really represent tangibly, a new commitment to international cooperation," Grandi said Monday, the day before the United Nations marks International Migrants Day, as quoted by the U.N. News Service.

Both compacts, stemming from the 2016 New York Declaration that resulted in the international negotiations, set general guidelines that signatory countries will try to follow. However, neither compact is a formal treaty; states approving the compacts are only pledging to support the documents' suggested guidelines. Both agreements direct international cooperation in the wake of the current the global wave of migration, in which 68.5 million people worldwide have been displaced.

The United Nations defines refugees as those "outside their country of origin for reasons of feared persecution, conflict, generalized violence, or other circumstances that have seriously disturbed public order and, as a result, require international protection." The U.N. notes, "While there is no formal legal definition of an international migrant, most experts agree that an international migrant is someone who changes his or her country of usual residence, irrespective of the reason for migration or legal status."

The migration compact consists of 23 objectives that include minimizing the factors "that compel people to leave their country of origin;" ensuring "that all migrants have proof of legal identity and adequate documentation;" and enhancing the "availability and flexibility of pathways for regular migration."

The migration agreement is garnering more attention from religious congregations and non-governmental organizations in part because the bulk of negotiations over the last two years occurred at the U.N.'s headquarters in New York City, where there are more congregations and NGOs working than in Geneva, where the U.N.'s refugee agency is based, and where much of the work on the refugee pact took place.

"Migration is upon us. It's like climate change," Maryknoll Sr. Marvie Misolas, the representative of the Maryknoll Office for Global Concerns at the U.N. who attended the Dec. 10-11 meetings in Marrakech and related events for nongovernmental organizations.

"We can't stop it. We have to deal with it in a more humane way," Misolas told GSR in an interview.

U.N. officials were at pains to say that the migration compact — whose formal name is the "Global Compact for Safe, Orderly and Regular Migration" — is non-binding and does not impose international policy on sovereign states. Nor does it give migrants rights to enter any country at will.

Saying that many falsehoods about the compact had spread in recent months, U.N. Secretary-General António Guterres termed the agreement "a framework for international cooperation, rooted in an inter-governmental process of negotiation in good faith," he said, as reported by the U.N. News Service.

The compact affirms the human rights and dignity of migrants, a fact underlined by the fact that the compact — called the Marrakech Compact — was formally approved as the United Nations marked the 70th anniversary of the 1948 Universal Declaration of Human Rights on Dec. 10.

In urging the compact's approval at Marrakech, Guterres told gathered representatives nations noted "it would be ironic if, on the day we commemorate the 70th anniversary of the Universal Declaration of Human Rights, we would consider that migrants are to be excluded from the scope of the Declaration," as reported by the U.N. News Service.

While hailing the migration compact as a needed step in international cooperation on migration, and saying the agreement could have enormous impact on the lives of millions, Canadian diplomat Louise Arbour, the U.N.'s special representative of the secretary-general for international migration, expressed frustration weeks before the compact's adoption that a number of countries that had been involved in compact negotiations reversed course and said they would not sign it. These included Austria, the Czech Republic, Hungary and Poland. The United States earlier announced it would not sign the compact, declaring that the pact would violate U.S. sovereignty and immigration policy.

Italy, which has welcomed thousands of refugees in recent years, announced in late November that it would not attend the Morocco conference and that its parliament would have to debate the agreement.

"I think it reflects very poorly on those who participated in negotiations," Arbour told the U.N. News Service in an interview that appeared Nov. 27. "It's very disappointing to see that kind of reversal so shortly after a text was agreed upon," he added. U.N. members approved the final text of the migrant compact on July 13; talks on the global compact on refugees concluded July 6 in Geneva.

Cardinal Luis Antonio Tagle of the Philippines, in an opinion piece that appeared Dec. 4 in the Jesuit magazine America, appealed to governments withdrawing their support of the compact.

"In an interconnected world, global issues such as climate change, poverty and the persecution of ethnic and religious minorities call on us to work together," Tagle wrote. "They will not go away if we ignore them or put up walls. When governments look beyond their immediate needs and electoral demands, they begin to protect and promote the common good, which is at the heart of any flourishing society."

In his remarks on Dec. 10 in Marrakech, Cardinal Pietro Parolin, representing the Vatican, said the Holy See "is convinced that the enormous challenges that migration poses are best faced through multilateral processes rather than isolationist policies." He called the global compact a "significant advance in the international community's shared responsibility to act in solidarity with people on the move, especially those who find themselves in very precarious situations."

Sr. Justine Gitanjali Senapati, who represents the Congregations of St. Joseph at the United Nations and who attended the Morocco meetings, said the compact's "people-centered" approach is in line with Catholic social teaching's emphasis on "the human dignity and liberty of persons, including the weakest and most vulnerable groups, like migrants."

The compact, she told GSR, recognizes that migrants' human rights must be affirmed, and that countries acting to protect the rights of migrants "will alleviate much of the deplorable situations of the migrants. The compact needs to be implemented 'on the ground' through international human rights law, which protects and promotes human life and dignity."

Teresa Blumenstein represented UNANIMA, a United Nations-based coalition of Catholic congregations focused on concerns of women, children, migrants and the environment, at the Morocco meetings. She noted that the negotiations for the compacts were enormously complex, with much attention on possibly widening the definition of a refugee to include those crossing borders because of climate-induced or environmental devastation.

Nation-states were divided over the issue, Blumenstein told GSR; those opposed said it may be "impossible to identify such individuals and verify their claims."

"It is true that this identification process is challenging due to the fact that the factors motivating an individual to migrate are typically many and intertwined and unfolding over a prolonged period of time," Blumenstein said, though she does not think this "challenge is insurmountable."

In the end, she said, "fear of financial commitments is the ultimate reason for states' opposition to adopting any legal obligations to assist or protect the environmentally displaced."

One curious part of the debate over "environmental refugees" is that "many negotiators of each global compact argued that the issue of protection for the environmentally displaced was the mandate of the opposite compact and pushed that it be excluded from the one on which they were working."

As a result, the "notion of protection for this population was thus in danger of falling through a gap between the (compacts') texts," Blumenstein said.

While the issue of "environmental refugees" is ultimately addressed in a section on possible practices in the migration compact, she said, "these protections can easily fall through the cracks in implementation of the compacts and will require constant monitoring and evaluation from civil society."

Misolas said "stepping up" implementation of the migration compact will depend on policies at national levels to assist migrants. But, she added, nations must also implement social policies that don't give people a reason to uproot their lives in the first place. "We have to deal with this all in a humane way. People move because they want better lives," she said.

Doherty said even with some countries pulling out of the compact, seeing wide international cooperation on an issue of great concern, particularly as Christmas nears, is hopeful. "Advent," she said, "is about hope." 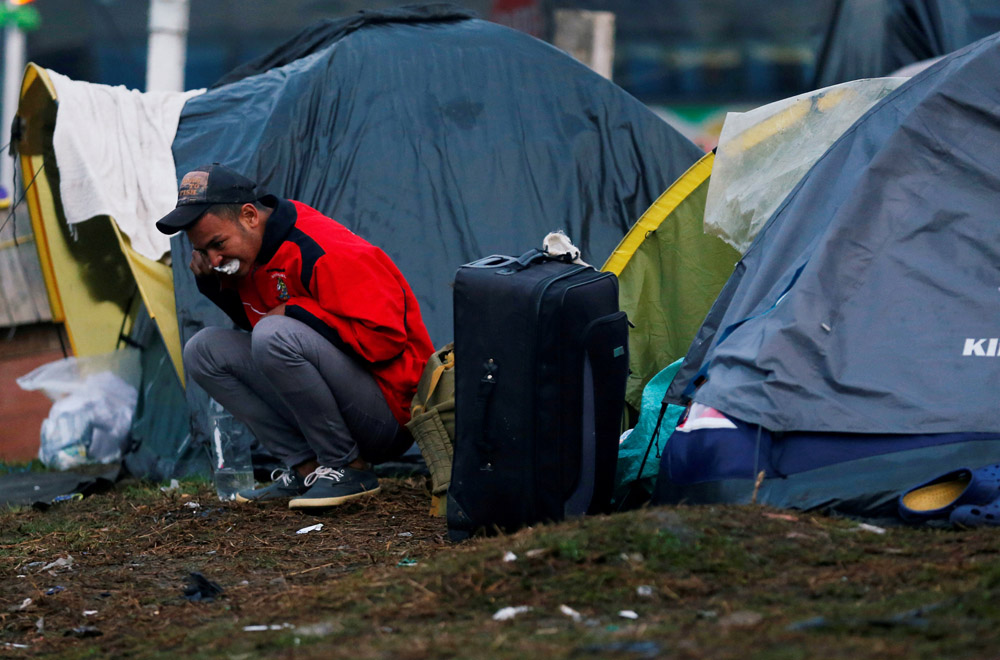 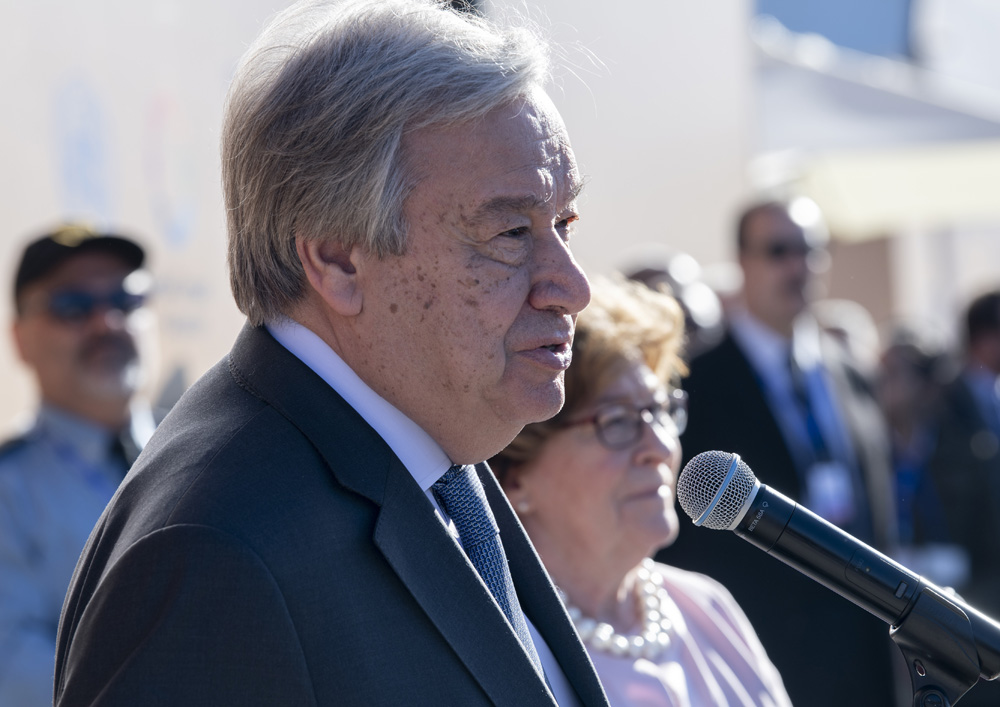 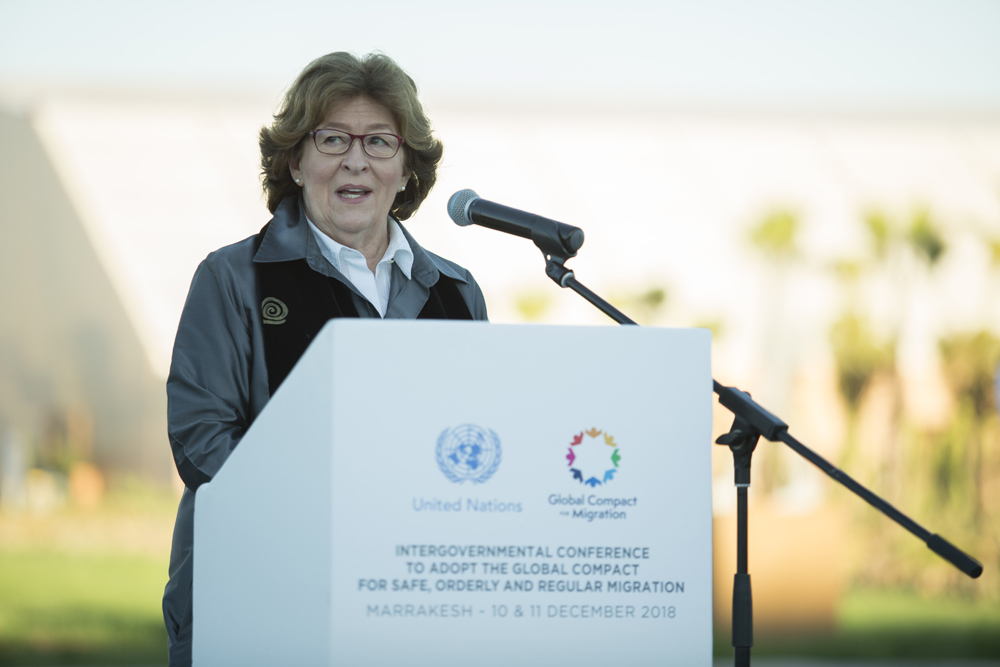 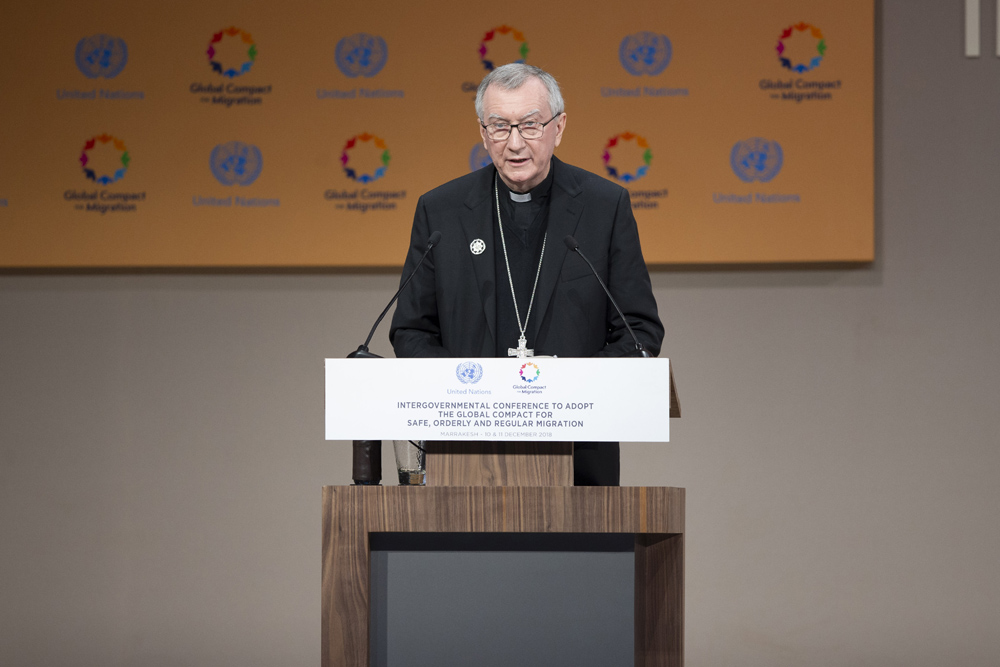