Nguyen Thi Rot, a 16-year-old woman paralyzed from birth, tries to smile sweetly at those who stop by her wheelchair on a Hue City sidewalk to buy lottery tickets.

Until four months ago, she was confined to her bed, unable to move or get outside without assistance. Now she helps support herself and her mother.

"I am very happy to travel with my mother to make a living around the city," Rot says in a weak, slurred speech. She sells her tickets from a wheelchair her mother pushed to the edge of a street in Hue City, the capital of Thua Thien-Hue province in central Vietnam. "I feel healthy and sanguine about life thanks to meeting many kinds of people and enjoying fine views that I never had before."

She says she can make ends meet if she can sell 70 lottery tickets per day. Some people also sympathize with her and give her gifts.

Her mother, Le Thi Re, 54, says that in the past she spent all her time looking after Rot, who was confined to her bed all day long. Re only rarely could manage to carry her daughter on her back to go outside.

Re says they are grateful to the Catholic nuns who offered her daughter a wheelchair, calling it "a priceless gift which helps change her life."

Re says the wheelchair cost 10 million dong ($430), which she could not afford to buy for her only child.

Rot was one of 30 people without use of their limbs who were given wheelchairs last June. The chairs were presented to them at Kim Long Charity Clinic run by the Daughters of Mary Immaculate sisters since 1992.

Local Redemptorist priests and the nuns obtained the donations from the Free Wheelchair Mission based in the U.S.

Sr. Mary Vu Thi Ngoc, who has offered Rot basic supplies since 2016, says disabled people like Rot are utterly bereft and find it hard to integrate themselves into communities because they cannot go out to communicate their ideas and feelings to other people. Most of them live on their relatives' support.

Ngoc, head of the congregation's Charity Committee, says the nuns try to help them deal with their problems and make a living on their own.

Since 2016, the sisters have asked benefactors abroad to give wheelchairs to 150 disabled people.

Thua Thien-Hue Province, where fierce fighting took place between American troops and communist guerrillas during the Vietnam War, is home to more than 30,000 people with physical disabilities, according to provincial data.

They include those who are maimed by unexploded ordnance left from the war, wounded soldiers, and people who are born with deformities, have been in accidents or suffer from disease.

Nguyen Ket, 71, says he lost his legs in 1985 after hoeing in a field and triggering a landmine covered by soil in A Luoi District. He says he became a burden to his wife and children, who work on a farm to support him.

"I also use the vehicle to attend wedding parties, funerals, public events and visit relatives," he says with a broad smile.

Nguyen Van Vu from Phong Dien District says his left leg was amputated due to diabetes in 2013.

"I was given a wheelchair by the nuns in 2016 and I use it to sell lottery tickets at bus stations and markets for a living," the 57-year-old father of three says.

His family has improved its material life, he says, building a new house and paying off debts with 400 kilograms of rice.

Ngoc says the nuns also provide bicycles to children from impoverished families, some with disabled relatives, in remote areas. The bikes offer the children a way to get to school.

Le Thi Huong, a visually impaired Buddhist, said the nuns offered bicycles to her two children, aged 10 and 13, in April.

"I feel God's love through the nuns' service," says the 45-year-old who was abandoned by her husband after she became blind in 2008.

She says that every month the nuns give her family rice, money, clothes and scholarships. "We also have parties held on Christmas and New Year at the convent," she says.

She says local people live in poverty and could not afford to have their children treated at hospitals.

"Following God means sacrificing ourselves to bring love and happiness to people in need," Dien said. 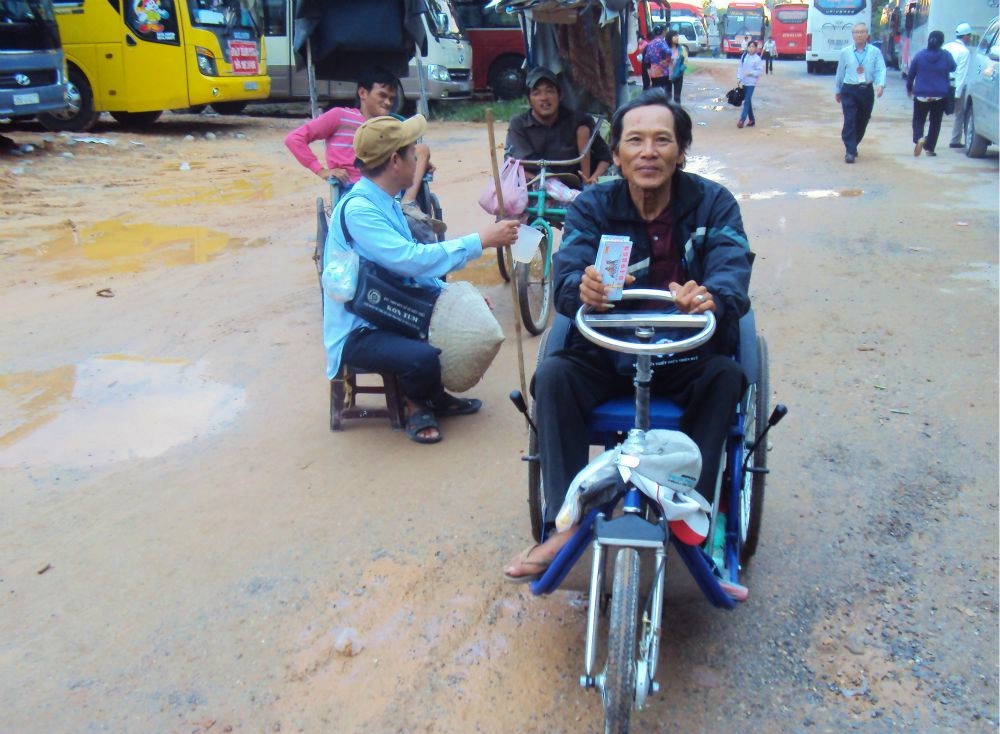 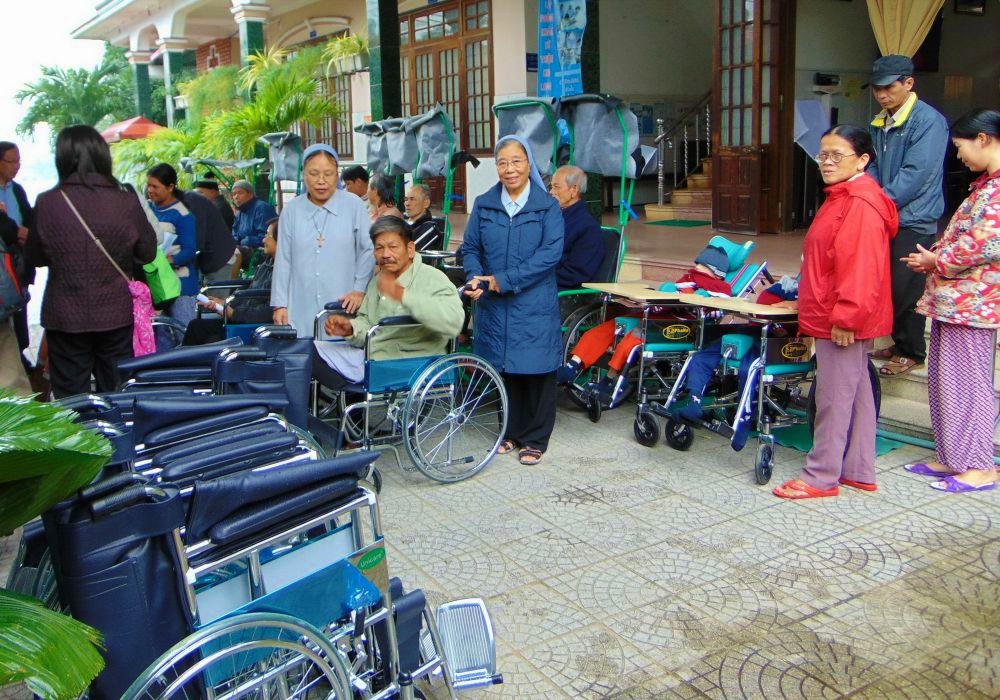 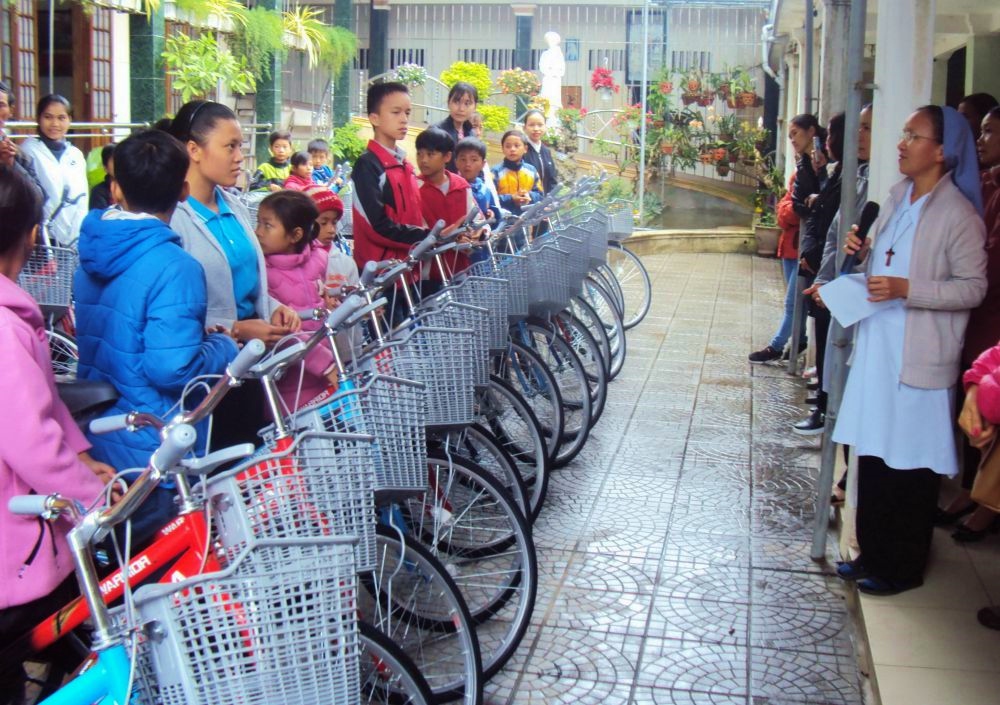