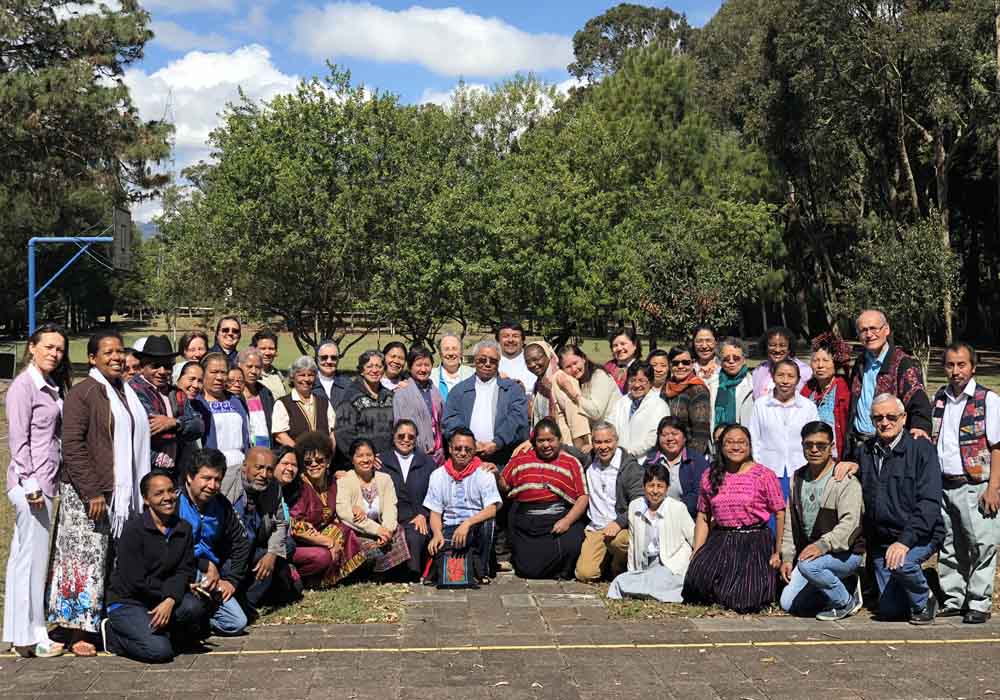 About 50 members of CLAR participated in the interculturality seminar, mostly coming from within Central America. (GSR photo / Soli Salgado)

Guatemala City, Guatemala — dir="ltr">On the floor of the Marists Formation Center in Guatemala City, a Mayan cross made with candles, pinecones and coffee beans lay between the speakers and participants, a constant presence for the indigenous and Afro men and women religious attending this conference on interculturality. How these religious can help blend the best of their native worlds with the Catholic Church as an institution was the topic — and challenge — at hand.

Day one expanded on the theme of interculturality, which Silvia Regina, the first presenter, defined as the "art of relating" across cultures, fusing the best of each. Of the roughly 50 participants, most have ministries in Guatemala, while the rest came from all over Central America, Brazil, Colombia and Peru.

While interculturality has been widely discussed and encouraged in religious life, adopting that practice or attitude can be especially complicated in the Afro and indigenous realms. Hesitation or defensiveness from indigenous and Afro members of religious communities at the conference went beyond expressing a personal preference of how to speak, dress or worship.

"I belong to a church that is asleep to our existence, so it's a little provoking when I'm told to supplement with mainstream culture because my culture is largely invisible to the church already," one indigenous sister commented following Regina's presentation. 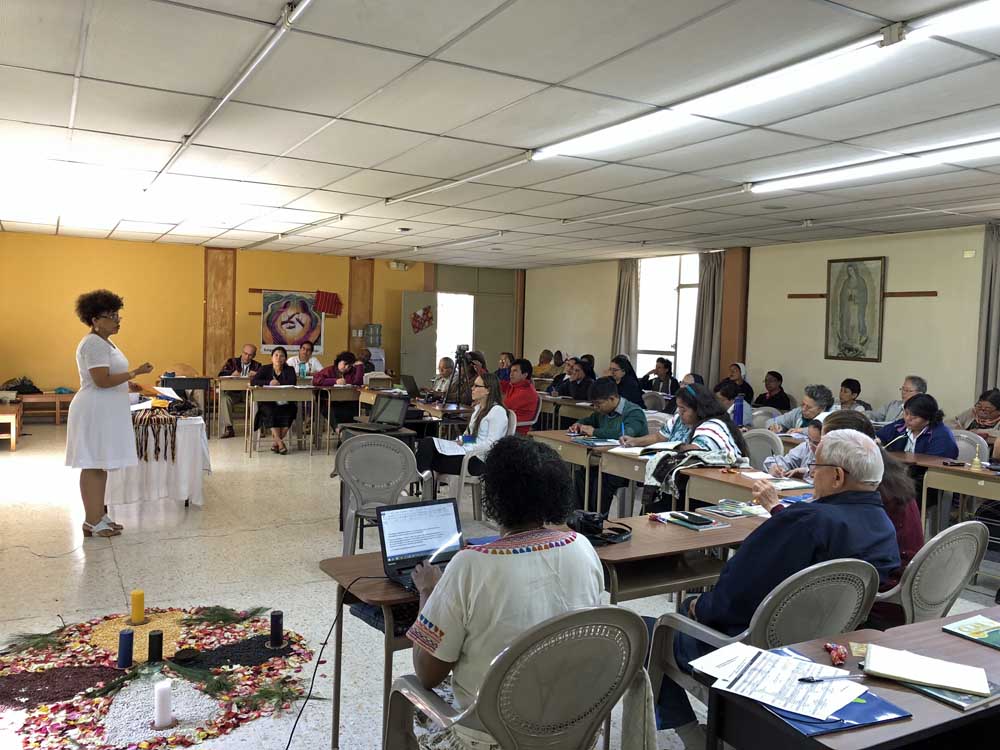 Because some indigenous groups "have been so discriminated, exploited and profoundly humiliated," Regina told GSR, "I see it as normal when people decide to protect themselves and maintain their own, what's proper and specific to them, in the [interculturality] process.

"In that sense, interculturality is in union with 'decolonization,' " the undoing of colonialism, Regina said.

Overcoming a controversial past

Ownership of the church's role in the colonization of Central America is a vital step in this dialogue, Fr. Eleazar Lopez Hernandez said during his presentation.

"It cannot be denied that religious life, like the missionary church, arrived in the same boat as the conquerors and rulers and was used for the implantation and consolidation of the colonial society," he said, though he added that religious life also assumed roles of radical and effective criticism of the system back then.

For a long time, religious life has been identified in Latin America as something forbidden to the common people, he continued, as something proper to the first-world individuals or those close to the ruling classes.

"When vocations coming from [pueblos and rural areas] were admitted to the convents, they were cornered into spaces of second- or third-category. They were the little brothers and little sisters of the congregation who did not study or hold important positions."

As in other poor sectors of the world, among indigenous people, vocations in religious life emerge as a way of escaping misery and as a possibility for social ascent, Hernandez said.

But there are also indigenous people who see religious life as a possibility to channel the oldest cultural and religious aspirations of their peoples, he continued: They seek religious institutes that work among people who live in poverty and that encourage intercultural and interreligious dialogue. Still, congregations often lack adequate plans to train indigenous newcomers, assist them, and accompany them in their processes.

Hernandez reminded participants that in talking about what the church needs to do to reform its attitudes, "we must remember we are the church; it starts with us."

"Is official consecrated life willing to go down from the ship of the conquerors to climb the canoe of the towns and enter fully into the hut of the poor and excluded, with all that this implies?" 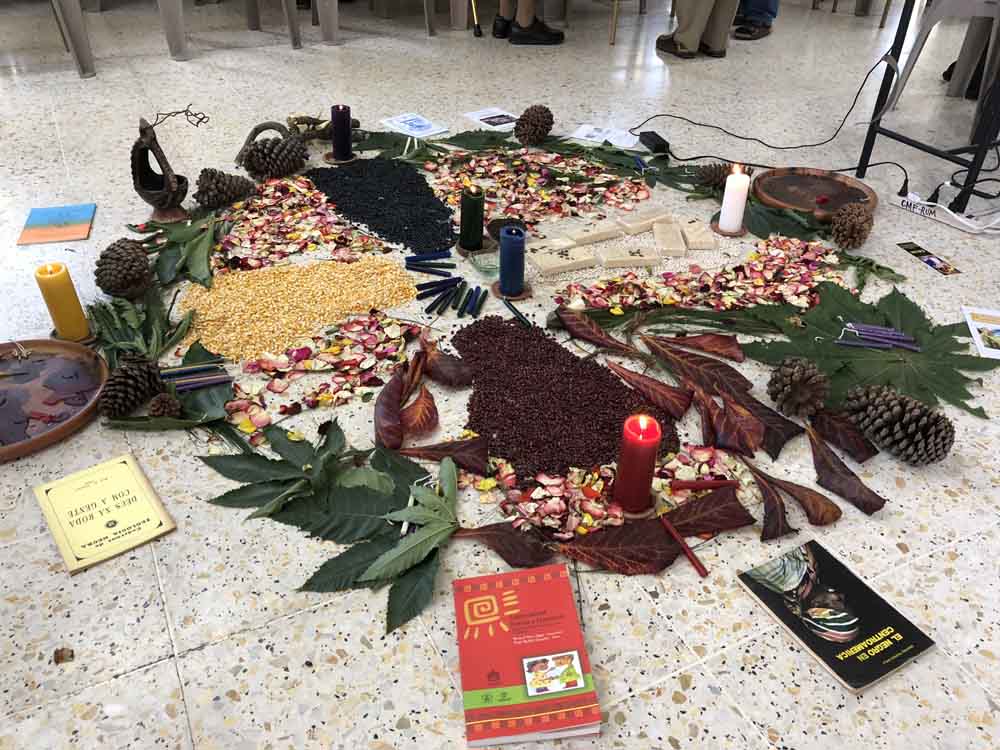 The Mayan cross displayed throughout the conference was a symbol of the tree of life and the interconnectivity of beings and nature. (GSR photo / Soli Salgado)

How to get to interculturality

This process of interculturality — in this case, the dialogue between indigenous people and the Catholic Church — begins by emphasizing the importance of native cultures and affirming identities before the "decolonization process," as Regina calls it.

"Christianity has a strong cultural weight, and that weight can become one's dominant identity," she told GSR. "And it's an identity that's quite white, capitalist, patriarchal. So to that person [in the majority], we're saying it's important to open oneself to the conversation of interculturality so that they can assume and respect the different cultures in that community."

Following one of the presentations, a Nicaraguan sister commented that she was a missionary for more than 40 years in nine countries: "I tried to take Nicaragua with me everywhere, but now I'm no longer just a Nicaraguan. If I were still 100 percent Nicaraguan after all those experiences, it'd be proof that I wasn't transformed for the better."

Sometimes, people think they're "accepting" of indigenous culture just because indigenous religious are allowed to dress how they want in their communities "when there's so much more than that," one attendee said.

For Afro and indigenous communities, others said, prayer is a celebration with music and dance, "so it's important to include that in the church and respect that form of worship."

Some said the place to start is in building up the self-esteem of indigenous communities, jumping into their personal stories to accept and understand where they come from.

"The indigenous women who I work with [in Bárcena, Guatemala] deal with a lot of misogyny"; for example, husbands tell their wives when they're allowed to leave the home, said Sr. Mercedes Aguilar Perez, whose community, the Missionaries of the Sacred Heart of Jesus, works with women to "reclaim their rights."

She said during a group discussion, her group emphasized the need to study indigenous cultures and history, which "can get lost," she said.

"We need to take that to our communities and incorporate it so that it doesn't just stay in its place. We need to put it into practice. We need to create the path for them to walk and then walk it with them. 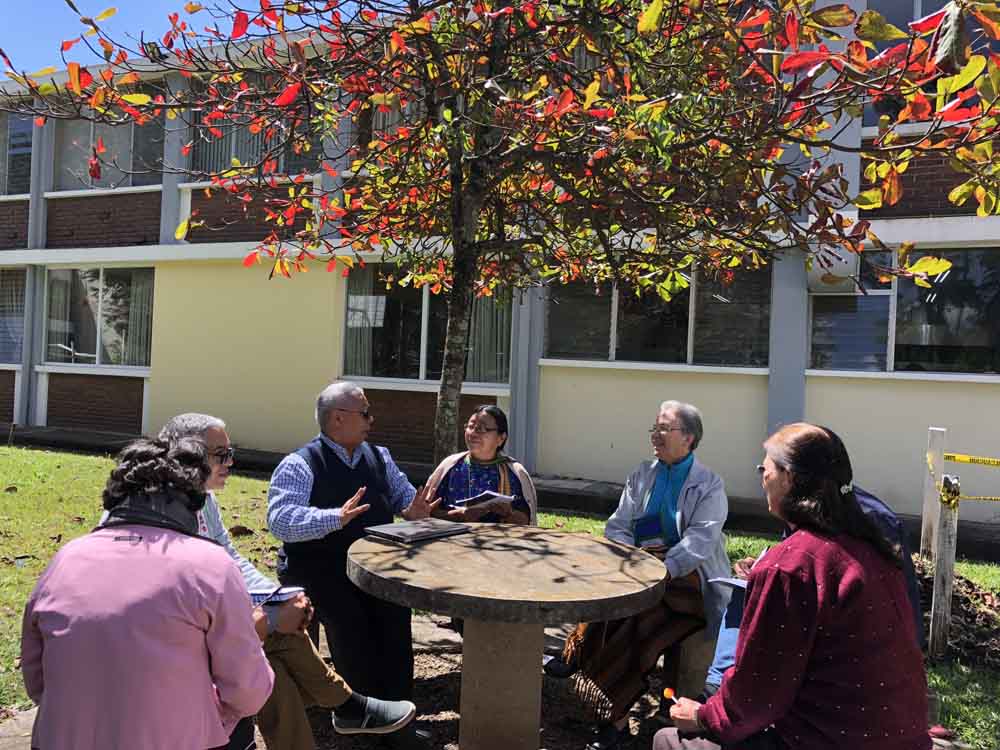 Participants broke out into small group discussions every few hours, later sharing their group's reflections with the rest of the conference. (GSR photo / Soli Salgado)

"And we need to be more welcoming of our Afro brothers and sisters and not exploit them, like we're selling them this product in exchange for their identity," Aguilar Perez said.

Sr. Ruperta Palacios Silva, a Carmelite Missionary of St. Teresa who ministers in Oaxaca, Mexico, said her main focus when working with the indigenous Mixteca community is to "help them feel emancipated."

"We have to empower the vulnerable communities to become the subjects of their stories, political subjects with voice who don't let themselves be manipulated," she told GSR.

Others underscored the importance of formation, which needs to create space for "candidates to deepen and elaborate on where they came from," said Sr. Darmis Consuelo Jimenez, a Missionary of Charity of Mary Immaculate.

"From there, we can live more deeply and fraternally by becoming more inclusive and valuing what one another brings to the table."

Moving into an intercultural future

The many presentations, small-group discussions, and conversations with Mayan panelists culminated in concrete action plans for the religious who attended.

On the last day, attendees divided into two groups: those who work with Afro communities and those who work with indigenous. The former decided to create a commission dedicated to organizing the various Afro groups and streamline their communication with one another. The latter chose to develop a website for online resources to continue the formation process and to link those involved in ministries related to indigenous life. 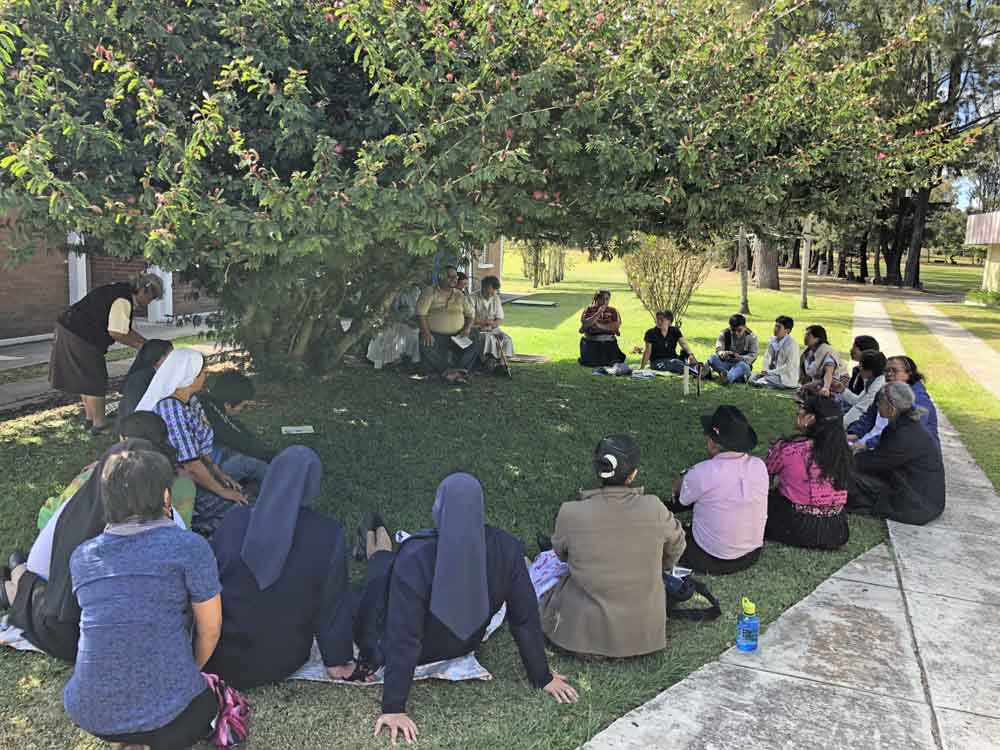 Men and women religious who work with indigenous communities split up at the end of the weekend (with those who minister to Afro communities in another group) to brainstorm action plans. (GSR photo / Soli Salgado)

A final document highlighted reflections from the weekend seminar, including:

Challenges ahead, the document noted, include assuming an interculturality that helps indigenous and Afro peoples to be "subjects of their own liberation, and not victims of the neoliberal system," and that those in charge of ongoing formation draw from these cultures so the process can include their worldviews, too.

The document also calls for consecrated life to "rediscover the value and wisdom of the elderly and the importance of women's leadership to integrate them into society and the church," and for communities to promote intergenerational dialogue.

"Pope Francis allows us to be a bridge between the poor and the tables of universal power," the document concludes. "The commitment to justice, peace and creation is no stranger to any of our charisms. Consecrated life is called to make a pilgrimage to the 'noisy places of history.' "

Ministry | Religious convene over challenge of blending indigenous, Afro cultures with the church

Sisters, charities care for the abandoned children of Guatemala