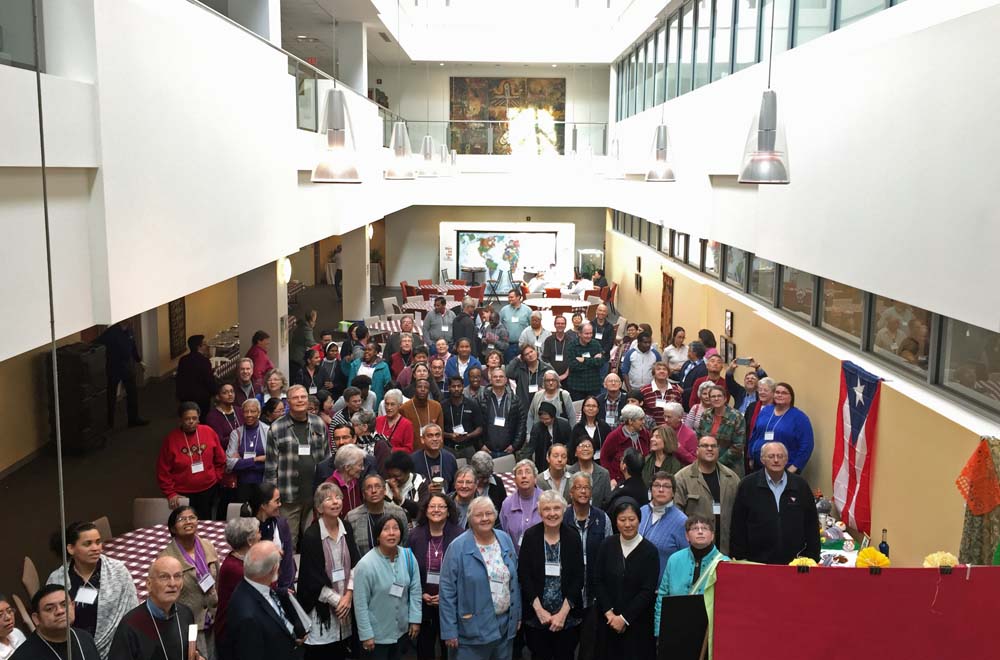 Chicago, Illinois — One of the final speeches grounded the theme of the conference "Engaging Our Diversity: Interculturality and Consecrated Life," hosted by the Center for the Study of Consecrated Life.

Centered on the parable of Jesus with the Canaanite woman, the lecture — by Holy Spirit Missionary Sr. Adriana Milmanda — served as a reminder to the 100-plus men and women religious in the audience Nov. 2-5 at the Catholic Theological Union that even Jesus struggled with ethnocentrism.

When confronted by a woman begging Jesus to free her daughter of demons, Jesus responded with indifference. "I was sent only to the people of Israel," he told the Canaanite woman. "It is not right to take food away from children and feed it to dogs."

"But even dogs get the crumbs that fall from their owner's table," she replied, a response that moved Jesus to heal her daughter. 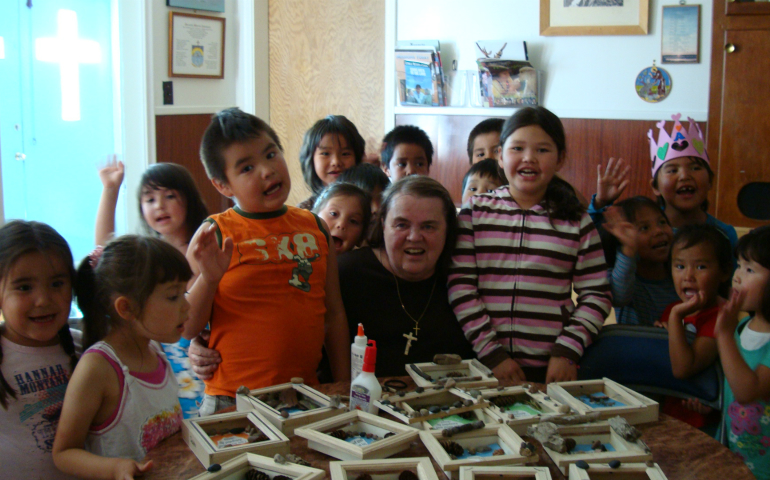 Sisters visit after lunch, which had a different cultural theme every day. (GSR photo / Soli Salgado)

The parable is a testament both to Jesus' humanity and the challenge of navigating cultures: The notion of an insider and an outsider is so embedded in the human experience, Milmanda said, even Jesus was susceptible to this way of thinking — at first.

It's an uncomfortable parable on the surface, but the religious congregations gathered in Chicago had come from all over the world to explore together how they, too, can overcome the unconscious biases permeating their orders. How people from different cultures relate to one another is known as "interculturality."

This, cautioned various speakers at the conference, may be an existential matter for religious life.

Confronting a mix of backgrounds is not a new story for religious life, said Sr. Teresa Maya, a Sister of Charity of the Incarnate Word, in a speech that opened the four-day gathering.

But according to a study led by Notre Dame de Namur Sr. Mary Johnson, Maya said, by 2026, a quarter of sisters in the United States will be foreign-born, up from 8 percent today. And with that slice comes huge implications for formation, ministry and community.

"When we're looking at numbers shifting dramatically, other things are sprouting up," said Sacred Heart Sr. Maria Cimperman, director of the Center for the Study of Consecrated Life.

"So we have to be still enough and observant enough to see those buds. We're not talking about interculturality in the future. This is the present. They're no longer novices. They've come of age and are representing the community. It's here."

Embracing interculturality, she said, has to be ongoing, intentional and communal — qualities manifested in the mechanics and mission of the conference, which Cimperman organized with her team. 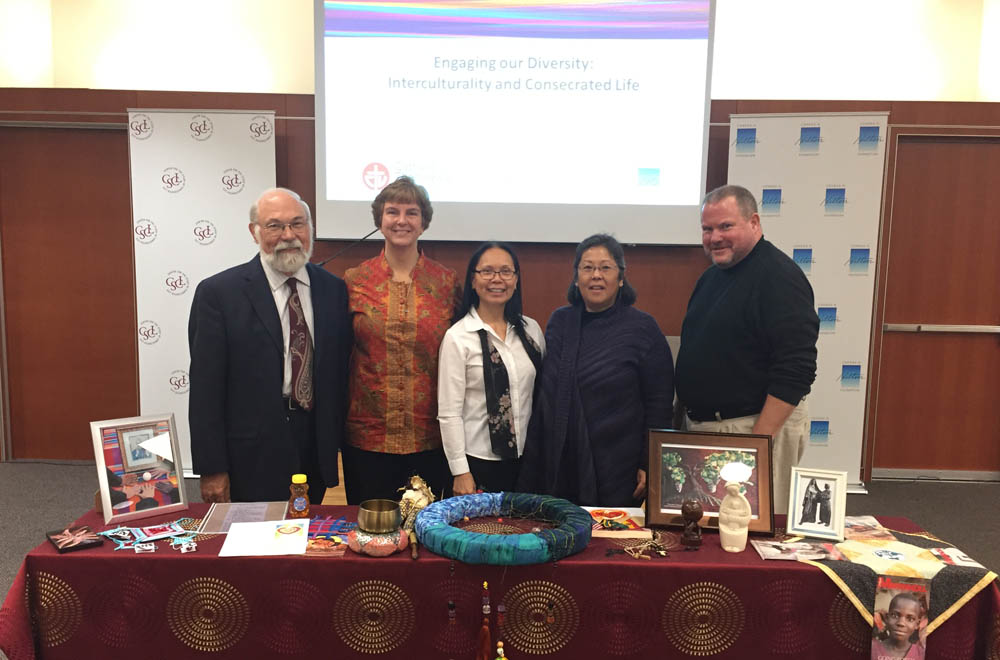 Everything was intentional: Assigned seating ensured each table had at least four countries represented, enriching group discussions with a spectrum of perspectives. Each meal came from a different culture. Lyrics to songs might have four languages woven together, and prayers before meals were mini-international celebrations, such as when an indigenous sister led dancing as prayer.

Each congregation present had signed up for a 30-month process, and they all had to leave the conference with concrete projects for their communities that will embolden their own interculturality.

Before arriving, communities in the U.S. applied by describing their diversity and how they would like to develop it, whether in governance, communications, formation, conflict resolution or other areas. Most in attendance had an international presence.

The 20 congregations accepted into the program (three-fourths of which were women's congregations) in the spring were encouraged to send to this conference someone in leadership, someone in formation, someone from a nondominant culture, someone younger than 55, and one more person if they wanted to, totaling four or five people per congregation. And participants came from all over the map, including China, Colombia and India.

Attendees all took the Intercultural Competency Scale, a tool gauging their order's sensitivity to and experience with interculturality, as well as a survey that the Center for the Study of Consecrated Life had created internally. 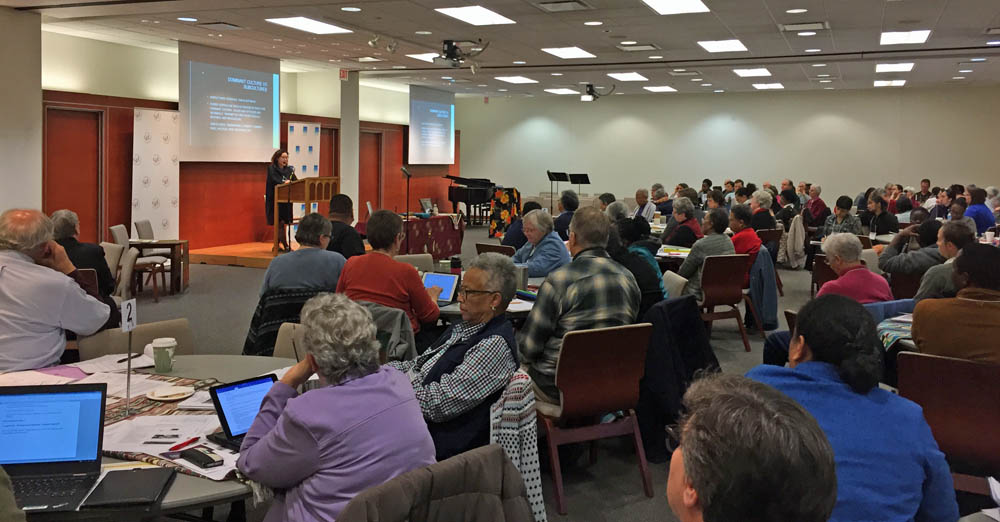 Sophia Park, a sister of the Holy Name of Jesus and Mary, gives a lecture on the spirituality of interculturality and congregational charisms. (GSR photo / Soli Salgado)

After hearing seven speakers (only one of whom was born in the U.S.) at the conference and hours of group discussions, they came up with projects to incorporate into their communities upon their return. For its part, the Center for the Study of Consecrated Life team plans on creating a manual for participants to share with their communities, as well as being a constant resource throughout the process.

They will meet again in the fall of 2018 — the 18-month mark — with each congregation providing quarterly updates on their projects. Though organized dialogue and resources will continue through 2019, when they will convene for a last time, engagement will ideally continue long after the 30-month process officially concludes.

But everything has to be intentional.

More than just a mix of cultures

"We have to ask ourselves why our communities don't mirror the communities we serve," said Maya, a Mexican-American who is also president of the Leadership Conference of Women Religious.

And unless religious communities engage interculturality "meaningfully, honestly, and with all the guilt that we may have, we will not hold a future for our communities," she said, adding that this was not about a "been-there, done-that" workshop, but about a "culture of encounter," to quote Pope Francis.

Theologically speaking, interculturality within religious life goes beyond the mere mix of cultures: It includes a shared charism and commitment to fellowship, motivated by religious conviction and a common mission, said Fr. Anthony Gittins, professor emeritus of theology and culture at Catholic Theological Union and member of the Congregation of the Holy Spirit.

We must truly value difference and rethink the way we think, Gittins said. Otherwise, everyone is simply living together, separately. "It is much more challenging to think and act differently than it is to feel bad and do nothing." 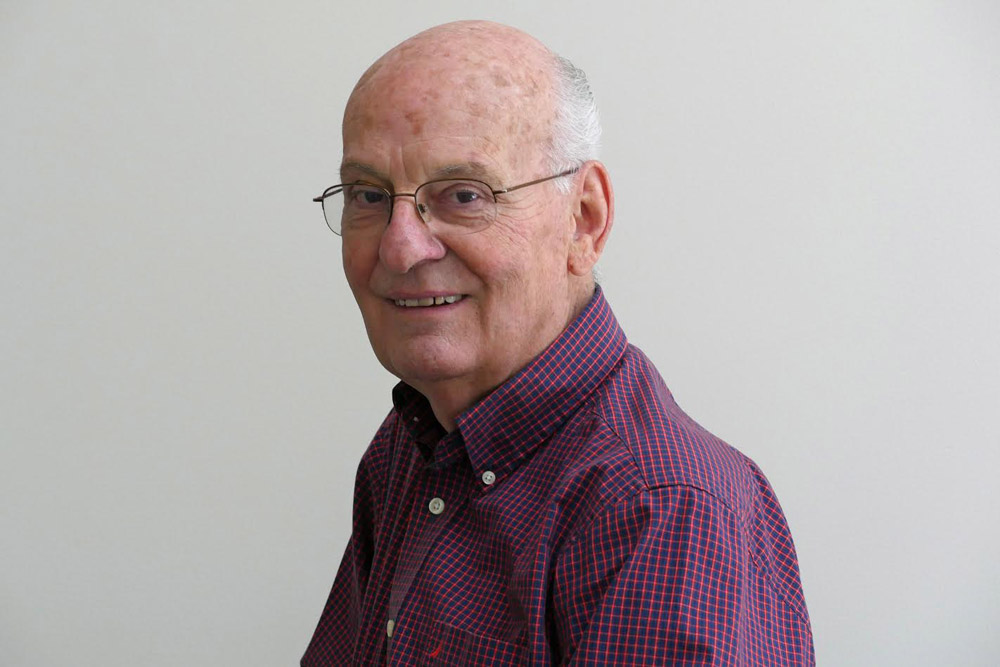 Those differences are not easy to identify, lurking below the surface like an iceberg, several speakers said. Some cultures and their members are more individual-centric, valuing freedom and self-fulfillment, for example, while others are sociocentric and highly regard authority and harmonious relationships. Recognizing such distinctions could be valuable for conflict resolution.

One lecture invoked a quote by sociologist Louis Wirth: "The most important thing that we can know about a man is what he takes for granted, and the most elemental and important facts about a society are those that are seldom debated and generally regarded as settled."

One African-American sister from the audience made a comment that resonated with other participants during a feedback session. We're so enthusiastic talking about encountering cultures from across the sea, she said, but we don't have half that enthusiasm for our diverse neighbors next door.

"We don't need to jump halfway around the world to live what we're seeking," she said. "Anything said about the Latina culture in a Euro-Anglo congregation could have easily applied to me."

For Sister of Providence Tracey Horan, that point was particularly challenging but accurate, she said.

"It's almost more comfortable for us to talk about diversity when it's far away as opposed to the diversity that already exists and the people who are from the same place but with different experiences. ... That was a good reminder to me that a lot of times, we tend to emphasize the obvious because it's further removed than the diversity that's right in front of us, which is harder to address."

In another feedback session, one sister mentioned the challenge of unintentionally forming a new us-them dichotomy between those who embrace interculturality and those who are perceived as "never going to change." How do we prevent them from becoming the new outsider?

One brother stood up and joined this sister in her concerns. "Some people, their hope for the future is very dark. How do you transmit the joy that is happening here to those who are not hopeful about the future in our communities? How do we invite those people in this newness that is happening, called interculturality?

"Jesus changed after meeting the Canaanite woman, so it can be done. That's the challenge for us now."

'It moves the whole'

Jesus possessed a subversive attraction to society's outcasts but still needed to be challenged to expand his own identity, "and therefore, his vision of God's kingdom," said Milmanda, who is from Argentina, in wrapping up her lecture.

In the Gospel of Luke, a lawyer asked Jesus, "Who is my neighbor?" expecting clear limits and guidelines. But Jesus responded with the parable of the good Samaritan, a man who showed mercy on a victim despite being cultural enemies.

"Instead of reinforcing the religious, cultural and national boundaries by carefully delimiting the category of 'neighbor,' Jesus challenged the lawyer and drew his attention to the victims of the system, the excluded ones," said Milmanda, who is also director of the Center for the Empowerment of Women in Vulnerable Situations in Argentina. 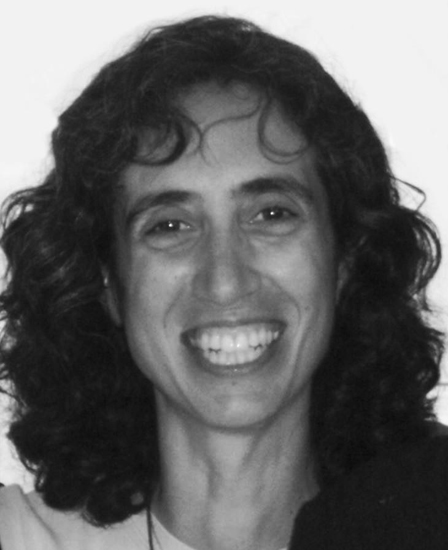 "What is making them invisible to the system? What religious rationalizations prevented a compassionate response from the temple officials [who ignored the victim]?

"These questions refer to issues so ingrained in the cultures that they are very difficult to see by insiders, whether out of plain fear or due to the blind spots that every culture has."

Jesus grew from dismissing the Canaanite woman to choosing a Samaritan as an exemplar neighbor — a demonstration of the human ability to grow beyond one's own boundaries, Milmanda said.

At the end of the conference's four days, a member from each community presented their project ideas for their congregations. Some said they plan to create a video summarizing what they learned at the gathering, distribute it to all their provinces, and use feedback to create an action plan.

Others said they will create an online workshop or a congregationwide conversation café to share articles and discuss what they are learning. Another said they plan to create a retreat for the leadership on these themes. One community plans to develop their own assessment tool reflecting the 12 skill-building categories they learned earlier in the week, with a video of brothers and sisters sharing their personal stories on what it's like to live in a different culture.

In March, the communities will re-examine these goals and how they're coming along, identifying best practices as well as reflecting on what didn't work out and why.

"Everyone does their piece, and it moves the whole," Cimperman said.

Milmanda closed by quoting a passage from one of Gittins' books, Called to Be Sent:

"Either we choose to continue sinning — by exclusion, separation and boundary maintenance — and every day eat and drink judgment to ourselves; or we resolve, today, to embrace God's radical option for humanity, and — with God's help and steadfastness — to change our lives. There is no third way. This is what intercultural discipleship entails."

"Both the future of humanity, of our congregations, and the church may depend on it," Milmanda said. "It is only when we dare move downward to the margins and outward toward the stranger, that we will truly discover who we are and what we are called to be as disciples of Jesus in mission."

In the upper room

Our sisters from Vietnam