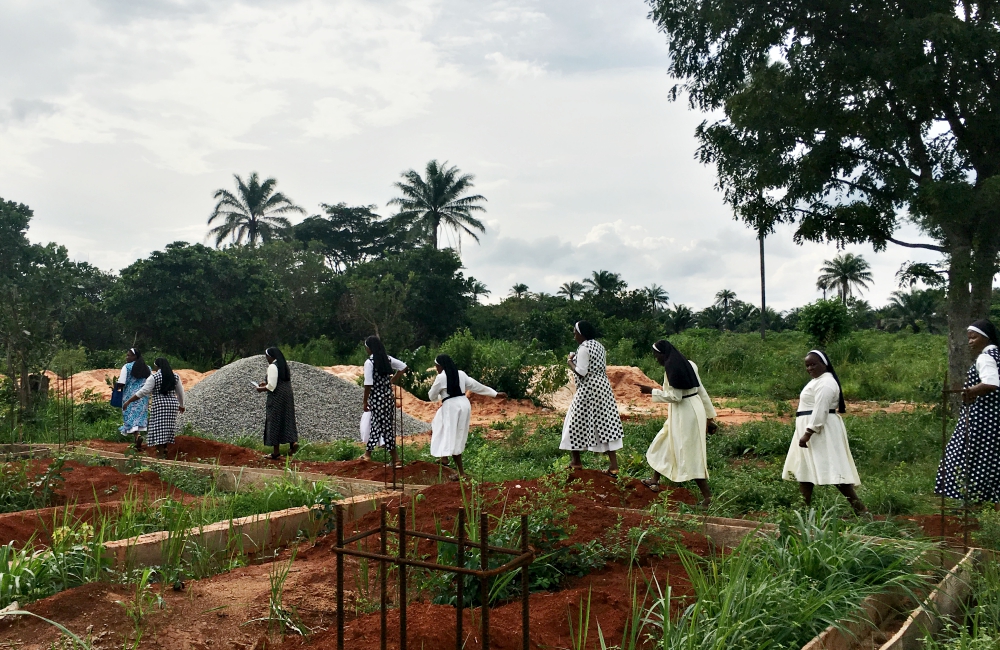 Augustinian Sisters of the Mercy of Jesus visit the future site of their new convent and chapel in Nigeria's Idah Diocese. (Festus Iyorah)

Kogi, Nigeria — Feb. 26*, 2014, is a date Sr. Christiana Akpah, prioress of the Augustinian Sisters of the Mercy of Jesus congregation, does not like to remember. Overnight, one of her congregation's central projects, a 3-decade-old hospital in Shuwa, was attacked in a night of violence, forcing 21* sisters to become homeless.

The day was meant to be a celebration. Most of the sisters in her congregation were in Jalingo, a city six* hours south, about to celebrate the final profession of five sisters. Originally, the profession had been scheduled to take place in Shuwa, where the sisters run a medical facility* in northeastern Nigeria.

The invitations were already printed for Shuwa and the preparations were underway. But at the last minute, Sr. Maria Claude, the Augustinian superior general from France, asked the ceremony to be moved from Shuwa as she was worried about the security situation. Just four* sisters were left behind in the congregation's convent in Shuwa to oversee administrative duties and attend to patients.

At 8 p.m. on Feb. 26*, Boko Haram insurgents burst into the Shuwa hospital and convent with grenades, machetes and AK-47 rifles. Fortunately, there were no patients staying overnight. A hospital staff person on duty escaped over a wall. The terrorists killed two security guards who had been stationed at the gate, and set the maternity and labor ward* ablaze. Trying to force the sisters to come out, the terrorists strafed the convent with bullets and threw grenades into the compound, in what was likely an attempt to kidnap the sisters. 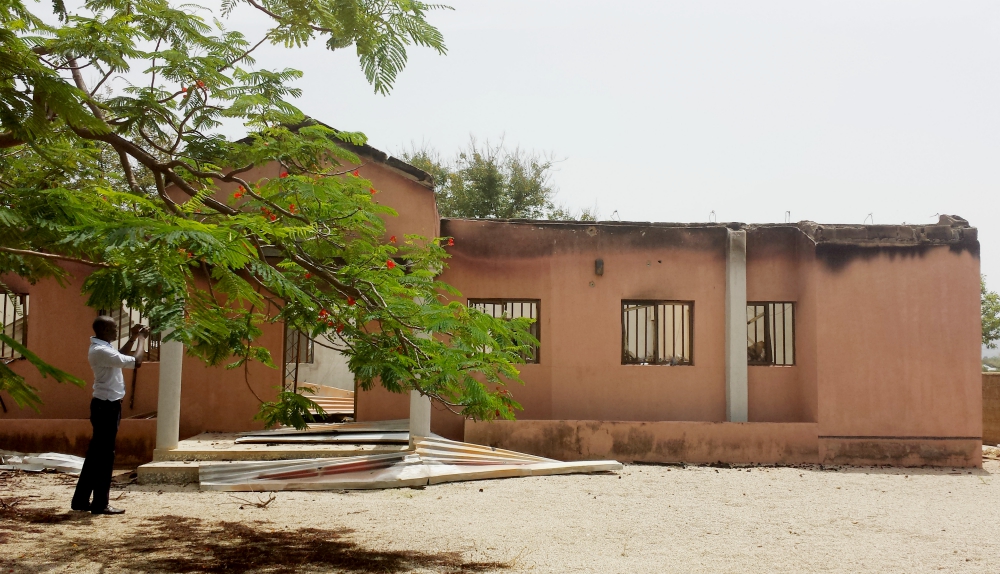 A section of the hospital in Shuwa, Nigeria, destroyed by Boko Haram insurgents (Festus Iyorah)

Two of them, Monica Yedzumi and Augustina Emmanuel, spoke in an interview* about how they sweltered in their pajamas, armed with rosaries clutched in their fidgety hands. They were gripped by fear, praying continuously as the chaos unfolded around them, Emmanuel recalled.

"The whole thing played out like one of those American war movies," Emmanuel said.

Arms slung around each other's shoulders, Emmanuel and Yedzumi inched along the floor to a safe place in the convent, dodging the bullets and grenades. "We surrendered ourselves to God that we are going to die by fire, because we thought there was no way to escape," Emmanuel recalled of that terrible night. "But we found a place indoors; we laid there and kept praying until midnight, when the insurgents left."

The next morning, the four nuns* left Shuwa for Jalingo to reunite with their sisters.

Overnight, the 21* sisters who had spent three decades serving the sick and poor of Shuwa found themselves homeless. The sisters lived in seven rooms in Jalingo, where they had hoped to hold the celebrations for the final professions. On March 6*, Bishop Anthony Adaji offered the sisters a new home in Idah, a town in Kogi state in central Nigeria.

While grateful for the bishop's generous offer, the sisters hoped the situation in Idah was temporary, and they would soon be able to return to their hospital in Shuwa.

But in 2015, the insurgents paid a second visit to the dilapidated convent and hospital there. They torched the few remaining buildings that survived the last attack, perhaps to check if the sisters had returned to rebuild the convent and hospital, Akpah said.

Northeastern Nigeria suffers from a lack of health care institutions, due in large part to the violent insurgency, as well as to decades of governmental neglect. Corruption is a major issue, with politicians siphoning funds meant for building health facilities. At the end of 2016, the World Health Organization announced that two out of three hospitals in Borno state in northeastern Nigeria were destroyed or ceased to function as a result of the insurgency.

Since 2009, Boko Haram, a group of extremist Muslims whose name means "Western education is forbidden," has terrorized northeast Nigeria. The group murdered Christians and burned churches, hoping to clear the area of Christian influences and create an Islamic caliphate to rule under Sharia law. 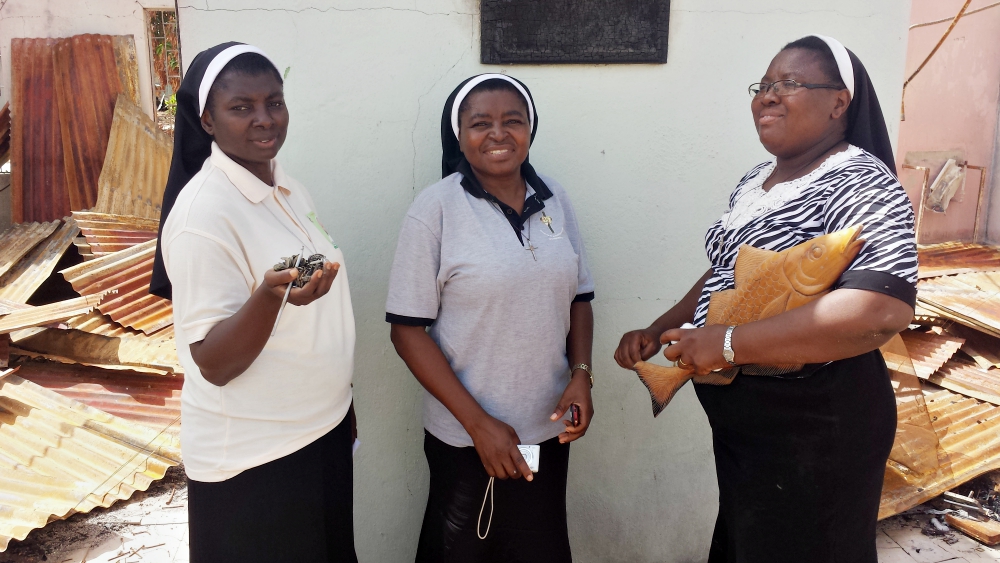 Sr. Christiana Akpah, center, alongside other two other Augustinian nuns, pays a visit to the ruined convent and hospital in Shuwa, Nigeria, on March 17, 2014*. (Festus Iyorah)

The Augustinian sisters faced a wrenching decision: leave behind a population desperately in need of their services, or ensure the safety and security of their sisters?

For Akpah, the insurgents' second visit to Shuwa was the last straw. She organized a meeting with the other Augustinian sisters to decide: Should they keep waiting and hoping to go back to Shuwa, or should they officially move the heart of the congregation to Idah?

"The decision was made through voting," said Akpah. Everyone voted to move to Idah, except for two sisters who wanted to stay in Jalingo, which would offer easier travel to Shuwa.* "The two nuns who voted against moving the novitiate to Idah said we should stay and help the community despite the challenges, but others declined," Akpah said. "We decided we couldn't take the risk."

Many congregations have faced the same question. In Yemen, terrorists killed 16 people, including four Missionary of Charity sisters, at a home for elderly people, in March 2016. Sister Reginette, a Rwandan sister serving in Yemen, had written to her family that she was scared and not able to go outside while wearing her habit because of the situation.

"She said they knew they might die anytime, but they had to obey and continue serving," Fr. Festus Nzeyimana, Sister Reginette's parish priest, recalled of a phone conversation they had in 2015. After the attack, many wondered whether the sisters should have left when the area got too dangerous.

In Zanzibar, Evangelizing Sisters of Mary decided to stay on the majority-Muslim island of Tanzania even after a priest was shot and killed while saying Mass.

Many sisters choose to serve in areas prone to conflict, wars and strife, because their charism dictates they must serve the neediest populations. But each congregation must also decide for themselves when the danger becomes too great. 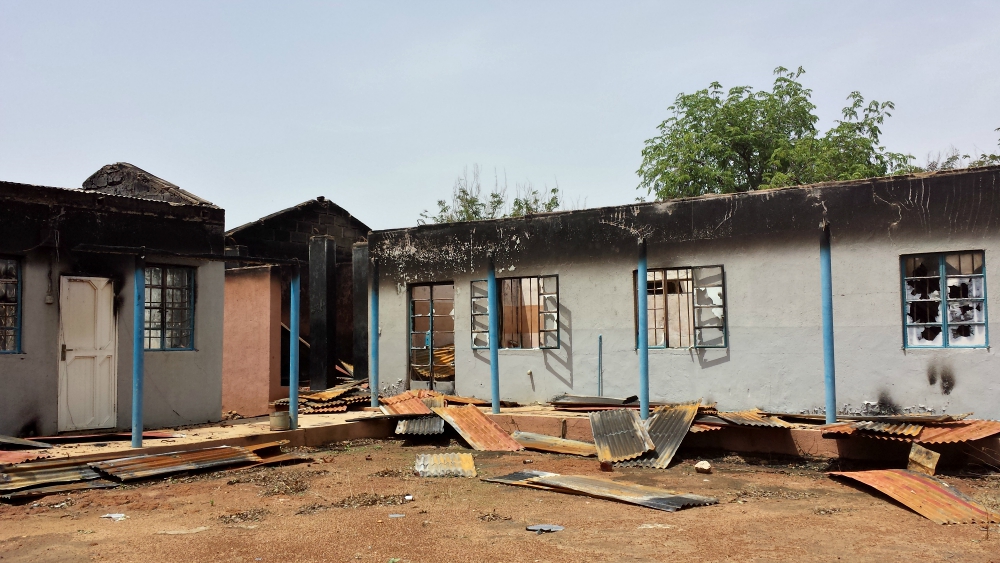 Boko Haram insurgents destroyed this part of this maternity ward in Shuwa, Nigeria, during their first attack. (Festus Iyorah)

In Shuwa, the Augustinian sisters left behind a population desperately in need of their services.

"Since the hospital was destroyed, it is affecting everybody in Shuwa," Ladi Saidu, 46, a resident of Shuwa, told GSR over the phone. "When the hospital was there it was helping all of us, both Christians and Muslims. People even came from neighboring areas like Madagali and Michika." Saidu herself had used the hospital's services half a dozen times over the years.

"The hospital was an important part of the community because even when people did not have money to pay they still got free treatment. The sisters had pity and loved us," she said.

"Now, when we are sick, there is no hospital close to us," Saidu continued. "Once you are ill, your family will need to find a car or motorcycle to take you to a government hospital, which is about four hours away. Pregnant women suffer a lot. Before, when the hospital was here, if a pregnant woman started crying in the middle of the night, the sisters in the clinic would be there."

Despite the pleas of Shuwa residents to return and rebuild the hospital, Akpah has said that is not possible — though they are helping restore medical services there.

"The choice whether to stay or to leave Shuwa was a difficult one to make, because we feel a sense of responsibility to our neighbors, who rely on us for medical services," said Akpah. "However, we did not become nuns to die, hence the decision to move our sisters and the novitiate out of danger."

Despite being violently forced from their homes, the sisters were soon at work laying the groundwork for a new hospital.

"It was God's answer to our prayers as the bishop gave us a spacious and newly painted house which was formerly the bishop's secretariat," Akpah said of the congregation's temporary home in Idah. "It smelled of fresh paint when we arrived here." 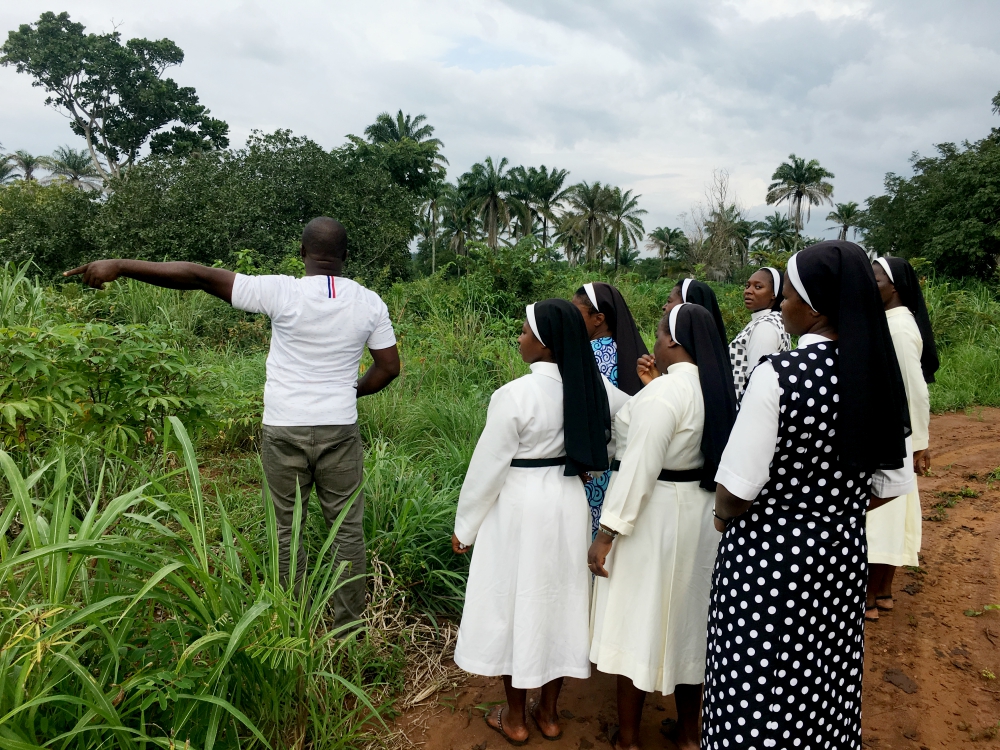 In 2016, with the financial support of Adaji, the sisters laid the foundation of a new hospital in Ejule, about 700 kilometers, or a 12-hour drive, from Shuwa. The hospital was completed in October 2018 and plans to start operations in 2019.

Their new neighbors are farmers and traders whom Akpah described as "peaceful, nice and warm people."

"We intend to do exactly what we did in Shuwa," said Akpah, walking around the grounds of their new home, a spacious compound adorned with flowers, green grass, and a Grotto of Our Lady Of Perpetual Help*.

"In the near future, we also plan to run a retreat center where people can come and have some quiet time with the Lord."

However, Akpah said the Augustinian sisters have not left Shuwa entirely, and are helping to rebuild medical services. A politician who was previously saved by snake antivenin at the sister's hospital donated to renovate the burned maternity ward*. In early 2018, North East Regional Initiative, a nongovernmental organization, rebuilt the maternity ward, to help pregnant women in the region. Former staff from the Shuwa hospital who worked with the sisters now run the maternity ward, and an Augustinian sister visits it every week from Mubi, a town 80* kilometers away from Shuwa. Akpah visited the site in early October to see the renovated ward*.

"We can't remove Shuwa from our plans; it is where we started from 30 years ago," Akpah said.

Still, she said, the congregation is looking for ways to continue serving the community in the way they know best: affordable hospitals with an emphasis on maternal care. In Ejule, Akpah is working assiduously to open the new general hospital. 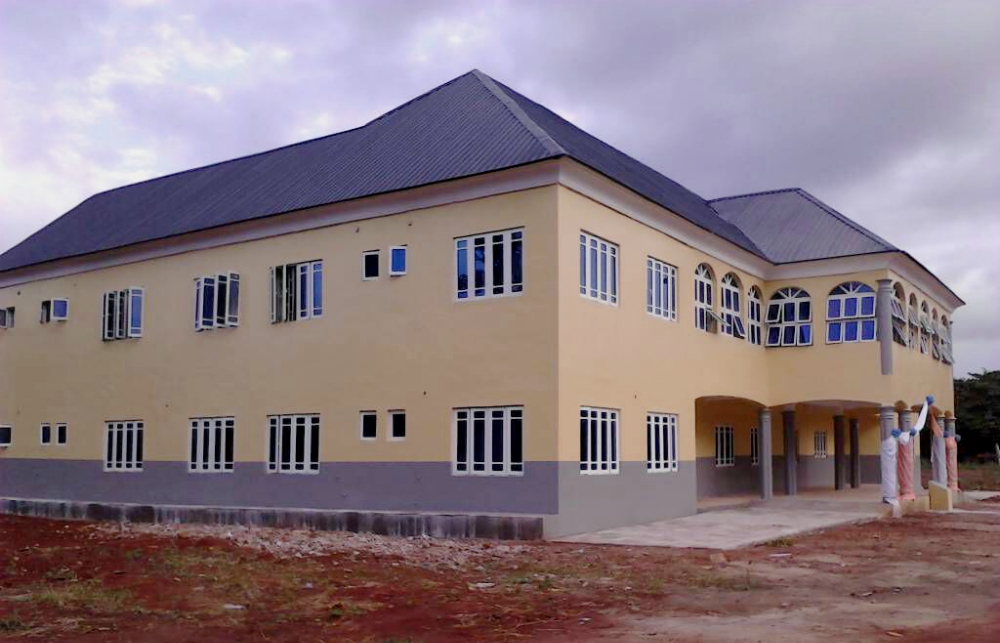 The newly built hospital at Ejule, Nigeria, in the Idah Diocese, where the Augustinian Sisters of the Mercy of Jesus congregation moved to from Shuwa. (Festus Iyorah)

Yedzumi and Emmanuel, the two sisters who survived the first Boko Haram attack, now teach at one of the Idah Diocese's Catholic schools, though they may go back into the medical field after the new hospital opens.

Akpah knows that many other congregations in conflict-prone areas could find themselves facing the same wrenching question, but that each must make their own decision.

"They should keep their ears to the ground to know the latest about the insecurity in the community," said Akpah. "They should listen to their heart and pray for God's guidance if the security gets too bad."

*Since publication, this article has been altered to correct numerous errors.

[Festus Iyorah is a Nigerian freelance journalist and photographer based in Lagos.] 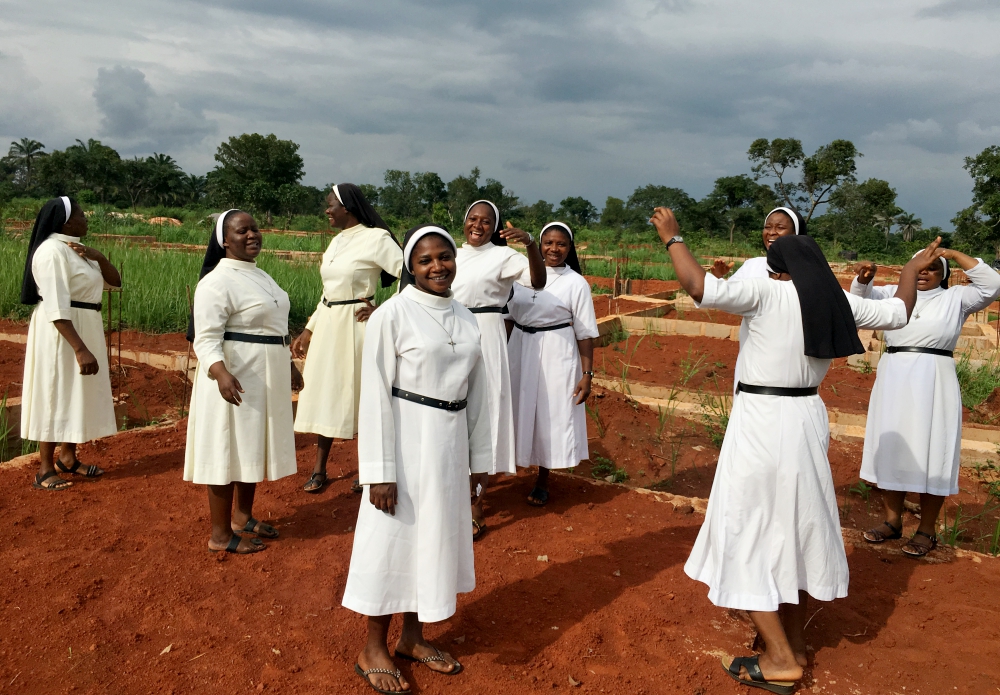 Augustinian Sisters of the Mercy of Jesus visit the future site of their new convent and chapel in Nigeria's Idah Diocese. (Festus Iyorah)
Thanks!
1237

Q & A with Sr. Barb Supanich