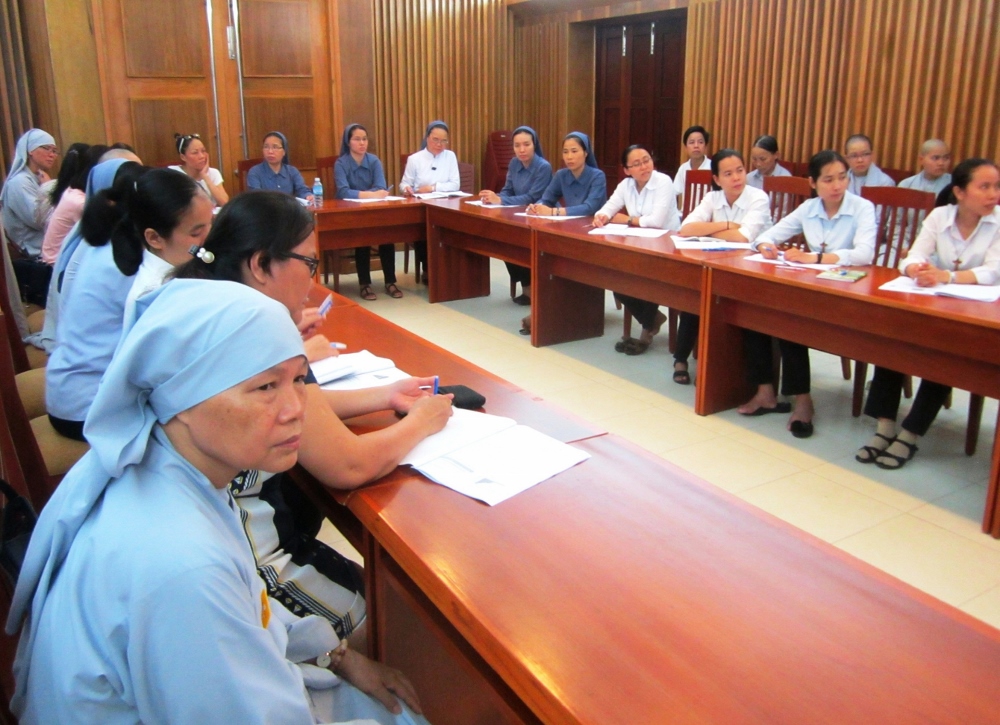 Hue, Vietnam — In the past Sr. Mary Nguyen Thi Van, a breast cancer survivor, found it hard to share her experience of cancer prevention with others since she had no understanding of it.

As a nun, she was reluctant to tell other people that breast cancer is considered a bad omen among women.

However, the Saint Paul de Chartres nun has changed her mind after she attended a recent cancer workshop joined by 40 Catholic sisters, Buddhist nuns and female volunteers.

During the first-ever such workshop held on May 7 in Hue City, Van, who was diagnosed with breast cancer in 2006, told participants, "At first I did not dare to tell other nuns about my disease, although I had a burning pain in my chest and was extremely afraid to get hospital treatment and die of the cancer." After receiving encouragement from her superior, she was diagnosed and her left breast was removed at the hospital, where she spent five months recovering. 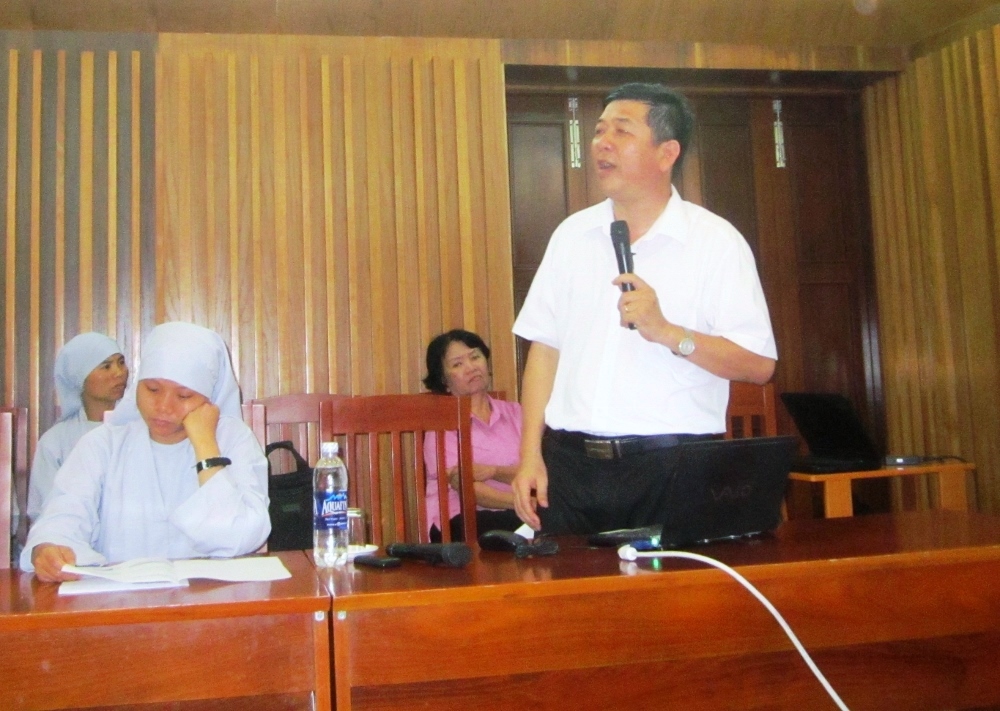 The 47-year-old said doctors cured her of cancer because it was discovered at an early stage.

Van, who is now healthy, urged participants to bravely face the risk of breast cancer and get medical treatment for it immediately rather than hide it.

In recent years, cancer has been growing at an alarming rate in Vietnam, which has one of the highest fatality rates from the disease in the world. This is largely due to the lack of screenings; patients wait for care until their disease is in its late stages, pointing to the need for education. The prevalence of the disease is attributed to heavy pesticide use and contaminated food. 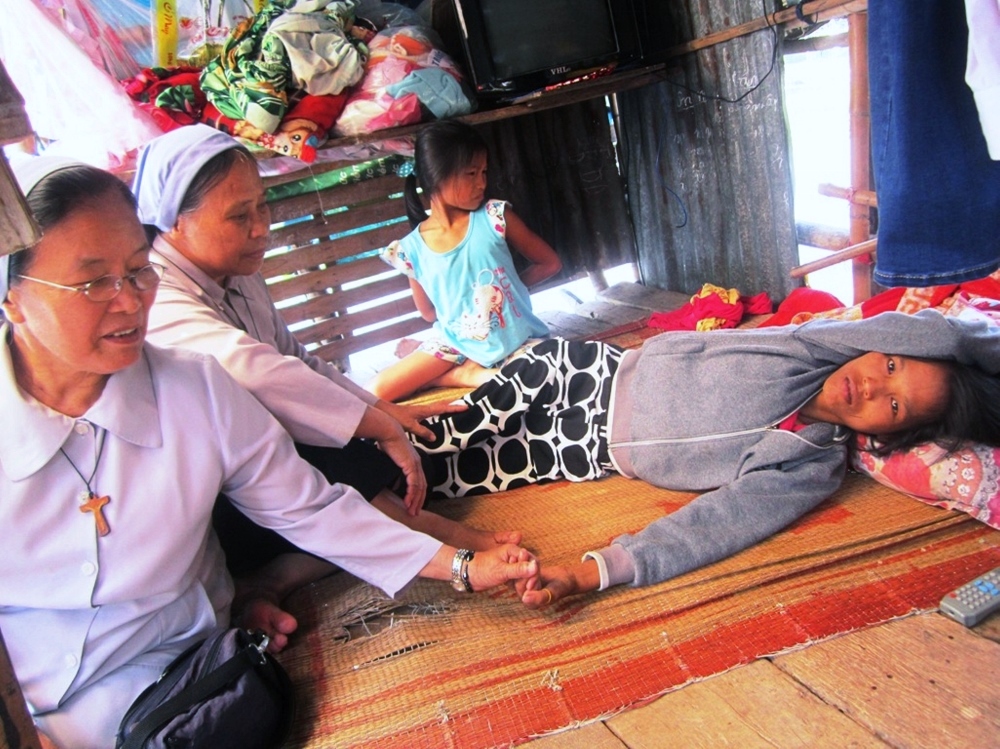 Sr. Mary Nguyen Thi Minh Nguyet, second from left, and another Daughters of Mary Immaculate nun visit a breast cancer patient at her home on May 30. (GSR photo / Peter Nguyen)

The workshop, "Communication of Cancers and Breast Cancer," was run by Community Capacity Development, a local non-governmental organization that works with Catholics and Buddhists to protect community health and to train volunteers and lecturers in climate change.

"The workshop aims to enhance understanding of cancers and especially breast cancer among Catholic and Buddhist nuns and volunteers. Then they will communicate them to other people so as to discover the possibilities of suffering, preventing and treating cancers at early stages," Dr. Pham Thi Kim Ngan, the community group's director and founder, told participants.

During the workshop, Dr. Nguyen Dinh Tung, founder and president of Breast Cancer Society of Hue, talked about risks and prevention of common cancers of the skin, liver, lungs, stomach and ovaries. He also talked about how to detect symptoms of breast cancer.

He said women in their 40s and above and those whose relatives have suffered breast cancers have a high risk of being diagnosed with the disease. In addition, women who have not had a baby are 1.4 times more likely to get breast cancer than other women.

Tung said breast cancer is one of the most common cancers facing women in Vietnam, affecting 12,000 women each year and causing 4,500 fatalities.

The Institute for Studies and Prevention of Cancers based in Hanoi estimates the yearly cost of medical treatment for breast cancer is 9,200 billion dong (about U.S. $413 million). From 50 percent to 87 percent of patients seek treatment when they are in the late stages of cancer, and 22 percent have trouble paying for their hospital treatment in the first year.

Van said she will include cancer prevention education as part of her marriage preparation classes and training sessions on HIV/AIDS for local people.

She will encourage people to avoid drinking, smoking and growing obese, and to engage in regular exercises and breastfeeding as ways to prevent deadly cancers.

After the workshop, two Daughters of Mary Immaculate sisters paid their first visit on May 17 to Nguyen Thi Bong, a bone cancer patient living in a ramshackle house in Hue City. One of them, Sr. Mary Nguyen Thi Minh Nguyet, described the patient as lonely, in pain and lacking material and emotional support from others.

"We should visit, console and help those patients and pray for them to be in peace as part of our ministry," she said. 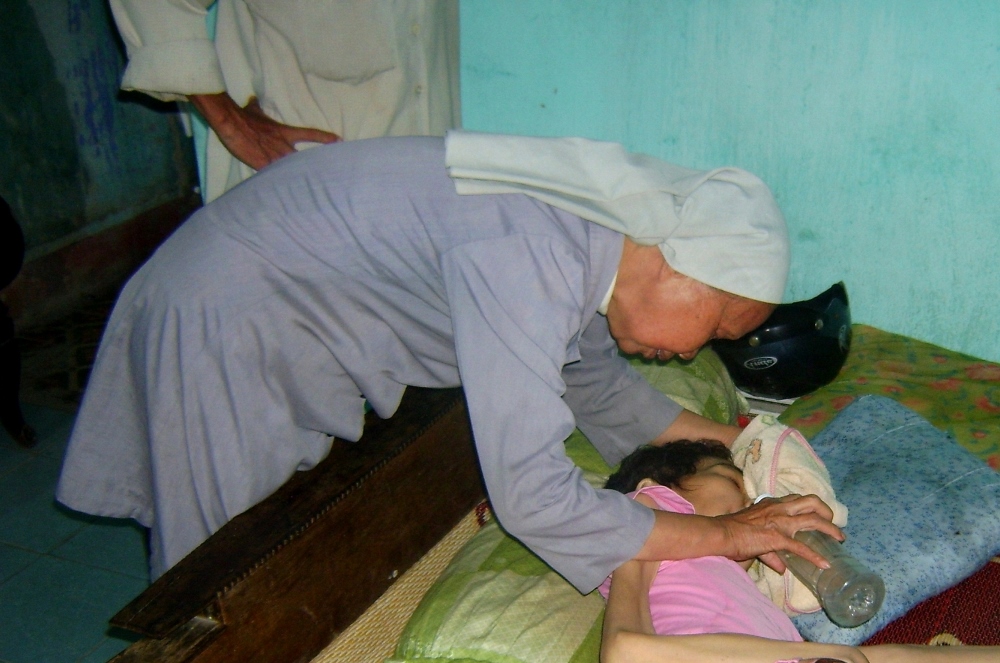 Bong, 53, who is at the final stage of cancer, said doctors have given her only pain relief medicine because her disease is not curable. She had no money to get medical checkups earlier.

"Few people visit me, and my days are numbered," she said in tears.

About 2,000 cancer patients are receiving medical treatments at local hospitals in the area.

Catholic and Buddhist women in Hue have worked together to look after people with HIV/AIDS for years. They hope to have the same partnership for working with cancer patients in the future.