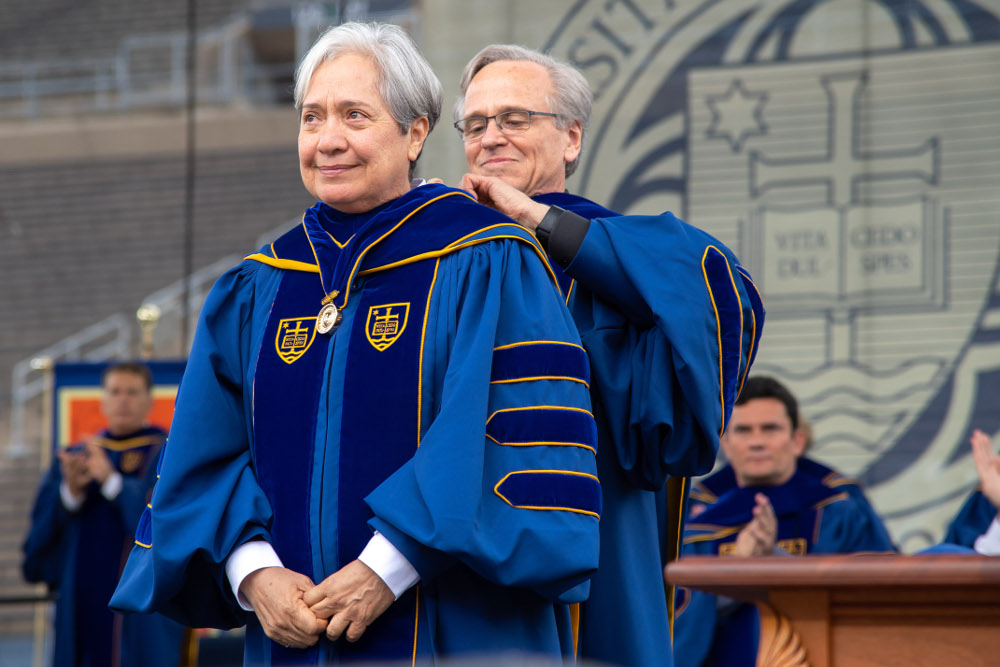 Holy Cross Father John Jenkins, president of the University of Notre Dame in Indiana, places the Laetare Medal on Sr. Norma Pimentel May 20 at the university's 2018 commencement ceremony. Pimentel, a member of the Missionaries of Jesus, is the executive director of Catholic Charities of the Rio Grande Valley in Texas and longtime advocate for immigrants and refugees. (CNS/Matt Cashore, courtesy University of Notre Dame)

University of Notre Dame graduates were asked May 21 to take stock of where they are going and what they will do with their talents.

"Today you have the opportunity to decide what you will be beyond this point. Will you say yes to God's plan in your life?" Sr. Normal Pimentel, recipient of the university's 2018 Laetare Medal, asked the university's graduating seniors.

Pimentel, a member of the Missionaries of Jesus, urged the graduates to think about what their response would be to the world "which needs you to make a difference and speak for the voiceless and help the voiceless have a voice."

The Laetare recipient, who has overseen the charitable arm of the Diocese of Brownsville, Texas, since 2008 — providing those in need in the Rio Grande Valley with emergency food and shelter, housing assistance, clinical counseling and pregnancy care — recounted her own experience as the child of Mexican immigrants and encouraged the graduates to accept God's call to stand in solidarity with those in need.

The Laetare Medal given to Pimentel is part of a long tradition at the university, presented annually since 1883 to honor a Catholic "whose genius has ennobled the arts and sciences, illustrated the ideals of the church and enriched the heritage of humanity."

Notre Dame's graduation ceremony, delayed for an hour because of rain, was attended by approximately 21,000 family members, friends, faculty and graduates. The event's main speaker was Judge Sergio Moro, a Brazilian federal judge who has been a central figure in efforts to confront corruption.

In his address to students and their families, he said he realized how small the world is after asking himself what a judge in a Latin American country has to do with a university in the United States.

"Everything is connected in this small world and you could have a reasonable expectation that what you do here in the United States, or more specifically at the University of Notre Dame, could have a positive impact abroad, all around the globe," Moro said, adding: "This makes your responsibilities even bigger."

He also urged graduates to always fight for the common good.

"Never forget to act with integrity and with virtue in your private and public life. Never stop fighting for these values within your community. Never give up on demanding virtue and integrity from your government," he said.

The ceremony concluded with a prayer by Chicago Cardinal Blase Cupich, who noted that the 2018 commencement fell on Pentecost and prayed for God to inspire the graduates with the Holy Spirit.

"We need this generation, Lord, to be the next greatest generation to uplift those burdened in poverty and oppression, to welcome the stranger and the immigrant, to fight bravely for justice, much like that great generation of their ancestors did in the last century," he said.

Graduation speakers at other Catholic colleges and universities this year included: U.S. Secretary of Education Betsy DeVos at Ave Maria University in Florida; Helen Alvare, professor of law at Antonin Scalia Law School at George Mason University in Virginia, at the University of St. Thomas in Houston; Cardinal Peter Turkson, prefect of the Dicastery for Promoting Integral Human Development, at St. John's University in New York.

Giving voice to those left furthest behind

Q & A with Sr. Mercy Kuriakose on healing the sick with homeopathy