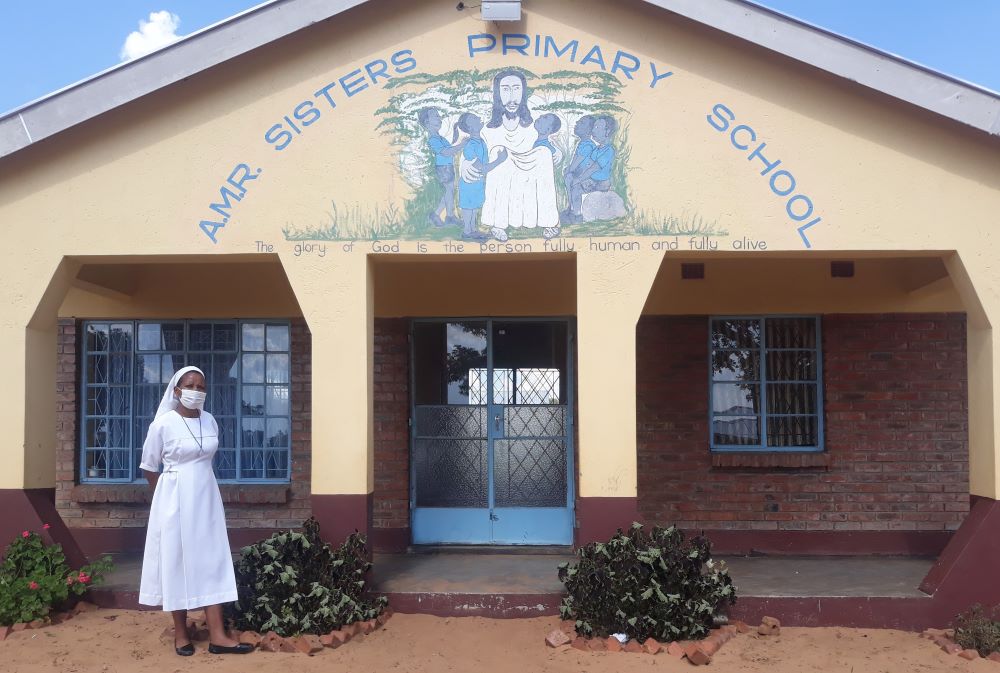 Sr. Praxedis Nyathi enjoys an event at the primary school. Government officials have praised the sisters' ECD program and its state-of-the-art facilities. (Marko Phiri for GSR)

LUPANE, ZIMBABWE — Zimbabwe in recent years has promoted early childhood development, or ECD, making it mandatory for every child to attend such classes before they are accepted into the first grade.

This policy, however, has not been without its challenges, including a shortage of ECD educators and few government-run schools that offer such classes. That has led to a flourishing of fly-by-night unregistered schools offering preschool lessons.

It has been particularly tough in rural areas, long left behind in the country's development agenda where children often fail to go to school because of a lack of education facilities and parents' failure to pay for tuition.

To fill that gap, a diocesan congregation of Catholic sisters has set up two early childhood education schools in Lupane, a poor rural district about 105 miles (170 kilometers) north of Bulawayo, Zimbabwe's second-largest city. 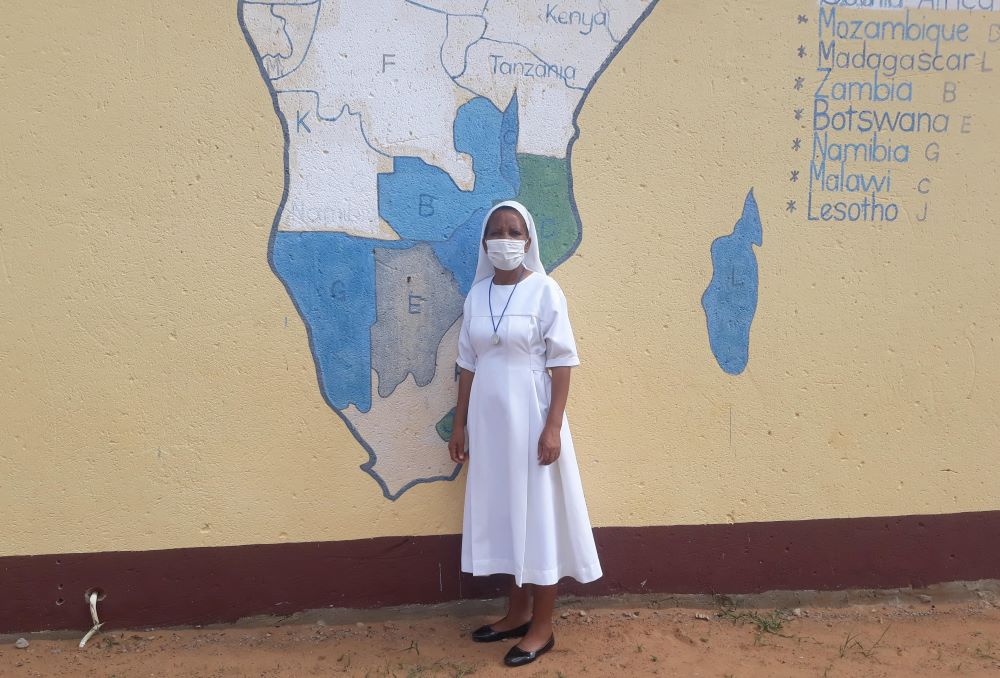 Sr. Praxedis Nyathi stands in front of a map of Africa at the primary school the AMR sisters run in Lupane, Zimbabwe. (Marko Phiri)

Lupane is a small farming and livestock rearing hamlet with a population of about 200,000 people. At its center can be found modern conveniences such as banks, supermarkets, bars, and long-distance buses and truckers going as far as the tourist town Victoria Falls, 139 miles (223 kilometers) west.

Lupane's center is a hive of activity that belies the poor rural incomes found in some villages stretching more than 12 miles (20 kilometers) into the hinterland.

The Servants of Mary the Queen, known by their Latin abbreviation AMR (Ancillae Mariae Reginae) are a congregation of Indigenous nuns formed in 1956 by Mariannhill missionaries in Bulawayo.

The congregation has about 70 sisters whose apostolate straddles teaching, nursing, communication; general pastoral work; and working with the Bulawayo archdiocese and its rural missions spread across the country's southwest.

Local government education officials have hailed the early childhood education development programs run by the sisters as a first in the region with state-of-the-art facilities. There are two early childhood programs, one in the city's center and another at the primary school about 1.2 miles (2 kilometers) in Matshiya village.

According to Nyathi, the school opened in 2018 in Matshiya village with just over 100 children, from early childhood development classes to grade seven. That number has since grown to about 500, highlighting the ever-present need to provide education in the country's rural areas.

At the AMR Primary School, where more classrooms are still under construction, Nyathi says it is challenging to persuade families in rural communities to enroll their children in ECD.

"Some parents try to cut corners and delay enrolling their children and attempt to bring them straight into the first grade. But we have made it clear that we will not accept any child who has not attended ECD classes," Nyathi told GSR.

In Zimbabwe’s rural areas, it is not unusual for parents to choose to send sons to school and keep their daughters at home, believing that the investment in their education will be lost once the girl marries.

Nyathi says the sisters are trying hard to change that attitude.

"We have such cases but ever since we opened the ECD classes, we have been hard at work convincing families to enroll the girl child too. We are making small strides but there is still a lot of work to be done," Nyathi said. 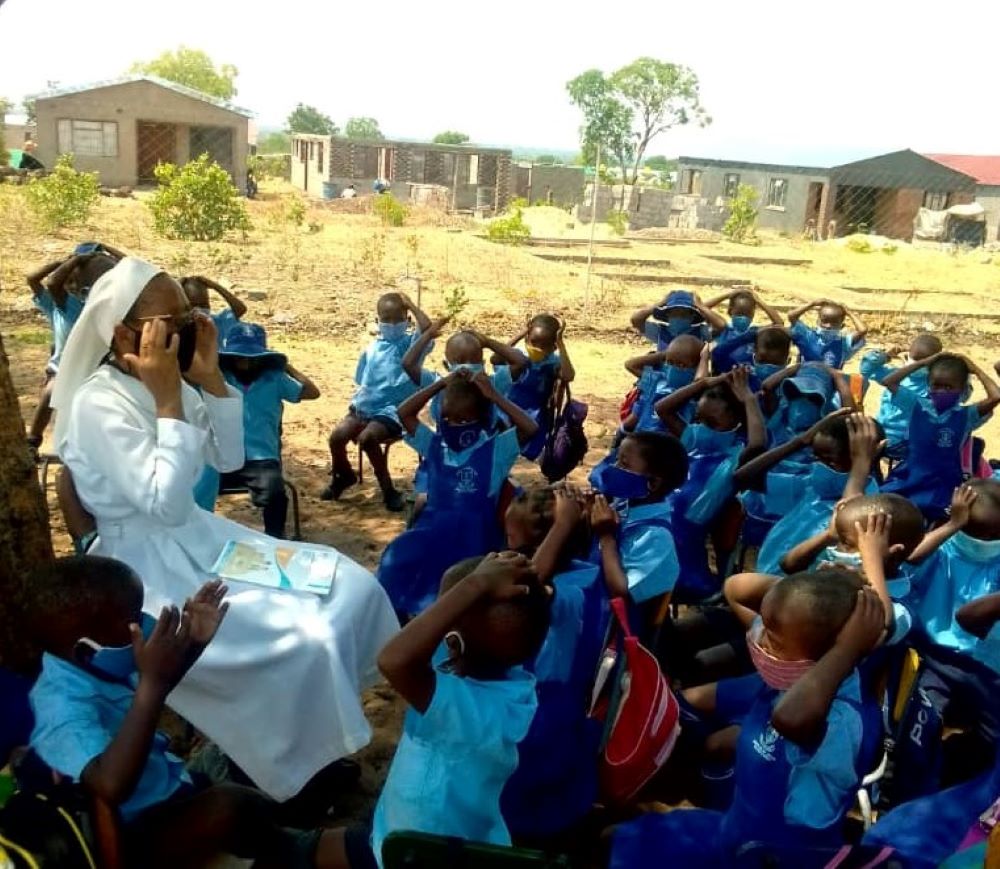 Sr. Praxedis Nyathi talks with students in the early childhood development program her congregation runs. The sisters started the schools in Lupane in response to Zimbabwe's requirement that children be prepared to enter primary school. (Courtesy of Praxedis Nyathi)

That need to enroll more children at ECD is emphasized by Sr. Midlred Chiriseri, an AMR sister who teaches at the nearby AMR Secondary School, which offers what is known as Form 1 through Form 4 classes for students ages 13 to 17. Students from the ECD and primary schools run by the congregation feed into the secondary school.

Actually, there is a need to enroll more children at all school levels, Nyathi said. Parents must be persuaded to bring their children to school, follow up on their schoolwork and be involved in their children's education. “It’s a real challenge here in the rural areas where up to 80% of students are nonreaders, meaning they cannot articulate themselves as other literate learners of their age would. So we have to start them early at ECD to address that," Chiriseri told GSR.

"What we also need are more religious in Catholic schools if we are to fulfill our mission to instill Catholic values in learners," Chiriseri said.

The irony is that while some parents remain reluctant to enroll their children, Nyathi says the existing ECD classes are oversubscribed.

"We have a situation where ideally we should have 20 children in one class, but we in fact have up to 42 children, which is a strain on our teachers," Nyathi said, because the school doesn't have enough teachers.

The country faces a shortage of teachers, including ECD educators. Nyathi said that her congregation and other religious congregations send some sisters for teacher training, but it is still the government that deploys them after they graduate, often sending them to government-run schools. 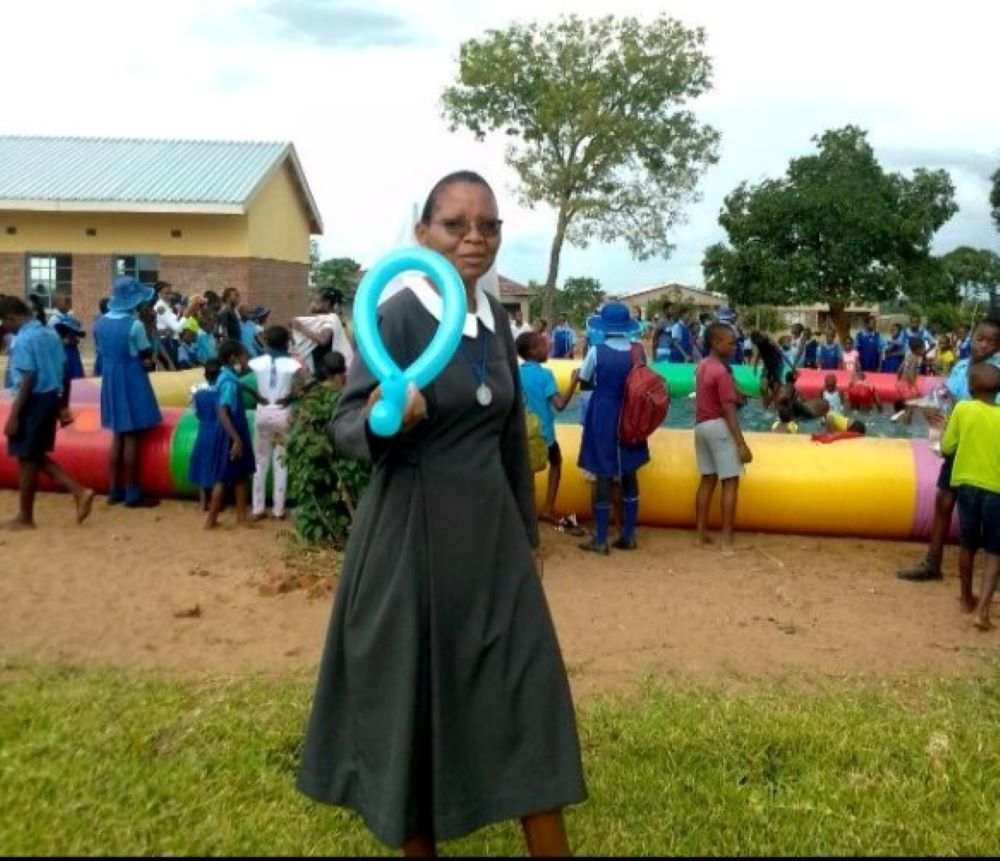 Sr. Praxedis Nyathi enjoys an event at the primary school. Government officials have praised the sisters' ECD program and its state-of-the-art facilities. (Courtesy of Praxedis Nyathi)

Zimbabwe is celebrated as one of Africa's most literate countries, and the education ministry says that such gains since the country's independence in 1980 would not have been possible without the contribution of the Catholic Church.

The country's education officials say more than 3,000 primary and secondary schools are required to meet Zimbabwe's education commitments, with rural areas being particularly in need.

Bulawayo Archbishop Alex Thomas has praised the sisters, calling on them to be "educators of life."

The journey ahead will include ensuring that learners who pass through the AMR schools are well equipped for life as adults, Nyathi said. She would like to see not just academic excellence but also aptitude in practical subjects that ensure self-reliance in a country where there are few formal jobs.

"Catholic schools should be a place where children find Christ, and by starting them early at ECD, we try to produce self-respecting learners who will make meaningful contributions in their respective communities," Nyathi said.