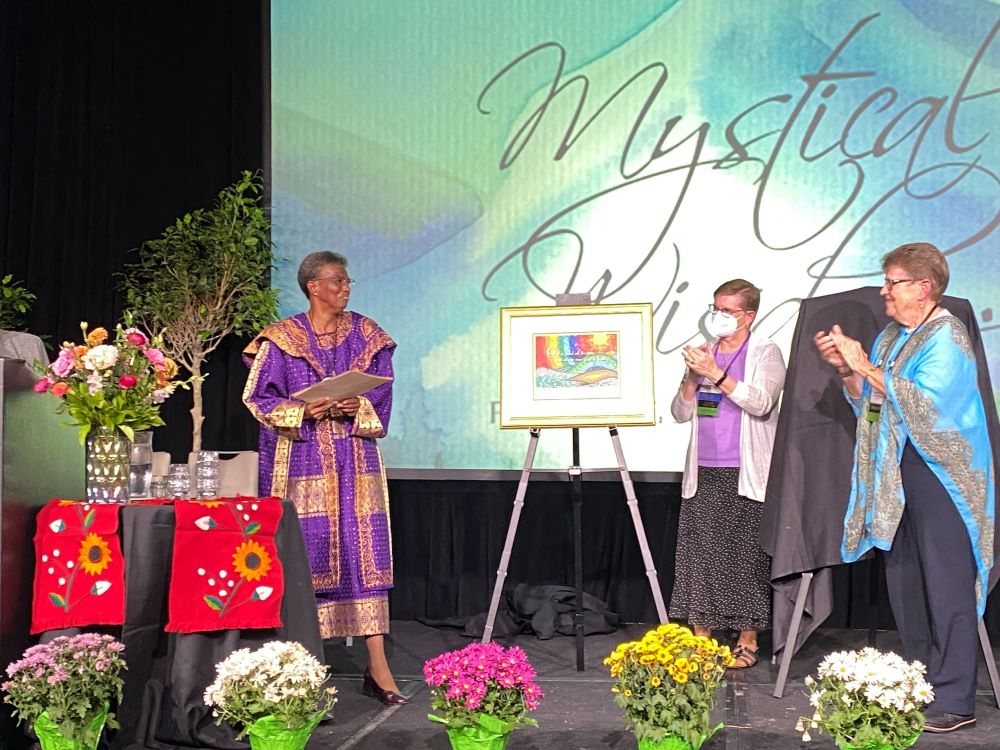 Notre Dame de Namur Sr. Patricia Chappell, the 2020 recipient of the Outstanding Leadership Award, was honored at this year’s assembly. Chappell is former executive director of Pax Christi USA and former president of the National Black Sisters' Conference, and has long been involved in anti-racism work with congregations. (Photo by Helga Leija)

The Leadership Conference of Women Religious closed its Aug. 9-12 general assembly by honoring two women with the Outstanding Leadership Award — one representing Black Catholic sisterhood and justice-minded leadership in the United States, the other, an Irish sister whose global ministries led her to international leadership.

Notre Dame de Namur Sr. Patricia Chappell, the 2020 recipient and former executive director of Pax Christi USA, was unable to be honored in person that year, and was therefore celebrated at this year’s gathering alongside the 2022 recipient, Loreto Sr. Patricia Murray, executive secretary of the International Union of Superiors General.

As Murray noted in her speech, their presence "celebrates the national and international aspects of female religious life today."

The award ceremony began by honoring Chappell, who was the executive director of Pax Christi USA for eight years and president of the National Black Sisters' Conference for five years. Chappell has long been involved in anti-racism work, helping religious communities confront their congregational systemic racism.

Chappell's speech acknowledged the communities that have supported her throughout religious life, and the growing recognition of Black organizations and anti-racism work. Murray spoke of "landscapes" she’s contemplated that can lead women religious "to know who we are to be."

According to her LCWR tribute, Chappell's character, disposition and daring style of leadership can best be compared to her favorite source of adventure: zip lining.

"A zip liner consciously steps out of a place of safety so that she can widen her perspective through an aerial view," her tribute video stated. "She knows that her successful movement forward relies on the tension created in the cable system. And a zip liner needs a streak of daring as she knows the risk, but is willing to launch forward, never content to stay on the safety of sidelines.

"And Patty has never taken the safe and easy path."

First presented with a painting, Chappell took the stage donning a purple and gold African dress, joyously pounding her fist in the air before commencing her speech with the call-and-response style typical of Black preaching.

Related: Sr. Patricia Chappell has long been a leader. Now she's being honored for it

She opened by thanking her 92-year-old mother as well as the communities and organizations that have shaped her religious life.

To the National Black Sisters' Conference, Chappell noted how far they had come since their earliest days. "Those women have been my grandmas, my aunties, my mentors and just plain old 'sista-girlfriends.' And after 50 years, we are finally being recognized," she said. She expressed hope that Franciscan Sister of Perpetual Adoration Thea Bowman's path to sainthood would be realized.

She thanked the conference for helping her "keep my eyes on the prize, my eyes on Jesus, and living the Gospel imperatives of mercy, justice and equity embodied in Blackness.

"May we as NBSC never forget the purpose for which we were founded, to support Black women religious, and to work for the empowerment and liberation of our Black community," she said, adding an acknowledgement of her community's anti-racism team, whose work reflects Catholic social teaching.

"In accepting this award, I invite and challenge all of us as members of LCWR," as well as its affiliated organizations, "to acknowledge and realize that Black and brown and Indigenous bodies, both living and deceased, represent the greatest of all transfigurations, the body and blood of Jesus. May our understanding of this unique gift as Eucharist, be the lifeforce and mission of LCWR in building and sustaining our emergent beloved future," she said. 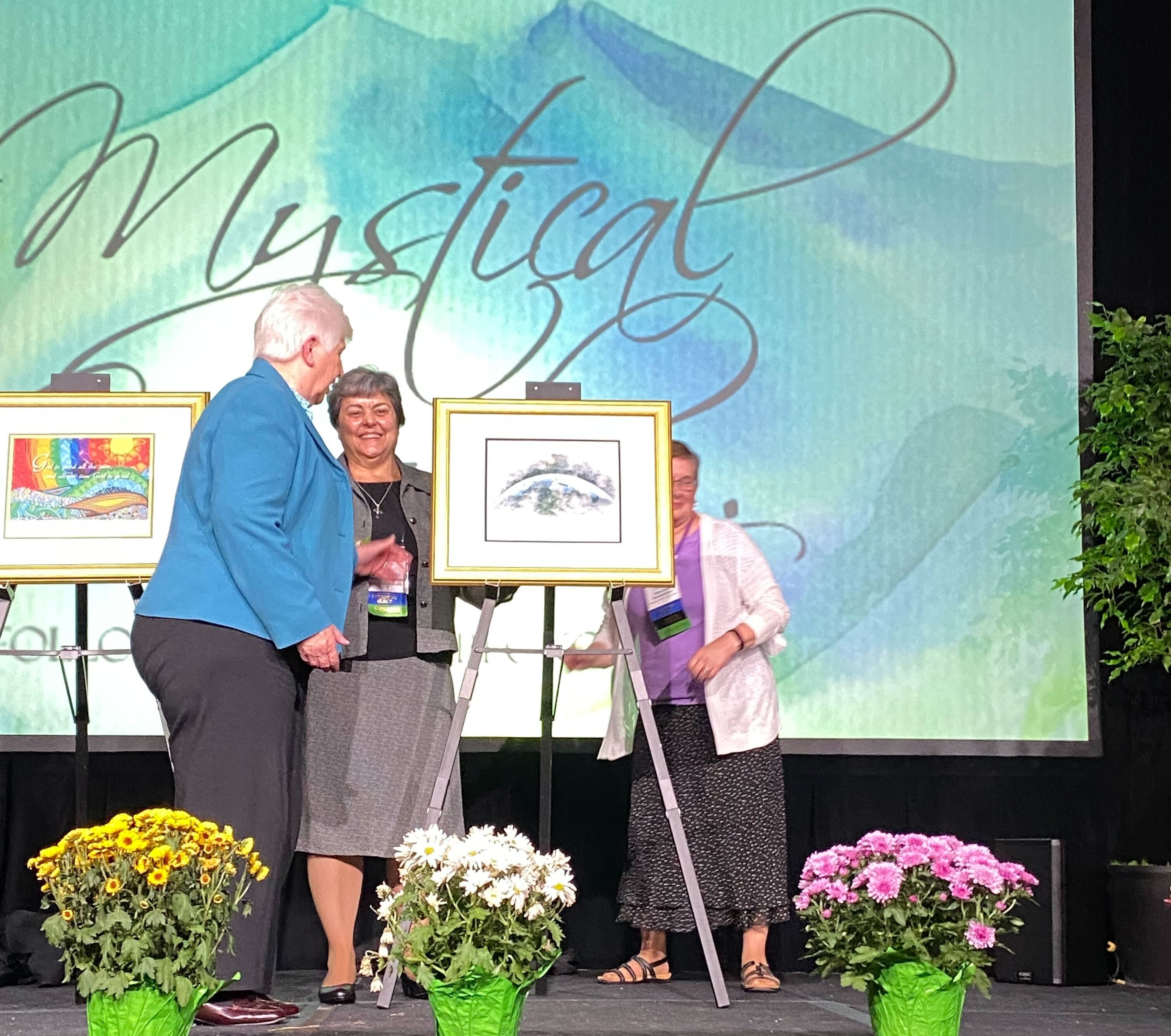 Loreto Sr. Patricia Murray, the 2022 recipient of the Outstanding Leadership Award, is executive secretary of the International Union of Superiors General. She was the founding executive director of Solidarity with South Sudan. (Photo by Helga Leija)

Murray's tribute video highlighted her upbringing in Ireland, her ministries around the world — including her work as the founding executive director of Solidarity with South Sudan — and her thoughtful disposition in leadership. "As Pat says, 'There’s always a way around,' " the video said.

Coming from "the land of poets, writers and musicians," Murray turned to her homeland of Ireland in offering reflection and gratitude for the honor. She read aloud the poem "Postscript," by Irish poet Seamus Heaney, which explores the themes of nature, time, and experiences that cannot be replicated, ones that "catch the heart off guard and blow it open."

The poem is Heaney's invitation to "make the time to visit our own landscapes," Murray said.

"So, I ask you tonight, what landscapes inhabit your hearts and minds?" she asked, whether they be physical places or "contexts" shaped by conversation, memory or art. "Contemplating our inner and outer landscapes will lead us to know who we are to be, as women religious today, and what we are to do."

She offers three landscapes she's contemplated, the first "a global interconnected one," in which sisters rise to Pope Francis' call "to create a culture of care as a path of peace." To be in solidarity with and promote the dignity of those on the margins around the world — the migrant, the trafficked, the exploited and even fellow sisters in danger for their work — Murray said, "This is what we sisters do across the global landscape."

Second, she considered the "synodal landscape," quoting James Joyce's "Finnigan’s Wake": " 'Catholic' means 'here comes everyone'." Though the synodal journey and true inclusion of all in the church will be "messy, cause tensions and require patience, it is a wonderful moment of awakening, of recentering, calling us to a new kind of faith where all vocations are being reconfigured."

Finally, Murray reflected on the landscape of "luxurious diversity," which is a source of beauty and makes life worth living.

As members of religious congregations with a purpose and charism, "How can we bring a positive contribution to the challenge of global intercultural living?" Murray said. "I believe we can demonstrate a new way of relating with the other, within our religious communities and within local and global contexts, so that we can embody a hopeful perspective for future life in the world, which is based on the values of solidarity and justice and dialogue."

The global network of sisters and inter-congregational projects emerging today, she concluded, are "witnessing prophetically to the oneness of humankind," an extension of the Pentecost where the spirit is the one "unifying us in our diversity and diversifying in our unity," a challenge for daily living.

Murray quoted the Spanish philosopher José Ortega y Gasset: "Tell me the landscapes in which you live, and I will tell you who you are."

"May the inner and outer landscapes that we inhabit or that inhabit us continue to catch our hearts off guard and blow them open," she closed. "There with our passion for Christ, and our passion for humanity, we will know who we are to be and what we are called to do."

This story appears in the LCWR 2022 feature series. View the full series.