"I found heaven," Agnes Russo said definitively, as she described the Little Sisters of the Poor Queen of Peace Residence, her home of 17 years.

Each of the women was greeted with applause as she entered the spacious community room and was introduced to the gathering of family, staff and volunteers. Students from Kellenberg Memorial High School escorted the honorees and helped them get settled at the head table.

The celebration included live music, dancing, fruit punch, cake, ice cream and certificates of recognition from state Sen. Tony Avella. Each of the exquisitely dressed honorees was invited to share a few words. Gratitude was a common theme in their brief reflections.

Queen of Peace is in a residential neighborhood at the eastern edge of the New York borough of Queens. The Little Sisters of the Poor opened the facility in 1970 and have cared for 1,240 elderly men and women there, including the 81 current residents. Twenty sisters and 95 employees serve the residents, with help from volunteers and young women in the Little Sisters' novitiate, which shares the compound.

Queen of Peace provides long-term care for the aged poor, consistent with the vision of St. Jeanne Jugan, who founded the Little Sisters of the Poor in 1839. The congregation's mission is to "offer the neediest elderly of every race and religion a home where they will be welcomed as Christ, cared for as family and accompanied with dignity until God calls them to himself."

Mother Celine Therese Vadukkoot, superior of Queen of Peace and president of its board of trustees, said: "We want our residents to be happy here and enjoy life in our home."

Sister Sheila McLoughlin, the director of nursing, said Queen of Peace differs from other nursing homes because of the charism and spirit of the congregation and the way the sisters work together with employees, volunteers and residents to create a family spirit. "Everyone can take care of somebody, but if you're grounded in faith, you're also serving the Lord," while you're working, she said.

"And we're here for the residents 24/7," McLoughlin said. "Our convent is upstairs. The sisters start their day with prayer and have a strong prayer life, communal life and apostolic life."

The sisters also take a vow of hospitality, which permeates everything they do, she said.

Queen of Peace includes 28 independent living apartments and 53 single rooms with private baths in a skilled nursing environment. There is an infirmary in the building and residents are taken to the hospital, "if they will get well," McLoughlin said. There is a tender focus on end-of-life care, manifested in a commitment to never leave a dying resident alone.

Most residents are Catholic and Mass is celebrated daily in the two-story chapel. "The majority come to us because they're Catholic and want to be with the sisters and have someone praying with them when they're dying," she said.

Volunteer Mary Frost said her mother "was happy at Queen of Peace from Day One. The sisters sang her to heaven nine years later at age 103."

Frost, a trained gerontologist with experience as a nursing home ombudsman, said the dignity and respect she saw at Queen of Peace made it easy to recommend it to her mother. "On my very first visit, I was impressed that there was no odor and everyone was dressed, each had their own room and bath, and many people brought their own furniture," she said.

The group party was Mary McQuade's third celebration since she became 100 Jan. 3. The retired nurse who worked in retail until she was 86 said, "When I became 100 years old, I couldn't believe it myself. I don't feel any different than when I was 25. The years add up, but you don't know it!"

McQuade reads voraciously and is currently enjoying a biography of John Adams. She is partial to author John Grisham. She said the people at Queen of Peace have become a new family for her. "We all eat together and the food is very nice. I go to Mass every day that I can," she told Catholic News Service.

Kevin McQuade, her son, said the staff is "very attentive, very joyful and everyone goes out of their way to help. The care is very pragmatic. They don't over-medicate and they let the residents live their lives with tremendous dignity."

The 2015 operating budget for Queen of Peace is $6.6 million, according to Katharine Ogonek, director of development. In addition, $1 million to $3 million is needed for capital projects. While 98 percent of the residents are eligible for Medicaid, payments from Medicare and Medicaid cover only 40 percent of the budget. The rest is raised through parish appeals, direct mail, private donations and fundraising events, including a GermanFest in January.

"When you take care of the poor, you have to have faith that people will support the mission who will never use the facility," Ogonek said. "You can't buy your way in here. It really is for the poor."

Marianist Brother Michael Gillen accompanied the student volunteers from Kellenberg Memorial High School, a Marianist school in nearby Uniondale. "We've been coming here for 26 years. The teens socialize and create a relationship with the elderly and give them the same respect they would want to have," he said.

Kellenberg junior Michael Duffy said, "There's a school focus on community service and I enjoy it. We mostly come here for dances, but also bring presents and joy at Christmas." Kellenberg partners with Queen of Peace for a "Junior-Senior Prom" in February.

The Little Sisters of the Poor congregation is in a legal battle over its refusal to provide contraceptive coverage to its employees as required by the U.S. Department of Health and Human Services under the Affordable Care Act.

Mother Margaret Regina Halloran, provincial of the order's Brooklyn province, said she hoped they would get a permanent injunction against enforcement of the mandate. "It's not our life to have to do that," she said. 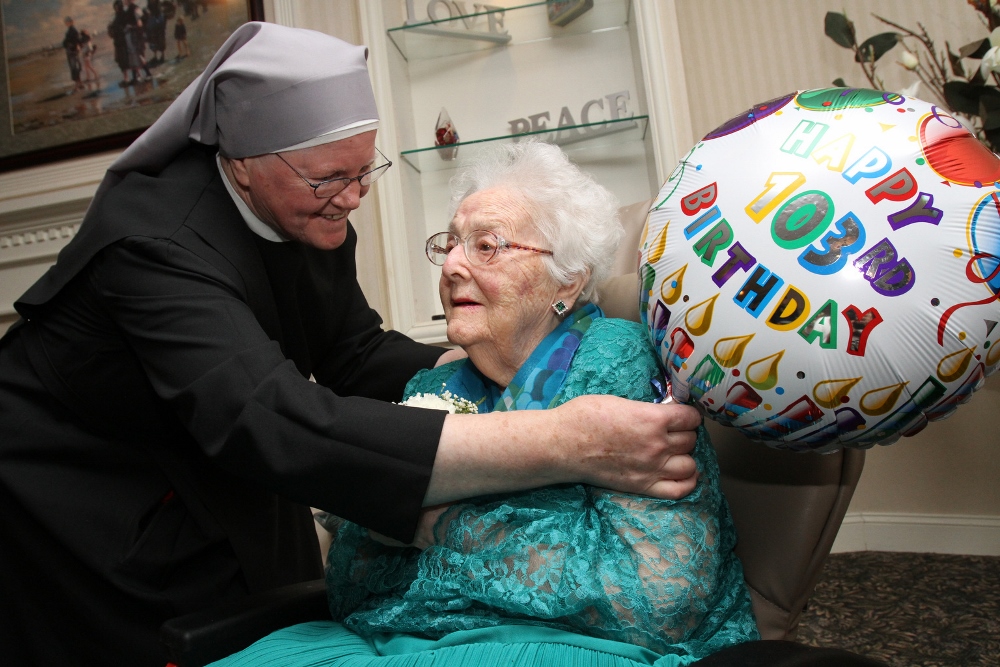 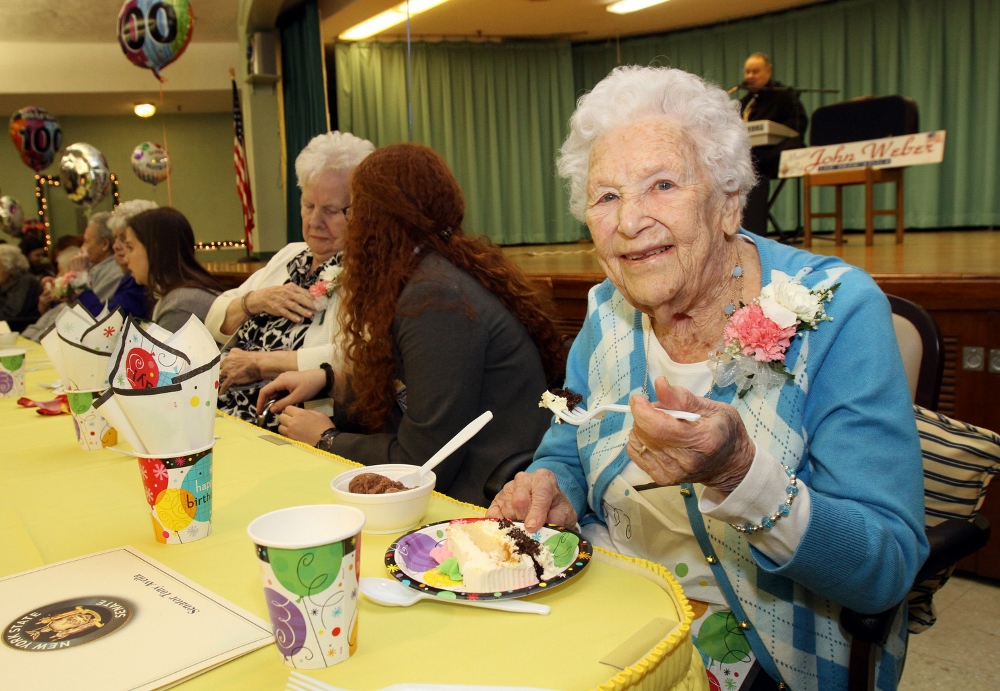 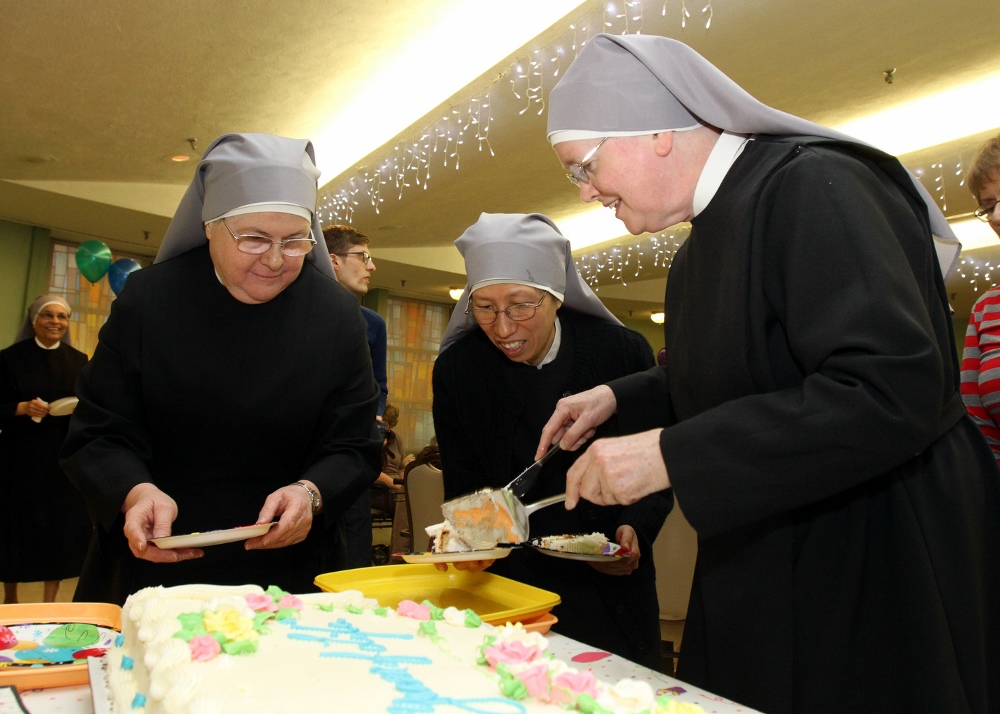 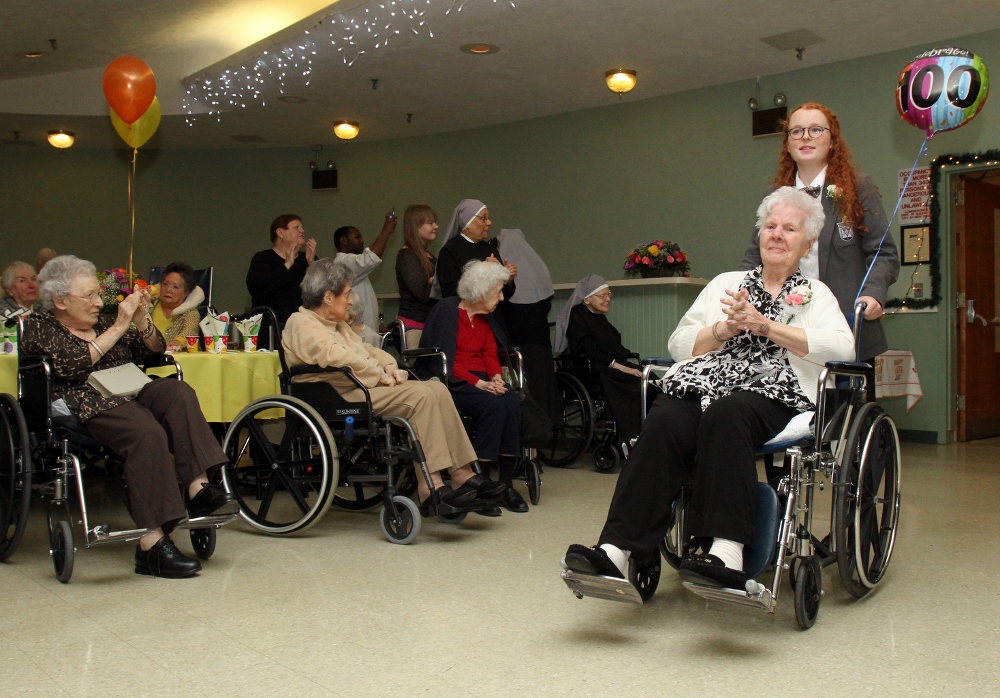 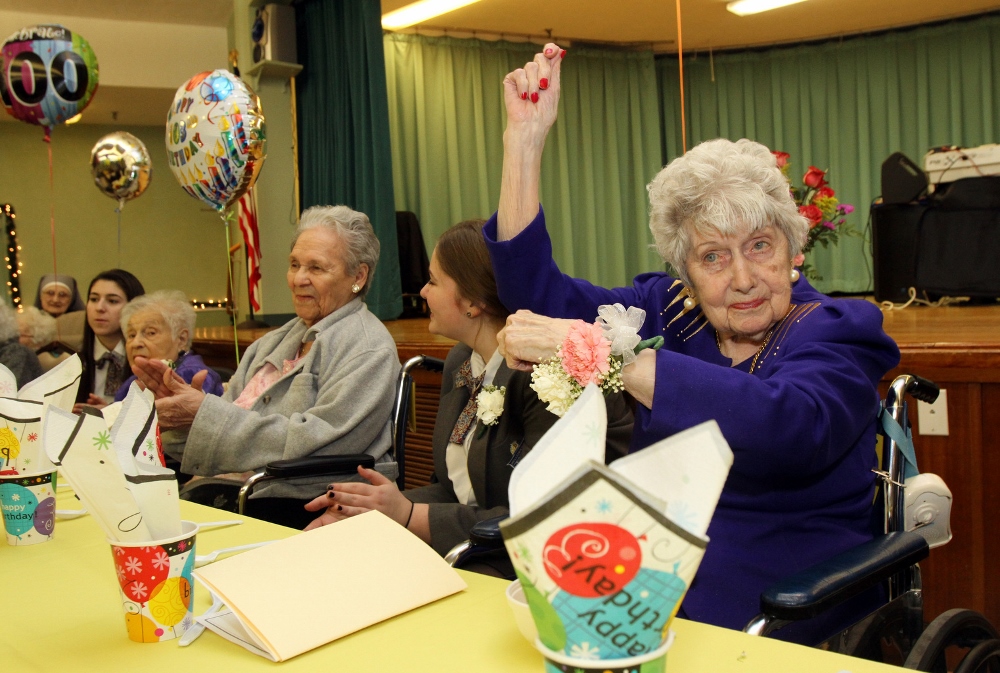