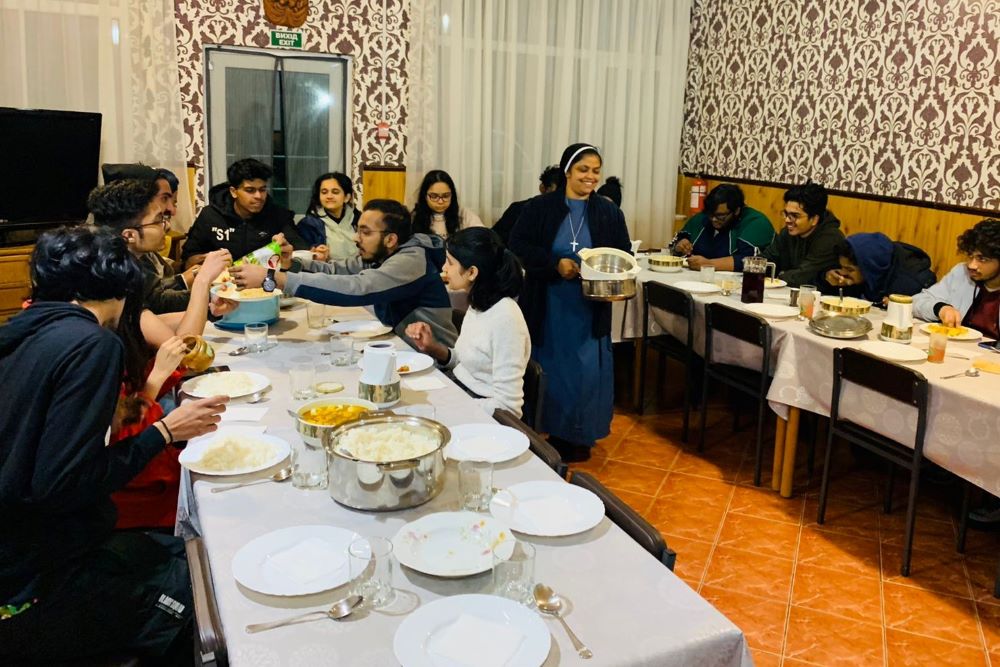 The Sisters of St. Joseph of Saint-Marc at Mukachevo, Ukraine, serve food to rescued foreign students before helping them to cross the border. (Courtesy of Ligi Payyappilly)

An Indian Catholic nun and her associates are working round-the-clock to help stranded students and others fleeing war-torn Ukraine.

"God is using me to save people from death in Ukraine," said Sr. Ligi Payyappilly, the 48-year-old superior of the Sisters of St. Joseph of Saint-Marc in Mukachevo, Ukraine.*

Payyappilly, who is Indian, and 17 sisters of her congregation are giving shelter and food to the distressed students, besides helping them cross the Ukrainian border to escape to countries including Hungary, Romania and Slovakia.

"Being in Ukraine for over 20 years, I have a lot of contacts and networks that helped me carry out this mission so far," Payyappilly told GSR by phone after midnight March 3, just before her scheduled two-hour sleep. Her convent in Mukachevo in western Ukraine is some 480 miles southwest of the national capital of Kiev.

"We never thought we would be alive now,” said Vignesh Suresh, a third-year student of medicine who hails Payyappilly as "God's angel who came to help us when we were totally lost."

Speaking to GSR en route to Bucharest by train, Suresh said he and 45 other Indian students were stranded at the Polish border for 15 hours when Payyappilly and Sr. Christina Tymurzhina, a Ukrainian, came to help them.

"The sisters took us to their convent in their vehicles, hugged each of us with their love and warmth, gave us food, a warm hall to sleep in and escorted us in the morning to cross the Romania border," Suresh said as his friends slept on the train. 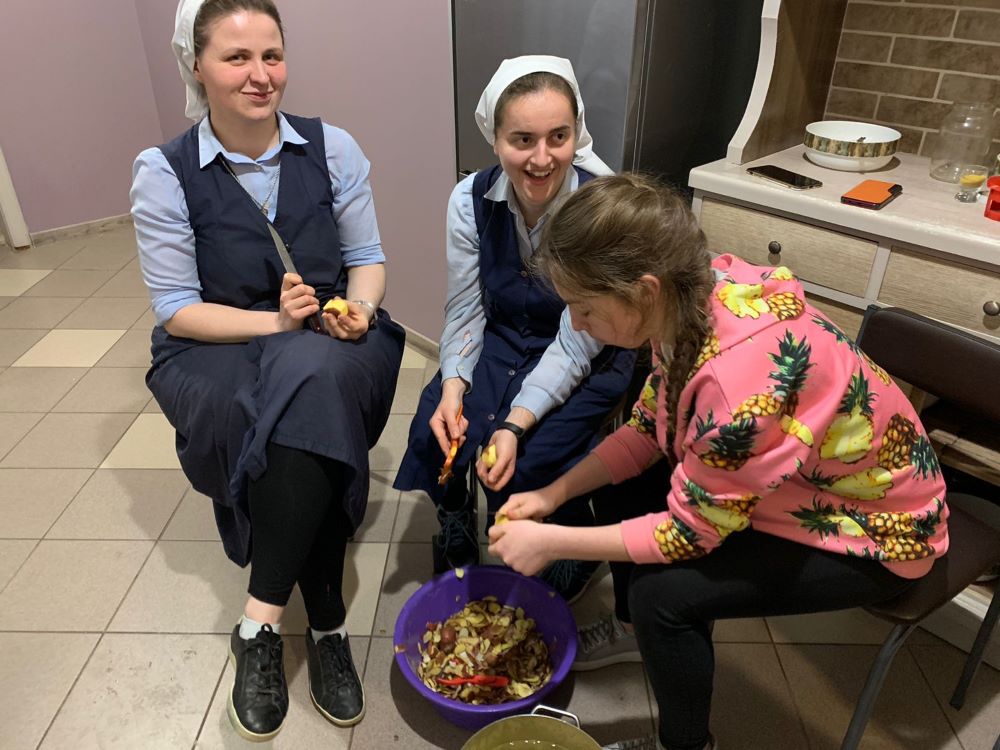 Ukrainian Sisters of St. Joseph of Saint-Marc work with a volunteer in the kitchen at their convent in Mukachevo, Ukraine. (Courtesy of Ligi Payyappilly)

Payyappilly said Suresh was among about 1,000 foreign students her convent has helped so far.

Other congregations are also involved in rescue operations but they mostly help fleeing Ukrainians, whose numbers have reached more than 1 million, according to U.N. estimates.

Other congregations have shared Payyappilly's contact numbers with the foreign students stranded at various locations. "Since there were many to support Ukrainians, we opted to help foreign students, a lot of them being Indians," Payyappilly explained.

Since the start of the war Feb. 24, the Russians have targeted Kiev and Kharkiv, the second largest Ukrainian city, killing at least 752 civilians and triggering mass exodus, according to the U.N. estimates. Unverified reports from the Ukrainian government put the toll at several thousands.

Russia, meanwhile, confirmed March 2 that about 500 Russian troops have died and 1,600 have been injured, National Public Radio reported.

Payyappilly said she could reach out to the stranded students because she knows "every nook and corner" of Ukraine.

India initially helped the rescue operations for about 20,000 Indians, many of them students, through its embassy in Kiev, which was closed as the two cities were targeted. It then asked students to reach the border on their own. Many students have walked at least three days to reach the Polish border, but they were not allowed to cross.

"There were cases of police stopping foreigners from boarding trains to help Ukrainian women and children reach safer locations first," Payyappilly said, quoting students and media reports. She acknowledged that she could help evacuate the foreign students only because of aid from Ukrainian citizens.

Payyappilly is also a retreat preacher; people throughout Ukraine used to come to her convent and an adjacent retreat center for prayer. "People know me well," she said.

Many Ukrainian refugees stay at the convent, which they consider a relatively safer place, instead of going to another country.

The Ukrainian government had recognized the contributions of Payyappilly, a native of Kerala state in India, and made her a citizen.

Payyappilly says all her sisters in Ukraine are involved in helping the stranded. "Some work in the field, some cook and others bring the students to the convent and the border in vehicles." Many arrange for the fugitives to stay at the convent.

Tymurzhina has coordinated several evacuation tasks through her contacts with government officers and volunteers.

"Both of us drove the students to the border, coordinated with the volunteers and the Indian embassy officers at the borders of Romania, Hungary and Slovakia and facilitated their easy passage to those countries," Payyappilly said.

The superior said about 100 Ukrainian fugitives are staying with them. "We are not sure when they would return to their places," she said. "But the students stay with us for only a night," she added.

She said most students reached them in a desperate state. "They had not bathed for many days or eaten food. They were mentally shocked and physically weak. So, our first priority was to give them a comfortable stay before taking them to the border," Payyappilly said.

Their convent, which is two or three dozen miles to the border with Romania and Hungary, has been so far.

Payyappilly said the sisters are flooded with phone calls from panicked parents after a Catholic website in Kerala published information about their services.

The students have shared the nuns' hospitality and support through audio and video clips on social media platforms.

In an audio clip to the nuns, the mother of Vishnu Manoharan, a Hindu boy, says she is indebted to them for the "motherly loving care for our children" when they were in deep crises.

She also hailed the nuns as "truly God's messengers" on whom God's blessings will remain always.

Meanwhile, Suresh and his team reached Bucharest in Romania and was on the way to a shelter home. He said another convent inside Romania helped them with food, water and immigration procedures. "It was another miracle," he added.

Payyappilly said once the people cross the border safely, they consider the mission accomplished and look for other lost ones in Ukraine. "So, we never attend their 'thank you calls,' but attend only the calls in distress," she said. "God had saved me from death 20 years ago and is using me now to help others from deaths in Ukraine." 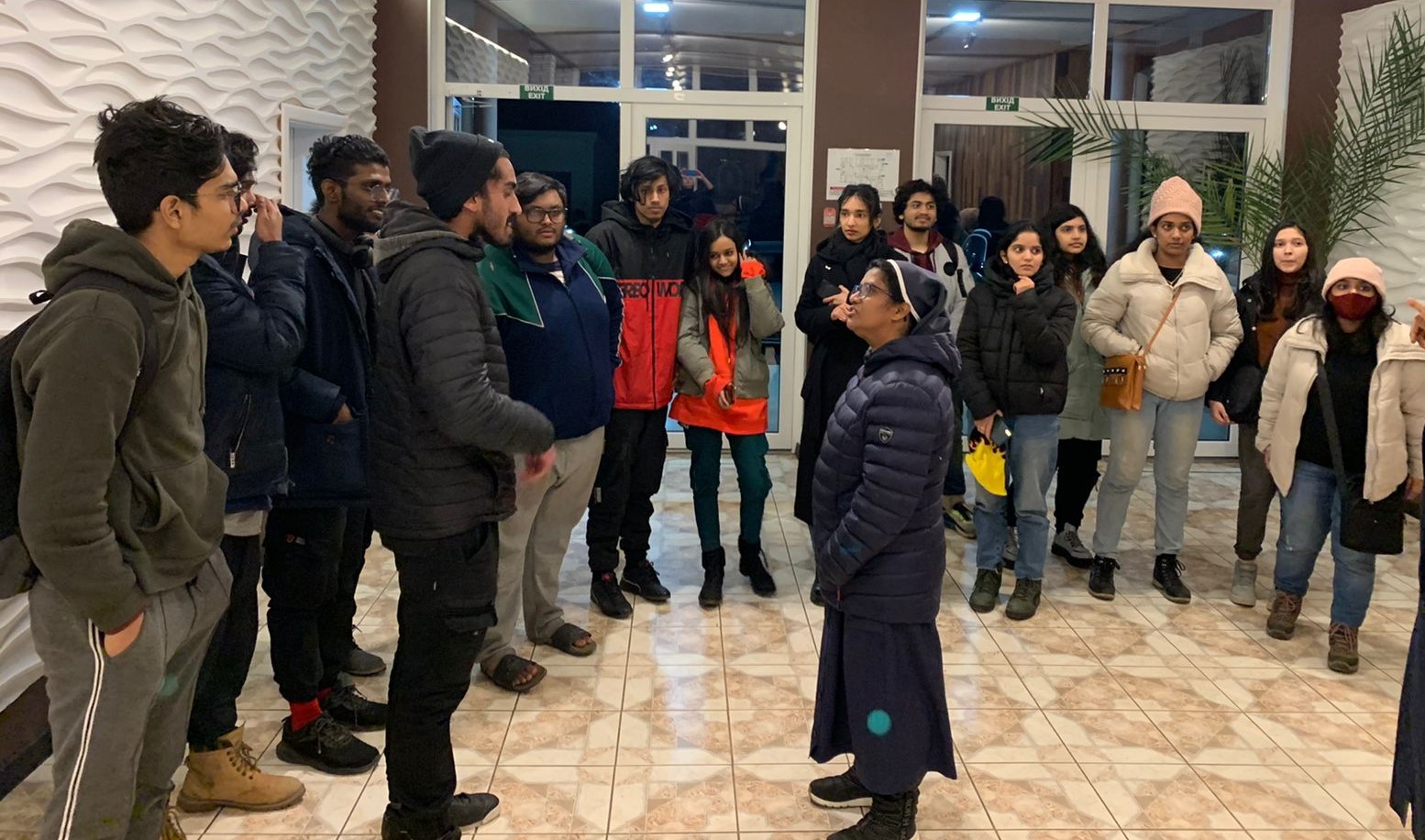 Payyappilly was severely affected by chronic spinal tuberculosis and was suffering in bed for almost a year until “God touched and healed me.”

She recalls praying almost 10 hours a day before the Blessed Sacrament during her illness. "I have enough strength to attend to many more people in Ukraine now," she said during the hourlong telephone interview.

The convent in Ukraine was started in 1998; Payyappilly has served there for the past 22 years. Her preaching at retreats has drawn many young Ukrainian women to her congregation. Currently, 15 Ukrainian nuns serve in various ministries.

"We have never done any vocation promotion camps or recruitments, but they came on their own," Payyappilly said. All Ukrainian nuns are professionally qualified in various fields, she said. The convent also has two more Indian nuns.

Latin Rite Catholics are the minority of the Catholics in Ukraine, most of whom belong to the Eastern Rite. The majority of Ukrainians belong to some form of Orthodox Christianity.*

* This story has been updated to remove the dateline as the reporter was in India, interviewing the sister in Mukachevo, Ukraine. The last paragraph was also clarified to convey the context of Latin Catholics amid the dominant religion in Ukraine.