Q & A with Sr. M. Elise Kriss on 27 years as a university president 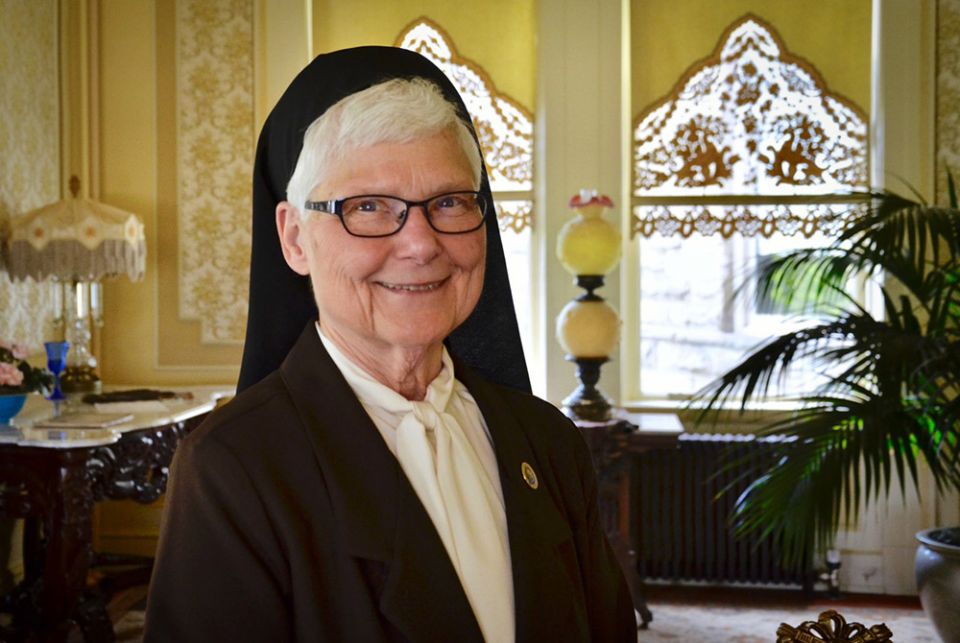 Sr. M. Elise Kriss, president of the University of St. Francis in Fort Wayne, Indiana, will retire June 30 after 27 years as president and 37 years there total. A member of the Sisters of St. Francis of Perpetual Adoration, Kriss is seen here in on campus May 8. (GSR photo / Dan Stockman)

Fort Wayne, Indiana — It may be impossible to overstate the mark Sr. M. Elise Kriss has left on the University of St. Francis.

It's easy to be skeptical of such claims, but consider how the university — a sponsored ministry of Kriss' order, the Sisters of St. Francis of Perpetual Adoration — has changed in the 27 years she has been president.

Its name changed from St. Francis College; enrollment more than doubled to more than 2,200 students and it acquired the Lutheran College of Health Professions, giving it 600 new students and eventually bachelor's and master's degrees in nursing. The university's endowment grew from $2.2 million to $34 million and net assets increased from $6.8 million to about $98 million, Saint Francis Magazine reports.

Facilities and buildings have been added, including the football stadium, the campus ministry center, a health science center, an arts building, two residence halls and a freestanding chapel. Other buildings have been renovated or expanded. The campus has grown in all directions and added a location in downtown Fort Wayne. She pushed to start a football team, which went on to win two National Association of Intercollegiate Athletics Division II national championships.

And that is only during her time as president: She held positions such as undergraduate dean and academic vice president for 10 years before she became president in 1993.

But Kriss, 72, will retire June 30 and be replaced by Fr. Eric Zimmer, the first time someone other than one of the sisters will be president since the school's founding in 1890.

Kriss was taught by the Sisters of St. Francis of Perpetual Adoration for most of grade school at Saints Cyril and Methodius school in North Judson, Indiana, and went to their high school at the motherhouse in Mishawaka, Indiana. She earned both her bachelor's and master's degrees in education at St. Francis.

GSR: You're a prominent figure in the community and a rock star on campus, and the adulations have been pouring in since your retirement was announced. What's that like for someone trying to live a life of humility?

Kriss: I'm kind of used to being in the limelight because I've been in this position so long, so it's actually kind of fun going through it. This issue of Saint Francis Magazine is all about my work here, so it's kind of nice that will be the last thing people see of me. The next one will be all about the new president.

As president, you can't hide yourself. I had to do the role; I can't go hide in the chapel. So I have my prayer time and my community of sisters, but the rest of the time, it's being president.

There's external organizations I'm involved with, student events, faculty involvements. It's not your typical image of a sister, but I'm used to being out there.

Obviously, there's no way you could have imagined your last semester would be marked by a pandemic and converting the entire campus into an online operation.

I haven't really thought about it that way. We're still in the heat of it. We're full-on COVID here.

Running a college is like running a city, there's so many aspects to it. With COVID, everything went online. Every event, including commencement, was canceled. I was really looking forward to my last commencement. It's the highlight of our year anyway, so there's some loss there, but you also don't have time to think about it.

Honors events, pinning ceremonies, the play, all the end-of-semester events, all that was canceled. But somehow it didn't clear my calendar. It's still full up.

And everything still seems up in there air as to what you can — or should — do.

Now, we're preparing for the fall, and how do you bring students back in a climate like this? It's going to be hard to try to control behavior that's not going to be healthy. Will there be a football season? We don't have any clarity on that yet.

Fortunately, we don't know of anyone — staff, faculty or students — who has been infected.

Three of the biggest changes for the university came in 1998: the name change, the acquisition of the health programs and the addition of football.

Those three things all in one year gave us a different feel and role in the community. But what I'm most proud of is that 97.1% of last year's graduates are either employed or going on for more education. That's all the work the staff and faculty do — I didn't do that.

Do you think having such a prominent role has changed people's perception of sisters?

I suppose it gave people a new impression of what a sister does, but you'd have to ask community members. I think I felt welcomed in the community and even wanted. I don't know how people see me, but as president, I try to bring who I am as a sister to what I do.

There's a lot of challenges in this world, and we have to rely on the guidance of the Spirit. I've done my best, but I've not always been totally successful, but that's life. I'm not perfect in everything, and a lot of humility is required sometimes.

And yet you're one of only two sisters I know of who've been made into a bobblehead.

It's fun — not everyone gets a bobblehead made of them. It was for football: If you came to a game, you got a bobblehead. They did it twice. The year before, it was football coach Kevin Donley, and then it was me. There might be a couple in a box somewhere, but I don't know where all they went. One of our sisters saw one in a thrift shop once.

[Dan Stockman is national correspondent for Global Sisters Report. His email address is dstockman@ncronline.org. Follow him on Twitter or on Facebook. He occasionally works as an adjunct English instructor at the University of St. Francis.]

Ministry | Q & A with Sr. M. Elise Kriss on 27 years as a university president