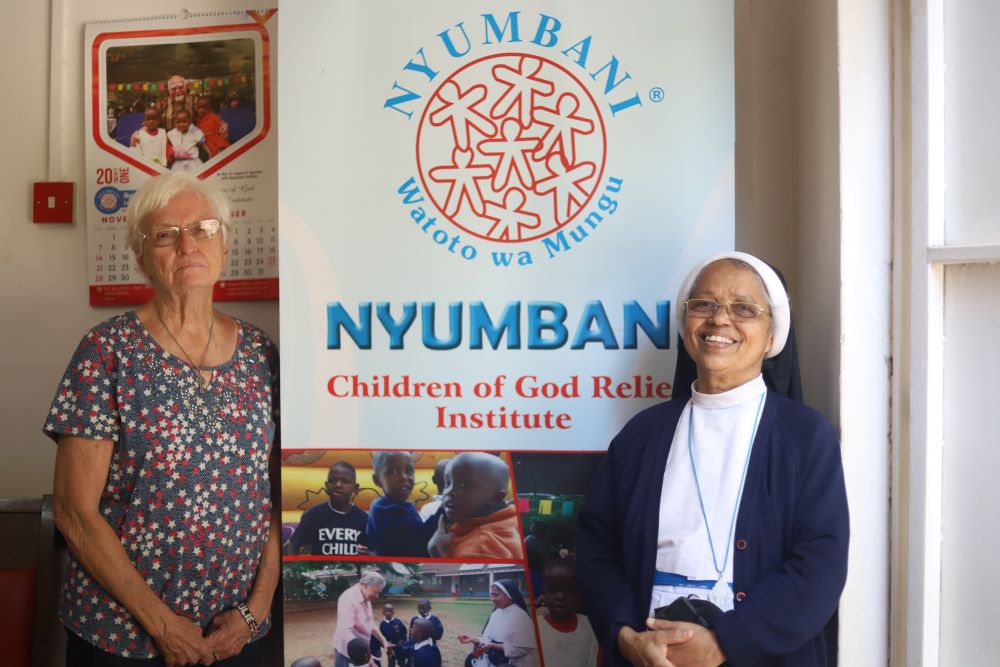 Sr. Tresa Palakudy of the Sisters of the Adoration of the Blessed Sacrament, right, poses with Sr. Julia Mulvihill of the Sisters of St. Francis of Philadelphia at Nyumbani Children's Home for orphans living with HIV/AIDS. Palakudy, a nurse from India, has ministered in Kenya since 1994. (Wycliff Oundo)

Kenya experienced a massive shortage of antiretroviral drugs (ARVs), threatening the lives of HIV/AIDS patients. Because many patients lost jobs, they couldn't eat a balanced diet crucial to boosting their immunities. The government also diverted money donated for HIV/AIDS patients to fight the pandemic.

However, Sr. Tresa Palakudy of the Sisters of the Adoration of the Blessed Sacrament never gave up on the children she cares for at the Nyumbani Children's Home, an orphanage for children living with HIV. She reached out by providing ARVs, shelter and food so that they could withstand their intense medical treatment.

Palakudy, a trained nurse, first came to Kenya in 1994. She said her apostolate's call motivated her to care for children living with HIV/AIDS in poor communities. "It's a call, and I had to respond and help these children during the pandemic," she said.

Before arriving in Kenya, Palakudy worked for about 25 years in hospitals in her home province of Kerala in northern India. Nothing, however, could have prepared her for the burden of stigma that HIV-positive people bear in Kenya. She joined the children's home in 1996, working as a matron and chief nurse before becoming program manager, a position she still holds. The home serves 97 children with a staff of about 40 workers.

The home, which began in 1992, is southwest of Nairobi's central business district. It was founded by Fr. Angelo D'Agostino, an American priest and doctor, and Sr. Mary Owens, a nurse, who observed that Kenyan orphanages weren't accepting HIV/AIDS-positive children. About 111,500 Kenyan children live with HIV, according to UNICEF.

GSR: What inspires your vocation to care for children living with HIV/AIDS?

Palakudy: I believe I am called to commit and serve the people of God in this nation. When I was invited in 1995 by Fr. D'Agostino to visit Nyumbani Children's Home, I came and found that the children needed our help.

In the early days when the center had just started, I cared for many sick children. Back then, ARVs were not as available as they are today. Caring for these children was why I stayed here. I would see the grace of Jesus in their suffering faces. Without this grace from the Lord, I would not have lasted long. It would have been easier to pick somewhere else with much easier commitments.

When one cares for these children, they become a part of your family. When we would lose them in the early days, it would hurt. Especially as a medical practitioner when you took a vow to save and protect life. 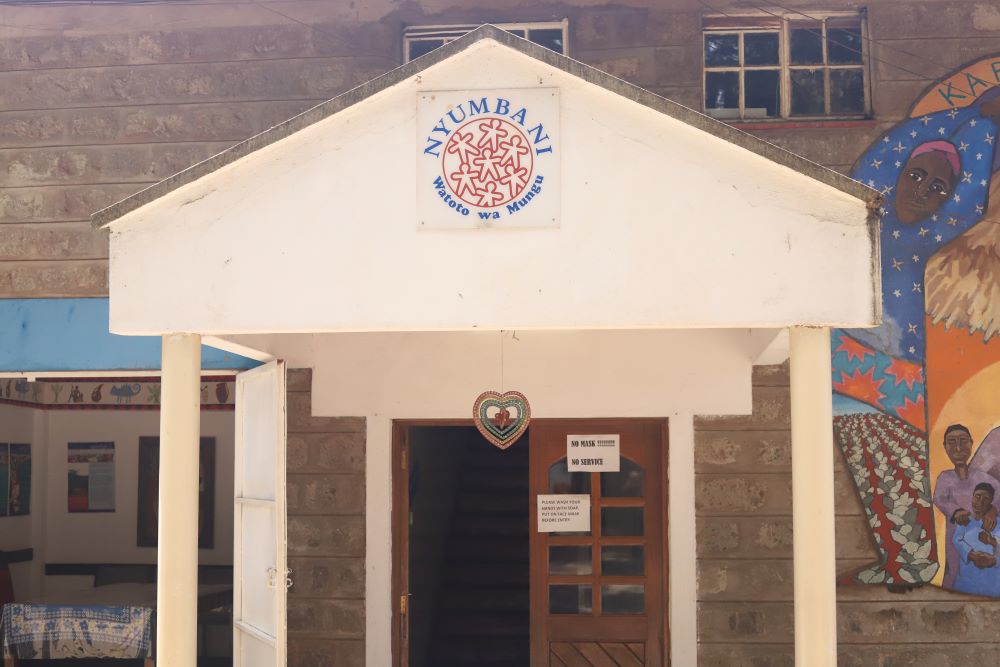 What are some of your earliest memories of the struggle to combat the spread of HIV/AIDS in Kenya?

When I joined Nyumbani Children's Home in May 1996, it was not as established. It was a one-building facility where we cared for about 19 children who were very sickly and in dire conditions. There were no ARVs back then, so one after another, they went to God.

We lost around 60 of them. Some of the children were very close to us, and it was heartbreaking for us to see young children dying because they didn't have access to medicine.

Eventually, Fr. D'Agostino was sick and tired of burying children. So, he launched a campaign for the government to acquire and distribute ARVs to HIV/AIDS patients and orphans. He also lobbied for the pharmaceutical companies to reduce the price of medicine so that people living with HIV/AIDS could afford it. Ultimately, the government recognized his efforts, and the ARVs were brought to Kenya.

We started our ARVs trial prescriptions for a few children in 1999 because a dose was still expensive back then. After 2004 we got more ARVs free of charge because of the PEPFAR initiative by President George W. Bush to provide emergency relief for HIV/AIDS patients in developing nations.

The initiative enabled us to access to ARVs until we completed construction for this home. We now get our ARVs supply from KEMSA (Kenya Medical Supplies Authority).

The death rate of children living with HIV/AIDS has gone down. Our last death was in 2008.

What are some of the challenges you experienced caring for the children when COVID-19 hit?

Schools had to be closed, and visitation to the center was limited. The children lost a whole year from school since they had to stay put in the compound. The pandemic also drastically reduced our local donations because of the visitation restrictions and its severe economic impact on business.

Amid the COVID-19 pandemic, how did you manage the home to keep the children safe?

We didn't allow people to visit the kids after the government closed schools to control the spread of COVD-19. We allowed the children to stay in their cottages under the supervision of their house parents.

We announced the COVID-19 safety measures and demonstrated them to the staff and children. We ensured they were washing their hands, social distancing and using masks.

Staff members were restricted from visiting the children's cottages to mitigate the spread of the virus. Inside the cottages, the children had creative, engaging activities such as plays and presentations on the COVID-19 regulations, which they demonstrated as art pieces to educate each other and boost their morale.

Later on, when they reported to schools outside the center, a few of the children and the staff got infected with COVID-19. We isolated and treated them, and they recovered, thankfully.

What could the government have done to make HIV/AIDS patients not feel forgotten?

The government could have done better because I think the funding was enough if properly divided and allocated to deal with COVID-19 and HIV while providing ARVs and other medication for opportunistic diseases like malaria and tuberculosis.

There was a lot of stigma for people who had contacted COVID-19 through the pandemic. Do the children experience stigma as well?

Stigma has always been there. The stigma in the children's minds is powerful. The stigma affects how they take their medicine. When they resume school, they go with their medication. Some children don't take them as instructed, and we notice that the viral load goes up.

We have counselors who tell them to treat HIV like other chronic diseases whose patients take their drugs without fear.

The church, politicians and lectures need to speak openly about HIV and discourage its misconceptions and stigma.

What achievements have you realized during your tenure as program manager?

When you see children healthy, that is a success. When I had just started, we never thought that they would become adults. They were all so young and sickly that I had to carry them around.

Now when I look at them, they are all healthy.

We send the kids to school from a tender age at the center's preschool. According to their ability, a teacher teaches them the basics before sending them to primary school, high school and colleges. When they leave the center, they can reach for wherever they want.

The center itself has seen so much growth. We started as a small institution. We care for children living with HIV/AIDS outside the orphanage through the Nyumbani Lea Toto Community, an outreach program with clinics in eight Nairobi slums.

This program supports 3,500 HIV/AIDS-positive children and another 30,000 vulnerable children throughout these slums. Another program, the Nyumbani Village in Kitui (a town southeast of Nairobi), features a primary school, a high school, a polytechnic and a medical clinic. It is built on 1,000 acres of land to be self-sustainable and accommodate 2,000 HIV/AIDS orphans and elders abandoned due to the HIV/AIDS pandemic.

We also established the Nyumbani Diagnostic Laboratory to monitor our children's health and generate income for our home.

Looking forward, what ambitions do you have for the center?

I hope that since the number of children being born with HIV/AIDS is decreasing, we will not be needed in this service one day.

How would you advise other religious women who aspire to care for people living with HIV?

If a religious gets a calling to serve children living with HIV/AIDS, I would advise them to follow it. Do not withdraw from that calling because of the challenges. Challenges will always be there, but please go ahead, and God will be with you.