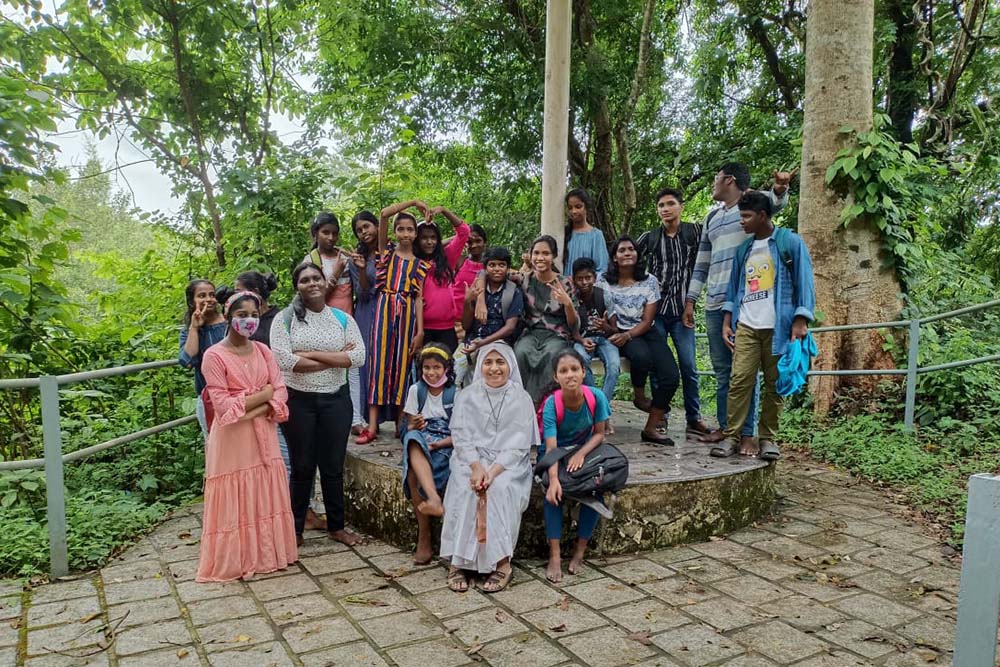 A slum in this southwestern Indian city was once known as the "Enclave of Darkness" because it was the den of thugs, alcoholics, drug runners and psychopaths.

It is now called Udaya Colony (Sunrise Enclave) after Catholic nuns dared to enter it 33 years ago as part of their mission to reach people in the peripheries.

What now welcomes visitors to the enclave in the middle of Kochi, the commercial capital of Kerala state, are buildings of two and three floors, painted with attractive colors, that were once one-room, cramped tenements.

Sr. Anisha Arackal, who led the Sisters of the Destitute to turn the place into an upmarket residential area, recalls the slum's notoriety. 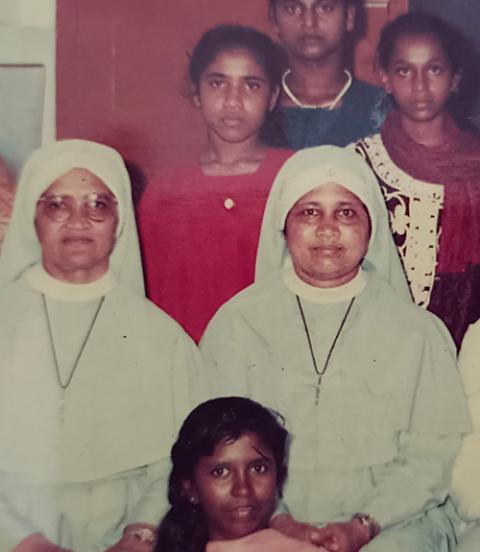 Srs. Redempta Alappat and Navina Pulickal, members of the Sisters of the Destitute, who started the convent at Udaya Colony in Ernakulam district of the southwestern India state of Kerala with children from the slum in Kochi. (Courtesy of Anisha Arackal)

Her congregation's 1979 general chapter decided to help impoverished people and the marginalized on the peripheries, but it took 10 years for the first nuns to enter the Kochi slum. Srs. Redempta Alappat and Naveena Pulickal, the pioneers, started living in the slum in 1989, the year the congregation received pontifical status.

Alappat, 83, recalls reading an article in a magazine asking who will spread light in the enclave of darkness. "I was touched by the article and I approached my provincial to let me go to the enclave, but she did not want me to go. She asked me to wait for a year," said the nun, who was then the headmistress of a school in Kochi.

When the permission came after a year, Alappat and her companion sister found the enclave in a pathetic condition.

"It was quite challenging to live there. However, God, who had inspired me to work for the downtrodden, arranged everything. I spent nine years there," she told Global Sisters Report in March, speaking from her new residence in Ghaziabad, near New Delhi, despite suffering from a vocal cord problem.

Arackal, who was associated with the slum project as a novice after joining the congregation in 1990, commended the pioneers for daring to enter a place where even men feared to go.

Initially, the sisters focused on the children in the slum. The sisters offered them snacks to draw them to their coaching classes.

"The children came more for milk, eggs, biscuits and snacks than to study. But slowly they realized the importance of education and the classes continued without food," Arackal said.

The band troupe hones their skills at the Sisters of the Destitute convent at Udaya Colony in Kochi, India. (Courtesy of Anisha Arackal)

The nuns also helped enroll the children in schools and started a tuition center to help them. "We educate and skill train the children. For school dropouts or for those not academically inclined, we started a concert band," she added.

The nuns trained the children to play the drum, clarinets and trumpets. "They started performing during church festivals and marriages," Arackal told GSR.

She says the pioneers' "deft handling of the children and wise counseling of their parents" brought changes in the slum. Some students have become engineers, lawyers and other professionals, Arackal says.

In the slum, many gave up their ways and started to earn a living. Some sell lottery tickets; some work as daily wagers or rag pickers. A few are garbage collectors, explained Arackal, who had returned to the slum as the convent superior.

She also worked with Prison Ministry India for 20 years. "On my return, I was impressed by the way the people shared spaces and managed conflicts," she said.

But she was worried about water stagnation in the slum, which sits on the banks of a canal that overflows during rains, bringing putrid, black, polluted water into the ramshackle tenements.

Sheeba Vincent, a resident, recalls taking their newborns and toddlers to the convent at night to sleep.

Arackal said the people's plight pained her and she prayed for a solution.

She felt God asking her help rebuild the people's tenements — an unthinkable and improbable task then. "But if the Lord wants it," she said, "surely there will be a way, I thought."

The houses are being rebuilt to raise their height from the ground to provide more space and to keep water from seeping inside. Aside from the houses situated on the banks of the canal, the renovated area is in an upmarket neighborhood in the heart of the city of Kochi, which is the commercial hub of Kerala.

Arackal met a few people to work out a plan. It was during the time the prime minister's housing plan project was launched in 2015, offering 400,000 rupees (about $5,154) to build a house for people in need. 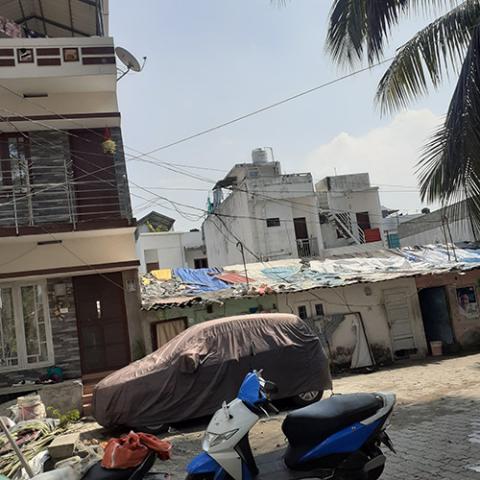 The nuns built the houses with two or three floors on a raised foundation to keep off the rainwater.

Babu Joseph, a retired college principal who helps Arackal, recalls the nuns seeking help from many. "A few philanthropists and some corporate firms who wanted to improve the lot of the marginalized came forward to help," he told GSR.

Arackal says she hopes the Udaya Colony becomes a model for other slums in Kerala. A survey by India's Housing Ministry reveals that 65 million of its 1.38 billion citizens live in slums — about 4.64% of the population. UN-Habitat defines a slum as an area where the residents have no access to proper sanitation, water and a safe dwelling.

Arackal says if her congregation had not upgraded the houses in the Udaya slum, the government would have taken over the area and sent its residents to far-flung resettlements.

The houses have also improved the people's sense of self-worth. "Good houses give people an identity and a sense of worth. They are by no means a homogenous community, yet they are rich in social cohesion," Arackal explained. 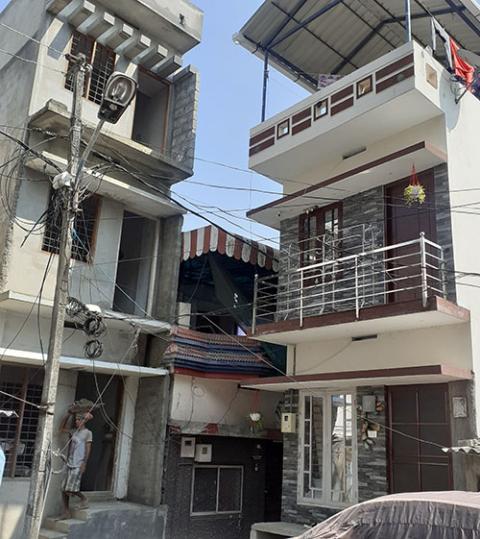 Houses of two and three floors at Udaya Colony in Kerala state's Kochi city have been rebuilt on a raised platform to avoid flooding. The newly built houses cover 326.7 square feet and have a common feature — an internal staircase that keeps the families united. The first and second generations now stay under the same roof. (Rita Joseph)

Some residents are natives of Kerala while others have come from the neighboring states of Tamil Nadu and Karnataka. "People of all faiths live here in harmony," Arackal said.

People take special care to keep their new houses clean. "The rag pickers, they do not bring their collection home. Earlier they used to sort the rags in their settlements," Arackal said. They also bathe before entering their new houses.

Anil Kumar, whose mother was the first to rebuild a house in 2019, said they have a hall and kitchen on the ground floor and two bedrooms, bath and toilet on the first. "We don't have to struggle anymore to avoid dirty water seeping into our houses and fight rodents," he told GSR.

Arackal says they allow the people to design their house and choose their contractor but insist on a strong foundation at least 5 feet high.

A committee ensures that the people meet all parameters.

Arackal's provincial, Sr. Raisy Thaliyan, hails her work as a remarkable service. "Her efforts have helped provide a better living status to the marginalized. This was in keeping with our founder's desire," Thaliyan told GSR.

The congregation was founded in 1927 by Fr. Varghese Payyappilly, a priest of the Ernakulam Archdiocese, to care for the sick, poor and the destitute. 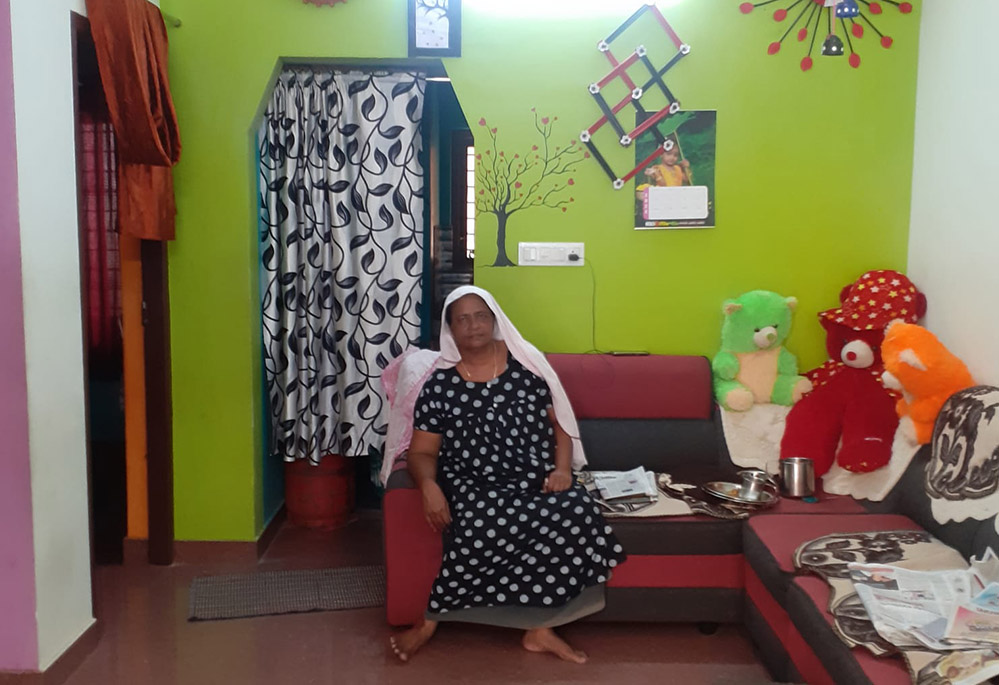 A widow now lives in a new house that her daughter helped build at Udaya Colony in Kochi, India. (Rita Joseph)

Another proud owner of a house is Avinash Ajay Kumar, son of a construction laborer and a student who makes money from band performances. He paid 40,000 rupees ($516) from his income for the construction.

Parthivan Shanmugham, a law student, says the sisters guide them in career choices. "I have mastered the clarinet and from my earnings I support my education," he told GSR.

Many band members have found jobs in the police and paramilitary forces.

Revathi Karupaswami, daughter of a waste collector and one of the five girls in the band, studies economics. "I started with the drum but graduated to the trumpet to improve my chances of becoming an army officer," she told GSR.

Benny Aanamthuruthil, a contractor who has known the enclave for the past three decades, hails the sisters' work as marvelous. He recalled avoiding the slum, a dreaded place, at night as a young man. "Had it not been for the sisters, the people in the slum would have ended up as pickpockets or criminals," he told GSR.

Arackal says they take special care to ensure the people do not stray. "After the morning school, the children practice musical instruments. Thus they are kept occupied throughout the day," she said. 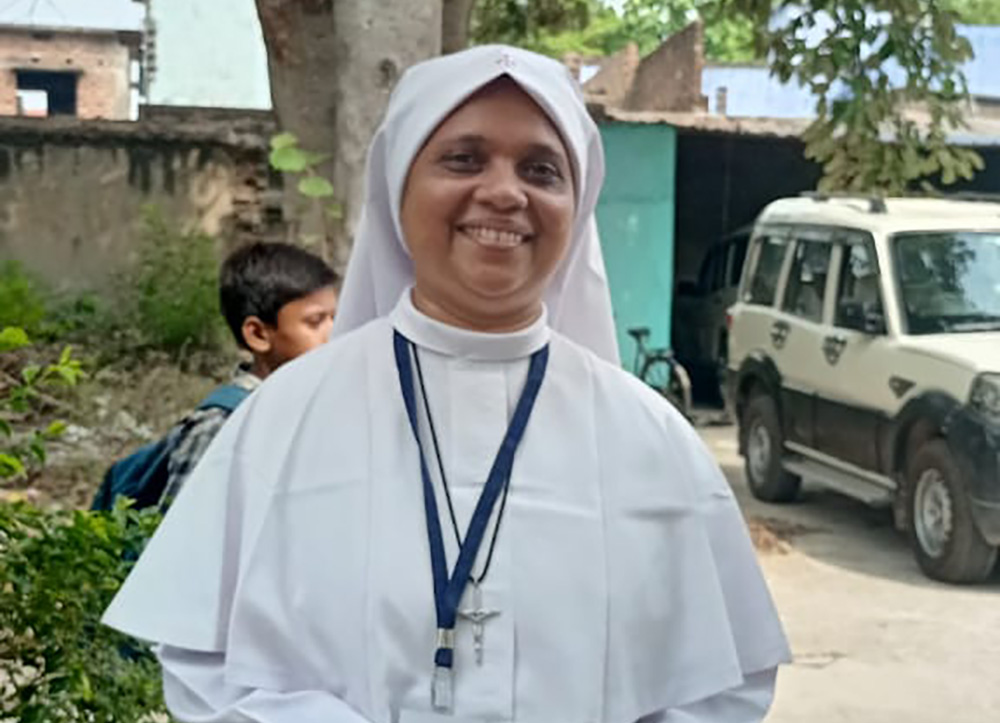 Sr. Anisha Arackal, a member of the Sisters of the Destitute, takes a break during the Jesus Youth Conference in Patna, capital of the eastern Indian city of Bihar. (Courtesy of Anisha Arackal)

During the summer break, the nuns hold camps where games, awareness, motivational and skill training classes are held. They also organize field trips to introduce the children to factories and exhibitions.

In December 2021, Arackal moved to Kerala's Wayanad district, a backward and forested area, to build homes for poor people, and Sr. Soumitha Chittilappilly, a lawyer, succeeded her.

The new superior says her focus is the holistic development of the children since most houses have been built.

The 42-year-old nun and her two other companions — Srs. Laiza Kandathil and Joselma Valliarumpeth — collaborate with nongovernmental organizations and professional counselors to combat behavioral problems among the residents. The nuns also seek government officials' help to prepare the youth for civil services and other competitive exams.

A constant challenge for the nuns is to keep the place drug free, mostly through awareness campaigns and engaging residents in positive pursuits. "The drug mafia is trying their best to penetrate the place, but we have kept them away until now," Chittilappilly added.