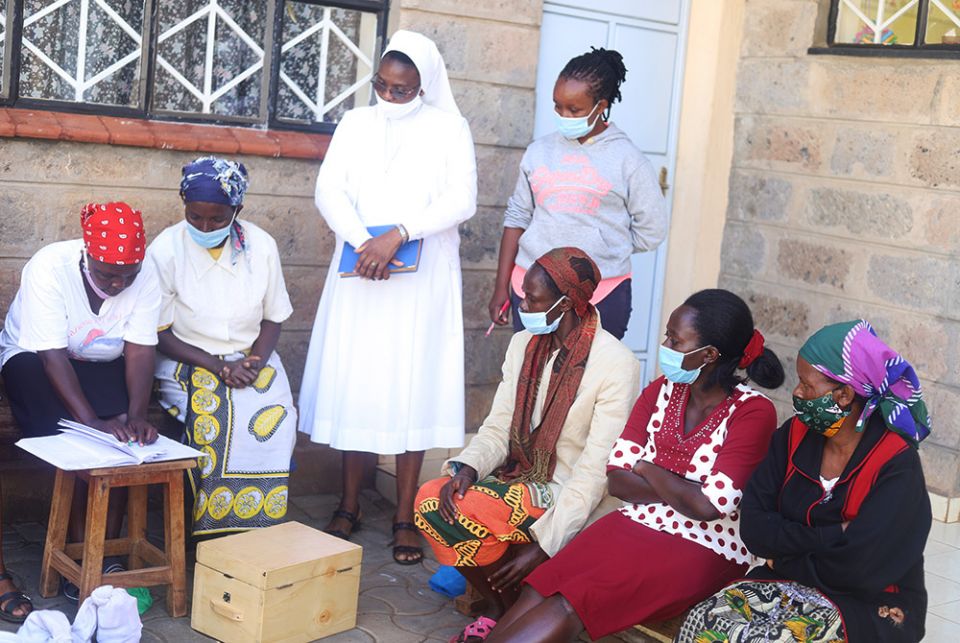 Sr. Gisele Mashauri of the Salesian Sisters of Don Bosco guides women on how to do the table banking in Dagoreti slum on the outskirts of Kenya's capital, Nairobi. (GSR photo/Doreen Ajiambo)

Dagoreti, Kenya — Joyce Nyokabi's happier times began when she started a small grocery business in 2019 in a poor slum district on the outskirts of Nairobi, after she got a loan from Savings and Internal Lending Communities, or SILC, a project run by the Salesian Sisters of Don Bosco to empower poor families.

Before, the 34-year-old mother of four lived in extreme poverty after her husband lost his job as an office messenger at a local baking company. Nyokabi took on odd jobs, working from sunrise to sunset every day, to feed her family and pay school fees for the children.

"Life was very difficult and we suffered a lot as a family," she said, noting that she could only make around $30 (U.S. dollars) monthly from her odd jobs. "We lived from hand to mouth and whatever I made could barely sustain other needs. My husband and children entirely depended on me."

But now, things have changed. She is able to feed her family and save as much as possible to further expand her business. "I'm very happy now and the future looks bright," said Nyokabi, as she cradled her baby. "I now have my own money and I'm able to comfortably cater for the needs of my family. I want to thank the sisters for improving my poor condition." 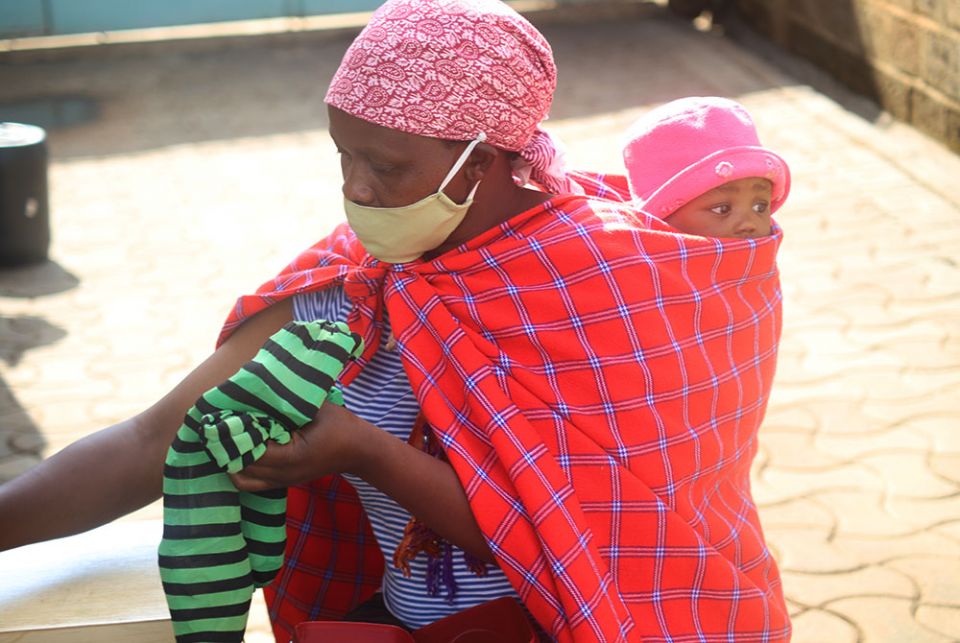 Joyce Nyokabi, 34, carries her child on her back in Dagoreti slum on the outskirts of Nairobi. Nyokabi started a small grocery business after securing a loan from Savings and Internal Lending Communities, a project run by the Salesian Sisters to empower poor families in slums and elsewhere. (Doreen Ajiambo)

Nyokabi is one among hundreds of women entrepreneurs in Dagoreti and other slums that are benefiting from the SILC project started by the Salesian Sisters of Don Bosco three years ago to help alleviate poverty among women and improve the well-being of their children by providing business opportunities as a tool to change their lives.

But poverty remains widespread, particularly in Kenya's slums and rural areas, the report said. Certain neighborhoods in Nairobi and other large cities are home to some of the country's poorest people, and conditions in these slums are incredibly harsh for families living there. Slums lack sanitation, trash removal, drainage, safe drinking water, electricity, roads and other public services.

The report also said that the poor living in slums spend more than half of their budgets on food, "leaving little for all other needs, including housing, education, transportation, and health care.Unemployment rates dramatically dropped in urban areas, in tandem with increasing labor force participation rates." However, the report shows that "a large fraction of the urban poor, women, and the youth are unemployed, or working in informal jobs with no security."

Sisters have been working in Kenya for decades, and in recent years, progress has been made to improve the quality of life for families living in urban slums and other areas. 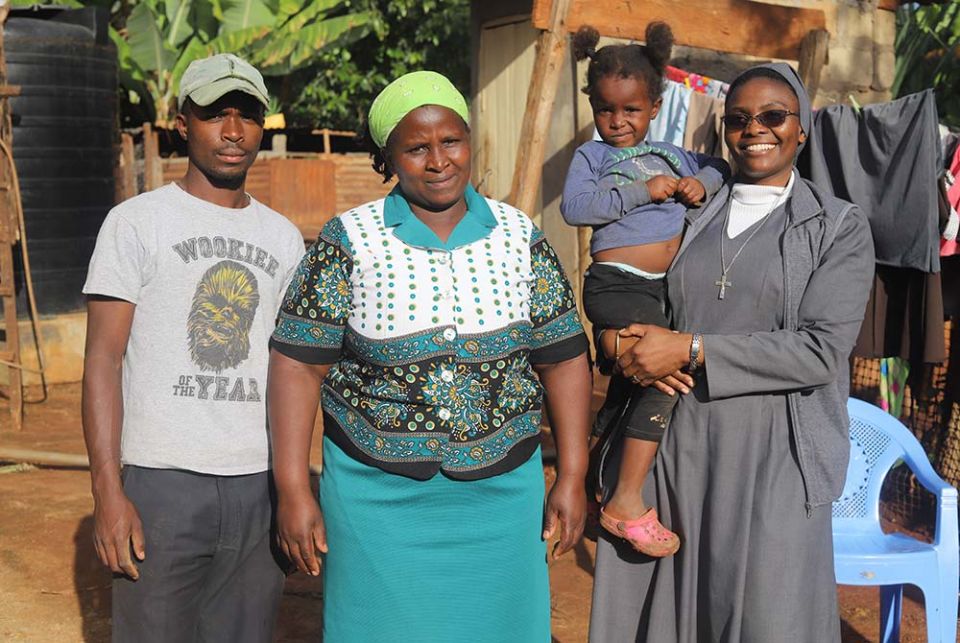 Sr. Gisele Mashauri interacts with Grace Wamboi and her children at their home in Makuyu village, located some 37 miles northeast of Nairobi. Wamboi is a member of Savings and Internal Lending Communities. (GSR photo/Doreen Ajiambo)

The sisters developed the microloan project after securing funds from Don Bosco Mission, a German charity organization that coordinates the worldwide youth aid projects run by the Salesians of Don Bosco, to help empower vulnerable families. In Dagoreti, for example, the project provides women with microloans to help them start small businesses so that they're able to pay for their children's school fees and other basic needs.

Sr. Gisele Mashauri, who oversees the project, said it focuses on microloans for women, small business development, and education of at-risk children. "Microloans enable the poor to engage in self-employment and income generating activities," she said.

"Our main goal is for families to be self-sustained and every child to go to school," she said, adding that microloans are a part of their plan because they have been proven to reduce poverty in developing countries. "We have seen very many poor people living in slums become financially independent and better able to break out of poverty." 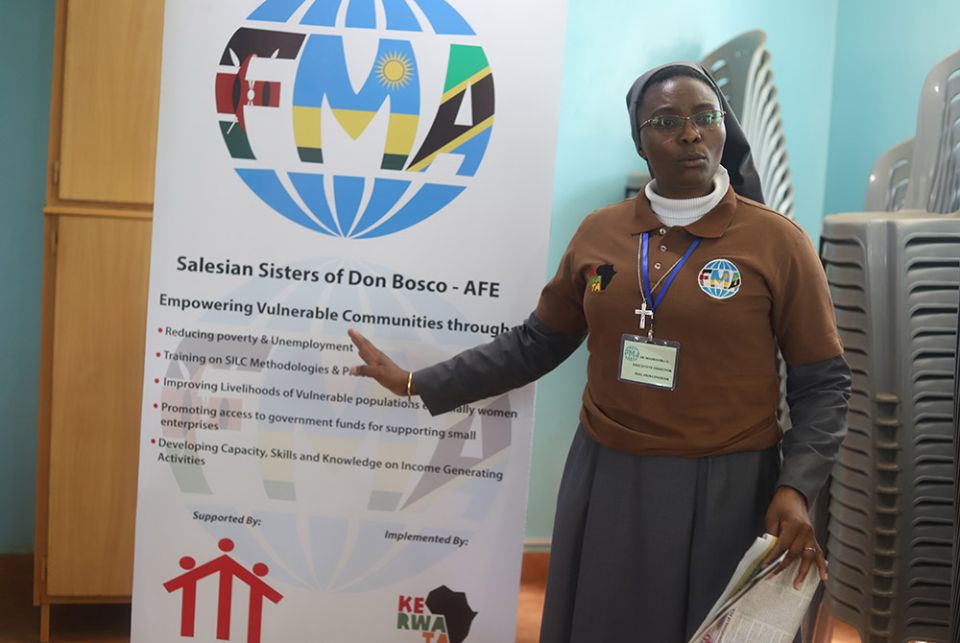 Sr. Gisele Mashauri of the Salesian Sisters of Don Bosco demonstrates to women the important mission of her congregation in empowering Kenyan women living in urban poverty on Oct. 31, 2020 in Makuyu village. (GSR photo/Doreen Ajiambo)

Sisters start by helping women living in slums to form table banking groups whose members pool their resources. Table banking is a funding method in which group members pool their savings and borrow directly from that group savings for short- or long-term loans, according to the Numerator Investments, an investment company offering financial and business consultancy. Group members meet periodically; they resolve issues and collect savings and loan repayments.

Mashauri said SILC funds the groups consisting of 15 to 25 members each, to enable them to start small businesses so that they are able to save in their respective groups. Members save at least 50 Kenyan shillings (50 cents) per day from their businesses. Members then lend this money to other members in the form of loans without collateral. These members pay the loans back with interest. Mashauri noted that loans given to members are mostly meant to pay school fees for their children and start small businesses.

Women have a special wooden box they call their bank, where they put all the money after collecting their earnings. Mashauri said that no member of the group is allowed to unlock the box on their own, adding that if any of the members wants an emergency loan for household and livelihood needs, a meeting is convened by all members who decide whether or not to grant the loan.

"Members of the group consider savings from a particular member applying for an emergency loan before the loan is approved," noted Mashauri, saying that members are governed by a strict set of rules and breaking them comes with social repercussions and possible financial penalties. 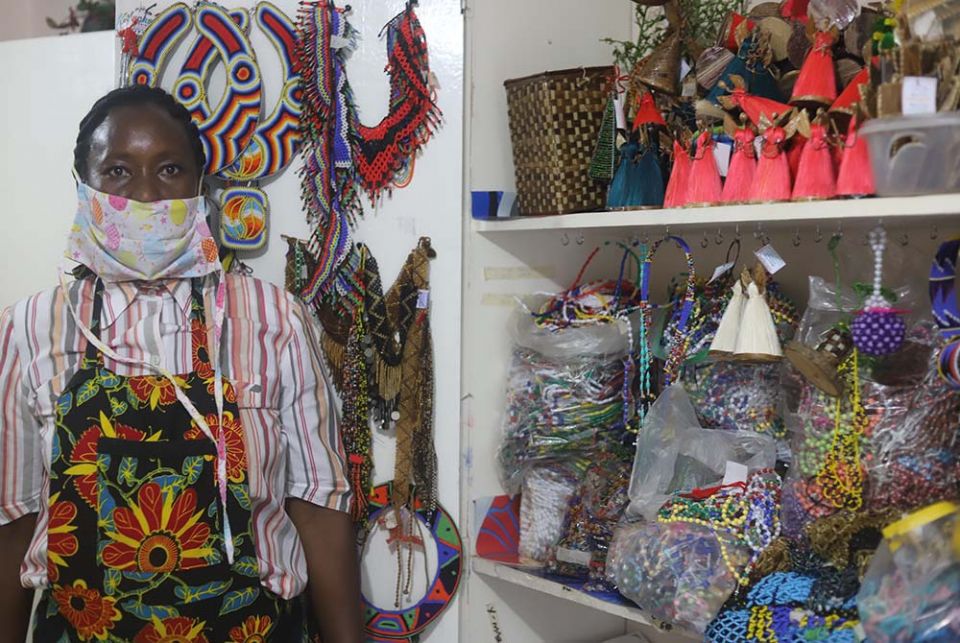 Gladys Wanjiru, 37, stands inside her jewelry shop in Dagoreti slum on the outskirts of Nairobi on Oct. 24, 2020. Wanjiru began her business after securing a loan from Savings and Internal Lending Communities. (GSR photo/Doreen Ajiambo)

In some instances, members of the group decide to workas a team to generate income that can later be used as loans among group members. They usually save money for some period of time and begin businesses such as selling groceries, making handicrafts, and farming livestock, among others. When the products are sold, this becomes the capital of the group, which makes low-interest loans to members.

"I believe in unity because it's power," said Mashauri. "When people decide to work together then they definitely grow together. From the small contributions they make weekly they're able to start businesses of their own as a group."

These women entrepreneurs, who are mostly single women and economically exploited, meet every Thursday from 2 to 4 p.m. at Dagoreti market to be trained in the hope they can scale their businesses, thus creating more jobs and growing the economy. The training usually takes the form of learning skills like bookkeeping, stock control or marketing basics.

The project started with 30 women but the numbers grew rapidly to an average of at least 70 women in a span of one year. Currently, the number of women in Dagoreti alone is 120 with nine groups; in Makuyu there are 80 women with six groups. 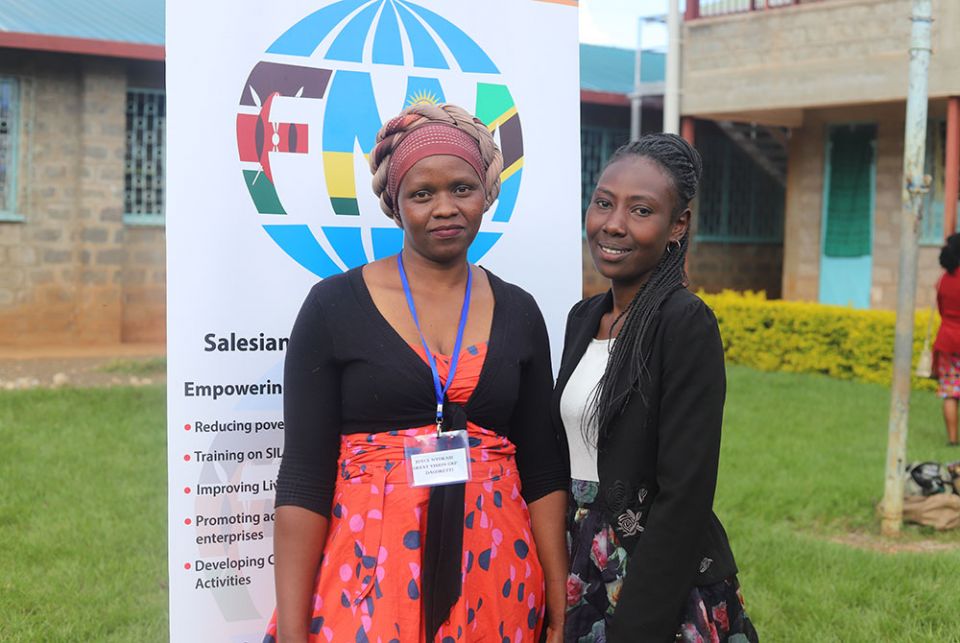 From left: Joyce Nyokabi, 34, and Damaris Wairimu, 32, interact after attending a conference on women empowerment in Makuyu village. The conference was organized by the Salesian Sisters of Don Bosco, which aims to help alleviate poverty among women and improve the well-being of their children. (GSR photo/Doreen Ajiambo)

Damaris Wairimu, who is the chairwoman of one of the groups, Baraka Saving Group, said the group changed her life and the lives of some of the women living in Dagoreti slum. After getting her first loan from the group through SILC to start selling kerosene, Wairimu secured another loan from the group and bought several kerosene pumps that enabled her sell more and employ other women.

"This project is really changing the lives of very many poor families in slums. Many women here are able to take their children to school without heavily relying on donors and borrowing money from their relatives and neighbors," said Wairimu. The project, which started in 2018, is expected to serve 300 individuals over the three-year period, scaling up from 50 people in the first year to 150 in the third year. "I wish they could help more people who are suffering with their families and who have no money to start even a small business."

Sisters have also trained women from Dagoreti and Kibera slums in income generating programs, such as sewing, knitting, doll making and craft work, so that they can start their own small industries and generate a reasonable income for themselves and their families.

In rural areas, sisters have been able to train vulnerable women, especially widows, on how to farm and keep livestock. With small parcels of land and using roadsides reserves they are adopting small-scale farming, growing maize, beans, pineapples, tomatoes and Irish potatoes. They are also doing pig farming, goat keeping, poultry, and dairy farming. 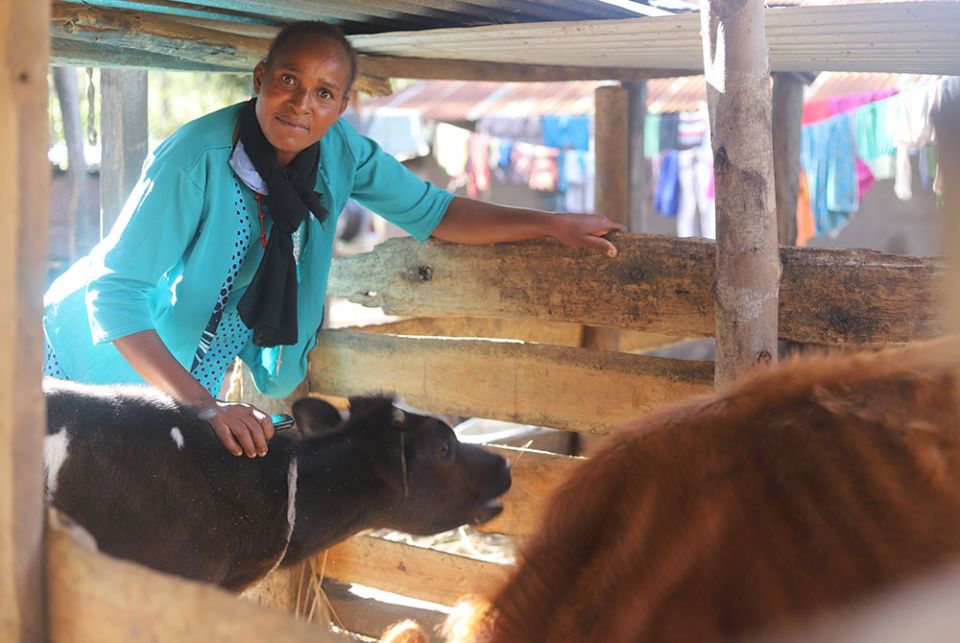 Veronica Nthambi, 45, tends to her cows at her home in Makuyu village, some 37 miles northeast of Nairobi. (GSR photo/Doreen Ajiambo)

Veronica Nthambi, a member of one of the groups from Makuyu, a rural town 37 miles northeast of Nairobi, said that her proudest moment in life came in 2019 when she bought her first pig from her savings.

"I was extremely happy when I bought my first pig. It was like a dream for me," said the mother of five. Her pig produced eight piglets in August 2019 and recently gave birth to 12 more. "I didn't know that by saving small amounts of money can lead to buying something big."

Sr. Purity Ndwiga, also a member of the Salesian Sisters of Don Bosco, said if women living in abject poverty are equipped with skills and can access funds to start income generating activities, street begging will be a thing of the past.

"I believe that we can end poverty in Kenya and other African countries if we invest in women and vulnerable people," she said. "Women in slums and rural areas are optimistic and my biggest dream is to see all of them prospering. I hope to see all of them having a house they can call their own and sustaining themselves, at the same time also helping other people in the community."

Nyokabi's dream aligns with Ndwiga's hope. She has a plan to make a wholesale grocery supplying food stuffs to other retailers.

"I believe that one day I will also own a house and drive a nice car if my business continues doing well," she said. "I'm grateful to the sisters for the wonderful opportunity they gave me."

Q & A with Sr. Angela Reed, seeking to address the root causes of human trafficking

Helping my students center in God, and go forward