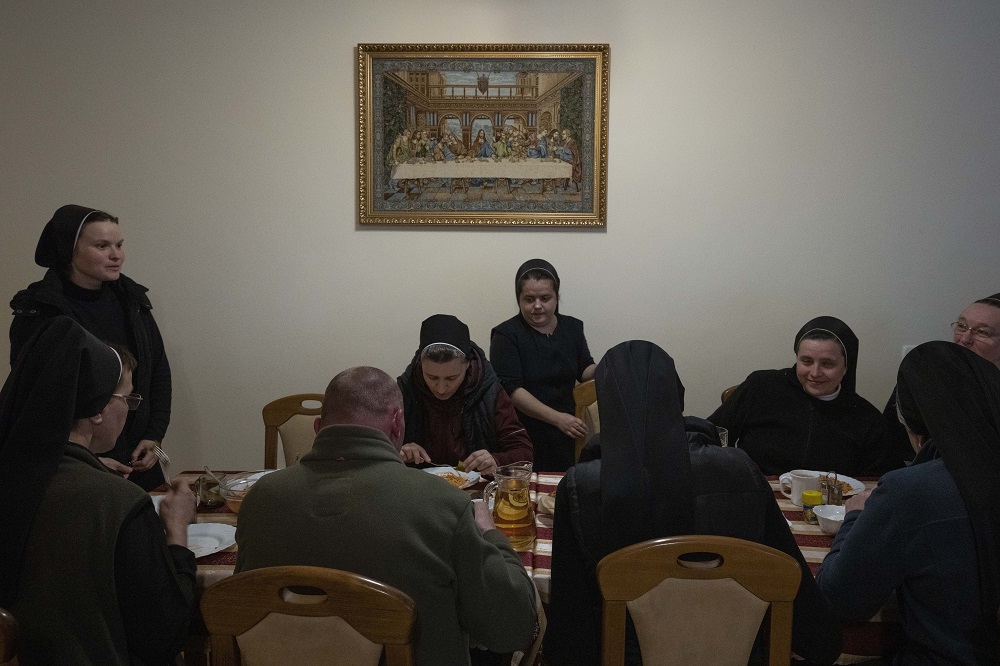 Nuns eat dinner April 6 at the Hoshiv Women Monastery, where they have been taking in internally displaced families fleeing the war in Ivano-Frankivsk region, western Ukraine. Before the war, the nuns led a tranquil life. In addition to their religious duties and charitable work, they grew mushrooms, made their own pasta and painted icons. Now, they run after young children, provide support to their mothers and cook daily for dozens of guests. (AP Photo/Nariman El-Mofty)

Beneath the ancient beech forests of the Carpathian Mountains, a quiet monastery in the western Ukrainian village of Hoshiv has transformed itself into a giant playground for a dozen children who've been displaced by the war with their families.

Nuns at the Greek Catholic Congregation of the Sisters of the Holy Family, 100 kilometers (60 miles) from Lviv, have granted refuge to some 40 people fleeing fighting with Russian forces in eastern and central Ukraine.

The sound of birdsong and the gentle drone of prayers are a relief for 59-year-old Ryma Stryzhko, who fled from Kharkiv. "It seemed that the planes were flying in the middle of the house. And you could hear the sound of bombing," she said. She often had to duck behind cars as she was going to buy bread or medicines.

"After what we saw, [the monastery] is a paradise."

The monastery is in itself a symbol of resilience, built after Ukraine's independence in the early 1990s. The previous monastery in the village had been closed by communist authorities while the area was part of the Soviet Union, and the nuns sent to Siberia.

"All our prayers are now focused on peace in Ukraine, for our soldiers, for those innocent people who died, who were murdered," said Sister Dominica, the head nun. 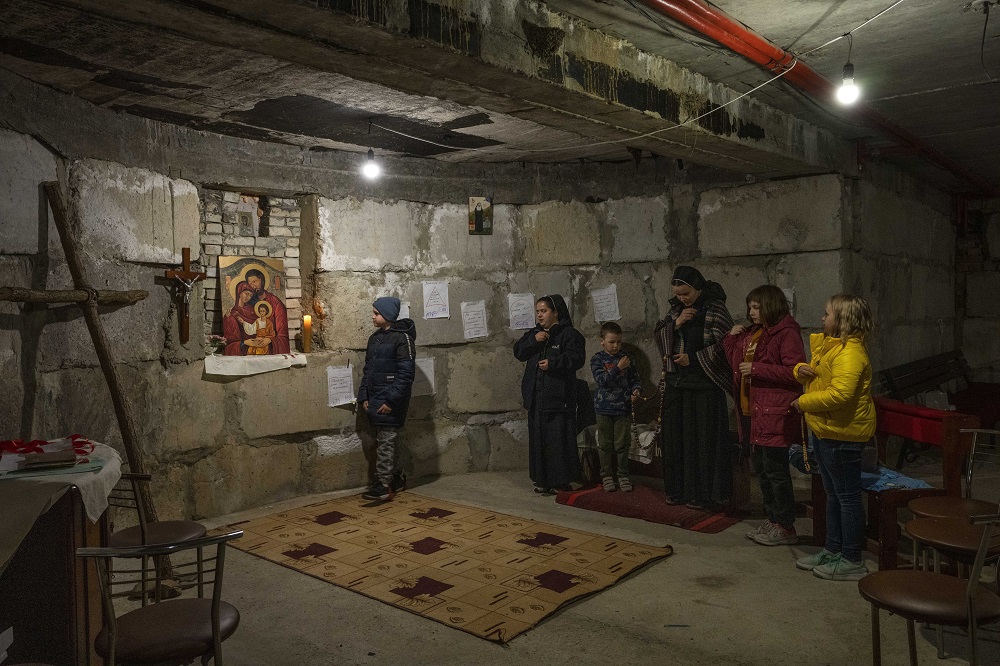 10-year-old Rostyslav Borysenko, who fled besieged Mariupol, left, and displaced children pray with nuns April 6 in a makeshift chapel in a basement the nuns have prepared to take shelter in when air raids go off at the Hoshiv Women Monastery, where nuns have been hosting people fleeing the war in Ivano-Frankivsk region, western Ukraine. (AP Photo/Nariman El-Mofty)

Before the war, the 17 nuns led a tranquil life. In addition to their religious duties and charitable work, they also grew mushrooms, made their own pasta and painted icons to decorate the chapel. Now, they run after young children, provide support and counseling to their mothers and cook daily for dozens of guests.

"Everything in the monastery is focused on prayer and order," Sister Dominica said. But when the Russian invasion began, they told local officials they could host up to 50 displaced people.

"We adjusted the prayer and work schedule to the people," she said.

Many of the children who are now laughing and hugging the nuns arrived traumatized.

"In the beginning, they were a little reticent. This is a new place for them. They came from cities where [there is shooting], where there are constant [air raid] sirens," she said.

But even among these peaceful surroundings, the nuns still get air raid alerts on their smartphones. They warn the rest of the residents by ringing the monastery bells — a less traumatic sound than the loud sirens in the cities — and direct them to the basement.

A makeshift chapel there is decorated with a painting of Mary and baby Jesus, a candle and a large cross made of branches. Mattresses, blankets and benches also line the basement. One of the walls had "The Prodigy" written in chalk, an apparent homage to the British dance-electronic band.

But even when there are no sirens, children happily use the cavernous underground space.

"We play and read prayers," said Rostyslav Borysenko, a 10-year-old, who fled besieged Mariupol with his mother. "It helps."

His mother is still anxiously awaiting news of relatives and friends who couldn't escape Mariupol, or were evacuated to eastern areas controlled by Russian-backed separatists.

Despite being thousands of kilometers from the frontlines, conversation at the dinner table mostly revolved around war.

While the families break bread in the dining room, the nuns dine separately in the library, at a long table under a painting of the Last Supper. Among them is 44-year-old Sister Josefa, who was evacuated from a Kyiv monastery on the first day of the war.

"It's hard to leave the place you lived," she said. "Although I can live here ... my heart is there. And I'm waiting to go back." 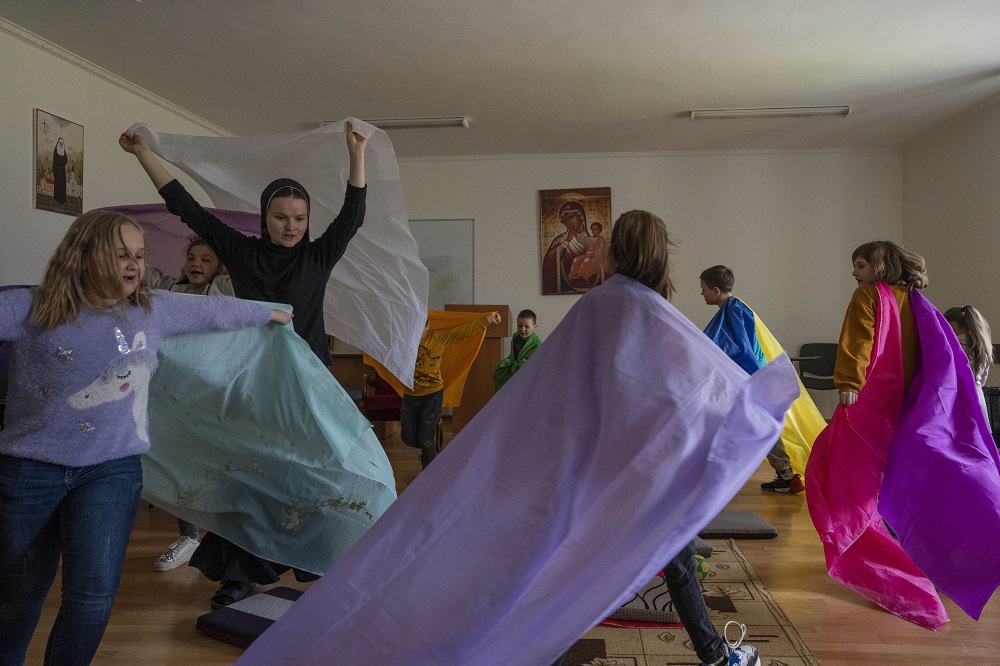 A nun plays with internally displaced children who are taking refuge at the Hoshiv Women's Monastery in Ivano-Frankivsk region, western Ukraine, on April 6. (AP Photo/Nariman El-Mofty)