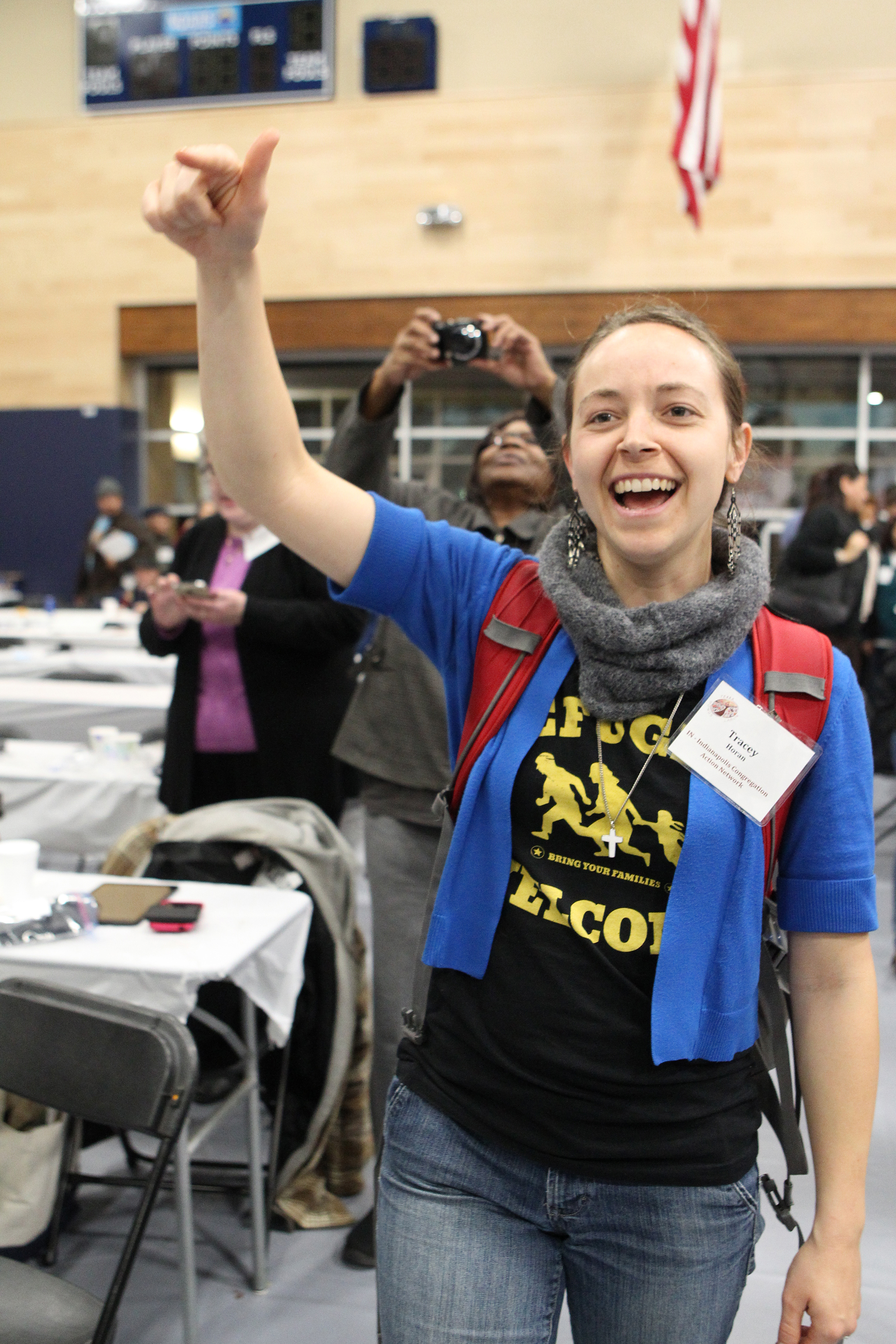 Sr. Tracey Horan is shown chanting during a plenary session at the U.S. Regional World Meeting of Popular Movements in February in Modesto, California. A Sister of Providence of St.-Mary-of-the-Woods, Ind., she will receive the Cardinal Bernardin New Leadership Award from the U.S. bishops' Catholic Campaign for Human Development June 14 in Indianapolis for her work as a community organizer. (CNS photo/Dennis Sadowski)

Washington, D.C. — Sr. Tracey Horan has learned that walking with people — accompaniment, as Pope Francis calls it — can make a difference in the world.

She recalled learning the lesson time and again during her work as a community organizer with Indianapolis Congregation Action Network, or IndyCAN, as well as during her journey toward religious life.

Horan, 29, a second-year novice with the Sisters of Providence of St. Mary of the Woods in Indiana, said she has found that the people she works with in neighborhoods and 17 congregations around Indianapolis are the inspiration that fills her with hope in world beset by injustice.

Beginning in August, she became immersed in IndyCAN's Ticket to Opportunity campaign which ultimately saw voters pass a transit expansion that promoters said will create thousands of jobs and boost access to public transportation for people of color and those living in poverty.

Her willingness to listen to people as they discover the power they hold to achieve social justice earned Horan the 2017 Cardinal Bernardin New Leadership Award from the Catholic Campaign for Human Development, the U.S. bishops' domestic anti-poverty and social justice program.

The award will be presented June 14 at a reception during the spring assembly of the U.S. Conference of Catholic Bishops in Indianapolis.

Horan said she was surprised to win the award because of the short time she has been with IndyCAN. "It's affirming," she told Catholic News Service.

But in nominating her colleague, Shoshanna Spector, IndyCAN executive director, said Horan has "worked alongside immigrants, returning citizens and people in poverty to live out the church teaching to building bridges across differences, raising the prophetic voice and awakening the voice of a marginalized electorate that is transforming Indianapolis."

The novice said victories in her work — really her ministry as a young woman religious — can be agonizingly sluggish. But they do come, and she said she has learned to be patient with "the slow work of God."

Each day is different in the organizing world, but Horan has found that the common bond is the people. From sitting in a Latino leader's kitchen to discuss his experience with racism to reviewing an urgent petition with faith leaders after Mass or a prayer vigil with a family facing the possibility of deportation, Horan has learned that the greatest treasure she has experienced is accompanying people through their struggles. 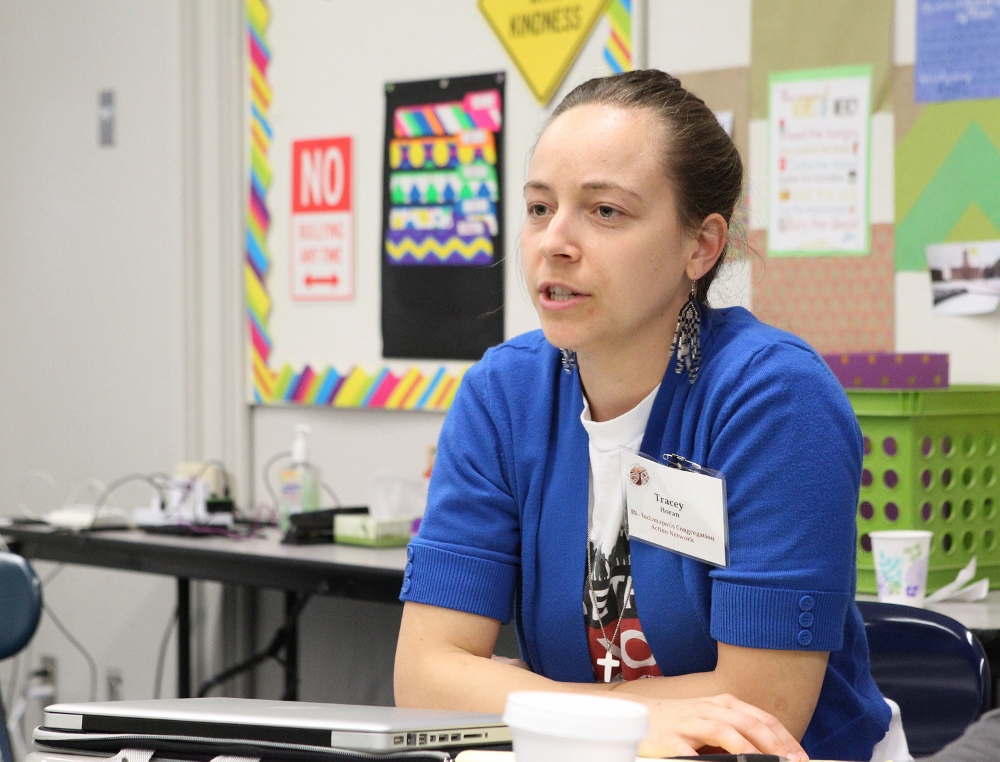 "Always it means connecting the stories of our people with systemic injustice and our call to make manifest an alternate reality: an economy of inclusion, a framework of abundance, the reign of God," she wrote in response to an email from CCHD staff. "Always it means asking questions about why things are the way they are, dreaming together about how they could be and asking, 'What will it take to get there? How can we build this vision together?'"

Horan admitted that her understanding of Catholic social teaching took time to grow in her life. She credited her high school Spanish teacher, Senorita Trick, for helping change her understanding of the world through an assignment to develop an argument opposing a fence along the U.S.-Mexico border. At that point Horan had been a vocal supporter of the fence to keep out people she considered "lawbreakers."

While researching the issue, Horan said, she learned about the lives of people who migrate, the root causes of migration and the way the U.S. contributes to those causes, learning about her misconceptions along the way.

After college Horan worked in El Paso, Texas, at a clinic for children with special needs. She taught mothers to administer therapies for their children so that families could become self-sufficient. There, she began to think about how important it was to empower people and she became a stronger advocate for immigrants. Her experiences with people on the margins also helped Horan discover her religious vocation.

In Indianapolis, Horan is involved in the Indianapolis Archdiocese's Justice for Immigrants Campaign and maintains a connection with the House of the Little Flower Catholic Worker community to help her stay grounded in the margins of society.

Organizing work is long and hard, she said, but worthwhile. "I believe in transformation and walking with people, she said.

"It took me a long time and a lot of influences to understand how central Catholic social teaching is to who we are as Catholics. So anything we can do to raise awareness of that is a contribution to the legacy of the church."

The nun and the actress behind 'Orange is the New Black'

Catholic schools, March for Our Lives