An encounter with Jesus changes people's lives, and that should be especially noticeable in those who are consecrated completely to serving God, the church and others, Pope Francis said.

"One who has this encounter becomes a witness and makes the encounter possible for others, too," he said Feb. 2, the feast of the Presentation of the Lord.

Overlapping by two months, the Catholic Church's special Year of Consecrated Life has led to the Jubilee Year of Mercy, emphasizing God's love and mercy for each individual and the mission to share that experience with the world, the pope told thousands of consecrated men and women who joined him in St. Peter's Basilica and hundreds of others who watched on screens outside once the basilica was full.

The Mass in St. Peter's Basilica began with the traditional blessing of candles and a prayer that God would guide his people toward his son, "the light that has no end."

The feast day commemorates the 40th day after Jesus' birth when, in accordance with ancient Jewish practice, Mary and Joseph took him to the temple and presented him to the Lord. The feast's Gospel reading from St. Luke recounts how the aged Simeon and Anna were praying in the temple at the time and recognized Jesus as the Messiah.

The event, the pope said, is a "feast of encounter," not just the meeting of Jesus with Simeon and Anna, but the encounter of people's hopes and expectations for a savior with the fulfillment of those hopes in Jesus.

Christ's birth is the ultimate encounter, he said; God's decision to have his son born into the world, to live and suffer and die for the salvation of humanity, shows that he did not want to "remain outside of our drama, but wanted to share our lives."

In the same way, whether living in a cloistered convent or traveling the world as a missionary, Pope Francis said, "consecrated men and women are called to be a concrete and prophetic sign of this closeness of God and of sharing with the fragile, sinful and wounded condition of people today."

Pope Francis, a Jesuit, spoke as one of the consecrated people, telling the congregation that as Christians and as religious "we are guardians of awe."

The experience of an encounter with Jesus constantly must be renewed, he said. One's spiritual life must never be simply routine, the mission and charisms of an order must never be "crystallized into abstract doctrine" and the spiritual insights of the order's founder "are not to be sealed in a bottle. They aren't museum pieces."

"Our founders were moved by the Spirit and weren't afraid to get their hands dirty" as they ministered in Jesus' name to real people living real lives, the pope said. "They didn't stop in the face of obstacles or when others misunderstood them because they preserved in their hearts the awe of having encountered Christ."

"They did not domesticate the grace of the Gospel," he said, but lived with an "all-consuming desire to share it with others."

"We, too, are called today to make prophetic and courageous choices," the pope said. In that way, "others will be attracted to the light and can encounter the father's mercy." 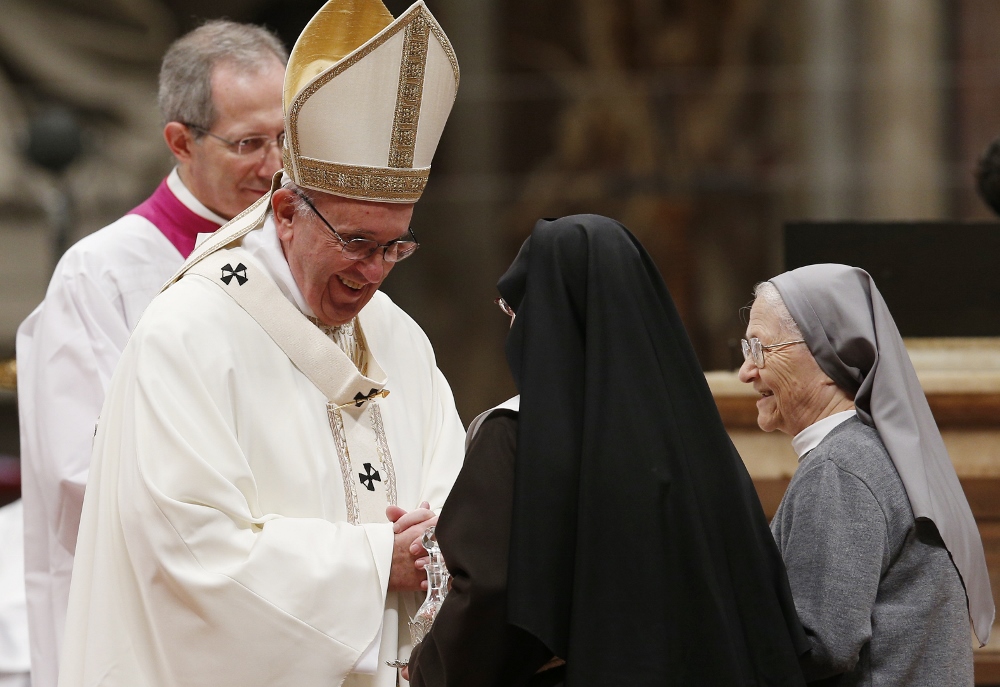