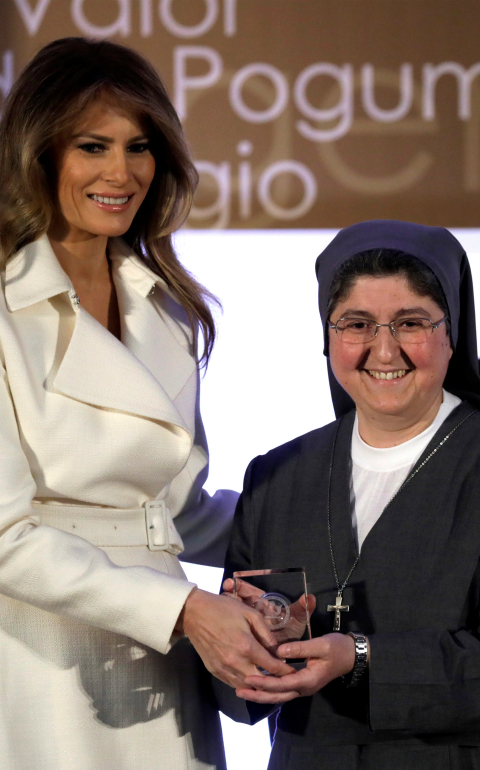 First lady Melania Trump presents Sister Carolin Tahhan Fachakh of Syria with the 2017 Secretary of State's International Women of Courage Award during a March 29 award ceremony at the State Department in Washington. Sister Tahhan Fachakh is a member of the Daughters of Mary Help of Christians. (CNS photo/Kevin Lamarque, Reuters)

Rome, Italy — Two weeks after the U.S. State Department honored her as a Woman of Courage, a Salesian sister from Syria told reporters President Donald Trump's decision to bomb a Syrian air base is another step back from peace.

"Everything ends," she told reporters in Rome April 11. The war will end, too, she added.

"Every time we say there is hope for peace and let's move forward, something happens to set us back. The situation is ugly now," Carolin said, referring to Trump's decision to bomb government military installations.

The Syrian nun, who stopped in Rome on her way back to Syria from the United States, said she truly doubts that Syrian President Bashar Assad launched a chemical weapon attack in early April. The attack is why Trump said he decided to bomb Shayrat Air Base, the alleged source of the attack.

Carolin said Assad and his wife have supported and protected the Salesians and other Christians in the country. "I like my president," she said.

The ongoing fighting means Syrian children are being raised in a "culture of war," she said. One of her 4-year-old students taught her how to recognize the difference between a cannon shot, which simply thuds when it lands, and a missile, which makes a whistling sound before impact.

"When our children are like this, what will we will do for our future?" she asked journalists during a meeting at the U.S. Embassy to the Holy See. The embassy nominated Carolin for the prize while President Barack Obama was still in office; the award winners were confirmed by Trump's secretary of state, Rex Tillerson.

The country's children "are all damaged by the war, they are afraid," but the Muslim and Christian children in her school often are more than just afraid. Many of them, she said, no longer speak.

"In our school, we offer them a climate of serenity and peace, where every child who is in need can play in the big courtyard and study," she said.

Although she works in Damascus, Carolin is from Aleppo. She hasn't been to her hometown since 2010 because she wants to remember it as it was. But a friend went to visit her family, and they made a little video for Carolin. In it, she said, her nephew says, "Aunt, look what we gathered," and shows the camera a box of spent shells of different sizes.

Carolin said peaceful coexistence, friendship and mutual help continue to mark the relations between the vast majority of Muslims and Christians in the country. The problem is terrorism, not Islam, she said.

The Salesians run a school to train women in sewing and tailoring. "Since 2010 more than 500 women have entered our home and frequented the sewing course," she said. "The majority are Muslims. If I said we would only choose Christians, then I would become a fanatic."

"When a missile falls or there's an explosion," she said, "many Muslims knock on our door and ask, 'Sister, are you OK? Do you need anything?'"

A ministry at the top of the world

Sisters bring inclusive education to children with and without disabilities