Read more stories that delve into questions of peace in the Making Peace series at NCRonline.org/feature-series/making-peace. 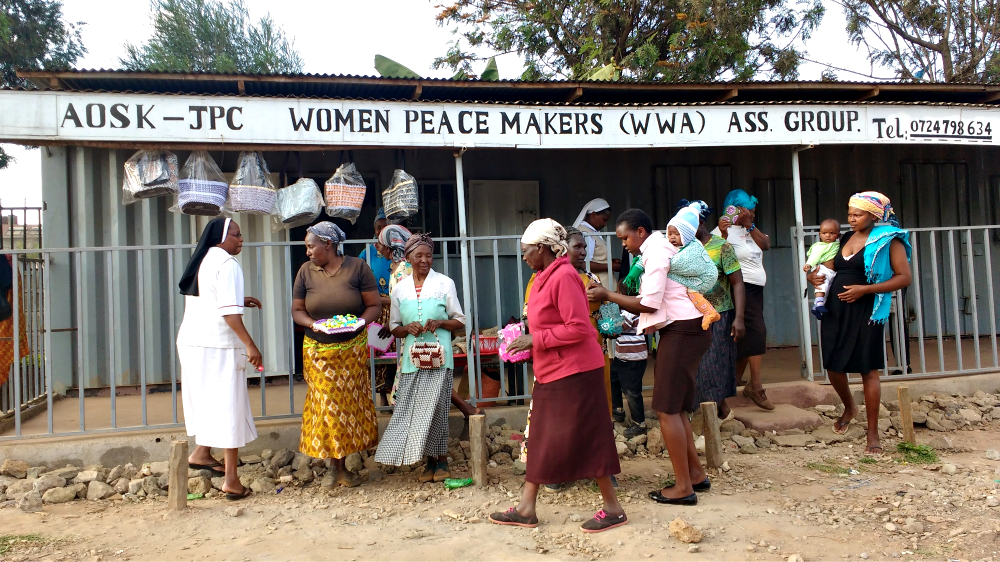 Now that the women peacemakers group has a storefront, fashioned from a container, they are able to hold regular meetings and have even started an informal lending, or “table banking” group. (GSR photo / Melanie Lidman)

Nairobi, Kenya — Two years ago, the women of the Ngando women's peacemaking group, an empowerment project in a slum of Nairobi, used to sit on a blanket and make their beaded handicrafts under the shade of a tree in the church courtyard. But with the arrival of a new store in a converted container, proudly advertising their wares along the busy Ngong Road, the group has blossomed. The peacemaking circle has doubled in size and implemented a thriving "table banking" system, providing temporary loans to up to five women per week.

There's one difference: You may not see them dancing for the customers.

Previously, customers who purchased an array of beaded work from the women were met with exclamations of joy, ululations and traditional dancing. The women were thrilled beyond belief that their items were selling.

But now they have a brisk business from their new store with an inviting, shaded balcony on a busy thoroughfare. They find themselves hosting more visitors interested in the peacemaking program, and selling many more handmade goods, in addition to grains and vegetables for their neighbors. While the women are appreciative of their customers, the transactions no longer provoke the same reaction because they are much more commonplace.

Global Sisters Report first visited the Women's Peacemaking project in Ngando in January 2015. The Ngando project is one of the local chapters of a countrywide initiative in which the Association of Sisterhoods of Kenya's Justice and Peace Commission has trained more than 500 women, who completed a summer-long conflict resolution and economic empowerment training. 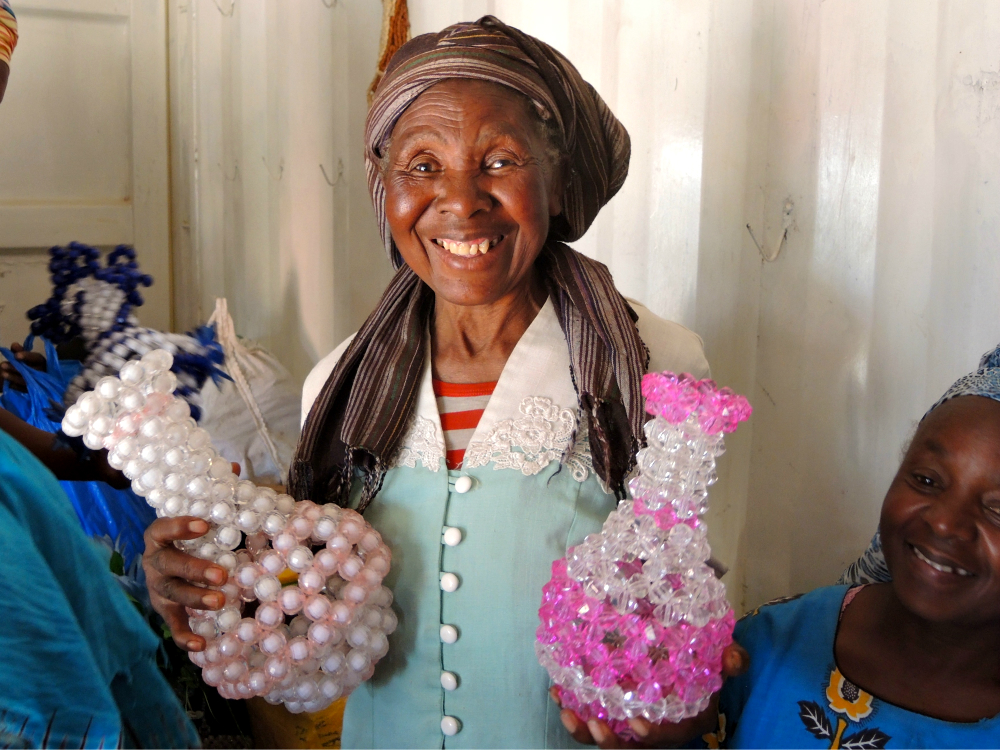 The women are proud of their work, but don’t dance for joy with every customer as selling has become much more commonplace. (GSR photo / Melanie Lidman)

The trainees are mostly laywomen, but include a few sisters. They hail from across the country and gain tools for defusing small local conflicts, like disputes over fences or resources.

After the training, these women return to their communities across all 25 dioceses of Kenya and share their knowledge by creating "peacemaking circles," groups of women from their neighborhood whom they train to act as local mediators. In this way, the conflict resolution training trickles out to the most local level.

In 2014, Solphine Othuol, an HIV counselor from the Kibera who completed the peacemaking training, started the women's group in Ngando, since she used to work at a clinic in the neighborhood. Once a week, she laid a blanket under a tree in the courtyard of St. Vincent Pallotti Church, and up to 30 women would gather for seminars on conflict resolution, empowerment and health. They also learned beading techniques to make small crafts to sell at local markets.

"There is a lot of conflict here, like tribal clashes or petty issues with neighbors any time people live so close together," Othuol explained in January 2015.

Ngando is a neighborhood in Kibera, Nairobi's largest slum and the second-largest on the continent after South Africa's Soweto. More than a million people live in Kibera's sprawling network of mud alleys filled with trash, crowding into corrugated tin houses crammed into every inch of space. 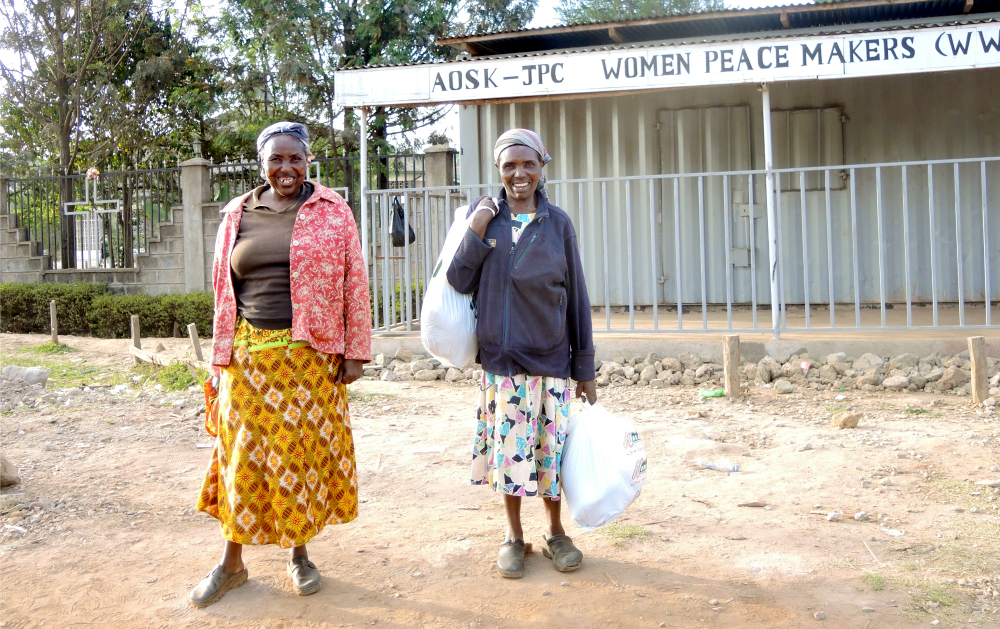 Refugees from the 2008 post-election violence make up the majority of the Ngando neighborhood. After accusations of fraud sparked conflicts along tribal lines, more than 1,000 people died in the violence, and 660,000 more were displaced from their homes, according to Amnesty International. After their homes and fields were destroyed, many fled to Nairobi, and landed in Kibera.

Ngando became a blend of internal refugees from many different ethnic groups, crowded together in hastily built shacks. As in any impoverished urban slum, conflicts are inevitable. Many of the refugees were farmers, and when they moved to the city, they lost the only livelihood they knew. Many are also HIV-positive. Residents came from different tribes, arriving as a result of trauma and loss, which exacerbated the situation.

This year, two sisters from the Justice and Peace Commission who facilitate the peacemaking program located a shipping container from a donor, and organized with St. Vincent Pallotti and the city council to set up the roadside store just in front of the church.

The city council has waived taxes and fees for setting up the store, except for a low annual tax. The church donated electricity and a cement floor for the porch. St Vincent will use half of the container for a religious bookstore, and the priest told the sisters he will pay the women rent, though the bookstore has yet to open.

The process of creating a permanent space where the women can meet and sell their goods has completely transformed the group.

"We are so much happier because we get a place to call ours," said Sr. Josephine Muthoni Kwenga, a Sister of St. Joseph of Tarbes, who facilitates a number of peacemaking groups in the greater Nairobi area. "We can meet, we can store things, we can work. We used to be outside in the rain. Now we can meet as a group even when it's raining." 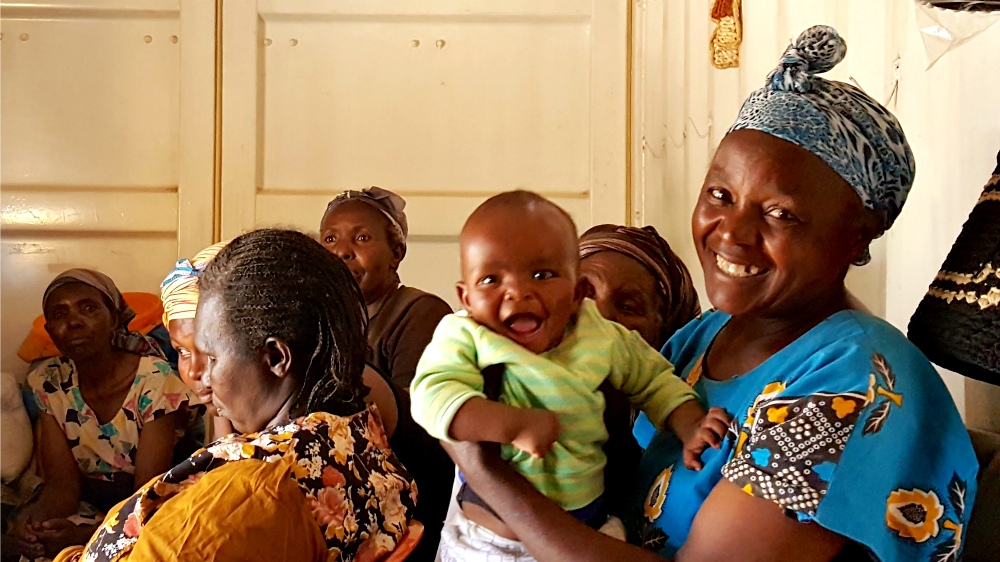 Many of the women say their families have noticed a difference after they started the program. Women also engage in conflict resolution in their communities, helping solve small arguments that arise in crowded conditions. (GSR photo / Gail DeGeorge)

Their public spot has also raised the profile of the women's group. A local charity called the Navigators-Kenya passed by the shop over the summer, saw the items women were selling, and asked the sisters if the charity could run its two-month women's entrepreneurship course for the peacemakers called EPTF, or Economic Projects Transformational Facility. That would have never happened had they still been in the church courtyard under the tree, said Kwenga.

As the group has grown, so have the women. "Through interactions with one another when we come to meet, you can get out of yourself," said Jan Wangari Donu, a 55-year-old Ngando resident who was part of the original class of Ngando peacemakers. "When you stay alone, you are only looking at your own difficulties and you sink into yourself. When we meet together, you begin to learn from what others are sharing. We have a partner who trained us to know ourselves and our potential. We are discovering other ways of uplifting ourselves."

The transformation is most evident in the way the women carry themselves: more confident, more willing to speak up and share their experiences, even in English, which few had the confidence to speak before. Some of that is due to the table banking, an informal loan program that enables the women to pool their small resources in order to help each other get small loans. This allows them to build up their own small businesses, such as selling items at the market, and the women are more economically stable than they were two years ago.

"I learned how to start a business, how to buy and sell so that you're able to know your sales and profits," said Esther Wanjiro, 49. "Now I can separate income and expenditure without mixing it up. We learned how to market our products, how to attract customers, how to speak nicely. We learned about cleanliness, how to keep our business clean. So if people are coming to buy from you and you mix up all your goods next to a pile of garbage, people won't buy it." 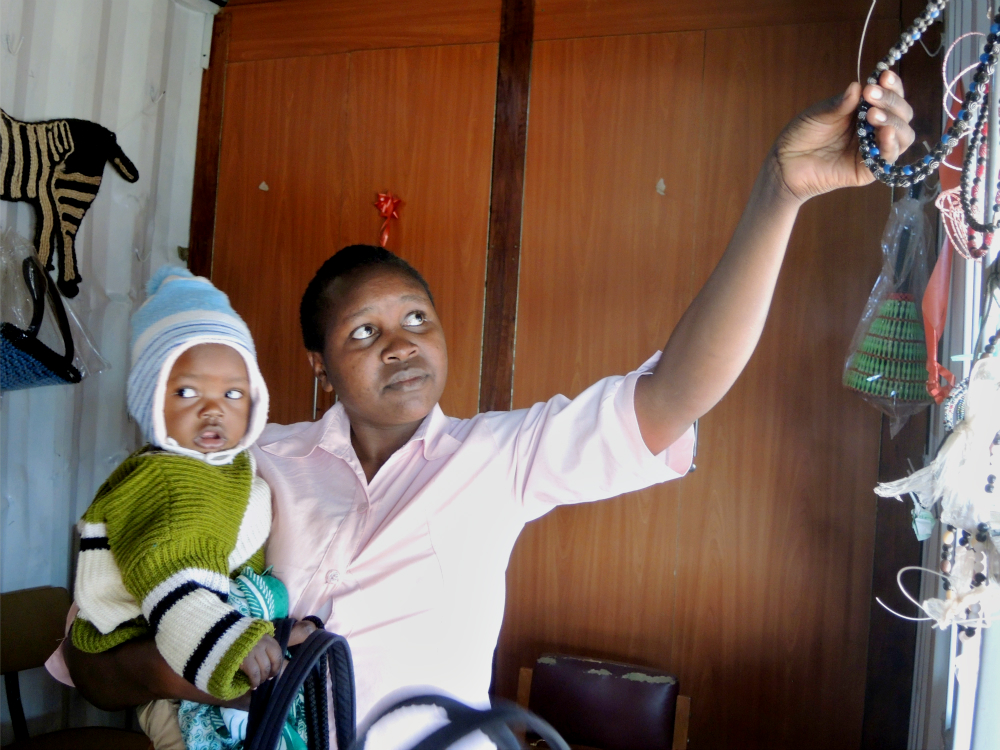 One of the challenges has been getting enough money together to employ one of the women to stay at the store full time and sell things. (GSR photo / Melanie Lidman)

Wanjiro is one of the newer members, and said the group has also changed her family. "Now we are able to deal with things that used to cause a fight in our families, and the families have noticed a difference."

Kwenga said, "Now sometimes the family will say, if they see one of the women getting angry, 'Isn't it time for you to go to the meeting of the women?' "

One of their most popular techniques for conflict resolution that they teach is still the "sip of water" tactic, she said. "We teach them to take a sip of water and hold it in your mouth," said Kwenga. "It means you can't talk. That gives you a pause to think how to react." 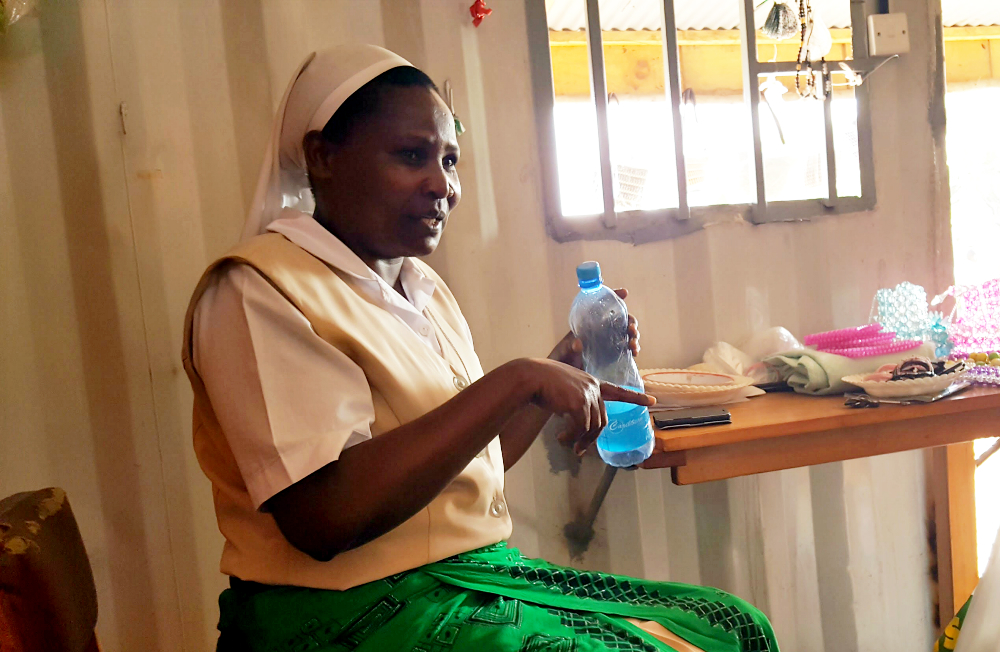 Sr. Josephine Muthoni Kwenga, a Sister of St. Joseph of Tarbes, facilitates a number of the peacemaking groups in greater Nairobi. She demonstrates the "sip of water" tactic for conflict resolution -- holding a sip of water in your mouth allows time to pause and think how to react. (GSR photo / Gail DeGeorge)

The next class of peacemakers in Ngando will start soon with the six-month peacemaking training, before they move on to beadwork workshops. Approximately 30 women will take part in the next course.

There are still a number of challenges to overcome. Though the beadwork is selling better than before, the women still struggle to sell their items, as they lament that they "haven't tapped into the right market." Because the items don't sell, the group doesn't have enough money to buy more materials to make more things, explained Wanjiro. So although the women want to keep working, they cannot take the materials home to expand their output.

The women have expanded into items like vegetables and grains, which should increase their sales among local residents.

Although they may not have enough materials, some women are still taking the lessons to heart. "I advise women that there's always work to do with your hands," said Jan Kiambi, 36. "Don't sit and home and think 'I'm unemployed and helpless.' There's a lot you can do for yourself." 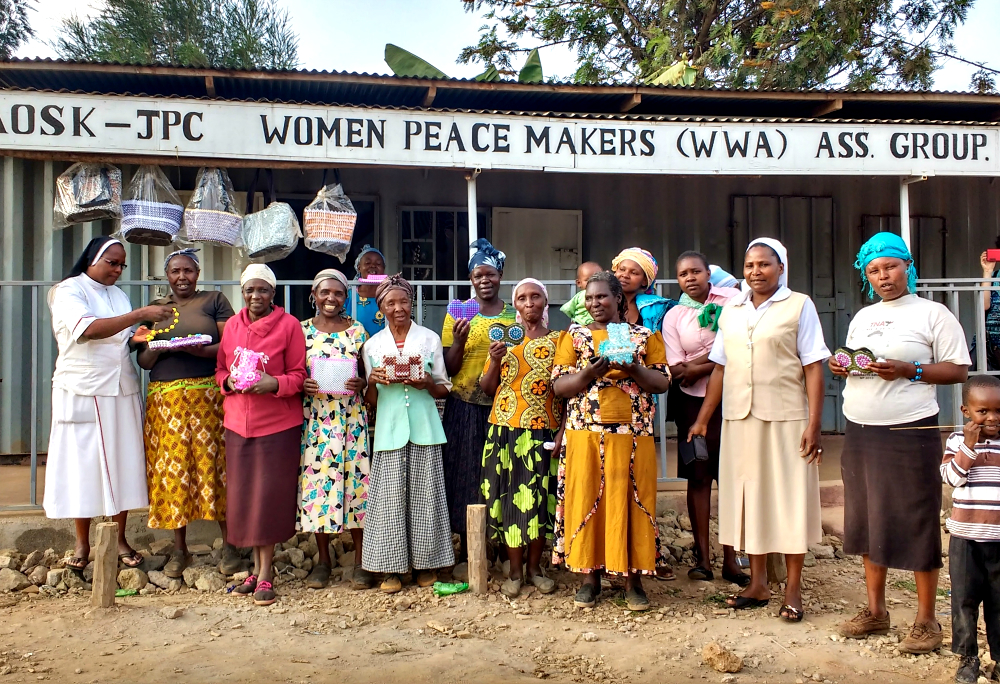 "I sell firewood, and before I came to the group and learned peacebuilding, if someone stopped ordering from me I would get so angry and stop talking to them," said Donu.

"Today, I won't get angry at them. I will still love them as a person and talk to them. He's not the one losing — when I get angry, I lose," she said. "The way I have approached such challenges has changed me. Before I joined the group, I was alone. When you're managing your life alone, it's full of suffering, you never think anyone can love you. But now I have gained confidence and peace in how we are."

From a Memphis monastery to war-torn Guatemala

After 30 years, Good Samaritan life in Kiribati continues to blossom