by David Gibson, Religion News Service
This article appears in the Nuns on the Bus feature series. View the full series. 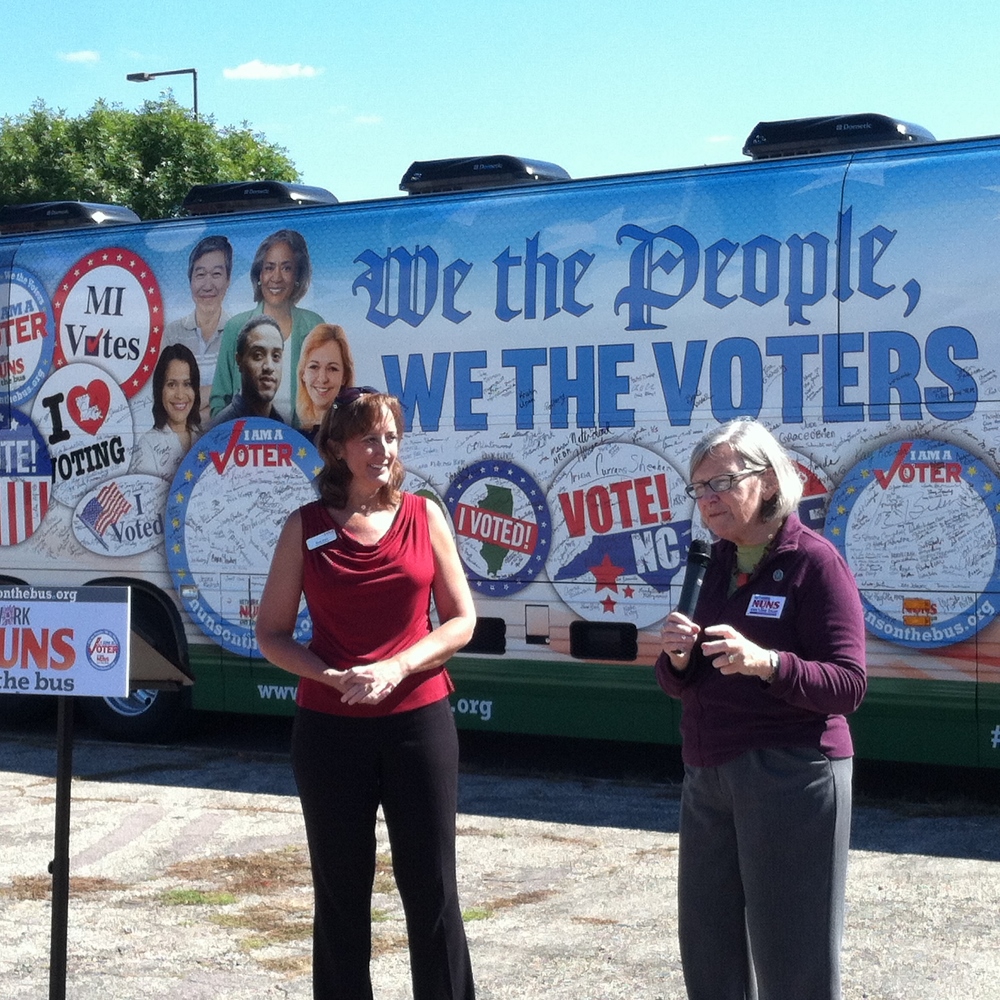 Social Service Sr. Simone Campbell, executive director of NETWORK, right, talks to people about the importance of voting during rally in Mankato, Minn., last September during the 2014 Nuns on the Bus tour. (Courtesy of NETWORK)

Pope Francis is set to arrive in Washington on Sept. 22 by plane.

The nuns are coming on a bus.

But Sr. Simone Campbell, once again the driving force behind the newest iteration of the “Nuns on the Bus” phenomenon, thinks whatever their modes of travel, both the pope and the Catholic sisters are united in their core themes: a faith-based promotion of economic justice and political consensus for the common good.

“Pope Francis talks about an economy of inclusion,” said Campbell, executive director of NETWORK, a Capitol Hill-based Catholic social justice lobby that organized the first Nuns on the Bus tour during the 2012 presidential campaign.

“What he says is that politics needs to control economics, economics should not control politics,” she continued. “We realize that he’s definitely right, but our problem in the U.S. is that our politics are purposefully polarized, so that politics are powerless to affect the economy.

Hence the goal of the fourth Nuns on the Bus tour: to “bridge the divide,” as the latest slogan says, and “transform politics.”

Over the course of two weeks, starting on Sept. 10 in St. Louis, Campbell and nearly a dozen nuns will travel some 2,000 miles through seven states — Missouri, Kansas, Arkansas, Tennessee, Indiana, Ohio, West Virginia — that are marked by sharp political divides.

“The route is not to our base,” she said, contrasting this trip with previous ones that often stopped in cities and towns with communities receptive to the Catholic social justice message. “We’re going to places where there are differences of opinion, to nourish conversations about the serious work of governance.”

In town hall meetings and at shelters and food pantries, at houses of worship and in meetings with legislators, the sisters plan to listen to the problems and challenges of Americans on the economic margins. And, Campbell said, they will collect video clips of their stories that she will try to get to the pope ahead of his visit. Campbell said she wants Francis to be able to hear from “folks that he wouldn’t otherwise be able to see, or hear from.”

The bus will wind up in the nation’s capital just as the pontiff arrives for his highly anticipated six-day visit, his first to the U.S.

On Sept. 23, the day after his arrival from a three-day visit to Cuba, Francis is to meet President Obama at the White House.

The following day, Francis will address a joint meeting of Congress — a first for a pope — before heading to New York and then wrapping up his trip in Philadelphia on Sept. 27. There, he will celebrate an outdoor Mass that is expected to draw upwards of a million people.

Campbell said she hoped to put the bus, a large charter wrapped with a distinctive logo and bright colors, somewhere that the pope could at least see it.

Still, that Campbell and the nuns find themselves in sync with the pope is a remarkable change of fortune.

In early 2012, the Vatican, then headed by Pope Benedict XVI, announced that its doctrinal office was launching an investigation and overhaul of the main leadership organization of the nation’s 50,000 nuns. The Vatican charged the nuns with straying from orthodoxy and promoting “certain radical feminist themes incompatible with the Catholic faith.”

The Vatican also said the sisters of the Leadership Conference of Women Religious, or LCWR, spent too much time on social justice causes — Campbell’s advocacy for health care reform, a long-standing priority for the Catholic Church in the U.S., was apparently especially troubling — and not enough time propounding church teachings on abortion and sexual morality.

Rather than retreating in the face of the Vatican probe, the LCWR pushed back against the accusations, and buoyed by an outpouring of support from ordinary Catholics, Campbell and Network launched the first Nuns on the Bus in the summer of 2012 to focus on victims of the nation’s economic slowdown.

It was a media sensation and was followed by two others, in 2013 and 2014, which highlighted the need for immigration reform and the problem of money in politics.

Less than a year after that first tour, Benedict resigned, and Francis was elected pope. The first Latin American pontiff, Francis is deeply committed to advancing the church’s social justice doctrine, and he also moved to wind down the Vatican investigation of the LCWR, which formally ended last April with an olive branch to the sisters.

“Obviously, Pope Francis’ message is exactly what we’ve been doing for 43 years,” Campbell said. “Having that affirmation is hugely supportive.”

But, she added, “what’s important is that we continue to do the mission regardless of how it goes,” and whatever the hierarchy says.

RNS editor’s note: David Gibson assisted Sr. Simone Campbell in writing her memoir, A Nun on the Bus: How All of Us Can Create Hope, Change, and Community.