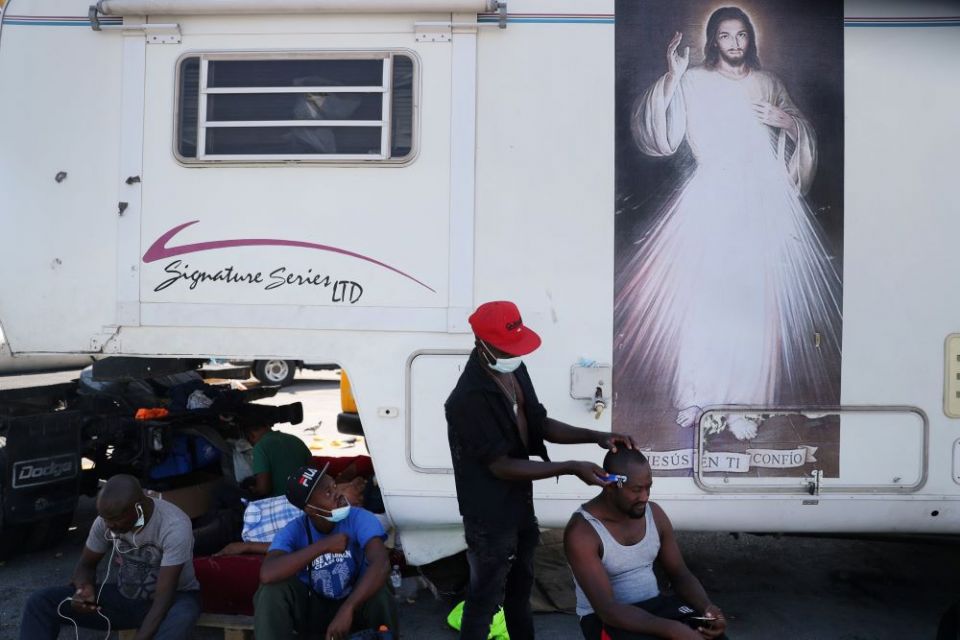 Haitian migrants trying to reach the United States watch another Haitian get a haircut outside a shelter after arriving in Monterrey, Mexico, on Sept. 24. Catholic organizations called on U.S. President Joe Biden to stop using the coronavirus pandemic as an excuse to expel asylum-seekers at the U.S.-Mexico border. (CNS/Reuters/Edgard Garrido)

The Vatican's World Day of Migrants and Refugees was Sept. 26, and 164 Catholic organizations observed the event by calling on U.S. President Joe Biden in an open letter to stop using the coronavirus pandemic as an excuse to expel asylum-seekers at the U.S.-Mexico border.

Title 42 is a provision in U.S. federal public health law that gives the government the right to stop immigration during certain public health emergencies. The Trump administration invoked the clause first to essentially close the U.S.-Mexico border for months at a time after the start of the pandemic and then to expel migrants already in the country.

But advocates argue that while Title 42 may give the power to prevent entry to the United States, it does not authorize expelling people already here. While the Biden administration has pledged to implement a more humane immigration policy, it has not only continued using Title 42 to expel people, ABC News reports, but immediately appealed when a federal court ordered a halt to the practice.

Not only does Title 42 not authorize expulsions, advocates say, but those expulsions violate federal asylum law, which gives the right to apply for asylum to anyone in the United States or at the border.

"The Administration's continued misuse of Title 42 to deny asylum seekers their right to seek asylum completely contradicts his stated mission to restore the soul of America," Anna Gallagher, executive director of Catholic Legal Immigration Network Inc. (CLINIC), said in a written statement announcing the open letter, which was spearheaded by CLINIC and Network, a Catholic social justice lobby. "Politicizing human life will never be the solution to a just and humane immigration system or society."

Mary Novak, executive director of Network, said Catholics are called to uphold the dignity of each person.

"The Biden administration's continued misuse of Title 42 is not only a violation of international human rights laws, but also a violation of the human dignity of immigrants and asylum seekers," Novak said in the statement. "We cannot allow the continuation of this xenophobic order, which puts asylum seekers in harm's way."

Signatories to the letter included the Maryknoll Office for Global Concerns, the National Black Sisters' Conference, the U.S. Federation of the Sisters of St. Joseph and dozens of individual congregations. 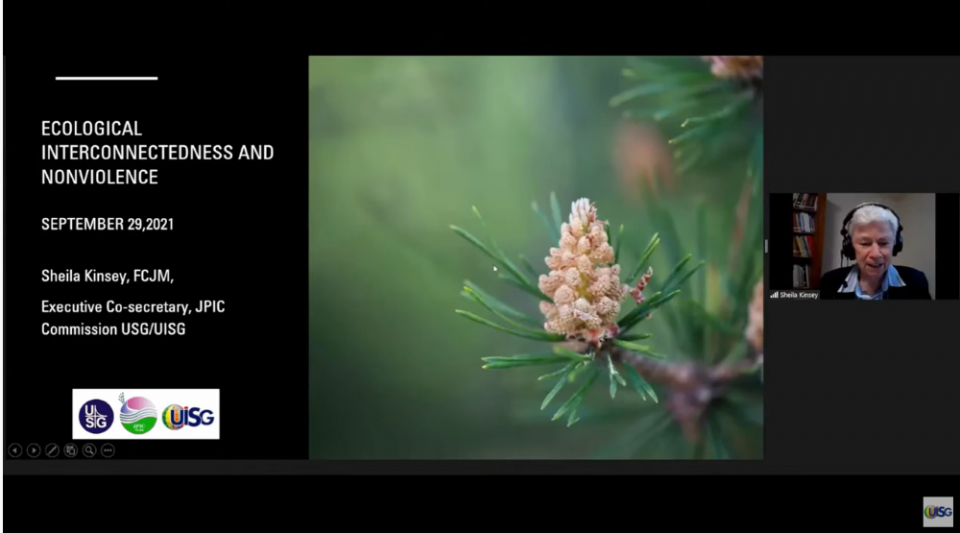 Sr. Sheila Kinsey, an American member of the Franciscan Sisters, Daughters of the Sacred Hearts of Jesus and Mary who leads UISG's Sowing Hope for the Planet campaign, speaks at the Sept. 29 webinar hosted by the International Union of Superiors General with the theme: "Nurturing Peace: Social Friendship and Dialogue." (GSR screenshot)

Sisters advocating for peace and dialogue in the spirit of Pope Francis' 2020 encyclical, Fratelli Tutti, concluded a yearlong series of webinars with calls for renewed efforts to find common ground on pressing social and spiritual concerns.

The Sept. 29 event, "Nurturing Peace: Social Friendship and Dialogue," was the last of seven online events the International Union of Superiors General hosted titled "Sisters Empowering Women: A Place at the Table in the Spirit of Fratelli Tutti."

An international panel of sisters reflected on Pope Francis' call for dialogue in which he said he cannot imagine what the world would be like "without the patient dialogue of the many generous persons who keep families and communities together.

"Unlike disagreement and conflict, persistent and courageous dialogue does not make headlines," Francis wrote in the encyclical, "but quietly helps the world to live much better than we imagine."

Sr. Sheila Kinsey, an American member of the Franciscan Sisters, Daughters of the Sacred Hearts of Jesus and Mary who heads UISG's Sowing Hope for the Planet campaign, said dialogue and values of intentional nonviolence, including respect, honesty and justice, can be cornerstones of "integral ecology," a holistic approach to addressing current global environmental, economic, political and social challenges.

Sr. Filo Hirota, a peace activist and Mercedarian Missionary of Berriz in Japan who works on the Catholic Council for Justice and Peace of the Catholic Bishops' Conference of Japan, said Christian peacemakers, including sisters, must embrace the Jesus' "radical inclusiveness" to create dialogue as well as "spaces of healing" in a world riven by war and environmental damage.

"The role of women is a really important and necessary mission. I think we women have a special capability to work for peace by being a peaceful and nonviolent presence," Hirota said in an interview with UISG before the webinar.

Building on that call, Kenyan Sr. Teresia Wamuyu Wachira, a member of the Institute of the Blessed Virgin Mary (Loreto Sisters) and co-president of Pax Christi International, said the "way of active nonviolence" is a "core Gospel value, a way of life that nurtures hope and is a necessary foundation for a culture of peace."

Interviews with the participants and webinar moderator Caroline Gabriëla Weijers, the ambassador of the Netherlands to the Holy See, were recorded before the webinar and can be viewed on the UISG website.

A new book of poems from a Community of Jesus sister

Sr. Sharon Hunter, a member of the Community of Jesus, has written her memoirs in the form of a collection of 56 poems, To Shatter Glass, now available as a hardcover book.

Hunter entered the Community of Jesus, an ecumenical community in the Benedictine monastic tradition overlooking Cape Cod Bay in Orleans, Massachusetts, in her early 30s at the end of an abusive marriage.

"She confronted demons of the past and trauma brought with her, unresolved and in need of healing," the book description says.

The publisher says her writing is "infused with practical, sometimes stark reality" and complements "her desire to offer hope in extreme circumstances, beauty in our sufferings."

The book also features paintings by fellow Community of Jesus Sr. Faith Riccio, whose art can be seen in private collections and exhibits internationally.

"In words of courage, conviction, and terrible beauty, Sister Sharon Hunter dispels the myth of escaping life in the real world for the shelter of the cloister," Prejean wrote of To Shatter Glass. "She confronts the lingering demons of the past — a legacy of family alcoholism, abuse, violence, and depression — holding them up to the light of her daily encounters with the mysterious, often incomprehensible, love of God." 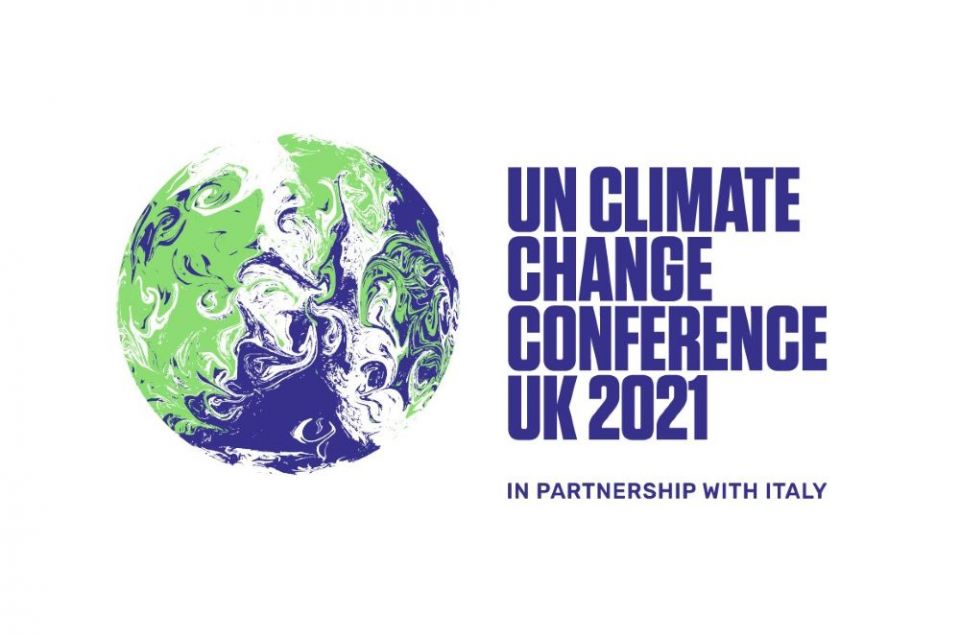 The logo for the U.N. Climate Change Conference, which will be held Oct. 31-Nov. 12 in Glasgow, Scotland (CNS/United Nations)

Is your congregation sending a representative to next month's United Nations Climate Change Conference in Glasgow, Scotland? If so, NCR environment correspondent Brian Roewe, who will be reporting from COP26, wants to hear from him or her. He can be reached at broewe@ncronline.org.