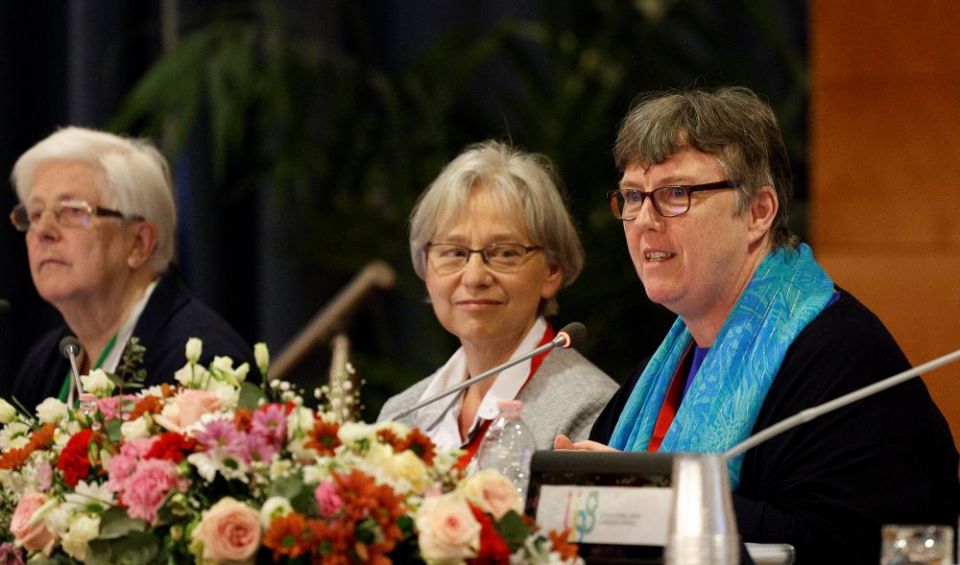 Sr. Mary Teresa Barron, right, superior general of the Sisters of Our Lady of Apostles, speaks May 3 at the plenary assembly of the International Union of Superiors General in Rome with Loreto Sr. Patricia Murray, left, UISG executive secretary, and Claretian Sr. Jolanta Kafka, outgoing president of UISG. Barron will serve as vice president of UISG through 2025. (CNS/Paul Haring)
Editor's note: Global Sisters Report's Monday Starter is a weekly feature from GSR staff writers that rounds up news from or about women religious that you may otherwise have missed.

The International Union of Superiors General closed its triennial assembly in Rome with the elections of a new president and vice president.

The executive board elected Sr. Nadia Coppa, an Adorer of the Blood of Christ, to the position of president, and Sr. Mary Teresa Barron, a Missionary Sister of Our Lady of Apostles, was elected vice president.

Coppa and Barron will serve in their respective roles until 2025.

The outgoing president of UISG is Sr. Jolanta Kafka, a Claretian Missionary Sister*, with Marianist Sr. Franca Zonta as the outgoing vice president.

The plenary assembly, which met May 2-6 in Rome, included 700 superiors general of UISG's member congregations throughout 70 countries.

"Building bridges with people, especially those most in need, is a call to be closer to those who need us and are waiting for us," Kafka said in her final speech. "I perceived, in the environment in which we were, a broad communion. It was as if when a person spoke, we met in her, and she was reflected in us. I feel grateful for this path we are taking." 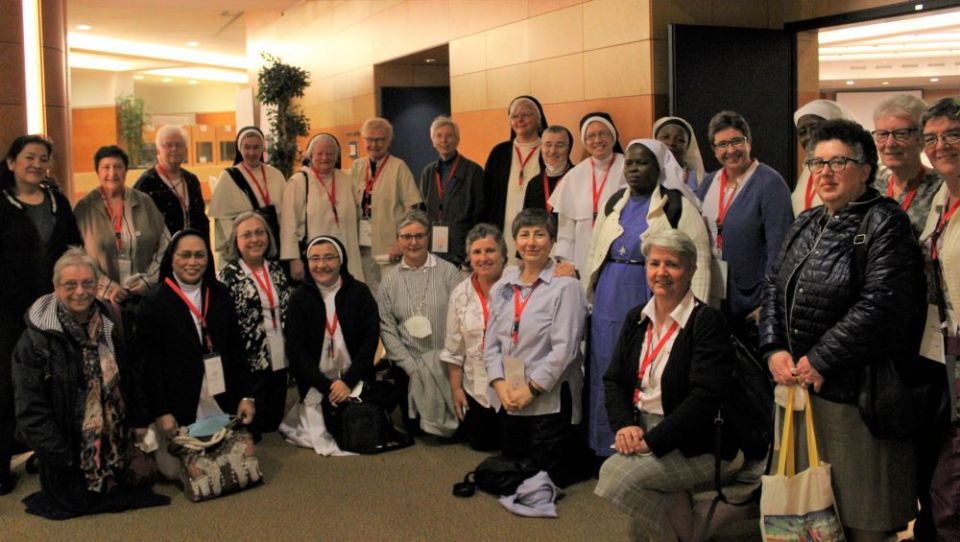 An informal gathering of Dominican sisters during the recent plenary of the International Union of Superiors General in Rome. (GSR photo/Chris Herlinger)

Dominicans discern new contexts for their charism at UISG assembly

In addition to the formal events, the UISG plenary offered an opportunity for sisters to meet informally, exchange news and discuss possible collaborations.

It was also a chance for sisters of different congregations who share the same charism to come together following two years of not meeting in person because of the global pandemic.

One such group was the Dominican sisters, who met May 3, the second day of the plenary.

The confederation seeks to foster cooperation and communication between various Dominican congregations, said Sr. Margaret Mayce of Amityville, New York, the confederation's coordinator and the former representative of the Dominican Leadership Conference at the United Nations. 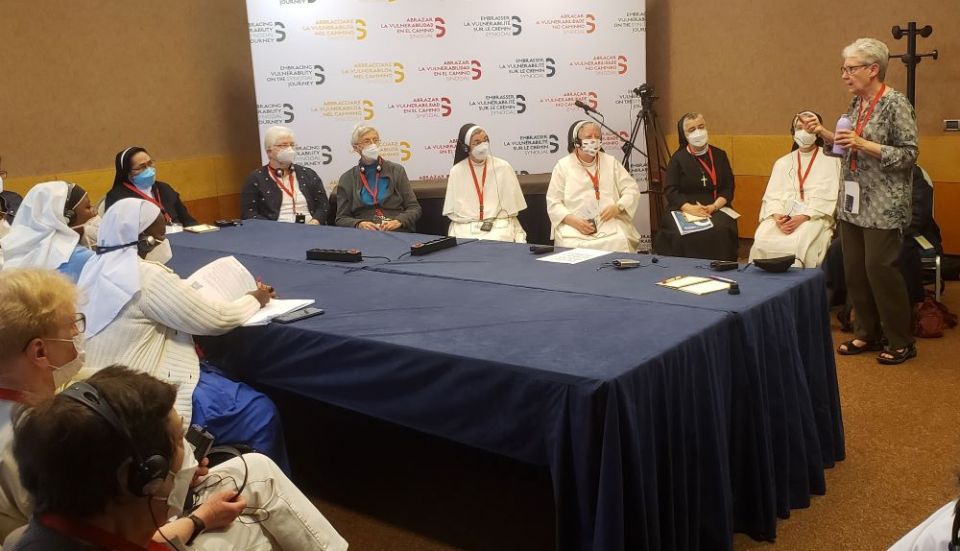 Dominican Sr. Margaret Mayce of Amityville, New York, right, speaks to an informal gathering of Dominican sisters during the May 2-6 plenary of the International Union of Superiors General in Rome. (GSR photo/Chris Herlinger)

Mayce called it "a blessing" to see the gathered sisters in person after two-plus years of Zoom meetings, though she did not downplay the importance of such encounters during the pandemic. Those have been "terrific" in bringing people together, she said. Still, Mayce added, it is always more satisfying to meet in person.

Although language differences posed a challenge during the plenary, Mayce said the Dominican sisters found ways to come together. In the coming years, and in anticipation of a meeting of Dominican leadership in Rome that will coincide with the next UISG plenary in 2025, the sisters' congregations need to think deeply about the future, she said.

"We need to consider the meaning of the Dominican charism, preaching, and the order's motto, 'Veritas,' or 'Truth,' in the present changing global context," Mayce said.

"How do we see this in a larger perspective, bigger than any one of our individual congregations, so that this vision can impel us into the future together?" 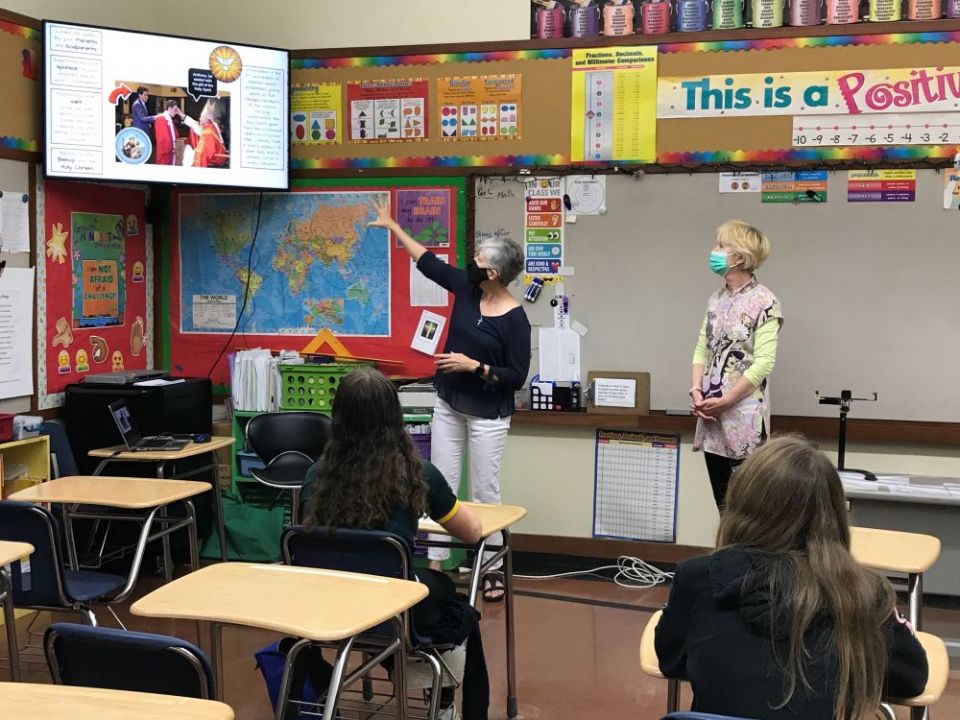 A new study from the Hartford Institute for Religion Research shows that although 90% of surveyed congregations have returned to in-person worship, religious education programming is still "far from normal."

With 615 responses from churches in 31 Christian denominations, the report revealed that half the congregations felt the pandemic caused major disruption to their educational programs, including Sunday school, adult education and church day camps. Those that suffered most include smaller churches, those in the Protestant mainline tradition and churches that delayed returning to in-person programs.

The study, "Religious Education During the Pandemic: A Tale of Challenge and Creativity," also showed that virtual religious education did not work well for children and that churches struggled to recover involvement after restarting programs that had been closed during the pandemic, particularly when compared to churches that continued in-person meetings with modified safety protocols.

The report was a collaborative, five-year research project funded by Lilly Endowment Inc. and led by the Hartford Institute for Religion Research at Hartford International University for Religion and Peace.

*An earlier version of this Monday Starter gave an incorrect community.

'All about the waking-up': Helen Prejean shares hope with Georgetown audience