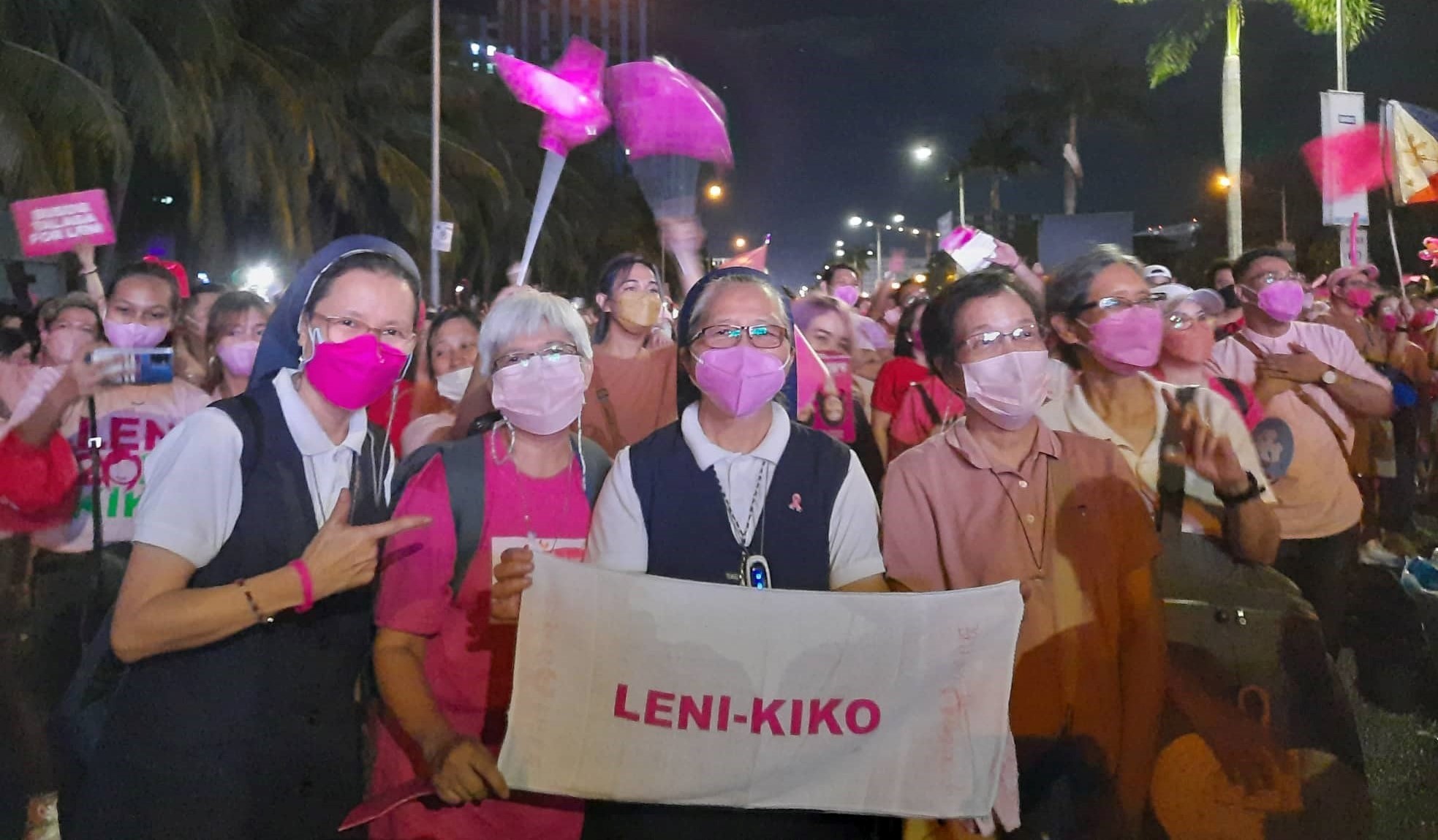 Holy Spirit sisters at the mammoth campaign rally on April 23, the birthday of presidential candidate Leni Robredo in Pasay City in Metro Manila with an estimated crowd of approximately. 500,000. (Courtesy of SSpS Sisters

Regardless of the outcome of the May 9 national elections and who becomes the next president of the Philippines, Vice President Maria Leonor "Leni" Robredo's run for the country's highest post will leave indelible marks on the landscape — and in the minds of many. Her supporters and volunteers — many of them young artists and first-time voters as well as religious sisters, brothers and priests — are painting walls, buildings and private properties with pink-themed murals that reflect the "good governance" platform that Robredo is running on. Pink is Robredo's campaign color.

Religious sisters have joined the painting frenzy by offering their convent walls to be painted over and doing some painting themselves with the help of artists from their communities and schools. No such activities happened in past elections, especially involving religious women, many of whom live within high convent walls and school campuses as well as in remote and difficult mission areas.

Robredo and her running mate, Sen. Francis "Kiko" Pangilinan, both lawyers, are running on a platform of good governance, no corruption, higher income-generating livelihood, especially for the agriculture sector, and a better life for those in the margins of society. Robredo has criticized President Rodrigo Duterte's war on drugs and his "kill, kill, kill" orders that have resulted in more than 12,000 people, often in urban, poor areas, being killed. Duterte recently belatedly apologized for his failure to deliver on his campaign promises to eradicate the country's drug problem. 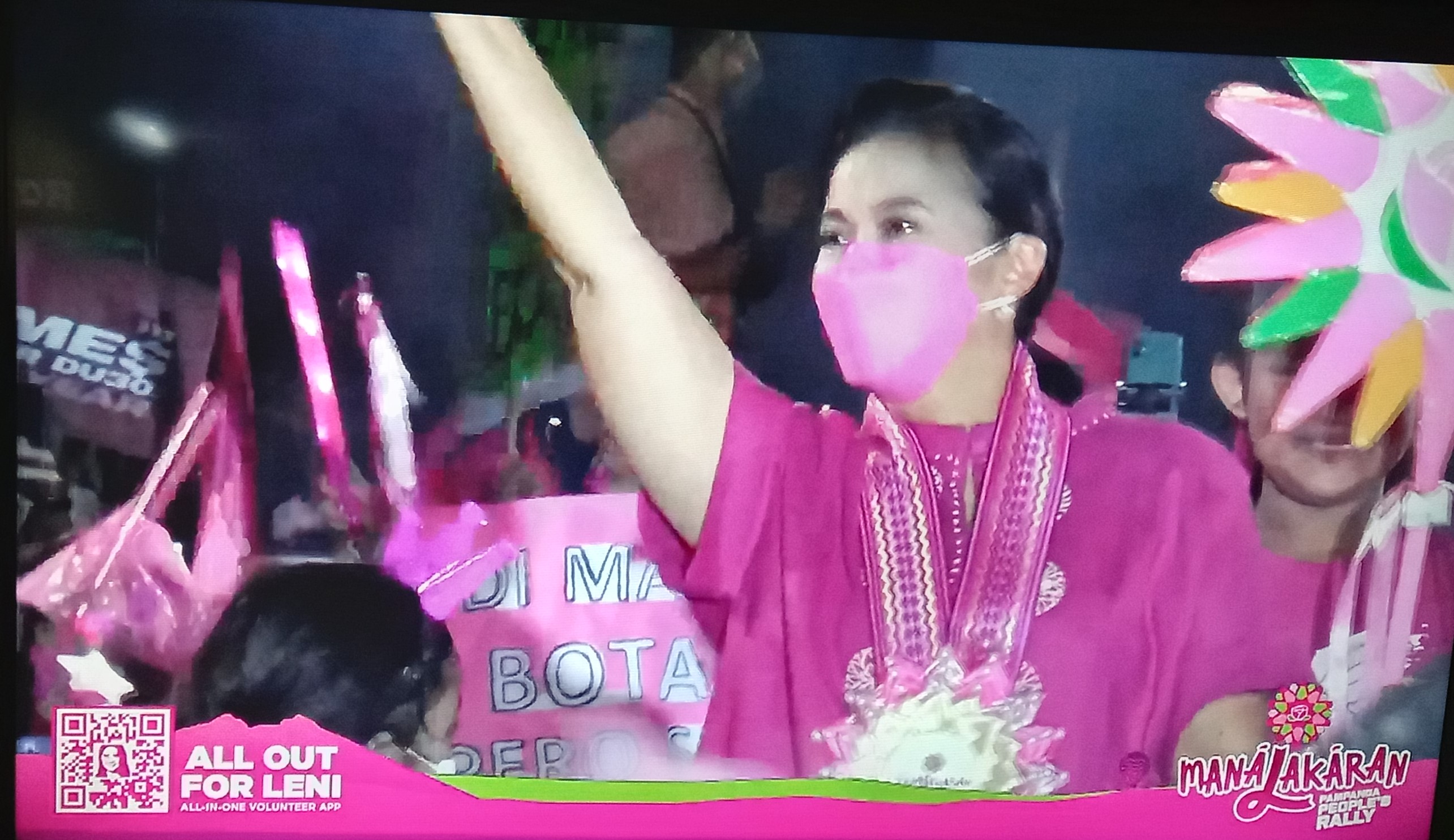 It could be argued that no vice president in the past could match Robredo's feat of reaching out to the most vulnerable in remote areas despite Duterte belittling her publicly. Duterte and Robredo belong to different parties. Their running mates lost the 2016 elections.

But Robredo, like several other so-called presidentiables, is also vocal about stopping the comeback to the presidency of a Marcos, namely, the son and namesake of former dictator Ferdinand Marcos Sr., who was ousted in the 1986 People Power revolution in 1986 and driven to exile in Hawaii. The Marcoses returned to the Philippines in 1991 to bury the dictator, who died in 1989. Several Marcos family members have since held elected positions despite Philippine and U.S. court cases involving stolen wealth and human rights abuses.

In April, 1,000 priests and bishops issued a manifesto supporting Robredo. A Facebook group Pari Madre Misyonero Para Kay Leni (Priests, Sisters Missionaries for Leni) with 1,100 members has been holding election-related activities since the campaign period began in February. Religious congregations of women and men have issued statements supporting Robredo, something not done in the past because of disparate interpretations of "separation of church and state." 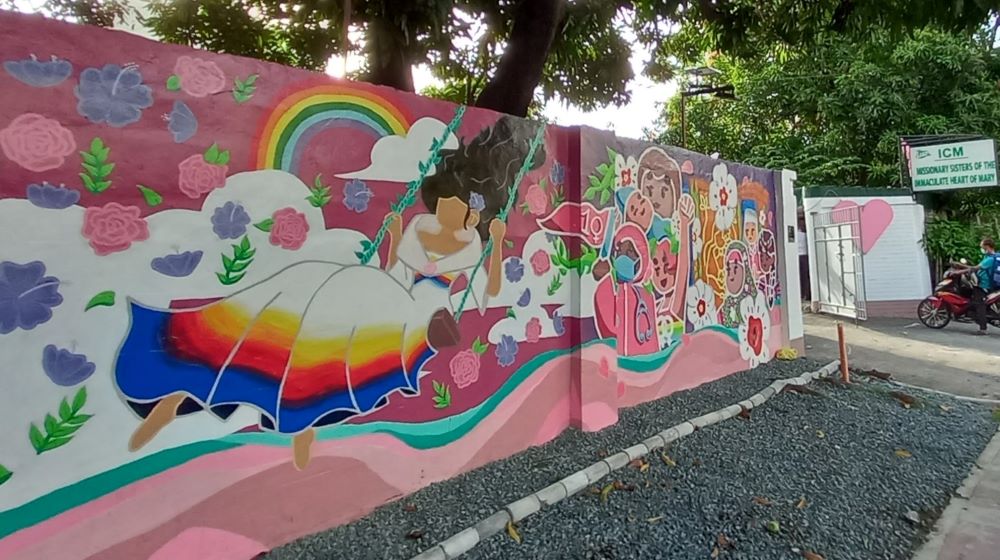 The eight-panel mural on the convent wall of the Missionary Sisters of the Immaculate Heart of Mary (Ma. Ceres P. Doyo)

On Feb. 25, the Religious of the Good Shepherd Philippines-Japan Province released a statement supporting the Robredo-Pangilinan team. Province leader Sr. Susan Montano told GSR that they were "recognizing in (Robredo) the kind of governance our country needs during this time of recovering from the pandemic crisis and the looming return of the Marcoses. A total of 112 sisters and 335 lay partners from our 17 communities signed."

Huge parts of the Religious of the Good Shepherd's convent wall spanning two streets in Quezon City in Metro Manila now sport murals, which have the candidates' names, plus symbols and colors. Alumni from RGS schools helped paint, even as it rained.

Robredo's mammoth campaign rallies have eclipsed those of her nine fellow presidential candidates. A record-breaking rally was held south of Metro Manila on April 23, with an estimated 500,000-plus in attendance. It was preceded by a big rally in Pampanga province, the home of the giant Christmas parols (lanterns), with an estimated 220,000 attendees. 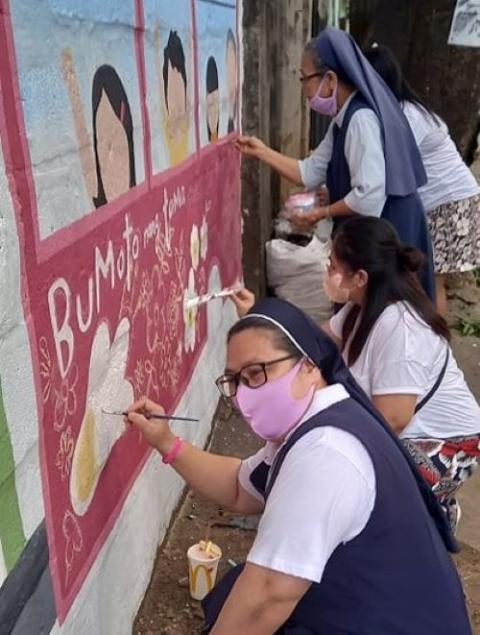 Although Robredo heads the Liberal Party, she decided to run as an independent to show inclusivity. Robredo is one of 10 candidates vying for the presidency but she and Ferdinand "Bongbong" Marcos Jr. are the top contenders, with the latter ahead in polls. But recent polls show Robredo inching up, reminiscent of her 2016 run for the vice presidency. She defeated top contender Marcos Jr., whose years-long protests ended with court decisions favoring Robredo.

A long portion of the wall of the Queen of Peace Convent of the Missionaries of the Immaculate Heart of Mary in Quezon City also has an eight-panel mural. Sr. Eleanor Llanes, a visual artist, told Global Sisters Report she was inspired after Robredo announced her candidacy in October 2021. "I was amazed at the sprouting of beautiful murals in various places in the Philippines," she said "Creative individuals and groups were making political statements through colors and lines on walls and buildings. Being an artist, I admired the creative endeavors that showed love of our country. Deep within me was a desire to also paint a mural.” 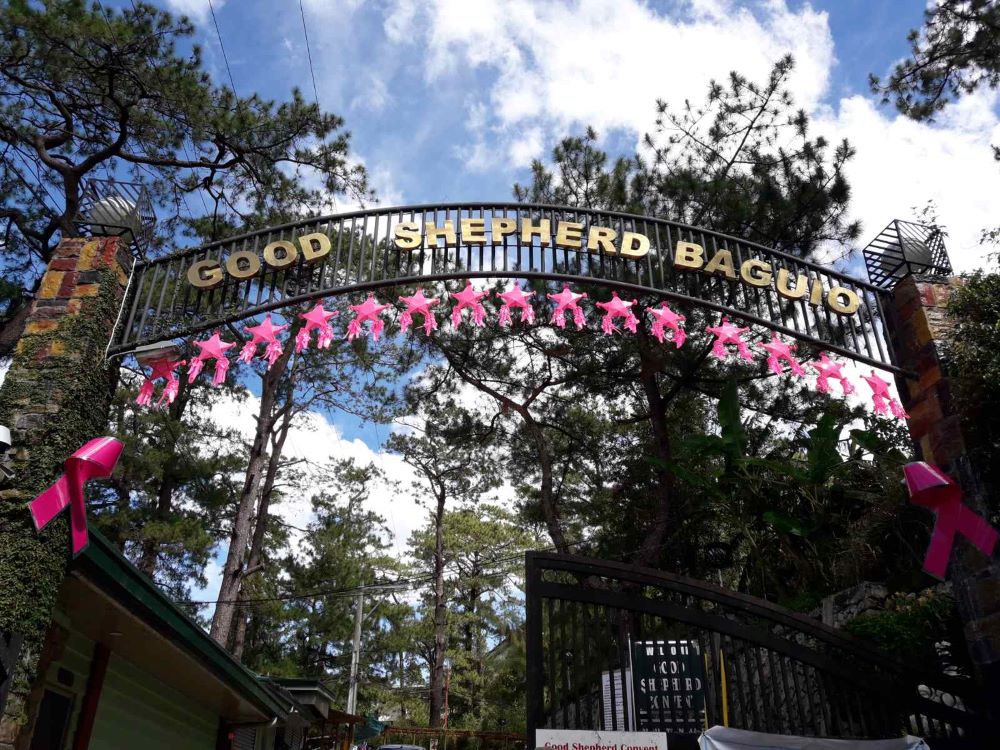 At Christmas, the much-visited Religious of the Good Shepherd compound in the mountain city of Baguio, a tourist destination, was decked with pink parols (star-shaped lanterns), a Filipino Christmas symbol, as were many other convents and schools. (Provided photo)

With other sisters, Llanes began imagining the mural with the theme "Kulay rosas ang bukas," which translates as "rose pink is the color of tomorrow," a Robredo campaign slogan. Artists and volunteers began planning the mural, intending for its symbols and colors for to remain long after the election.

Dozens of volunteers, professionals and even students preparing for final exams, helped complete the mural finishing in seven days. Others supported the effort with snacks, lunches, donations and other needs.

"We were filled with joy and gratitude as we looked at the finished mural and read the inspiring words on them, among them: 'Kulay Rosas ang Bukas,' 'Towards the Dawn,' 'Together We Journey,' 'Hope for our children.' "

The Missionary Sisters Servants of the Holy Spirit also participated in painting murals on the concrete wall of their school in Quezon City. According to Sr. Faith Taneo, a long stretch was turned into a huge "coloring book" in which anybody could contribute to the design.

In response to the call of the Catholic Bishops' Conference of the Philippines to promote honest, clean and peaceful elections, the sisters also led prayers in the campaign headquarters of the Robredo team. Online daily prayers are being held for 40 days starting March 30 until May 8, the eve of the elections.

Related: Deported from Philippines, Sr. Patricia Fox stays in solidarity over the distance