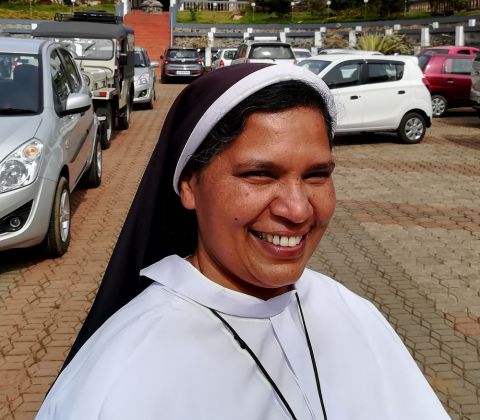 Kochi, India — An expelled Catholic nun suffered a setback July 14 when the Kerala High Court refused her plea for protection against eviction from the convent where she currently stays.

Lucy Kalappura was expelled from the Franciscan Clarist Congregation in August 2019. The Vatican rejected her appeal against dismissal three times that prompted the congregation to order her to vacate the convent in Kerala's Wayanad district.

"Do not throw me out on the street. I am a practicing nun for 39 years. I do not have anywhere else to go. It is important for me to stay at the convent to continue my position as a nun," Kalappura told the court as she broke down.

The 56-year-old retired schoolteacher argued her case in person. Her lawyer has withdrawn from the case, as she did not have enough money to pay the fee.

"I am a woman; a nun fighting for justice," Kalappura told the court. "It is important for my nunship that I continue in the convent."

Justice Raja Vijayaraghavan, who heard the nun, said the high court's order of police protection last year cannot continue if she intends to continue at the convent.

The judge said if she stays at the convent, her conflicts with the staff or authorities there will continue. The congregation had accused her of indiscipline.

"This is for your own safety," the judge added. "You have made serious allegations against the vicar. You have admitted yourself that you are subjected to ill-treatment ... It is better to move out. We can give you protection."

Kalappura told the court that she has challenged the eviction order in a civil court and that she wishes to continue staying at the convent until that case is decided. She said the court may withdraw the police protection granted to her, but she should be allowed to stay at the convent, as she has no other place to go.

The nun also said that while she had the police protection, she had confidence to venture out. The police protecting her had come to her rescue when the convent authorities shut her out of the kitchen or dining area.

The court, however, said the only plea before it was for police protection, and it was willing to grant it as long as she is not staying at the convent.

The convent authorities during the brief hearing said the nunnery has its discipline, and Kalappura was not willing to follow it. They also said Kalappura returned to the convent at varying hours in the night, which was not permissible.

The convent also pointed out that the civil court's order granting her protection from arrest has expired.

In June, the Vatican rejected Kalappura's third appeal of the congregation's decision to expel her for "failing" to provide an explanation for her lifestyle, which it said violated church rules.

The congregation expelled Kalappura in August 2019 after she joined a protest by members of the Missionaries of Jesus Congregation seeking the arrest of Bishop Franco Mulakkal, accused of raping a nun.

The congregation in its notice had termed as "grave violations" Kalappura possessing a driver's license, buying a car and taking a loan for it, and publishing a book and spending money without the permission and knowledge of her superiors. The Vatican had ratified the decision.

The nun, however, denied the charges leveled against her, saying many of them were a "deliberate attempt to paint her in bad light."

In her book, Karthavinte Namathil (In the Name of Christ), Kalappura alleged sexual abuse and assault in convents and seminaries. She called for institutional reforms to curb this.

She also alleged in the book that she also faced attempts of sexual assault at least four times and said many nuns easily succumb to intimidation. The church denied the charges.

[This story originally appeared on Matters India's website. Matters India is a news portal that collaborates with Global Sisters Report and focuses on religious and social issues.]

Read this next: Indian nun expelled from her community loses Vatican appeal, goes to India courts