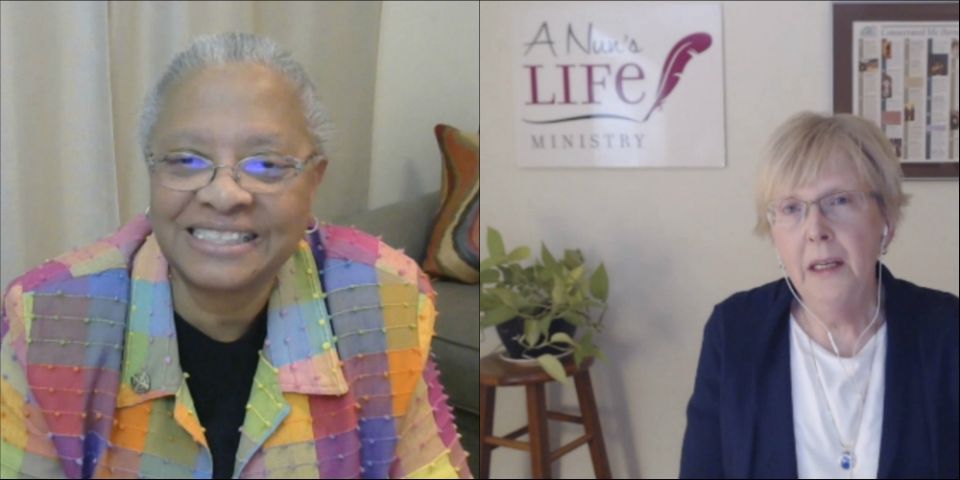 The National Religious Vocation Conference has always paid particular attention to newer entrants to religious life so vocation ministers can understand their motivations and needs. But previously, getting them to the annual convocation was difficult financially.

"It was so limiting because we could only invite five or six" new entrants a year, said Sr. Deborah Borneman, a member of the Sisters of Sts. Cyril and Methodius and director of mission integration for the conference. The new entrants would fly in, be part of a panel discussion and fly out.

"But what if we could invite new entrants to the entire convocation and have one new entrant at each table, so every time there's conversation, they can listen and be listened to?" Borneman said. That could change things dramatically, she added.

Thanks to a grant from the Conrad N. Hilton Foundation, which also funds Global Sisters Report, the 2020 convocation, held Oct. 28-31, had nearly 400 participants, including 114 new entrants and 60 serving in elected leadership. The convocations usually draw about 300 attendees, Borneman said.

The original plan was to use the grant to invite 30 sisters who entered religious life after 2000 to this year's gathering — enough for one at each table at the convocation. Then there was a global pandemic.

As officials worked to make the convocation a virtual experience, Borneman said, they realized that once the upfront costs of the technology were covered, there was little extra expense for each additional participant.

"When we met with the staff and the board, it came down to, 'Are we dreaming big enough?' " Borneman said. "What would it look like if we could have every NRVC member invite a new entrant?"

Since some communities may not have newer entrants, or those they have may not be able to leave their ministries, members were also given the option of inviting someone in leadership.

Borneman said the fresh faces will give the organization a better perspective on what draws people to religious life and what they need once they enter.

Instead of panel discussions following a keynote speech, the new entrants were asked to record a video about life as a newer religious and where they find hope; "Focus on Hope" was the theme of the event. Several of the videos were shown after each keynote address.

Sr. Maxine Kollasch of the Sisters, Servants of the Immaculate Heart of Mary, one of the founders of A Nun's Life and a board member of Communicators for Women Religious, gave a workshop on communicating messages of hope, much of which revolved around Cycling With Sisters, bike rides designed to highlight the social justice work of women religious.

"Sisters have been doing this work for centuries," Kollasch said. "Religious life is vibrant and relevant, and God continues to call people today."

The Sept. 11 Cycling With Sisters event, a 60-mile bike ride in northern Indiana, reached more than 12,000 people, she said — people who got to see just how vibrant religious life remains, she said.

"And there's things you can't measure," Kollasch said. "The excitement and energy this even generated was amazing."

The final keynote of the event was by Sr. Addie Lorraine Walker, a School Sister of Notre Dame, associate professor of pastoral theology, and founder and director of the Sankofa Institute for African American Pastoral Leadership at Oblate School of Theology in San Antonio.

"The gift of hope given is not a solitary gift, but a gift given to the community of believers," Walker said. "The gift given is for the good of the whole."

She noted that Sankofa is a West African word meaning to go back and fetch what you forgot, adding that we need to take the best of the past and move forward.

"We need to reconnect with the stories of our charisms that brought us into being," Walker said. "That God that called us and brought us and taught us and never left us is just the same today."

Connecting to that hope is critical, she said.

"We're living in a time when hope is needed," Walker said. "We are the hope bearers."