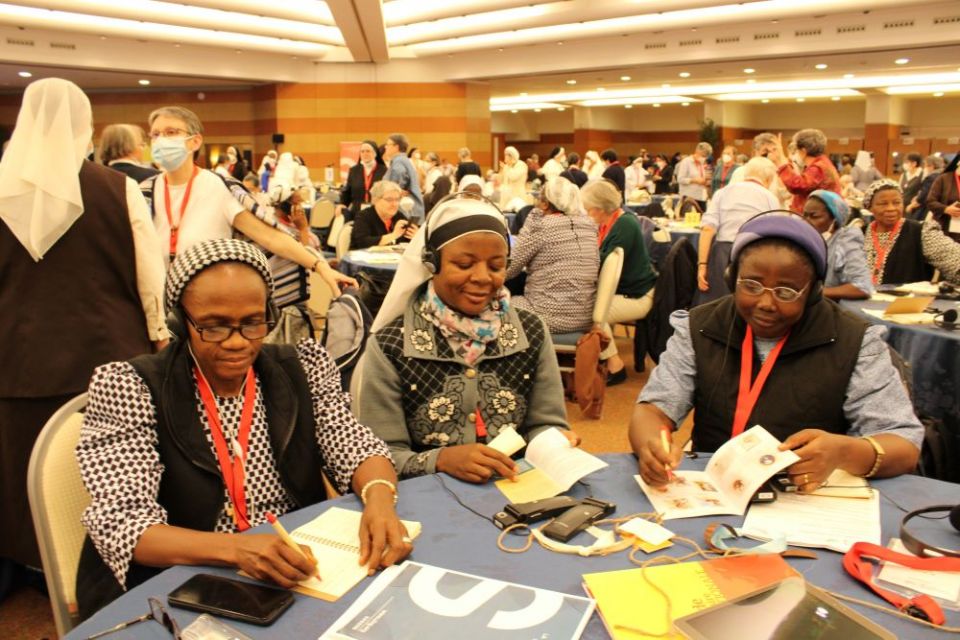 Women religious look through their plenary materials May 6, the final day of the 2022 plenary of the International Union of Superiors General in Rome. (GSR photo/Chris Herlinger)

Rome — With song, prayer and ritual, leaders of women's religious congregations from around the world concluded five days of meetings in Rome on May 6, affirming their commitment to the process of synodality and embracing a journey of vulnerability that they believe is vital for the renewal of the church, religious life and their own communities.

The pledge was a culmination to the May 2-6 plenary of the International Union of Superiors General, during which numerous sisters, theologians and speakers voiced their support for Pope Francis' vision of a synodal church that embraces its early historical roots, affirms the need for diversity, listens, and is more welcoming to those on society's margins.

The 23-word commitment, spoken in unison by the 520 sisters attending the plenary in person and silently by another 200 or so who attended online, reads: "I commit myself to live vulnerable synodality through service as a leader, animating it within the community, together with the people of God."

The plenary brought a strong sense of communion among the sister-leaders participating, UISG President Sr. Jolanta Kafka of the Claretian Missionary Sisters said in an interview after the gathering ended.

Kafka said she needed more time to reflect on the plenary but that there was a clear call for a paradigm shift in the approach to leadership — for transformation, not just change. The shift is to be more respectful, more inclusive and less hierarchical.

"Always, the plenaries give light" that lasts, she said.

'I commit myself to live vulnerable synodality through service as a leader, animating it within the community, together with the people of God.'
—UISG plenary commitment statement

"We have felt accompanied," Sr. Lia Latela, general councilor of the Claretian Missionary Sisters, said during one of the plenary's last events, a sharing of reflections. "We have broadened our horizons. We feel at home."

"Our vulnerability is prophetic. We need to embrace it as a strength," said Sr. Gemma Simmonds of the Congregation of Jesus, a senior researcher at the Margaret Beaufort Institute of Theology in Cambridge, England. "We want to walk as communities of hospitality."

Latela and Simmonds were two of the assigned official listeners in charge of sharing "echoes" of what was said during the five days of meetings, a way of affirming the emphasis on more listening in the church.

The third listener was Sr. Maria Cimperman, a member of the Religious of the Sacred Heart of Jesus and associate professor of theological ethics at the Catholic Theological Union in Chicago, who introduced the commitment statement to the attendees.

"Everyone is ready for this transformation," Cimperman told Global Sisters Report in an interview on the closing day of the plenary.

Sr. Patricia Murray, executive secretary of UISG and a member of the Institute of the Blessed Virgin Mary, also known as the Loreto Sisters, agreed. 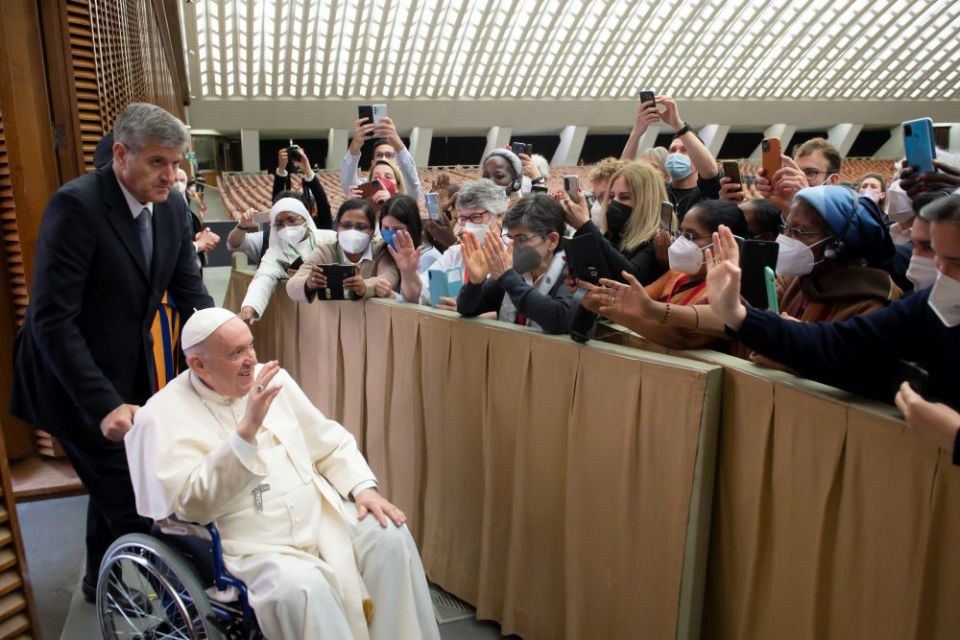 Pope Francis is pushed in a wheelchair by his aide, Sandro Mariotti, as he greets participants in the plenary assembly of the International Union of Superiors General on May 5 at the Vatican. (CNS/Vatican Media)

The sisters' public affirmation and final reflections came a day after the sisters attended a May 5 papal audience with Francis at the Vatican in which he praised their leadership on synodality and warned against congregational renewal that risks being "frozen in time."

"The church does not want frozen nuns. That's useless," Francis told the sisters. "The challenge is that consecrated life has to be integrated into a church — not a frozen church, but a real church."

He also encouraged the sisters to seek ways to fully participate in the synodal process and invite others to do so in their local parishes and their communities and organizations.

Throughout the plenary, sisters also explored new paradigms and approaches of leadership for the church, their congregations and themselves. The theme of vulnerability resonated with participants, many of whom came to the UISG assembly battered by the strains of leading during a pandemic, war, natural disasters, upheavals in ministries, and the stresses of religious life. Repeatedly, they heard messages of renewal and transformation from speakers, UISG leadership and each other as they met in small groups in person and online. 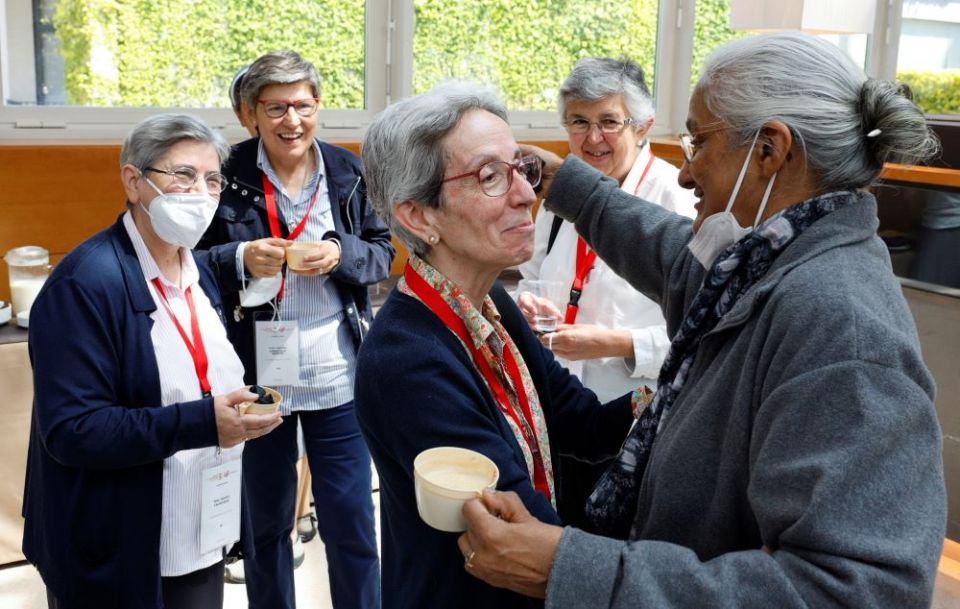 Sr. María Rita Calvo Sanz, superior general of the Sisters of the Company of Mary, Our Lady, greets Sr. Monica Joseph, superior of the Congregation of the Religious of Jesus-Mary, during a coffee break May 3 as superiors of women's religious orders meet for the plenary assembly of the International Union of Superior Generals in Rome. (CNS/Paul Haring)

This assembly was notable on several fronts. It was the first to combine in-person and online participation. Online attendees said the days were enriching and that they felt fully a part of the meeting. But there was no mistaking the in-person energy and the hesitant hugs — given COVID protocols — that renewed connections that the sisters had missed.

Reflecting the desire for inclusivity, the proceedings were translated into multiple languages, including Portuguese, Spanish, French, Polish, English, Arabic and Italian. Masses, including the readings and prayers, were celebrated in multiple languages. At the closing Mass May 6, readings and prayers were also offered in Hindi, and the Our Father was prayed in Aramaic, as Jesus would have prayed and taught it.

Participants repeatedly expressed their appreciation for UISG leadership and staff, who created a program with sessions that provided spiritual renewal and both challenged and affirmed the sisters' thoughts about leadership and religious life. They also thanked UISG for its guidance and the many webinars and resources provided, particularly its ongoing support during the start of the pandemic. The superiors also offered hearty applause and affirmation for Murray's leadership.

Throughout the final day, participants said they believed that together, the UISG attendees had struck the right notes on the need for change within the church.

During individual reports from the constellation language group meetings held May 6, multiple representatives expressed a desire for their communities to reconsider the formation of their sisters in light of synodality and how this might affect their specific leadership structures.

Synodality requires a change from the church's "pyramid-like" leadership structure to one that is "circular" to allow for the participation of all of the people of God, various groups said during public reports of regional discussions.

Several group representatives addressed the need for their communities to prioritize healing and reconciliation in light of the numerous abuse scandals within the church. The French- and English-speaking religious from Canada also expressed a desire to recommit to the healing process between the Catholic Church and First Nations communities.

Two superiors from Africa said the overall plenary was both enriching and empowering.

Sr. Agnes Mpode Njume of Cameroon, a Sister of St. Therese of the Child Jesus, said the plenary's themes confirmed her life experience as an African sister and recognized that community and the support and love of all are important.

"We need to listen to everyone, and we need to do that with the heart," she said. "Listening and action are what I take home with me."

Njume said the idea of synodality is "clearer and stronger" to her after the week in Rome, though she added that the concept fits the tradition of her congregation, which was formed after the Second Vatican Council.

Sr. Prisca Matenga, a Zambian Daughter of the Redeemer, thanked UISG for emphasizing the combined themes of vulnerability and synodality, saying she returns home seeing "things in a new way." 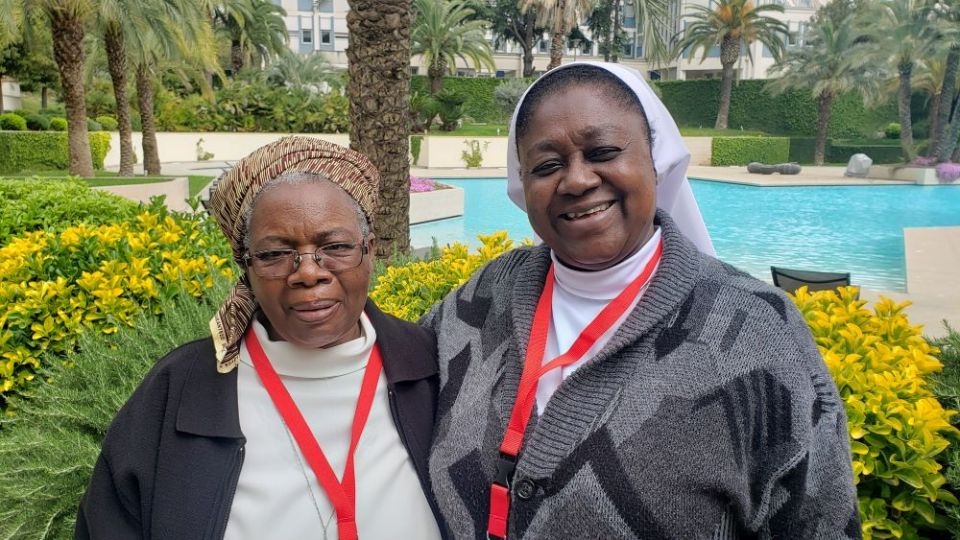 Sr. Prisca Matenga, a Zambian Daughter of the Redeemer, left, and Sr. Agnes Mpode Njume of Cameroon, a Sister of St. Therese of the Child Jesus (GSR photo/Chris Herlinger)

Matenga also said it was important to meet with other African superiors during the plenary, which would help lay the groundwork for future collaboration and support.

"It will help us affirm each other as we try to be joyful sisters," she said.

Both Ngume and Matenga said the papal audience was important but also moving, particularly since Francis, who is being treated for knee problems, was not afraid to show his own vulnerability. The pope's appearance before the women religious was the first time Francis had been seen in public in a wheelchair.

The papal audience "was a powerful reminder of what my life is all about," Ngume said. "Pope Francis is encouraging me in my own weakness to give myself to the service I am called to."

Conference on the History of Women Religious fulfills important role

Metaphors for the future