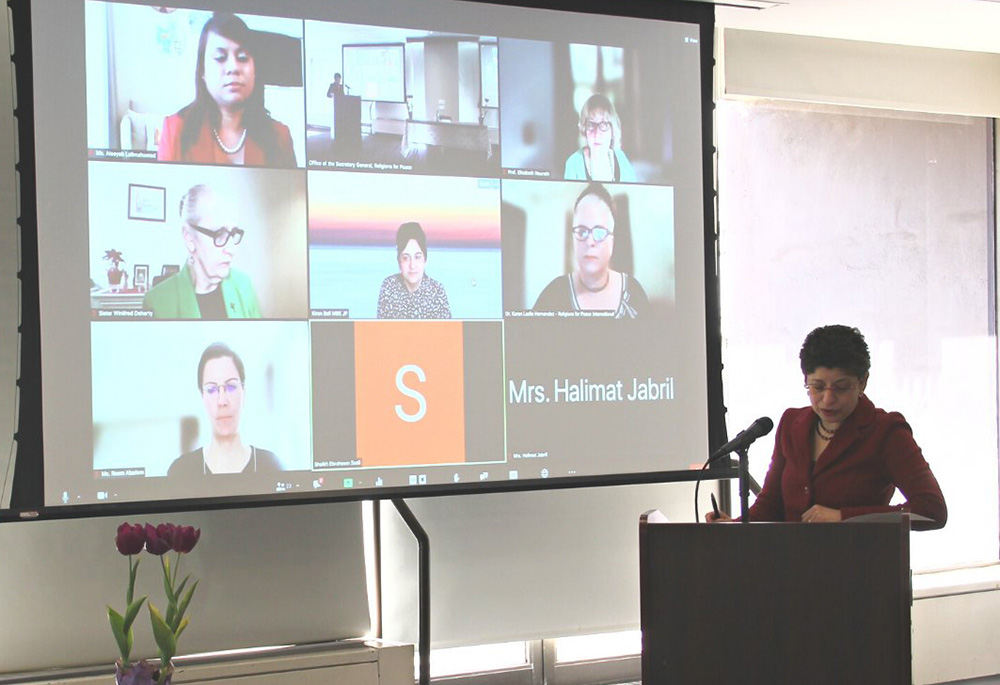 Azza Karam, secretary general of Religions for Peace, stands at a podium during the organization's hybrid event March 15 held in the U.N. Church Center in New York, during the Commission on the Status of Women. Winifred Doherty, center left on screen, was a panelist for the event, titled “Multi-religious Collaboration: The Tipping Point for Engendered Climate Change Policies.” Representing Talitha Kum, she reflected on the issue of human trafficking. (Screenshot courtesy of Winifred Doherty)

Overall, despite the impact of COVID-19 on face-to-face meetings and the recommendation that girls and women outside New York not travel to New York for the event, the hybrid and virtual nature of the event made it a success. Enthusiasm was high despite the multiple global crises facing humanity and the planet.

The theme this year: "Achieving gender equality and the empowerment of all women and girls in the context of climate change, environmental and disaster risk reduction policies and programs." Member states acknowledged that girls and women are disproportionately affected by the adverse impacts of climate change, environmental degradation and disasters. The commission's agreed conclusions document seeks to address these issues at the local, national, regional and global levels.

Read this next: Women's lives depend on UN commission's work

The agreed conclusions document indicates an urgency to identify, address and eliminate persistent historical and structural inequalities such as racism, stigmatization and xenophobia. These inequalities are manifested in unequal power relations between women and men, discriminatory laws and policies, negative social norms and gender stereotypes. They result in behaviors and practices like the unequal sharing of unpaid care and domestic work, the persistent gender pay gap, the denial of a place for women at the negotiating table, and gender-based violence including domestic violence.

Increasing vulnerability to poverty results from disadvantages that women experience in accessing resources, inheritance, land, social protection systems and public services. These discriminations begin in childhood where the girl child is discriminated against in favor of her brother for nourishment and education; where she engages in unpaid care work; is subjected to gender-based violence and sexual harassment, at home, school or on the street; or is given in child marriage under the guise of "protection" — all permitted and condoned by negative social norms.

The text of the 20-page agreed conclusions urges governments to take a range of concrete actions:

The list is exhaustive, and I'm sure your dedicated issue is there!

The agreed conclusions, the fruit of 60 hours of negotiations this year among member states, is a plan for moving forward. We nongovernmental organizations (or NGOs), faith-based groups, civil society and dedicated advocacy groups — big and small — eagerly follow these negotiations, bringing pertinent issues needing to be addressed and included as full implementation of girls and women's human rights! Our Working Group on Girls ensured that girls' issues and voices were included.

According to reporting by the U.N., the vice-chair of the commission, Antje Leendertse (Germany), facilitated the negotiations and noted that "this is the first time we address the nexus of gender equality and climate change," and that this nexus was important to all delegates who engaged in constructive discussions to reach this agreement. She was supported by the new executive director of UN-Women Sima Sami Bahous (Jordan) and her team, and all came together under the leadership of the chair of the commission Mathu Joyini (South Africa).

While consensus was enjoyed, a number of member states did state reservations. Some of them referenced "human rights defenders"; others said language like "multiple and intersecting forms of discrimination" was ambiguous and unacceptable. Some regretted "the omission of references to the Global Compact for Safe, Orderly and Regular Migration," as the U.N reported.

While I am keenly interested in the agreed conclusions — very important and hugely contested — a whole lot more was happening at the Commission on the Status of Women in both the formal program (with its expert analysis of the issues) and the side events showcasing member states, U.N. agencies and NGOs' promotion of good policy and practices.

Then there was the "parallel program" hosted on the NGO CSW Forum virtual platform. This year over 700 events were organized by girls and women in all their diversity — their communities, activists, survivors, scholars and champions. They highlighted specific practices, and celebrated achievements and successes — learning, dialoguing, discussing, networking, planning, hoping, dreaming, crying and healing — all accompanied with action towards a sustainable way of living in harmony with Mother Earth, and in solidarity with each other, ensuring equitable distribution of resources.

Religious sisters and faith-based NGOs from around the world were present for the events. Some congregations had virtual booths on the NGO CSW virtual platform. Four groups — UNANIMA International, Justice Coalition of Religious, Loretto at the UN, and Good Shepherd Sisters — had virtual booths where they hosted multiple events addressing the theme of CSW from policy and ministry perspectives, while facilitating story sharing from program participants.

I was invited to be a panelist with Religions for Peace who were reflecting on "Multi-religious Collaboration: The Tipping Point for Engendered Climate Change Policies." Representing Talitha Kum, I reflected on the issue of human trafficking, commenting:

The root causes of human trafficking can be attributed to inequalities caused by economic systems particularly the neoliberal capitalist systems that exploit people and planet. There is no distinction between attitudes that discriminate and perpetuate violence and infringement of girls and women's human rights and the ones that exploit the planet. Pope Francis in his final document on the synod on the Amazon states "the Amazon today is a wounded and deformed beauty, a place of suffering and violence. Attacks on nature have consequences for people's lives."

The nexus of human trafficking and climate displacement is well known and so I concluded by asking: What must we do?

We must be updated on the issues and engage new ways of understanding the interconnectedness of all — the person, the feminine. We are called to embrace, honor and learn from differences. We must seek to develop mindsets of both/and not either/or. A binary approach to life restricts, excludes, exploits and destroys. The Holy One is gracious and merciful. We, multi-religious and multi-stakeholders, are uniquely placed and called to embrace 'difference', live the values we profess, center the sanctity of the person, the sacredness of our Indigenous sisters and brothers and of our Mother Earth. We cultivate attitudes of abundance for all while confronting mindsets of scarcity. We are interconnected — persons, Indigenous persons, the feminine, all others, all life forms and Mother Earth — all containing and revealing the Holy One in our midst. We must reverence this knowledge ourselves and share it in our communities, denouncing any and all violations especially of gender injustice, and climate injustice so that life — all life — every life and the life of Mother Earth can be healed, renewed and flourish anew.

I believe that this is the struggle of advocacy, of the CSW66 processes that engaged this year. This is the struggle we must bring forward every day into the future, honoring in new and deep ways the existence of the feminine among us, embodied specifically in our girls and women of all ages and in all their diversity — and in Mother Earth herself.