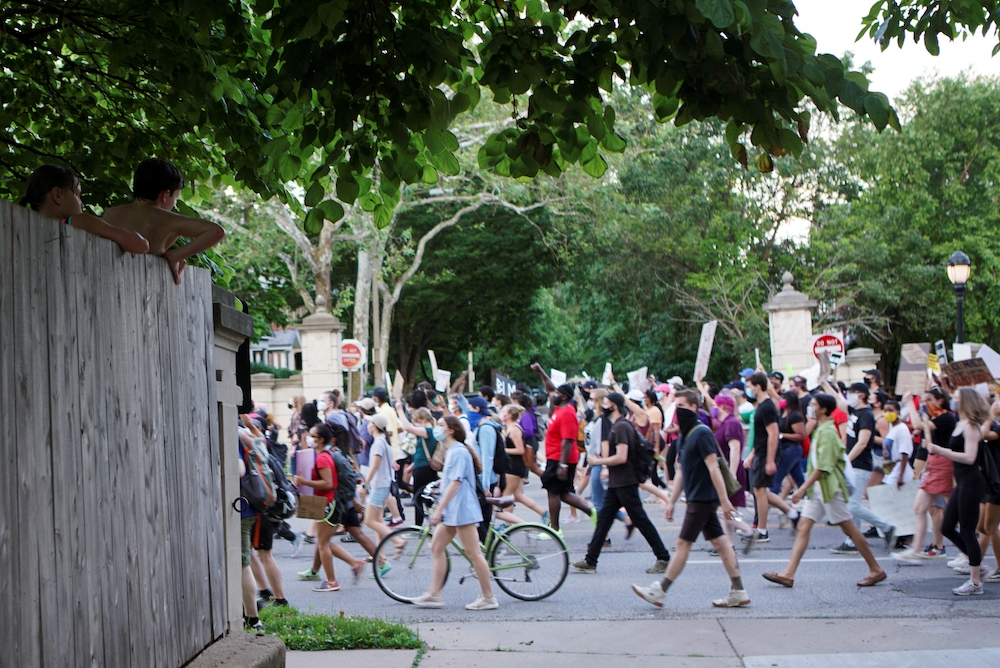 Editor's note: For the next few months, Global Sisters Report will feature biweekly interviews with Catholic sisters and former sisters who worked and/or marched in Selma, Alabama, in 1965. They were featured in the 2007 PBS film "Sisters of Selma: Bearing Witness for Change" by Jayasri Hart, and we wanted to give them an opportunity to share their thoughts about current racial events, protests and Black Lives Matter. GSR invites any sister or former sister involved in Selma in 1965 to be part of this Q&A series. Email Carol Coburn at Carol.Coburn@avila.edu if you would like to be interviewed.

As a young Sister of Loretto, Christine Nava served as the Webster College librarian. Then she made a significant choice in her religious life.

As the civil rights movement was getting underway in the 1960s, she made the decision to participate in an "experimental community" and sociology practicum established by another Loretto sister and colleague, Therese Stawowy. This included moving into the inner city of St. Louis, Missouri, living with undergraduates and getting to know local people in the Black and ethnic neighborhoods.

Traveling to Selma, Alabama, to participate in a 1965 march for voting rights was "a natural consequence of what we were doing. Our commitment as religious women was to work for our brothers and sisters. ... We could never really help our [neighbors] better themselves unless we really walked in [their] shoes — walked the walk and walked the talk," Nava said in the 2007 PBS documentary "Sisters of Selma: Bearing Witness for Change." This experience led her "to think I could do my share to improve humanity on my own."

Even after Nava left the Loretto community, her heightened consciousness of the world informed her future decisions. She married and raised children, aware that they needed to look "beyond their privilege," to have "diverse" experiences and be exposed to a variety of ideas. Nava worked as a substitute teacher while she raised her children and later moved into the political arena to work for a woman congressional candidate and to fight racist practices, corporate greed and the destruction of the environment.

Over the summer, Christine Nava reflected on her past and "the different lives I have lived" with Global Sisters Report. 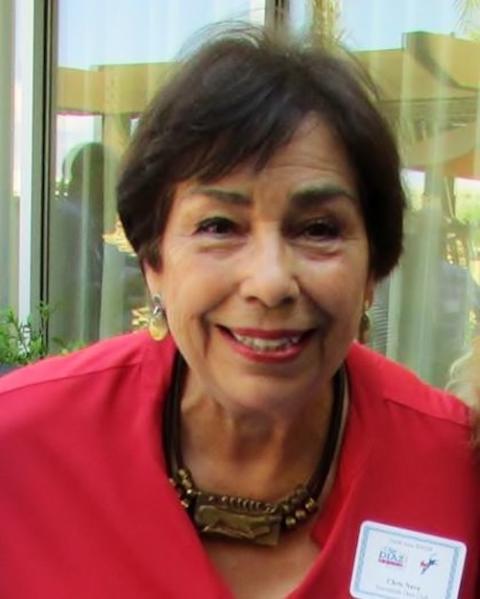 Christine Nava at a political fundraiser she co-chaired for a candidate running for mayor of Escondido, California, in 2014 (Provided photo)

GSR: What are the differences between your experiences in Selma in 1965 and the Black Lives Matter movement in 2020?

Nava: They are similar but different. From the moment we arrived at the airport to fly to Selma, I noticed that it was all men [other than the five sisters I traveled with]. Some had a disdain for us — they thought it wasn't proper to be there because we were nuns and women.

When we got to Selma, it was also mostly Black, male leadership from the Student Nonviolent Coordinating Committee. That's a big difference I see compared to now. Black Lives Matter is more representative, more diverse.

Another difference was media coverage. Black Lives Matter has the ability to use media and social media, in particular, to provide wider exposure to the movement in almost every detail. Compared to flyers, phone trees and homemade communication tools, current technology gets the word out better and faster. Additionally, in 1965, we were focused on segregation and voting rights. Black Lives Matter's focus on police reform and other racist practices pushes reform in a broader sense.

What did you learn in Selma that would be helpful now?

Even though we still carry racist tendencies, I think the country is more open now to having an honest conversation about the problems.

In 1965, when we returned to St. Louis, we were invited to talk to different groups. Some people's reactions were very sad. Some sisters wouldn't talk to us. We received anonymous hate mail, one calling us "jezebels." I learned a lesson from that: History moves slowly, and the earlier civil rights movement is an integral part of what we're experiencing now.

Change moves slowly. [Our actions] proved themselves, but it took a while to be achieved. Black Lives Matter has more comprehensive reforms, but it's early. We have to be patient. It will happen, but it will not happen overnight. Even with Black Lives Matter's media expertise, there's a change of attitudes that will take time.

Having lived this long, I realize it is really hard to forgive and forget, but to hold grudges is not productive. We need to be more tolerant and learn to listen. We must not click off conversations on social media because we don't like what the other person is saying. It is important to listen and reach out in understanding and in a loving way with people's views.

Have we reached a tipping point? Will there be substantive change this time?

I think we are definitely at a tipping point. Definitely. I think our understanding of social justice is growing. For example, being involved in other social movements, I've begun to understand that racial and environmental justice are one and the same thing. It includes housing, education, health and all the social issues that make for a quality of life that has been absent for a lot of brothers and sisters who are minorities. I am encouraged by young people.

What is your advice to young activists in Black Lives Matter?

Learning to listen with both ears. Become more tolerant. Young people and old people can be judgmental. I see many young people that I admire a lot, but they get on social media and sound rather harsh. So, I would say, kindness and listening will go a long way. Don't shut people out if you don't agree with them.

What are your priorities for change? What should happen first?

Environmental change is about justice, social justice. Allowing developers and corporations to insert themselves into poorer neighborhoods has been harmful. They install equipment, oil pipelines, substandard housing, and it affects the quality of life and health for poor people who already have undersupplied schools. Institutional and systemic racism overlap. It's not one size fits all.

I am working on laws and police reforms in the local community. I am working to ban midday traffic stops. In southern California, U.S. Immigration and Customs Enforcement has been embedded within police departments in attempts to arrest illegal immigrants under the guise of traffic stops or drunken-driving checks. That's systemic racism. 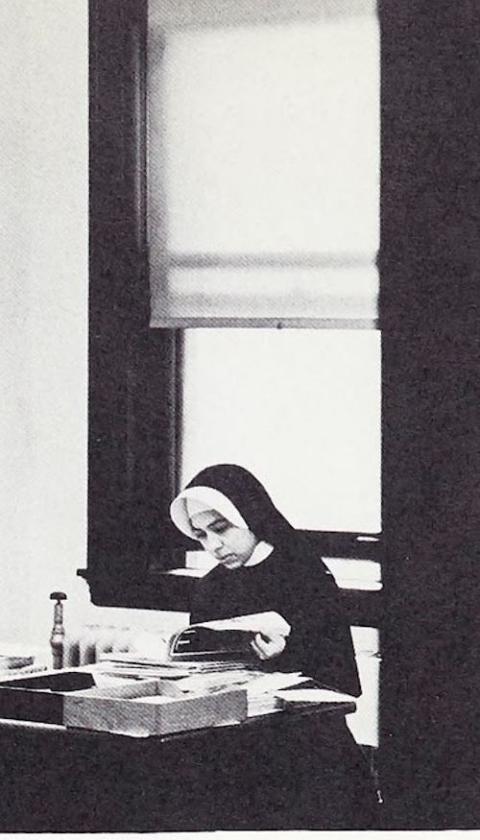 Christine Nava in the 1960s, when she was a Sister of Loretto working at Webster College (Courtesy of the Webster University archives)

What should be the role of religious congregations and the church during this time?

They should lead by example. Unless things have changed a lot with the vow of poverty, a religious person should know the poor are the population they should serve. Working with the poor in education, religious institutions can exert influence in a variety of ways. I believe the church is not doing enough.

I would like to share a book that has made a great impact on my thinking. I keep going back to it this summer. It has been very uplifting and reassuring. It is a difficult book because it challenges my own inner instincts.

The book is by Parker J. Palmer, a Quaker. He has written a number of books, but my favorite is Healing the Heart of Democracy: The Courage to Create a Politics Worthy of the Human Spirit. It is a most wonderful book because it is political, but he ties his ideas to the inner human spirit. It's a spiritual book, really. It is powerful because it combines learning how to deal with difference with what is important in our country. He believes that what's ailing our country can only be healed by healing the heart. This is really something I'd like to encourage others to read.

One of the things besides reading that I want to share has to do with something I've done this summer because of COVID-19 and the quarantines. I decided I would create a nature garden, something beautiful that would attract birds and butterflies — a meditation space. I achieved some success, and I have birds and butterflies to watch. That is healing for the soul.

This story appears in the Sisters of Selma Q&A feature series. View the full series.