Public associations of the faithful reflect an openness to God's call 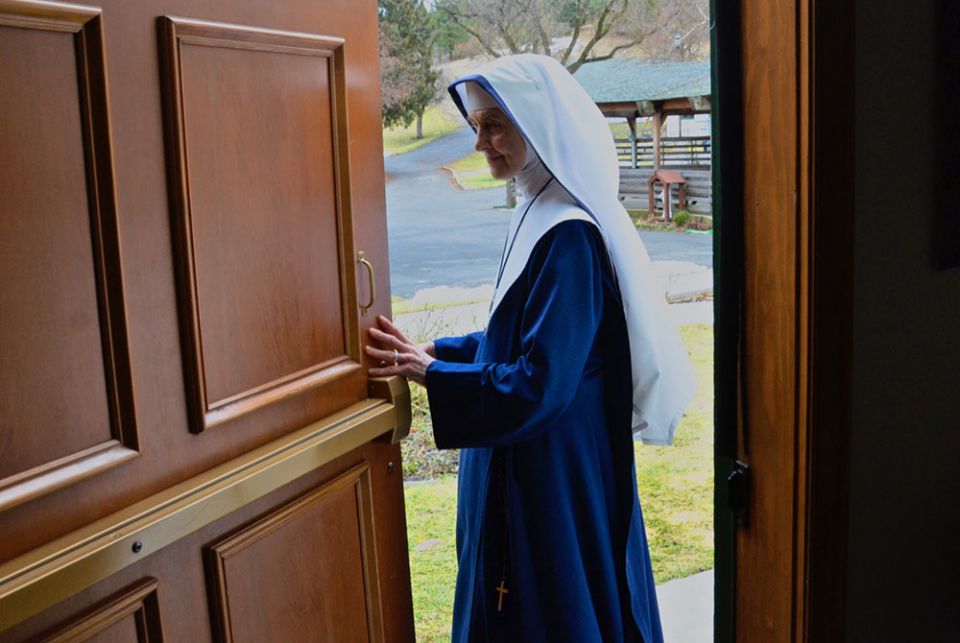 Mother Kathryn Joseph, superior of the Sisters of Mary, Mother of the Church, walks outside Annunciation House, the order's home, on Jan. 29, in Spokane, Washington. (GSR photo / Dan Stockman)

Editor's note: This story is part of a four-part series on religious communities that have been created since 1965, the year the Second Vatican Council ended. The emerging communities come from the third edition of a 2017 directory, "Emerging U.S. Communities of Consecrated Life since Vatican II." This part explores three public associations of the faithful. Read the rest of the series here.

Spokane, Washington — There is nothing but peace at Annunciation House, an immaculate white barn-shaped convent looking out over the Spokane Valley from 135 acres on the foot of Tower Mountain.

That calm is most welcome after the years of heartache and separation that marked the founding of the Sisters of Mary, Mother of the Church.

"The test of a vocation is whether it stands up when it's tested," said Mother Kathryn Joseph, the order's superior. "Sacrifices are part of the package. They don't destroy you; they uplift you."

The community is one of 159 listed in the 2017 directory of emerging communities published by the Center for Applied Research in the Apostolate at Georgetown University, which lists religious communities formed in the United States since the Second Vatican Council. In 2008, it became a public association of the faithful, one of four types of religious groups the Catholic Church recognizes. Public associations can only be formed by a bishop, a conference of bishops or the Holy See, and that authority must approve their statutes. 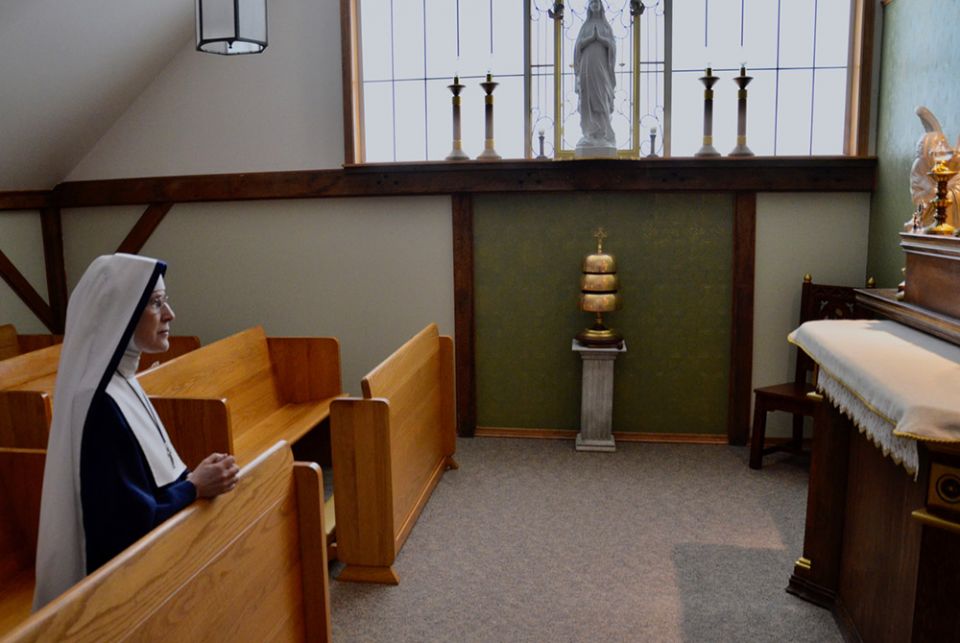 Sr. Maria Consuela prays in the chapel of the Sisters of Mary, Mother of the Church, Jan. 29, in Spokane, Washington. The order is a Public Association of the Faithful founded in 2007 after 15 sisters left a schismatic order nearby. (GSR photo / Dan Stockman)

The sisters had been members of the Religious Congregation of Mary Immaculate Queen, a schismatic order that is part of a sede vacante ("empty chair") movement started in the late 1960s by the since-discredited Francis Schuckardt. Sedevacantists believe the Second Vatican Council was heretical and do not recognize any popes since St. Pope John XXIII.

But around 2000, Mother Kathryn said, seven of the roughly 30 sisters were allowed to make a pilgrimage to Italy to see the Shroud of Turin, where they interacted with other Catholic pilgrims and found that, contrary to what their leaders had been saying, they seemed faithful.

"Catholicism seemed to be seeping up through the cobblestones," she said.

In 2005, the sisters were allowed to watch the televised funeral of St. Pope John Paul II and again found that what they were seeing felt true rather than like heresy.

Mother Kathryn also started listening to Sacred Heart Radio, a Catholic station hosted by an order of Poor Clares in Spokane, and "started hearing things I didn't think they were interested in." The election of Pope Benedict XVI furthered the belief that the Catholic Church may not be in error, after all. 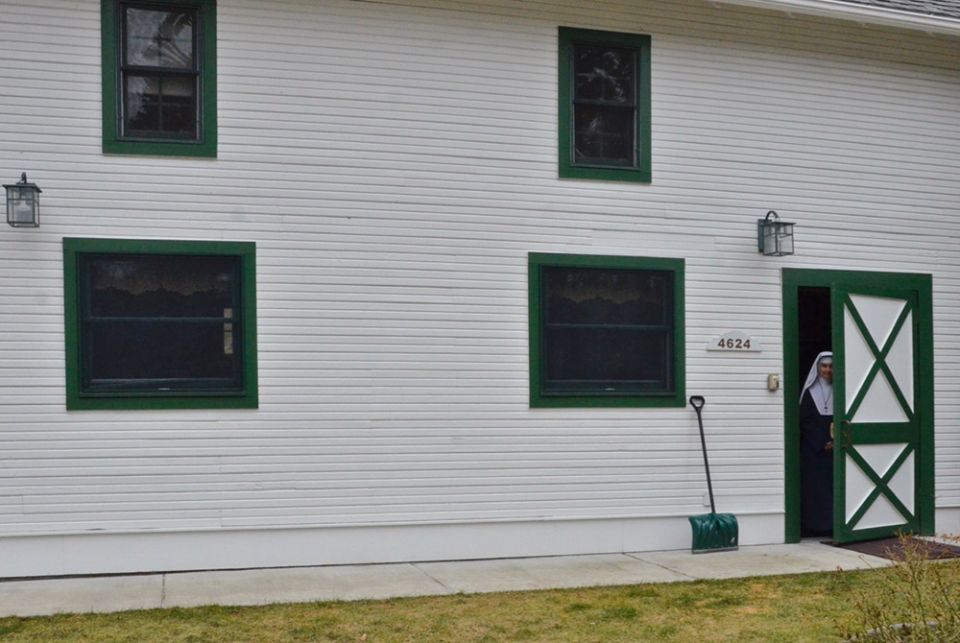 "Around 2006, I had an epiphany, and all of the sudden the church became the church again and the pope was the pope again," she said. Other sisters were coming to the same revelation, and soon, staying became impossible, knowing that they were in error and outside the church.

With the help of Bishop William Skylstad, Spokane's bishop at the time; Jesuit Fr. Robert Spitzer, then president of Gonzaga University; the Missionaries of Charity and others, 15 of the 32 sisters left Mount St. Michael, the Religious Congregation of Mary Immaculate Queen's motherhouse, and moved to a building at the diocesan retreat center. On June 24, 2007, they formed a new order: the Sisters of Mary, Mother of the Church, working mainly in religious education.

"It took tremendous courage to make that decision," Skylstad said in a 2010 video about the community. "From my standpoint, it was a courageous move, and for me, personally — and I think for a lot of people — a very inspiring move."

Since the order formed, 11 of the 15 have moved on: Some to other communities, some out of religious life, and one for health reasons. Three new sisters have joined the order, bringing today's total to seven sisters.

Mother Kathryn said there are no hard feelings, and it is understandable that each woman had to follow her own journey. 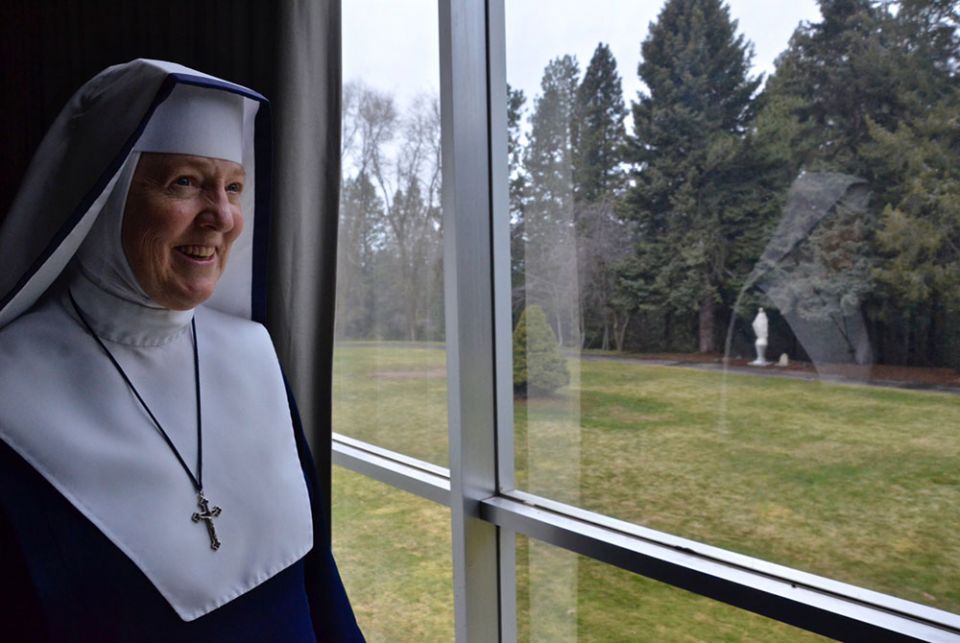 Sr. Mary Eucharista looks over the grounds of the Immaculate Heart Retreat Center Jan. 29, in Spokane, Washington. She is a member of the Sisters of Mary, Mother of the Church, and works at the diocesan-owned retreat center, where she is in charge of scheduling. The center is on the foot of Tower Mountain, and Mary Eucharista said deer often feed outside the windows. (GSR photo / Dan Stockman)

In 2014, the sisters moved from the retreat center to Annunciation House, formerly owned by the Franciscan Sisters of Perpetual Adoration, who years before had converted their barn into an art studio and retreat house.

Today, the barn is home to the sisters and their dog, Jacobi, who not only likes to "pray" with the sisters but has been known to stay through five-hour prayer vigils.

From that original group, Mother Kathryn said, the sisters who remained in religious life went to five other orders with the same charism root.

"It's beautiful that all the people that have come and gone, there's still that connection, and not antagonism," she said. 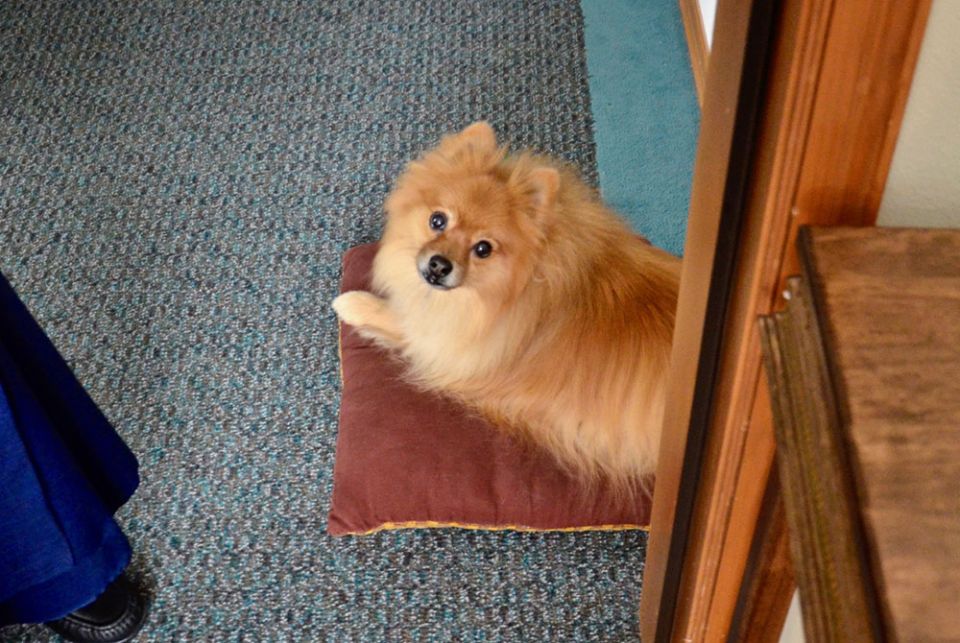 Convent dog Jacobi "prays" on his special prayer pillow outside the chapel of the Sisters of Mary, Mother of the Church in Spokane, Washington. (GSR photo / Dan Stockman)

Serving people who live in poverty

Sr. Mary Elizabeth Gintling joined the Little Sisters of the Poor, whose charism is caring for the elderly, especially those in poverty, in 1943. A public health nurse, Gintling worked in the order's nursing homes but left religious life in 1964 because she wanted to work directly with those made poor "where they were at," said Sr. Marilyn Bouchard, the order's current superior. 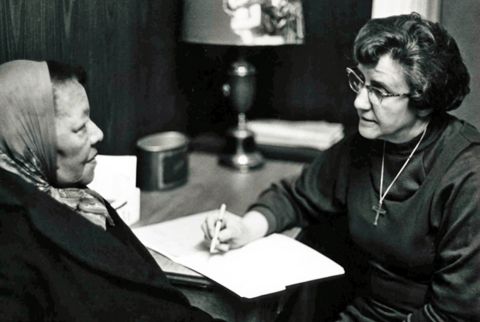 Gintling opened Joseph House in the poorest area of Baltimore, Bouchard said, but Gintling also wanted to continue to live as a vowed religious. Just days after getting permission from the bishop to form a new community in 1974, Gintling and another sister of her as-yet-unnamed new community spent time with the Little Sisters of Jesus, who encouraged them to persevere in the spirituality of Charles de Foucauld. Soon, the new order was formed with its name and habit based on those of the Little Sisters of Jesus and a mission to serve people who live in poverty.

"She just really connected with the Little Sisters of Jesus," Bouchard said. "She loved their spirituality." 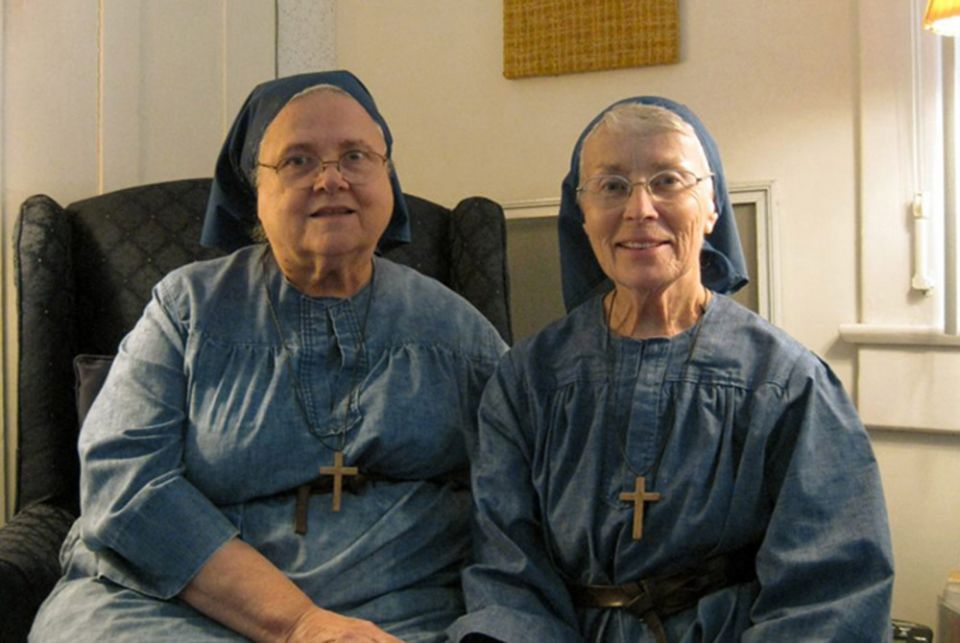 Bouchard was called to the order when she read about Gintling winning the Lumen Christi Award in 1989, especially when the article called her "the Mother Teresa of Salisbury," Maryland, where Gintling had established a convent and moved Joseph House to from Baltimore.

Serving people who live in poverty "had always been a draw for me, ever since grade school," Bouchard said. "But I was a shy person, and I didn't think I had the wherewithal to give anything to anybody."

Today, the seven sisters run Joseph House, which features a crisis center, where those trapped in poverty can get a hot lunch, financial assistance for medicine or utilities, and other services. The Village of Hope provides shelter and training for homeless women and their children, while the Joseph House Workshop provides transitional living for men who are unemployed or hard to employ because of chronic unemployment or educational deficits.

"We have a lot of things going on for this little group," Bouchard said. 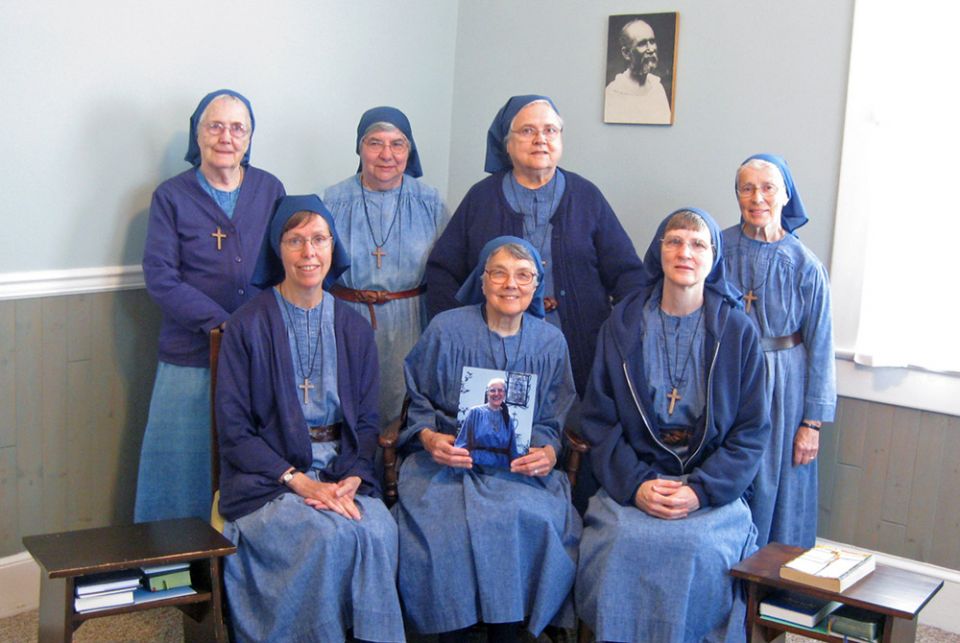 Just as Gintling was open to God's direction, the 27 members of A New Genesis in Oshkosh, Wisconsin, say they are called to "a radical openness to the Spirit."

That radical openness has created a radically different religious community based on the renewal Vatican II called for.

"It was a call felt by several sisters to look for a more contemporary way of living religious life," Sr. Diane Baumann said. "The founders really wanted it to be a Vatican II community, which means it's based on ideas like: the sacred is found in the ordinary, that God's revelation comes to us in our life experiences, and decisions should be made in partnership with others." 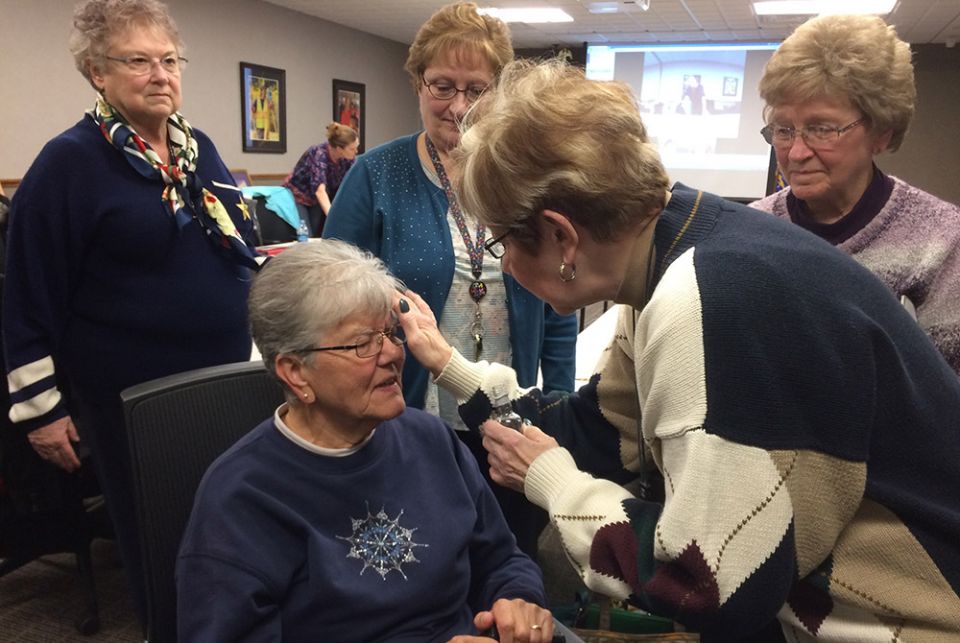 A New Genesis Sr. Carol Burns anoints Mary Barbieur with holy oil. With them are, from left, Carol Haanen, Therese Izzo Nemec and Carmelyn Gentrup. (Courtesy of A New Genesis)

Sisters can be married or single, do not live in community, and must be financially independent.

"We have to find our own ministry position, our own housing, and have to save for our future," Baumann said. "We have to take care of all our own financial needs. We feel that's a real way of living the vow of poverty because there's no one taking care of us."

In the mid-1990s, they started an associates program, but a few years ago did away with different tiers of membership. Now, there are sisters, married people and single people, all of whom are equal but take different vows.

"We only have one category, which reflects our universal call to holiness and discipleship," Baumann said.

That universal call leads them to believe that the principles of the community show the way toward a new form of religious life: Of the 21 sisters, 19 came from seven different religious communities. Baumann left the Franciscan Sisters of Christian Charity and joined A New Genesis in 1995.

Though their community may look different than others, it is the same in its embrace of Scripture and prayer life.

"Our daily life experience reflects what the Spirit is asking us to do. ... We're living the life," she said. "That's the core of the vision and the energy that started the community and continues to this day."

Click the left and right arrows to scroll through infographics on each public assocation, based on data from the Center for Applied Research in the Apostolate at Georgetown University (GSR graphics / Pam Hackenmiller)

Read this next: 'Our first work is prayer': the life of contemplative religious institutes

Puzzlements on human nature in the convent