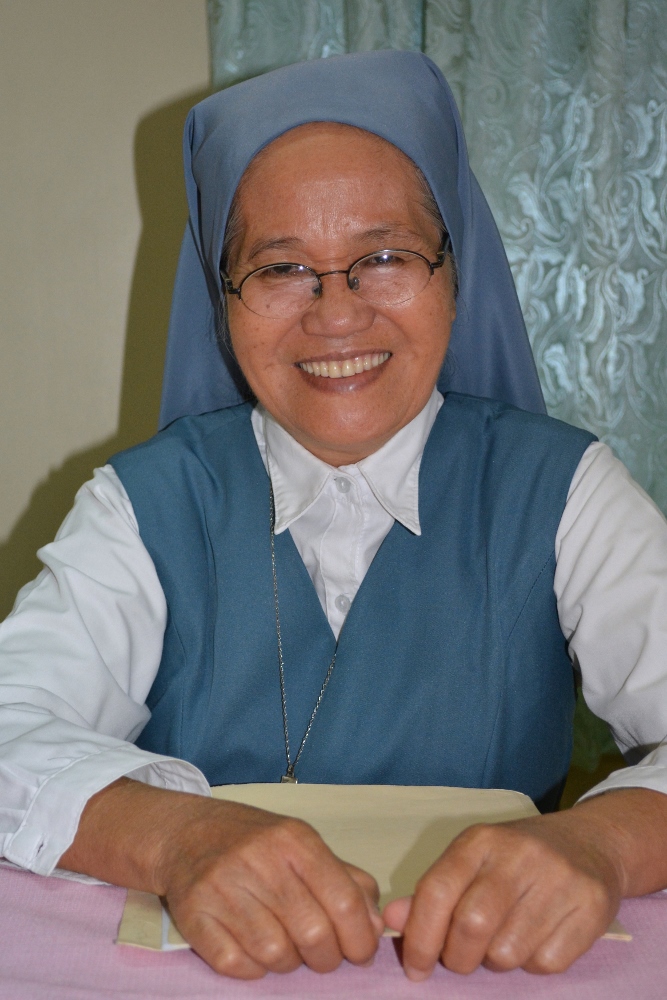 Sr. Porferia Ocariza, a member of the Daughters of St. Paul, poses for a photo Feb. 19 in Pasay City, Philippines. Sister Ocariza helped lead the rosary during the People Power uprising in the Philippines 30 years ago to oust dictator Ferdinand Marcos. (CNS photo / Simone Orendain)

Manila, Philippines — Religious and clergy in the Philippines say their experiences in the People Power Revolution 30 years ago have had a lasting impact on their faith and vocations.

Sr. Porferia "Pingping" Ocariza, a member of the Daughters of St. Paul, told Catholic News Service that what she did Feb. 23, 1986, was worth it.

"Because for me at that time when we were facing the tanks, I believed heavily that God was there," she told CNS. "God was there as if the seed [of democracy] was being planted."

A three-week protest that saw millions of Filipinos converge on a main thoroughfare just outside the country's military headquarters toppled Ferdinand Marcos, who had been in power for more than 15 years. Marcos had ordered his military to disperse angry crowds that claimed he stole a snap election from Corazon Aquino.

Standing in pairs, Ocariza and 16 other nuns led the rosary as soldiers escorted rolling military tanks with their turrets trained on the sisters. The nun said staring down those tanks has been the scariest experience of her life.

"I said, 'Lord forgive me for all my sins and even the offenses of our Filipino people.' If really the tanks would crush us, at least the two of us . . . kill us sisters, not the people because we [did not] want bloodshed. I love my country."

But the tanks stopped. And the soldiers joined the protesters reciting the rosary.

Ocariza said she believed that God heard their prayers and saved the country from what could have been a violent, bloody uprising. She said she looks back to that time as a source of courage and a reminder to press ahead to fight for what is right. Today, she continues to press for housing for the poor in metro Manila.

Ocariza, along with droves of clergy and religious, joined the 1986 protests after a message broadcast from then-Cardinal Jaime Sin of Manila.

Fr. Larry Faraon, a former Dominican, was station administrator for Radio Veritas, which at the time was one of a handful of broadcasters not controlled by the government.

Cardinal Sin "only called up once," Father Faraon told CNS. "But then it was my decision to replay it . . . every 10 minutes."

The cardinal had implored citizens of the overwhelmingly Catholic country to pray and especially go and support the rebel forces led by then-defense minister Juan Ponce Enrile and Gen. Fidel Ramos, who both turned against Marcos and sided with the Aquino camp.

Fr. Anton Pascual, current president of Radio Veritas, said the Marcos regime was "aware of the church's moral ascendancy. He [Marcos] knew how to play politics with the church" and that the church was very powerful whenever it "would flex her muscle." But Pascual, who was a 25-year-old seminarian assigned to help monitor the vote counting, said Marcos retaliated against the station over the message of Cardinal Sin.

Faraon said that, during the turmoil following the snap elections, the Marcos military brought down the Radio Veritas transmitter in Bulacan province, just north of metro Manila. He said he learned from rebel troops guarding the station's only temporary transmitter in Quezon City that their antenna was in danger of being razed. 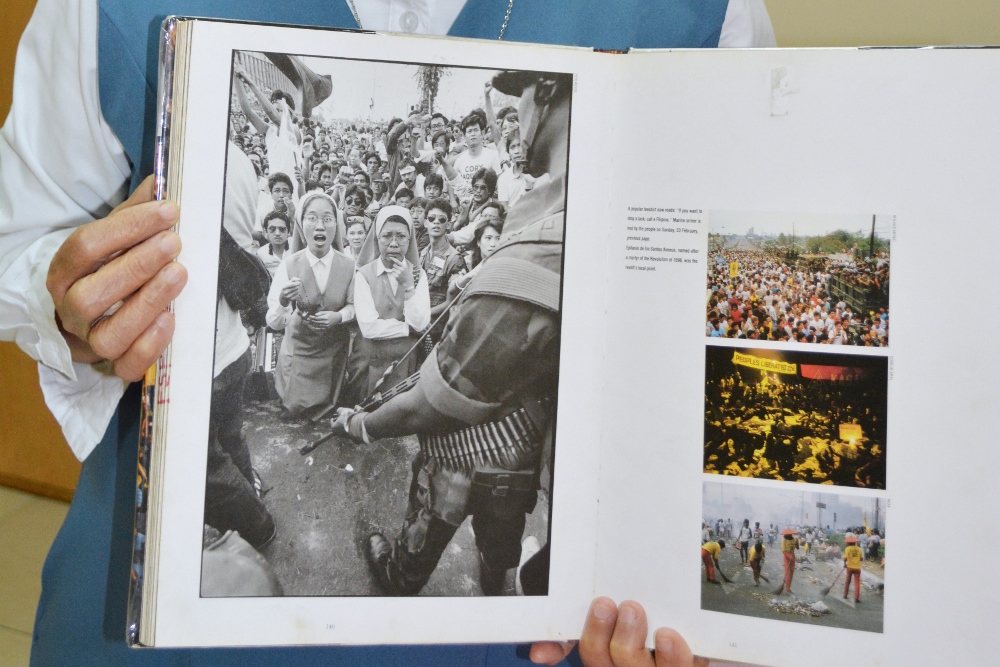 Sr. Porferia Ocariza, a member of the Daughters of St. Paul, holds a book on the People Power uprising in the Philippines 30 years ago to oust dictator Ferdinand Marcos. She is still recognized today for her stunned expression, left image, as military tanks approached. (CNS photo / Simone Orendain)

Faraon had to decide whether to close the station. With just little more than a year in the priesthood, he called it "a defining moment" in his vocation.

He said, "I really had to make a choice between being a martyr or just living it off and returning to my convent and telling everybody, 'Well, that's all for you. That's not for me.'"

But his staff said they wanted to see the work through.

"All of a sudden I felt there was a very, very strong call . . . to answer right now. . . . I used to receive a proposal and study [it] and then make a decision, but that was a time that I really had to make a decision, right now . . . a 'matter of life and death' decision. Somehow it helped me. It transformed me. I learned so much . . . from that personal experience," said Faraon.

The cost of being here

In a year of darkness and uncertainty, we are a people of hope

Jesus and women: 'You are set free'