by The Life Panelists

This month illustrates the almost infinite variations in the organizational relationships one congregation can have with others. The uniqueness of congregations makes a difference in their history, ministries or plans for the future — whether helpful or complicated. The questions for the panelists were:

How unique is your congregation? Is it the only one like it in the world, or do you share a charism or a founder with another group of sisters? Has it made a difference, and do you have a special way of collaborating with them?

Joeyanna D'Souza is a member of the Congregation of the Daughters of St. Paul in India. She has worked with Pauline Press in editing and has authored six books. Presently, she is marketing manager of Pauline Publications & Communications, India.

My religious community, the Congregation of the Daughters of St. Paul, and the Society of St. Paul, carry out a new form of evangelization that lives and witnesses to the faith through communications across all forms of media.

We are unique in the ways we follow the advice of our founder, Blessed James Alberione, as he described the mission of St. Paul. He would use the greatest "pulpits" fashioned by modern progress — the press, cinema, radio, television — the greatest discoveries to transmit the doctrine of love and salvation, the Gospel of Jesus Christ.

Working with other religious institutions in the field of communications has been an experience of sharing and, to some extent, competition. Healthy competition! There is always a lurking desire to do better than they, and though we are all working in the vineyard of the Lord, there is the human weakness of wanting to excel and win the hearts of people in the field.

Other groups that share our charism of bringing the Gospel by means of communication are the Salesians and, more recently, the Jesuits, who have begun to establish communication centers. (Previously, they concentrated on youth centers, educational institutions and grassroots-level works.)

Sharing resources has been the best advantage of collaborating with other communities as well as networking at meetings and seminars on related topics.

The international group of Catholic communicators, SIGNIS, remains the platform for networking of Catholic media professionals, both individuals and institutions.

And now with the Vatican signaling the closing of UCIP (Union Catholique Internationale de la Presse, or the International Catholic Union of the Press) there is strong possibility that they will merge with SIGNIS.

Networking gives us the ability to share ideas and legally use such things as the soundtracks and video shots from another organization or party in one's own productions or channels. We invite personnel from across the country for seminars and panel discussions for our programs for youth, teachers, students and catechists. We like to keep our collaboration on a friendly level and remain professional to the required extent!

Regi Joseph is a Presentation of the Blessed Virgin Mary sister in India. She is a teacher in the state of Jammu and Kashmir in northern India. She has worked in education in city and rural areas.

I believe every congregation is unique, as each founder or foundress is or was inspired by the signs of the times to respond to a specific situation. Nano Nagle, the foundress of the Presentation Sisters, was moved by the plight of the poor Catholic population in Ireland in the 18th century as they reeled under the draconian Penal Laws, which denied them every possible right — including the right to practice their religion and the right to education.

It was at great personal risk that Nano Nagle began her schools for the education of poor Catholics. She wanted to liberate them from ignorance and poverty and the degradation into which they had been immersed by unjust social and political structures.

Nano's last words to the small community that gathered around her death bed were, "Love one another and spend yourselves for the poor."

It is this message that the Presentation Sisters strive to live out as we engage ourselves in varied ministries across the globe to be the human face of God and the compassionate presence of Jesus wherever we are. Education and care of the vulnerable and powerless is our prime focus.

Despite the dwindling numbers in membership, we respond whenever and wherever the need calls, even venturing into unknown territories. We work to ensure that the dignity of people is respected and their rights are upheld by engaging in compassionate service.

Though we do not directly share a charism with one particular group of religious sisters, collaboration with like-minded people is very much a part of us. We collaborate with different dioceses and nongovernmental organizations. We also have Friends Of Nano Movement and Lay Associate Movement, who join hands with us in furthering the reign of God in these challenging times.

We have also formed a network of Presentation Sisters around the world, called the International Presentation Association, to foster unity and enable collaborations for the sake of mission.

Our mission is to speak and act in partnership with others for global justice from a contemplative stance in a spirit of oneness with the whole of creation.

The International Presentation Association assembly takes place once every five years, and the deliberations made there are carried out in our ministries across the globe.

Karan Varker is a Sister of Charity of Australia. She has been a teacher, principal and teacher-trainer working in Papua New Guinea, America Samoa, Australia and the Solomon Islands. Her present ministry is in nurturing the spirituality of teachers.

The Sisters of Charity of Australia are unique in the sense that we were the first Catholic women religious in Australia. After over four months at sea, five sisters from Ireland arrived in Sydney in 1838, when Australia was still very much a convict colony. Because of distance and difficulties in communication, our founder, Mary Aikenhead, advised us to set up our own congregational governance here, which is still the case today.

Our sisters in Ireland later began missions in England, Scotland, the United States, Zambia, Nigeria and Malawi. The congregational governance of all of these is presently still from Ireland. Many of our Australian sisters have spent time or ministered with our sisters in these countries.

We have collaborated here with the Sisters of Mercy in some areas of nursing. When the Missionaries of Charity first arrived in Melbourne, we helped them get established there. In Samoa, I was grateful to the Little Sisters of the Poor, who offered me wonderful hospitality.

In 2015, for the occasion of our 200-year anniversary of our founding in Ireland, Pope Francis declared Mary Aikenhead "venerable." I compiled a book (The Love of Christ Impels Us to the Ends of the Earth) recounting missionary journeys of our Australian sisters, including that first one from Ireland, to this Great Southern Land.

After we had served the Australian people for over 100 years, in 1957, we also began ministering in Papua New Guinea, Asia, Central America, southeast Europe, Africa and Oceania.

Our overseas missionary journeys took our sisters into challenging and sometimes dangerous situations, places of social upheaval and civil war like Rwanda, Cambodia, Bougainville, Vietnam and South Sudan. The lives of sisters were, at times, on the line as they faced dangerous armed rebels, buried children, ministered in refugee camps, suffered malaria and dengue fever, experienced fierce cyclones and earthquakes, and ministered to the suffering poor.

In many countries where we once served, native congregations are springing up. Here in Australia, as our aging congregation faces an uncertain future, we trust in Divine Providence (as Mary Aikenhead would) that the needs of the poor will continue to be met in creative and emerging ways by those who are impelled by the love of Christ.

When I was in vocation ministry, I was often asked, "What makes Dominican Sisters different from other sisters? You are involved in similar ministries." I would answer that we, Dominican Sisters of San Rafael, engage in these ministries through the lens of our charism.

Other congregations have different charisms: the corporal works of mercy, concern for the poor. For Dominicans, it is the charism of preaching that engages us and the hallmark of joy that enlivens us. The earliest Dominicans were known as "joyful friars." Dominican St. Thomas of Aquinas told us to contemplate and give to others the fruit of that contemplation.

Thomas' words are what drew me when I was discerning my vocation. Certainly, sisters from other congregations share in the ministry of preaching, but they can notice that there is something identifiable about a Dominican nurse, for example.

In fact, sometimes sisters from other congregations notice what is special about our charism more quickly than we do. That's good news that a charism — gift — can be spotted!

Our efforts in collaboration have brought this into clearer focus. Sisters pray, study and work together in our dioceses and in national organizations like the Leadership Conference of Women Religious, the National Religious Vocation Conference, and Network, to name a few. We learn what we share and, over the years since the Second Vatican Council, have lost our sense of competitiveness, seeing that what we share is greater than any differences in perspective.

A recent comment in a Zoom meeting challenged me to look at my quote differently. "To contemplate and to give to others." Hmm. That's the gift that I have, what I can give to someone else who doesn't have it. Where is mutuality?

In looking up the Latin word for "give" in the quotation, I learned that it also means "to relate." A relationship depends upon the communion in communication. All sisters, regardless of our particular charism, share in all the gifts of preaching, hospitality, truth, unity, zeal, joy ...

So there is now a freshness in this question of charism for me. I begin to see all our charisms as much more than "lenses." Rather, we hold a many-faceted jewel that we can contemplate as the light of the Spirit illumines the different facets.

And did you ever notice how facets change in appearance as light reaches them from different directions? You might even say they dance! 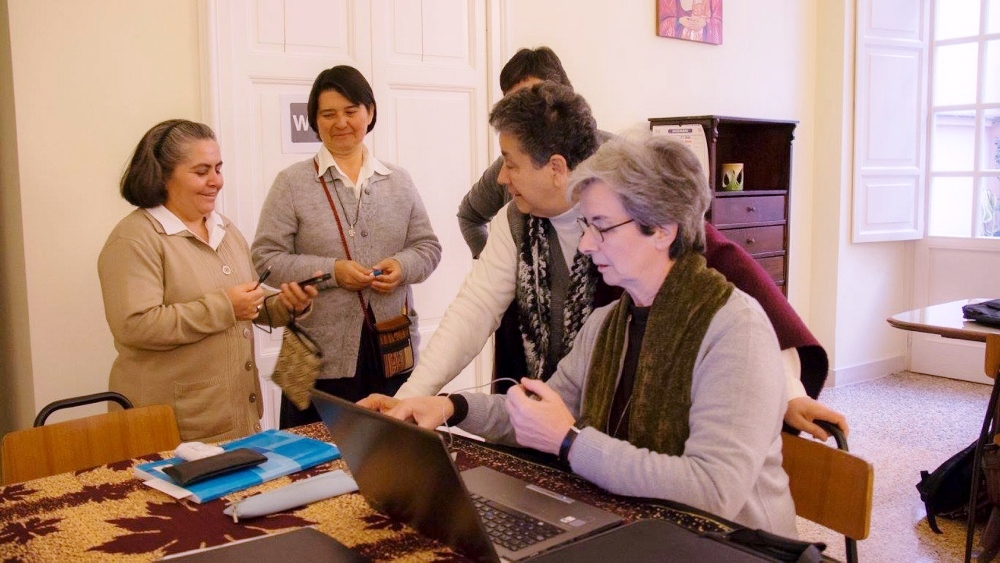 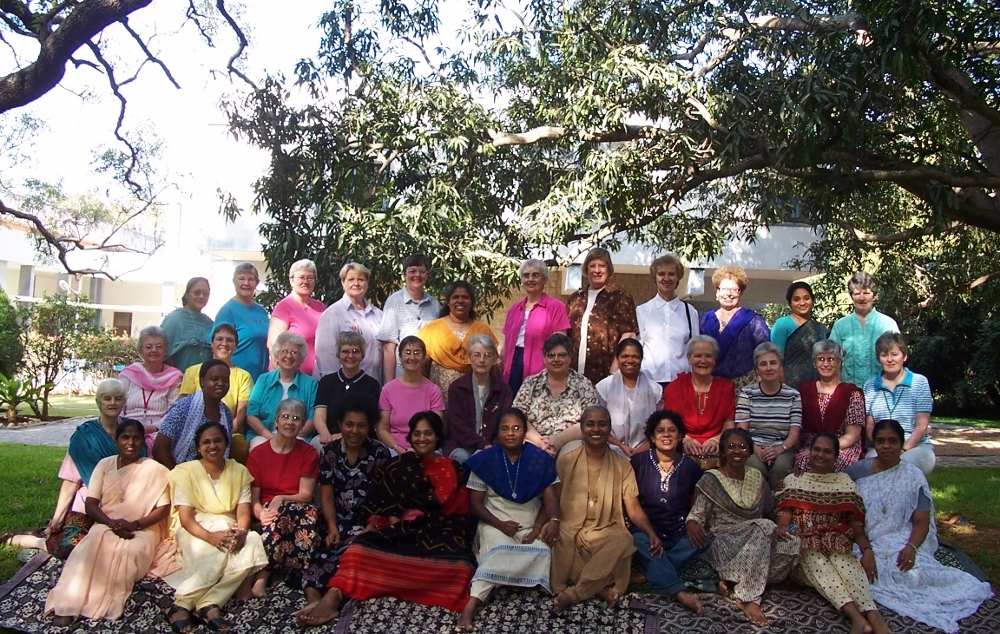 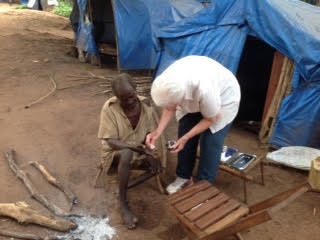