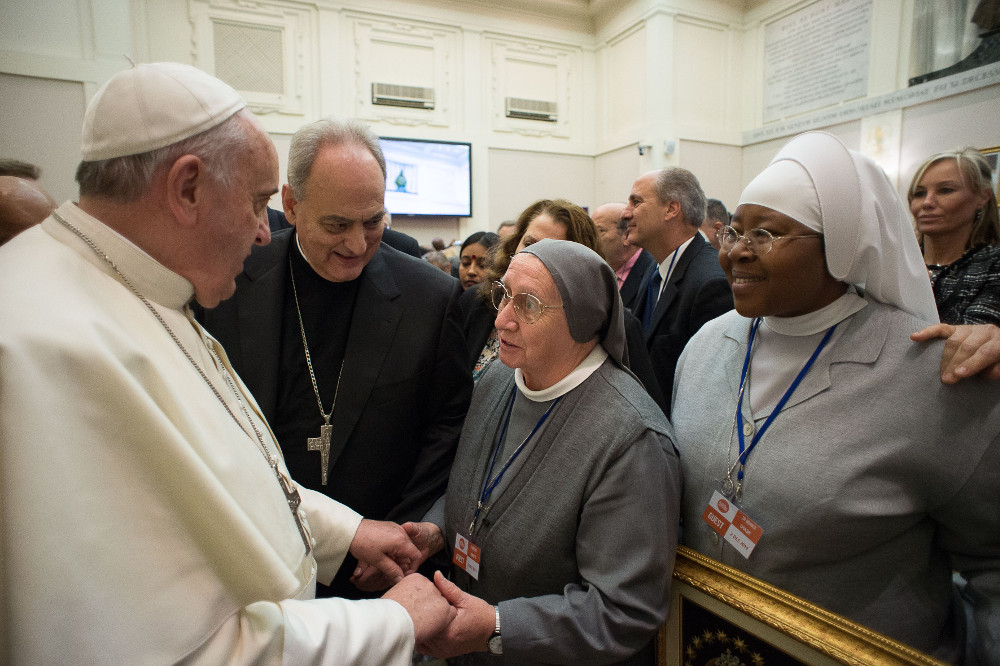 Vatican City — Pope Francis has asked an Italian nun, who has been on the frontlines in the fight against human trafficking, to write this year's Way of the Cross meditations.

Gisotti said, "The suffering of many people who are victims of human trafficking will be the central theme of the meditations," which are meant to help participants walk in Christ's footsteps and reflect on today's sins and sufferings, and how Christians should respond.

Each year, the pope asks a different person to write the commentary and prayers.

Bonetti is a leader among religious women working against human trafficking. She started and led anti-trafficking initiatives for the Italian Union of Major Superiors and helped educate officials in Italy and the United States about the problem.

The Italian religious superiors' anti-trafficking office she set up trains and connects religious congregations and other people around the world to provide victim support and services as well as prevent trafficking by helping people in their home countries who are vulnerable to being trafficked.

She was honored by the U.S. Department of State in 2004 with its "Trafficking in Persons Hero Award" for her work, and in 2007 she was given the State Department's "Woman of Courage" award for helping "create transformative change" and setting "a positive example for emerging women leaders worldwide." In 2014, she received Italy's highest honor when Italian President Giorgio Napolitano bestowed on her the Order of Merit.

Currently, Bonetti is president of the Italian association Slaves No More, which focuses on helping rebuild the lives of women and children forced into the sex trade and those who are victims of other forms of abuse, violence and discrimination.

In 2013, she asked Pope Francis to help raise greater awareness in the church about the problem of human trafficking by establishing a worldwide day of prayer and fasting.

"The pope was very interested in our suggestion and asked us what date we would like the day to be," Bonetti told Catholic News Service at the time. She said they told him to make it Feb. 8 — the feast day of St. Josephine Bakhita, a Sudanese slave who found freedom in Italy and became a nun in the late 19th century.

The next year, Pope Francis asked the international unions of superiors general of men's and women's religious orders to promote the initiative. The International Day of Prayer and Awareness Against Human Trafficking was first celebrated Feb. 8, 2015.

When talking in 2014 about her two decades of fighting trafficking, Bonetti said the only way to help victims or people at risk is to go to them and make "direct contact," which is why she and her community hit the streets of Rome late at night and speak to foreign women who have been trafficked into prostitution.

"We tell them there is an alternative" and that they can be free, she said.

"We enter into communion with them, without judgment, without condemning them, trying to really understand their situation and lend a hand," she said.

Human trafficking: A ripple effect in a sea of exploitation