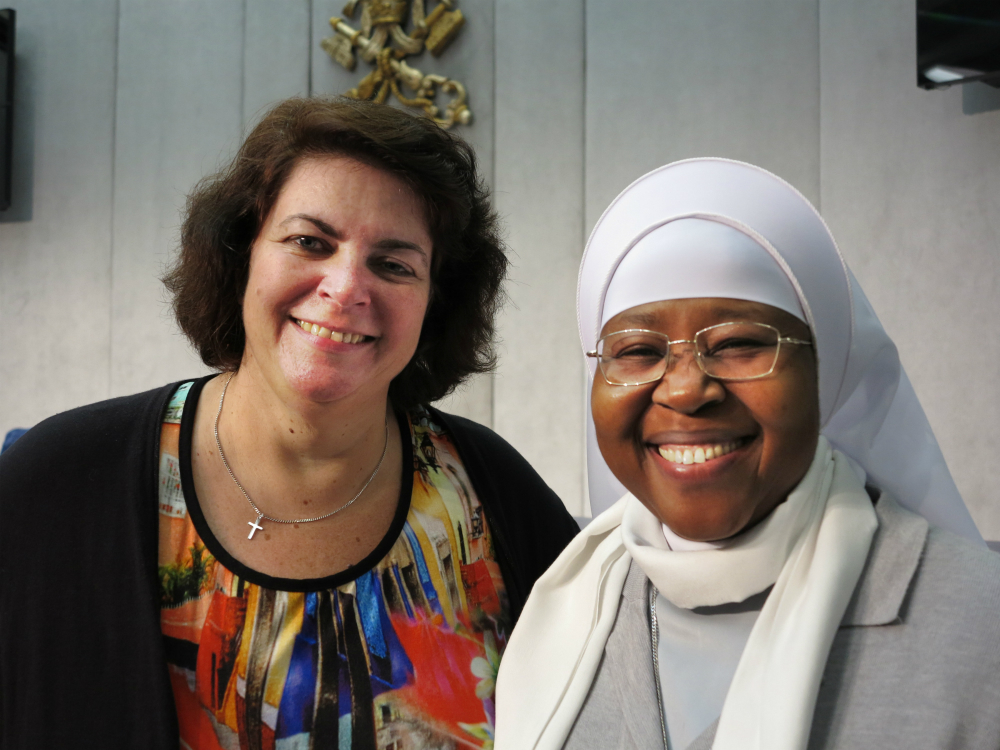 Ivonne van de Kar, an anti-trafficking advocate from the Netherlands, is seen at the Vatican press hall with Sister Monica Chikwe, a member of the Hospitaler Sisters of Mercy, who works with trafficked Nigerian women, Nov. 4. (CNS photo / Carol Glatz)

Vatican City — Women religious are often the first people to discover problems emerging in society because they work directly with so many people in need, an anti-trafficking advocate said.

However, because religious focus more on providing assistance than publicizing their efforts, the rest of the world is often slower to catch on to where there is trouble, said Ivonne van de Kar, the coordinator of the Foundation of Religious Against Trafficking of Women in the Netherlands.

Women religious in the Netherlands, for example, "had started to work with women in prostitution when there was absolutely no attention (given to) them," and they provided a safe space for women to rest and chat, she told Catholic News Service November 4.

Offering coffee and a listening ear, the women religious were finding out as early as 1981 that some women were being forced into the sex trade and that marked the beginning of the sisters' work against trafficking. The religious quickly involved the police and later some other organizations, including van de Kar's in the early 1990s.

"Very often it's the sisters who discover a problem because they work with the people and they see what is happening on the streets and are there for them," she said.

But speaking up more about their work is "one of the things I always tell them," so they can widen the scope of awareness and the response to so many problems, she said.

"We help the sisters do more with PR, to make people aware of the fantastic work that has been done," she said, adding that the pope recognizing and thanking women religious for their anti-trafficking work was also encouraging and very helpful.

But, van de Kar noted that the sharply decreasing number of women religious in the Netherlands will be a blow to the critical work they carry out.

"It's very difficult for a layperson to follow in the footsteps of a religious sister," primarily because laypeople need a competitive salary to make ends meet, so the cost of filling vacancies left by consecrated women and men could be prohibitive, she said. Religious congregations, on the other hand, are able to assign and support their members wherever they are needed, she said.

Helping to expand the influence and impact of women religious is the network RENATE — Religious in Europe Networking Against Trafficking and Exploitation — which was founded in 2009. Network members, including van de Kar, were meeting in Rome November 6-12. They were scheduled to have an audience with Pope Francis at the Vatican Nov. 7.

The meeting will look at ways everyone in society and the church can do something to prevent and end human trafficking, she said.

They are hoping to involve more clergy in global efforts, she said, by getting seminaries and ongoing formation programs to include specific courses on how to recognize abuse, exploitation and trafficking, and on what to do with suspicions.

"Your eyes have to be opened to see it. If you never heard of it, you can't see it," she said, but once the problem is explained, "all of a sudden you can see it everywhere."

The church also needs to establish or strengthen collaboration with state or local police because "they find the victims" during the course of their work, van de Kar said, and those victims need the kind of help the church can provide.

Getting consumers to stop expecting cheap products and services is also key, she said.

"We as consumers are a big group and can do something about trafficking" by paying for products and services that do not involve exploitation, she said.

Forced labor is growing in many sectors, she said, including the garment industry, seaports, nail salons and even "forced begging" on the streets.

Forced labor is still a fundamental part of the sex trade, said Hospitaler Sisters of Mercy Monica Chikwe, who works with trafficked Nigerian women in Italy. She told CNS that as long as demand remains high, traffickers will just replace the women that the sisters rescue with new recruits.

While it's necessary to get laws passed that prosecute traffickers, they are also trying to "appeal to the conscience of many men because this is what is perpetrating this problem," said Chikwe. "If the demand is not there, traffickers will stop, so it's good to tackle the problem from the root cause."

The church can spread the word with Mass homilies and school programs, including sexual education, she said. Families, too, need to speak up and teach their children very early "that the body of a lady is not a toy."

When kids grow in understanding and they see in their own family that every person's body is to be shown respect, including one's own, "that will help society" and the family, she said.

A Cry for Life: Trafficking and Brazil