Above ground, the sun-drenched terraces of the Ecce Homo Centre for Biblical Formation provide a breathtaking panorama of Jerusalem's Old City. The Dome of the Rock Sanctuary glints in the sun, church spires stretch for the sky, and the white stone buildings hug the contours of the land.

Below ground, the views are no less impressive: a subterranean world dating back to just after the time of Jesus. The building holds an ancient cistern, which probably provided water to the Temple Mount, and an old market street from almost 2,000 years ago. Just outside the convent is the Hadrian arch, built in 135 and believed to be the place mentioned in John 19:5 — "So Jesus came out, wearing the crown of thorns and the purple cloak. And [Pilate] said to them 'Behold, the man!' "

Named for its location, the Ecce Homo institute occupies a unique space in Catholic Bible study — teaching Catholic texts from a Jewish perspective and emphasizing the importance of interreligious dialogue and appreciation for the Jewish roots of Christianity.

Just as the main Ecce Homo building is made up of different layers above and below ground, the Notre Dame de Sion sisters who run the institute have an intricate and layered history with Judaism. Theirs is a dramatic journey that started with praying for conversion of Jews and eventually transformed into one of the leading voices within the church advocating for acceptance and cooperation with Jewish communities.

"We were founded by a Jewish person," explained Sr. Margaret Zdunich, the director of the Centre for Biblical Formation. Théodor Ratisbonne was part of a large family of French Jewish bankers. In 1827, he converted to Catholicism, followed by his brother Alphonse in 1842. Together, they founded the Congregation of Notre Dame de Sion in 1843 and the Fathers of Sion in 1852. Prior to their conversion, both brothers had been involved in social work within the Jewish community. After their conversion, the brothers wanted to continue helping the Jews — and they felt the best way to help them was conversion.

"When we started, the 'in' thing of the day was for people to convert," said Zdunich. "Théodor felt Jews needed to accept Jesus to come to God," she said. "He forbid proselytizing, so we couldn't be active about converting Jews, but we could pray for it. … We had terrible prayers in our liturgy that were very condescending to Jews."

"The church's evangelization was that the ultimate goal was for everyone to be Catholic," Zdunich added.

Notre Dame de Sion sisters were also complicit in a controversial policy of the Catholic Church in Europe after the Holocaust. The church directed its members not to return Jewish children to their families after the war if they had been baptized in order to save them from Nazis. "Children who have been baptized must not be entrusted to institutions that would not be in a position to guarantee their Christian upbringing," a Vatican letter from 1946 stated.

At the center of the controversy on the subject were two French Jewish boys, Gerald and Robert Finaly, whose parents had sent them to a Catholic nursery in 1944, before the parents were deported to Auschwitz and killed. Their French Catholic nanny secretly baptized the children, and Notre Dame de Sion sisters and some priests eventually helped smuggle the children to Spain in 1953 in an effort to avoid giving the children to their Jewish relatives. Police arrested the superior, Mother Antonine, as well as several other sisters and priests who were involved in the kidnapping. The Finaly children were reunited with their family after an eight-year court battle.

For the Sisters of Sion, that arrest was a turning point. Mother Marie-Félix, who was the superior general during the Finaly Affair, wanted to take a new direction. "The superior general at the time said, 'Something is wrong. We need to examine why we're doing this, why we have this attitude towards Jews,' " said Zdunich. "We were obedient to the church, but we started advocating for change. We ourselves were not squeaky clean."

Just after the Sion sisters began looking inward and to start the process of changing their direction, the Catholic Church also began undergoing a massive transformation with Vatican II.

Although women were not permitted on the Vatican II Council, Notre Dame de Sion sisters were instrumental in advocating for better Jewish-Catholic relations in the documents.

In 1965, Pope Paul VI published Nostra Aetate, "In Our Time," about the Catholic Church's new relationship with non-Christian religions. The document condemned anti-Semitism, recognized the kinship between Christians and Jews, and, perhaps most importantly, renounced the idea of deicide, or "god-killing," in this case that contemporary Jews are responsible for the murder of Jesus.

The document states: "What happened in Jesus' passion cannot be blamed upon all the Jews then living, without distinction, nor upon all Jews of today. As the Church has always held and continues to hold, Christ in his boundless love freely underwent His passion and death because of the sins of all, so that all might attain salvation."

How to love your neighbor

Completely changing the interpretation of the Notre Dame de Sion charism was not an overnight process. The congregation took a three-step approach, Zdunich explained. First, they worked on their own relationships with the Jewish communities surrounding their congregations, reaching out to Jewish leaders and trying to build bridges on an interpersonal level. Next, they started formal Jewish-Christian dialogue and lectures at their congregations and centers around the world. They invited Jewish leaders to come and give talks in an effort to educate their communities about Judaism's traditions and culture.

Lastly, the Notre Dame de Sion sisters began adapting their Bible study to take an academic approach to learning Jewish texts. That included sending sisters, in habits, to study at places like the Leo Baeck College in London, a Jewish progressive rabbinical school.

In 1984, a Dominican priest and a Sister of St. Joseph* opened a French Bible formation institute in Jerusalem, which eventually moved to the Notre Dame de Sion building in the Muslim Quarter of the Old City. The building incorporates the "Ecce Homo arch," built by Emperor Hadrian at the Second Station on Via Dolorosa.

Around the same time, Notre Dame de Sion Sr. Maureena Fritz helped found Bat Kol, another Christian study program in Jerusalem, but one that focuses almost exclusively on teaching Jewish texts to Christians. Like Ecce Homo, Bat Kol runs intensive, short-term study programs, but often focusing on the Old Testament from Jewish sources, rather than a combination of both Jewish and Christian sources.

Today, the Ecce Homo formation center runs study programs focusing on common holiday themes like "Passover and Easter," or the Jewish holiday feast period in the fall. Other courses delve into the lives of biblical figures such as those in the Gospels of John and Luke to understand how being Jewish affected their lives.**

"For Holy week we focused on John's texts, but these can be difficult because there's a lot of references to 'the Jews' and the things they did [to Jesus]," said Zdunich. "So what does that mean? We need to unpack that."

"We look at how this created anti-Semitism with the idea that Jews killed Jesus," explained Patricia O'Reilly, the director of program development at the Ecce Homo center. Sessions on Luke and Paul explore how outside influences, including early Jewish and Roman culture, affected the narratives of the Gospel and how people interpret these biblical figures today.

The center is working on a classroom model that could start next year to have a Jewish professor and a Christian professor teach the same text, to highlight the differences and similarities each religion can uncover in the same words. Many of the professors teaching the Bible courses at the center are Jewish.

"When we read the Old Testament, we say, 'This is a community's relationship with its God,' so what does that mean for us today?" asked Sr. Celia Martin, the executive assistant at Ecce Homo and a leader at the congregation's international novitiate located on the outskirts of Jerusalem. "We can't understand the Second Testament unless we go back, dig into, and have a good understanding of the [First Testament] Scripture from a Jewish perspective," she said.

Martin compared the growing tolerance and acceptance of Jewish perspectives of Catholic texts to a growing emphasis on interculturality in the church, a process of accepting and celebrating different stories that create a more international and vibrant church.

"Religious orders particularly are trying to grapple with the whole understanding around interculturality," she said. In the same way women religious are often the first voices advocating for diversity within the church, the Notre Dame de Sion sisters are advocating for a diversity of perspectives in Scripture study.

"A few years ago I did a course on Leviticus*** at Bat Kol, and all the teachers except two were Jewish," said Martin. "Some Christians might say Leviticus is about purity laws. But by the time I finished the course, I had a significant understanding of Leviticus being about relationships: relationships to the land, relationships to people, relationships in all its spectrums."

Understanding Jewish interpretations of the Old Testament enriched and deepened her appreciation for the Scripture in a completely new way, the same way making space for new cultures and traditions within the church through interculturality can enrich and deepen many aspects of the church, Martin said.

Walking in the footsteps

The students come to Ecce Homo from around the world. A recent cohort had 11 students from 10 countries. About a quarter of the students are religious men and women, the rest are lay leaders. The center also cooperates with half a dozen Catholic colleges to offer course credit and invite visiting professors.

One unintended consequence, said O'Reilly, is several visiting professors have started incorporating Jewish perspectives into their classes at their home universities, spreading their message to farther corners of the globe.

"After Vatican II, Jewish and Christian relationships went from contempt to esteem," said O'Reilly. "The era of contempt has passed. We not only accept [Jews] but understand there are very important things they can teach us."

Zdunich noted that simply bringing participants to Israel is eye-opening on an interfaith level. For many students, it is the first opportunity to see "living Judaism," as a contemporary religion made up of rich traditions, complexities and conflicts that characterize any faith. Teaching the courses in the midst of a modern Jewish society also helps students understand more deeply how ancient Jewish culture shaped biblical figures, said Martin.

Many of the participants have never met a Jewish person before, or may have harbored prejudices toward Muslims. "It opens up a whole new awareness and helps the students understand inclusivity," said O'Reilly. "We're located in the Muslim Quarter, so students get to know the Muslims working here, and they stop seeing them as 'others.' "

"Look at this place — we're a five-minute walk from the Western Wall, the Holy Sepulcher and the Temple Mount," said O'Reilly. "You can see archaeology and faith. As soon as they arrive, a lot of our job is done because the location is so magnificent."

* The identity of the founders of the precursor to the Ecce Homo Center for Biblical Formation has been updated.

** This story has been updated to clarify course content.

*** An earlier version of this story stated a different book of the Bible. 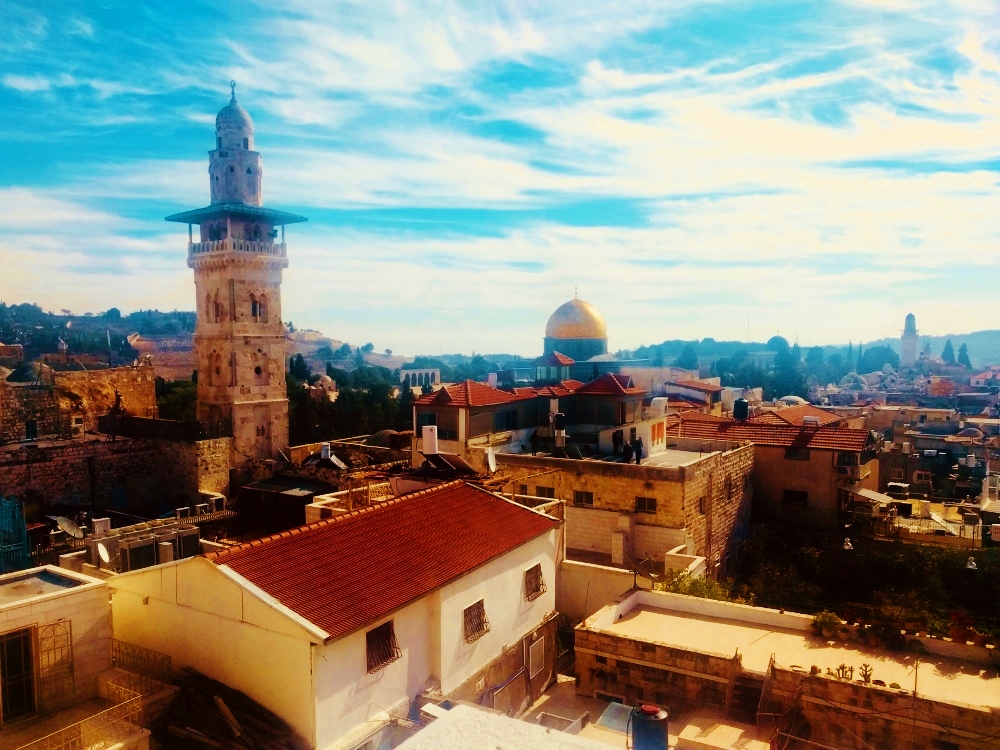 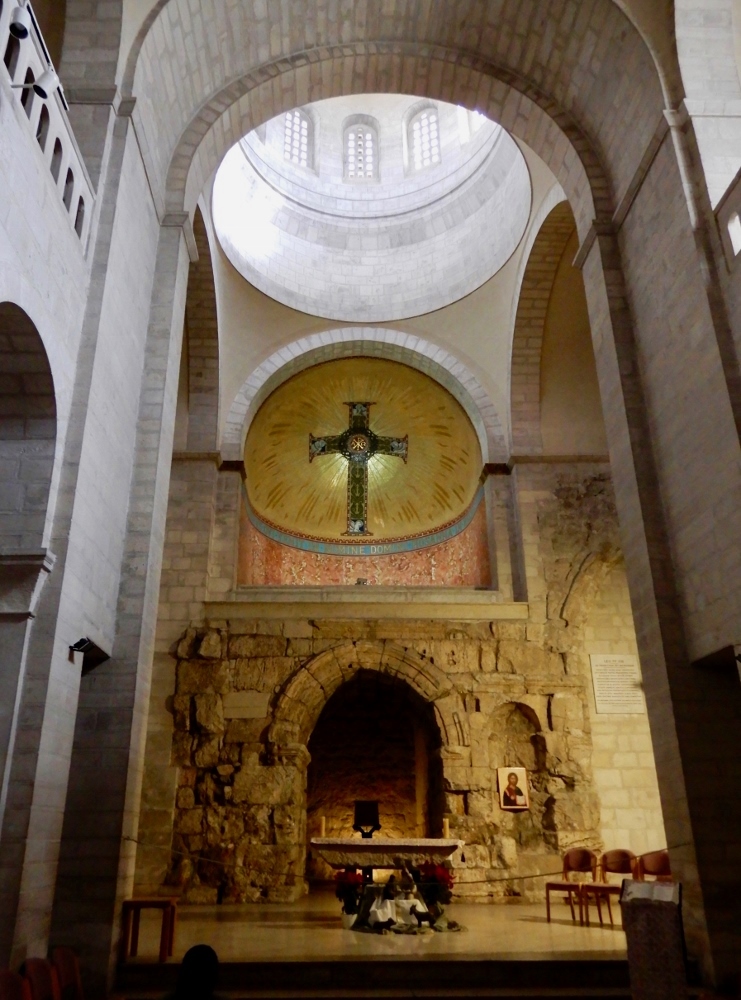 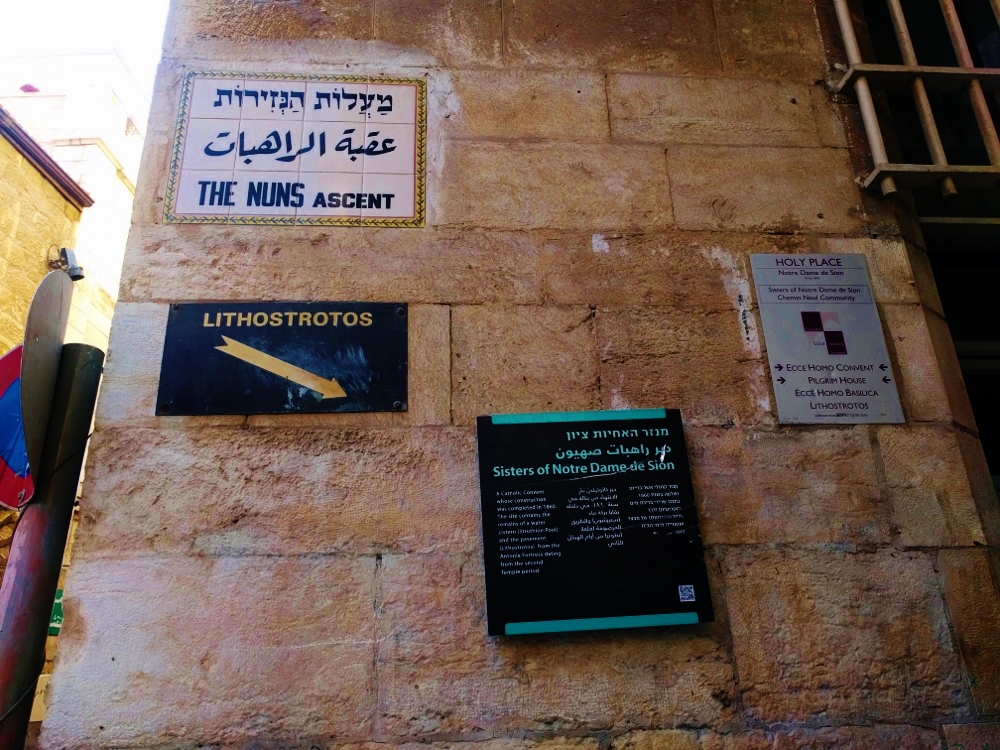 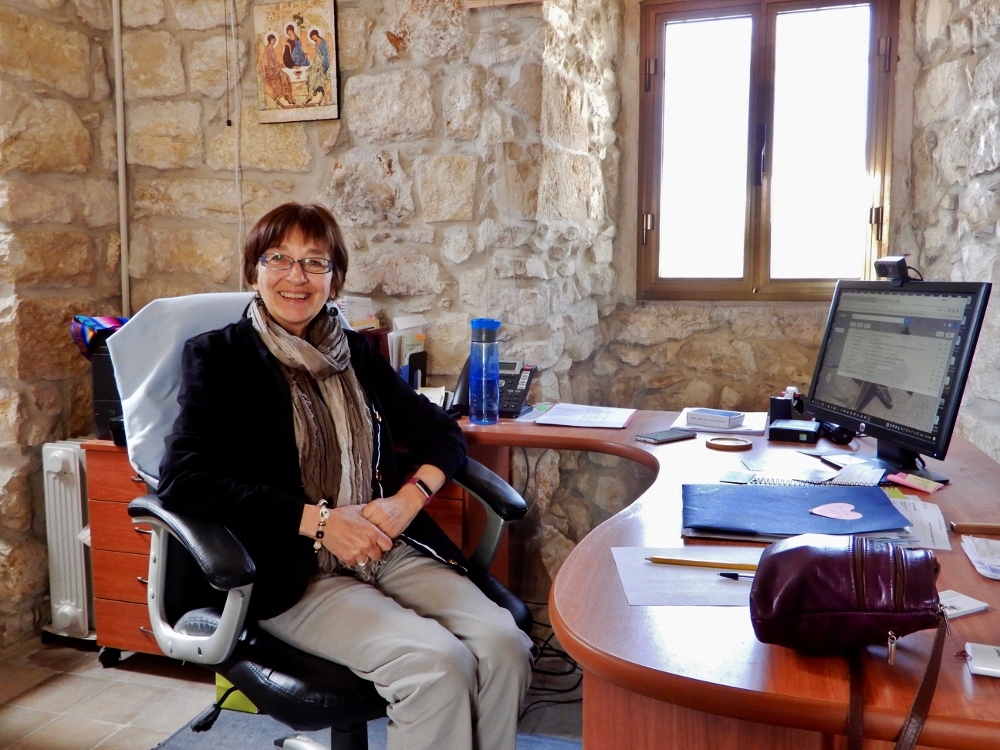 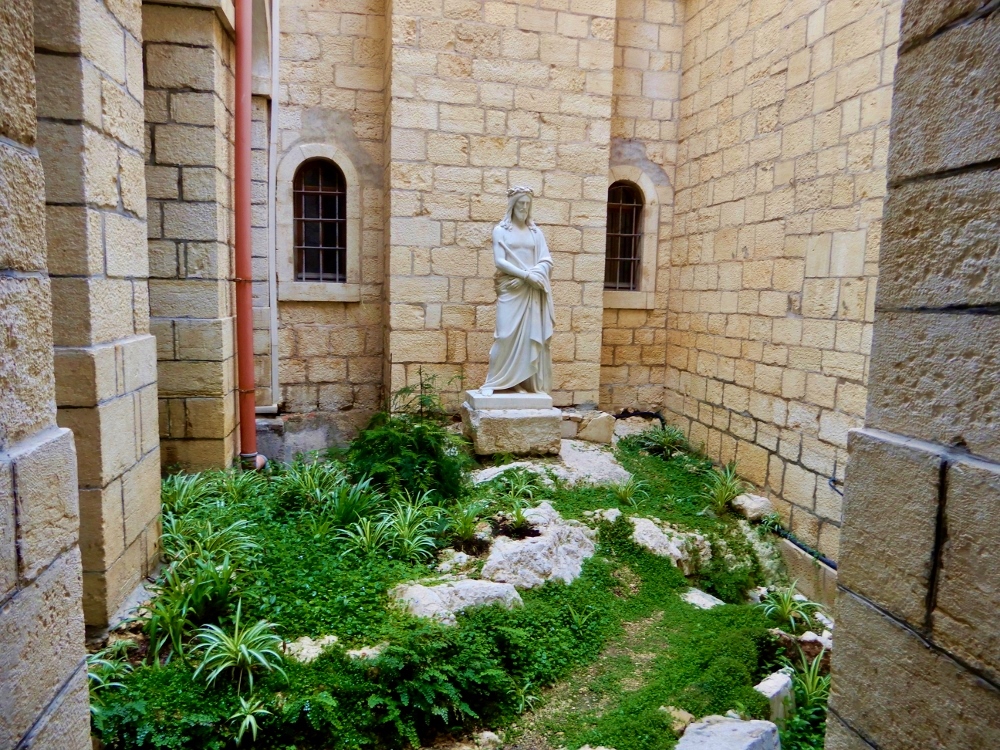 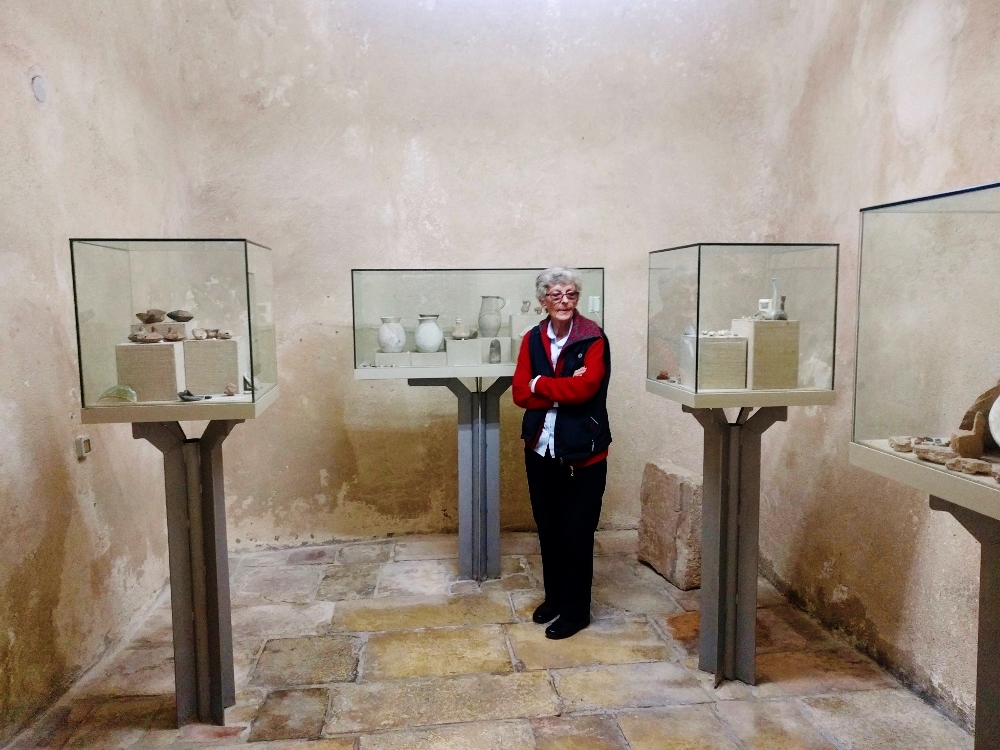 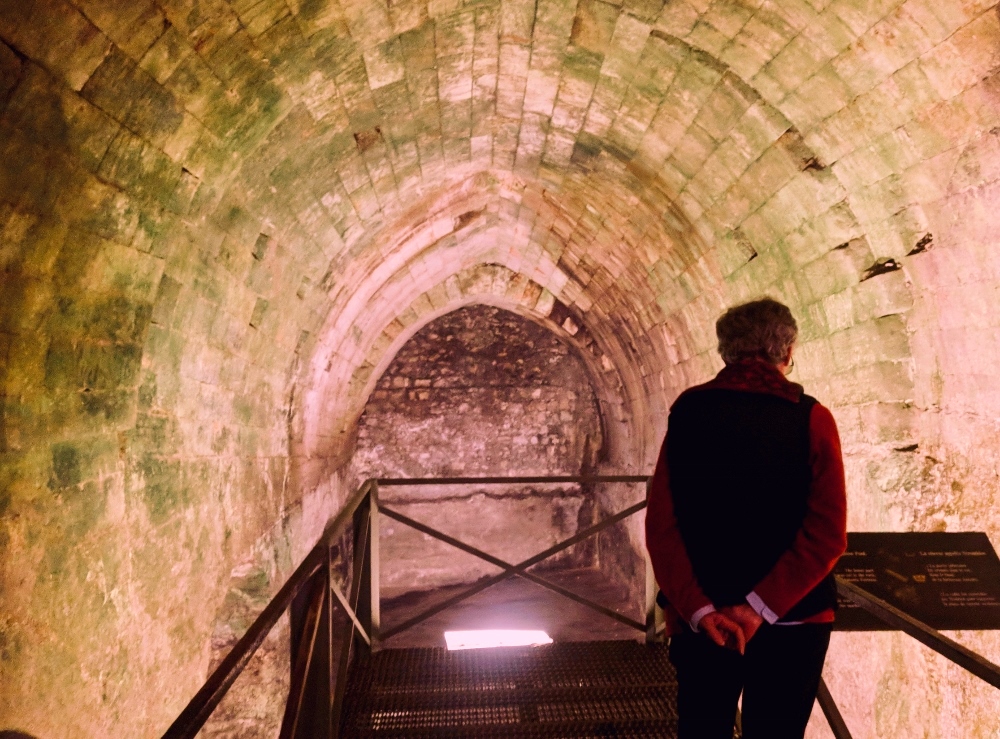 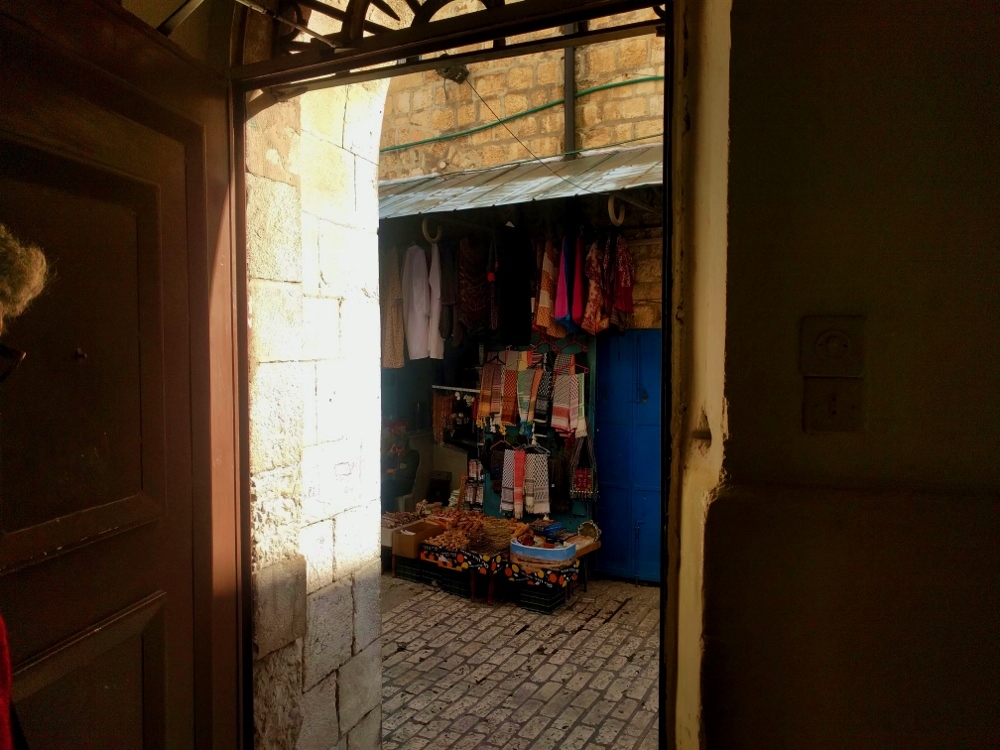