Handing the pen to African sisters

• You can read an excerpt from Voices of Courage here. 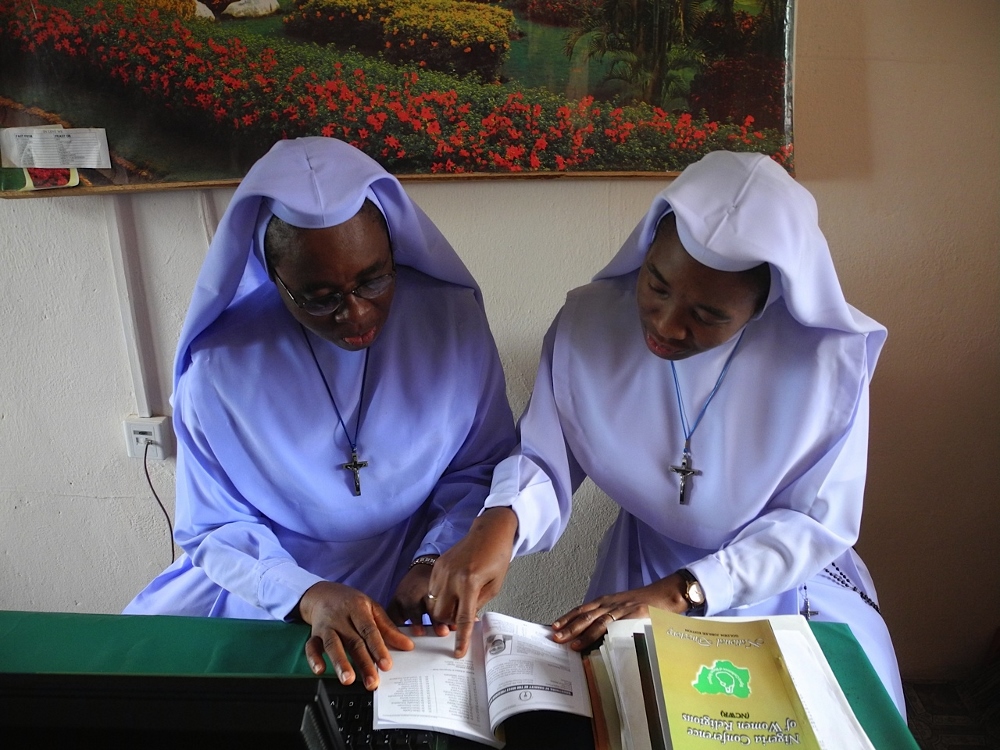 Sr. Mary Nicolette Ihenacho, Immaculate Heart of Mary Sister, left, is the former executive secretary of the Nigeria Conference of Women Religious and pictured in her office with assistant secretary Sr. Mary Amanda Nwagbo, IHM. They are reading the 2014 edition of a directory of congregations. The directory helped organize congregations and also sparked connections by providing clear information on each congregation’s charism. (GSR photo / Melanie Lidman)

Scranton, Pennsylvania — When author and editor Sr. Jane Wakahiu was trying to write her doctoral dissertation at Marywood University in 2009 and 2010, she encountered a dearth of stories told by African sisters about their own journeys.

Wakahiu is a member of the Little Sisters of St. Francis of Assisi community.

“I was trying to research women religious and leadership development, but even when you have sisters with PhDs or advanced theology degrees, they’re writing about the gospel or the Bible, but not about the journey of religious women in Africa and their challenges and successes,” she said. “I felt this story needs to be told. You need to understand where you’ve come from in order to understand where you want to go.”

“Who will tell the story of African sisters if not themselves?” asked Wakahiu, who commissioned the essays and advised the researchers during the past two years.

The essays in Voices of Courage: Historical, Sociocultural, and Educational Journeys of Women Religious in East and Central Africa explore congregations in Kenya, Malawi, Uganda and Zambia, as well as national associations and regional trends. Some deal with projects in specific congregations, such as recruiting and formation. One essay explores the stigma against sisters in Zambia who became infected with HIV during their ministries due to inadequate protection at their clinics and hospitals. Another investigates the relationship between a congregation in Kenya and one in Minnesota, who worked together to establish a training institute in Kenya and grappled with the issues of cultural differences, privilege and the remnants of colonialism.

In Malawi, a priest examined the positive impact the Sisters of Our Lady schools had on educating girls, and Wakahiu is encouraged seeing church leaders take an active interest in celebrating sisters’ work.

Wakahiu has two main goals with Voices of Courage. One is to encourage congregations to act as their own archivists, keeping track of how they have grown and adapted to new challenges and a changing society. The other is to inspire deep conversations about issues that affect many African sisters, including intra-congregational cooperation, the role of national associations, and cultural challenges. 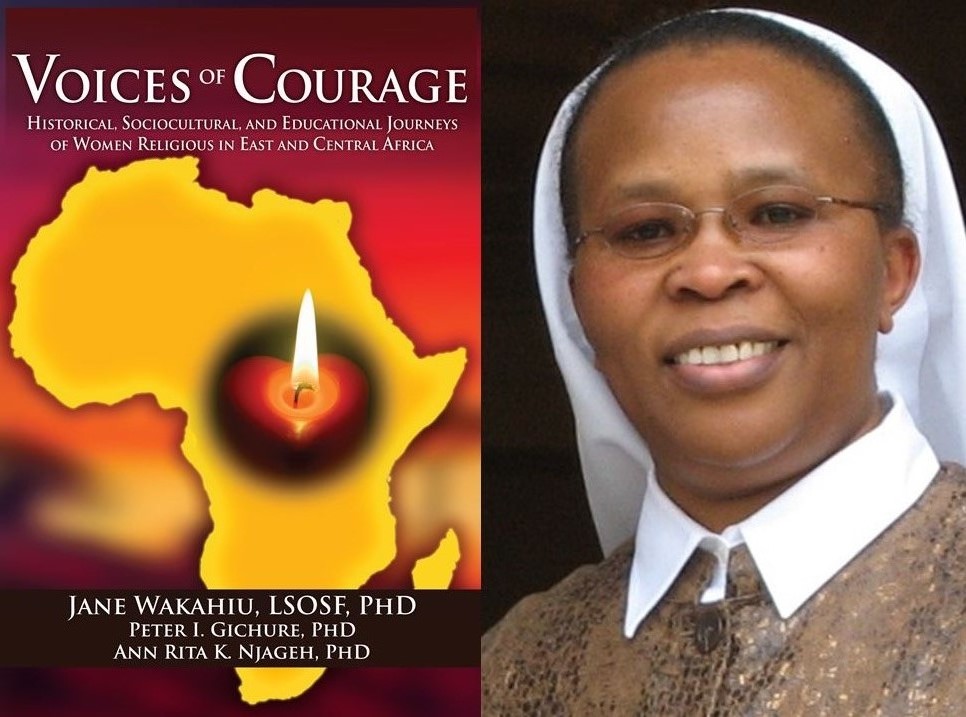 Left, Cover artwork for the forthcoming "Voices of Courage" book. (Courtesy of Pauline Press). Right, Sr. Jane Wakahiu, who is the head editor and creator of the project. (Submitted photo)

“Religious life in Africa is different from religious life in the U.S.,” said Wakahiu, who is originally from Kenya and lives in Scranton, Pennsylvania, where she is the executive director of the African Sisters Education Collaborative based at Marywood University.

“Political, economic and cultural situations play a huge role in that context. Here [in the United States], they’re talking about policies and engaging in things like NETWORK [the Catholic sisters’ social justice lobby]. In Africa, we’re not yet ready to form a group like NETWORK. We’re still talking about providing food and healthcare.”

But she noticed that sisters in the U.S. do a lot of self-reflection. They publish papers and books examining the declining numbers of women religious or the sisters’ changing roles in healthcare. She wants African sisters to engage in the same kind of introspection to ascertain ways to be most effective, but to make sure that this discovery process is initiated and carried out on a local level.

“Stories of religious life in Africa have been told by other people [non-Africans], who interpret from their own cultural lens,” she said. “But these women are now telling the story from their own culture, their own experiences. This is not only for the sake of telling the story of African sisters but also documenting it, so over time we can look at that thread, we can see how we got from point A to point B, and we can see the results.”

This kind of archival work is important not only for effective ministries, but also to ensure that both European and African voices recount the history of the church’s expansion in Africa.

Wakahiu explained that her congregation in Kenya has a small booklet of the memories of Sr. Mary John, one of the first Kenyans to join the Little Sisters of St. Francis of Assisi in 1923. She professed in 1928 and spent many years working as a schoolteacher. In John’s memoir, which was published in 1995 on the occasion of the congregation’s platinum jubilee, she talked about the tension surrounding the first Kenyan sisters. “[John wrote] that our [European] founder used to be laughed at, that she’s making African girls become white,” Wakahiu said.

Although John has passed away, her documented memories help younger sisters understand the early relationship between African and European sisters and how that affects their continued relationship today. 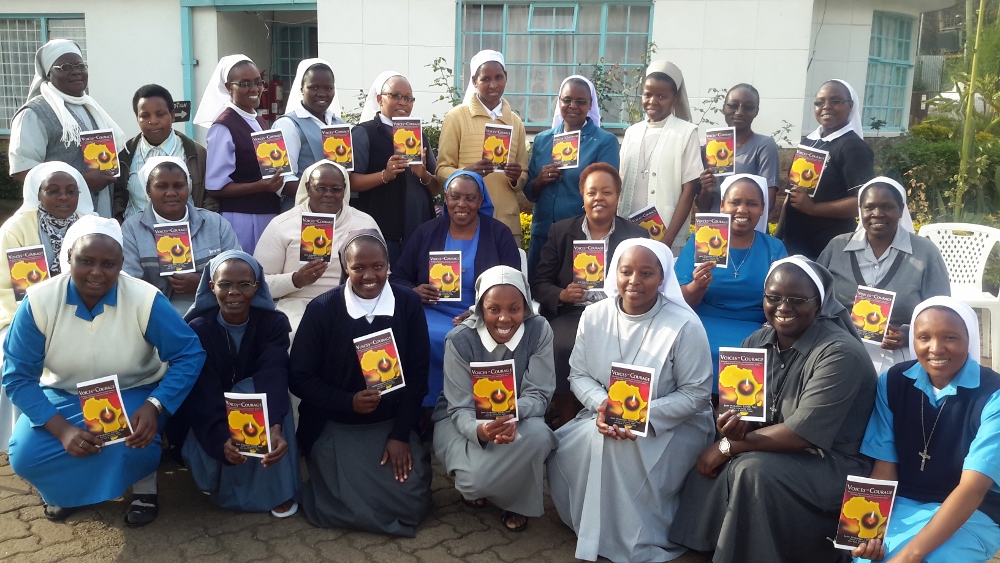 Sisters who participated in the finance track of the Sisters Leadership Development Initiative hold up copies of “Voices of Courage” at the Tumaini Center in Nairobi, Kenya. (Submitted photo)

“[The relationship] was unequal and painful,” said Wakahiu. “Most sisters who joined at an early age could not communicate in English. They could not read. They had no education so they were doing the farming, agriculture, house cleaning and chores for European sisters.”

The church’s hierarchy was interwoven with colonialism, a painful relationship that the church is still struggling to reshape even decades after independence. As many congregations in Africa are now celebrating 50 or 100 years, it’s important to record and celebrate the stories of these first sisters in Africa, both Europeans and Africans, Wakahiu explained.

“Those are women who came to Africa from Europe, they have a story. A story of leaving their families and settling in Africa, a story of trying to learn a new language and eating new food and establishing a new home, a story of catechizing people and the connection between these Europeans and African girls.”

The Africans have a story as well, also of leaving their homes for something new and strange.

“What inspired African girls who were raised in a traditional religion to leave that and enter convents?” Wakahiu asked. “In that connection, there is a synergy, there is relationship, there is feeling. Whether it was a relationship of have and have nots, it was a transformative relationship.

“History has to help us overcome hate,” she continued. “OK, this happened, that’s why we were marginalized, so what should we do now to change that story? That story will remain, but we must change the situation, because we cannot continue being defined by history.”

The first step of this healing is for sisters to understand their history by preserving their stories. Wakahiu helped organize an archivist training conference last year in Nairobi for 55 sisters from Kenya, Uganda, Tanzania and South Sudan. Two U.S. sisters who are trained archivists flew to Nairobi to advise sisters on ways to preserve the history of their congregations. 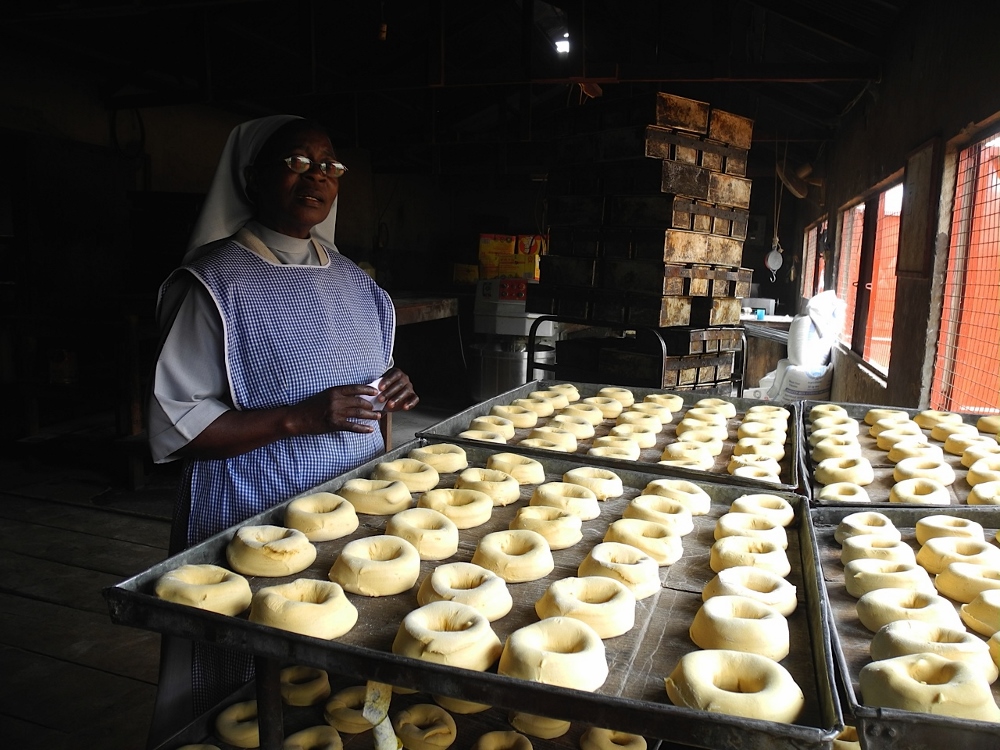 The Gogonya Bakery is part of a large vocational school in Uganda from the Immaculate Heart of Mary Reparatrix Sisters, where young women get hands-on training in catering, cooking, and baking in a working restaurant and bakery. The self-sustaining businesses help the sisters keep tuition costs as low as possible. (GSR photo / Melanie Lidman)

These sister archivists will work on a local level. The Voices of Courage book is the formal academic response. Wakahiu’s inspiration for the anthology came during a long flight from Africa to the U.S., after visiting many projects associated with her certification program ASEC and Sisters’ Leadership Development Institute. (These programs are funded by the Conrad N. Hilton Foundation, which also funds Global Sisters Report.) Wakahiu sat on the plane and sketched an outline for the book and its title.

She brainstormed with her two colleagues who became co-editors, Fr. Peter I. Gichure, a professor at the Catholic University of Eastern Africa, and Ann Rita K. Njageh, a senior research fellow who teaches research, monitoring and evaluation courses at the same university. Wakahiu then started reaching out to academics across East and Central Africa, asking if they would consider submitting research. More than two dozen people enthusiastically submitted abstracts and proposals for research, even before Wakahiu could promise funding. It took Wakahiu more than a year to secure funding for their research in July 2014 from the GHR Foundation and the ASEC program.

Some of the research was not completed in time or did not stand up to academic standards, so is not in the final published version. The 19 studies that are in the book provide a wide range of topics for further study, though its academic language may be difficult for some to navigate. Wakahiu said her main audience is sisters, foundations and universities. Her ultimate goal is to create a place where academics can study African sisters, like the Center for Applied Research of the Apostolate (CARA) at Georgetown University.

And she hopes the book will also inspire conversations.

“The superiors and sisters who read the book, they’ll see the thread of a particular story, they’ll see it’s not their problem that they’re experiencing alone,” said Wakahiu. “You can hold a conversation with the national associations about different trends, like how we see a need for education for sisters is important.”

Many of the essays deal with the importance of higher education for sisters so they can serve in professional capacities and increase the effectiveness of their work. Wakahiu hopes the academic information will help superiors strapped for funds understand the inescapable evidence pointing to the importance of higher education, and that these conversations will create better ministries and stronger bonds between congregations.

“The problems that sisters are addressing today are different from the 1940s,” said Wakahiu. “It has been part courage, part hope, part endurance to get to where we are. We stand on the shoulders [of previous sisters], and others will stand on our shoulders, and then people will stand on their shoulders. When you braid hair, every knot you’re putting in is a stage in life. When you braid hair, it becomes stronger than when it is a single hair. That’s what we’re doing through telling these stories.” 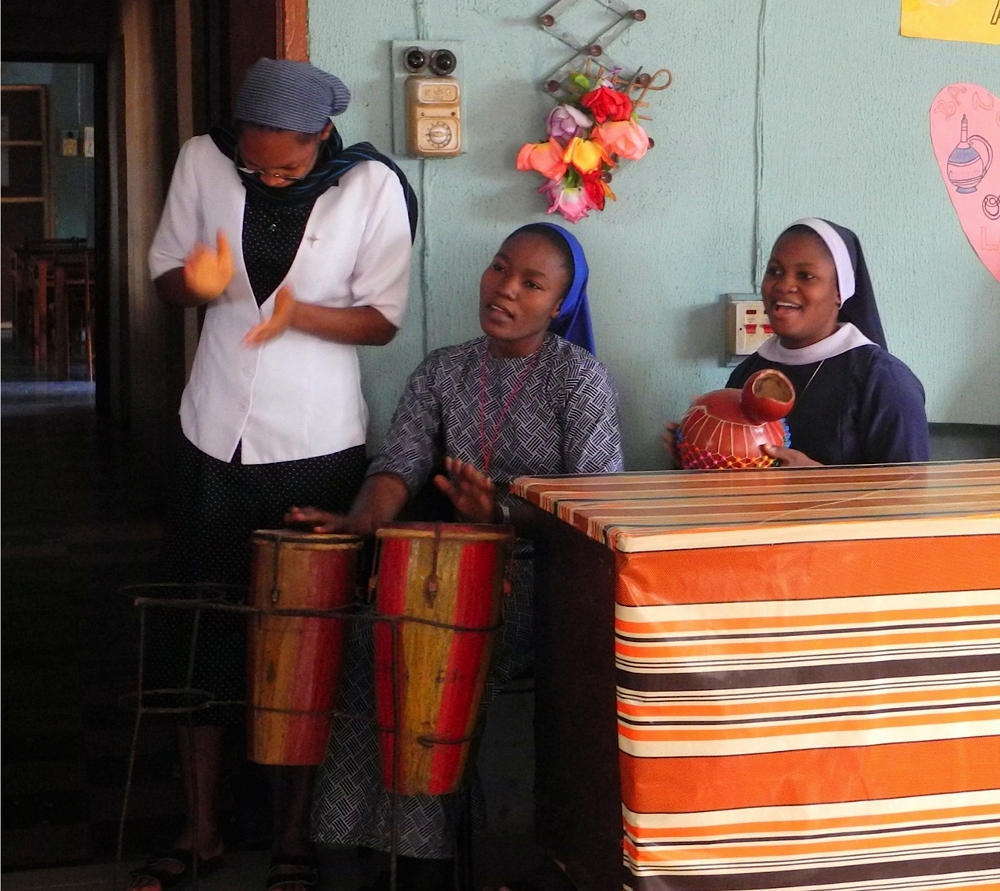 Sisters in Nigeria on a retreat before their final vows play traditional drums during a ceremony to welcome guests. (GSR photo / Melanie Lidman)

Voices of Courage is published by Pauline Publishing House and will be officially launched Oct. 1, 2015, at the Catholic University of Eastern Africa. Click here to read an excerpt from the book.

Related: An excerpt from Voices of Courage