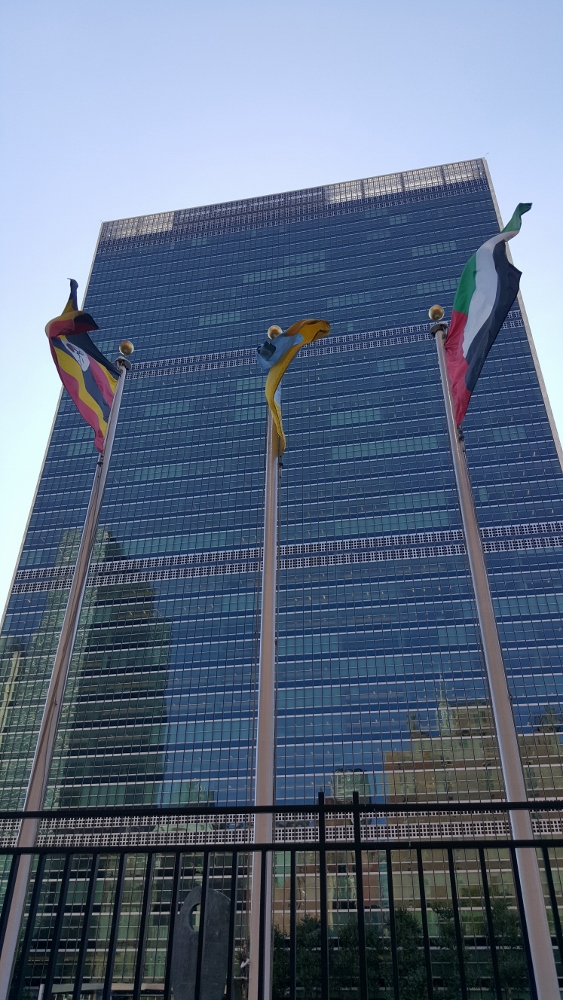 New York, N.Y. — For women religious working within the United Nations, 2016 is shaping up as a year to press forward to achieve the hard-fought goals set out in 2015.

Last year was marked by vision and good intentions. The 193 U.N.-member states agreed to a new set of development goals to reduce poverty and protect the environment, and also shepherded a climate change agreement to help reduce the levels of global greenhouse emissions.

"I thought we ended the year on a high," said Sr. Jean Stoner, the sisters of Notre Dame de Namur's NGO representative at the United Nations. "It was an excellent year."

It certainly was a year that brought the Catholic church a lot of attention. Pope Francis' address on global poverty is still being talked about throughout the halls of the U.N. "He blew everybody out of the water," Stoner said in a recent interview with GSR, and she credits the pontiff for lifting up Catholic concepts like "the common good" at a critical moment.

With a new year under way, the U.N. system has its hands full. The U.N.'s refugee arm continues to coordinate global efforts to respond to the record number of displaced people in the world. The issue of migration deeply concerns the sisters at the U.N., though their advocacy work on the issue is not felt as directly as the issues pertaining to poverty because the U.N.'s refugee work — the United Nations High Commissioner for Refugees — is based in Geneva, and not New York, the U.N.'s headquarters.

There is certainly plenty to do in New York. The U.N. must now determine how best to implement the lofty goals of reducing poverty and creating a more environmentally sustainable world. It will do this with the help and prodding of the many advocacy groups — such as dozens of religious congregations.

High-minded goals and aspirations may take a back seat to the tricky part — the "how" of getting things done. "It's terribly important," Sr. Margaret Mayce, representative of the Dominican Leadership Conference, said about the "behind-the-scenes" work of how to carry out the new development goals.

Sr. Michele Morek, coordinator of UNANIMA, a U.N.-based coalition of Catholic congregations focused on concerns of women and children, said that all parties at the U.N. — member states, those who work within the United Nations system and advocates like her and her sister colleagues — are now focusing on how exactly the goals can be achieved and measured. 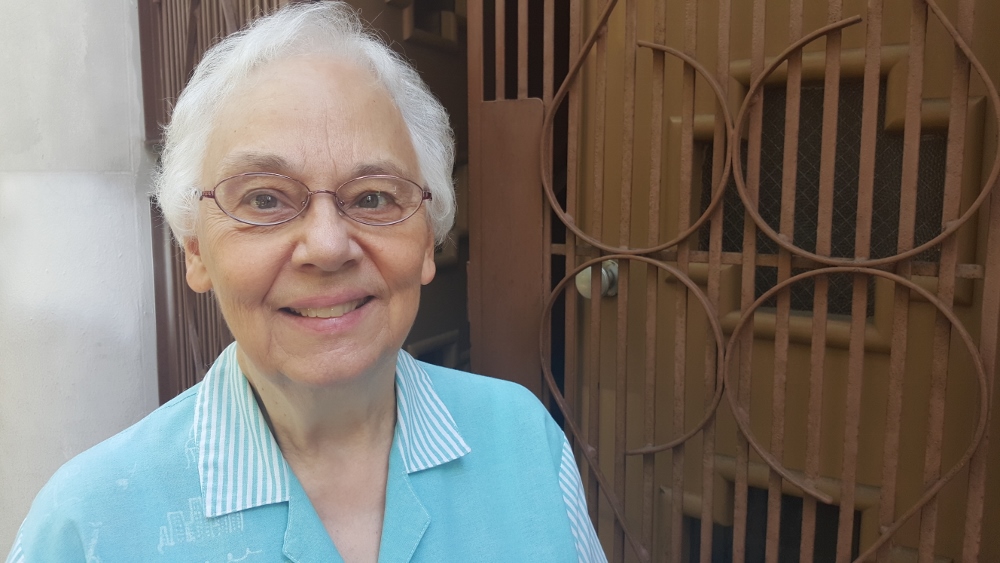 At the center of attention for many have been the meetings this month of the U.N.'s Commission for Social Development, which has examined how the U.N.-member states will tackle the new Sustainable Development Goals. These new goals replace the Millennium Development Goals that had been set by the U.N. in 2000 and eyed targets to eradicate poverty and other problems by 2015.

At the commission's Feb. 3-12 meetings, Catholic sisters stressed the need to take into account "the grievances and voices of vulnerable populations everywhere," said Sr. Celine Paramundayil, who represents the Medical Mission Sisters at the U.N., and is one of more than 100 religious congregations working at the U.N.

Mayce, who chairs the NGO Committee on Social Development, said that sustainable social progress must be rooted in "action-oriented policies." Collaboration and partnerships between government and non-governmental groups can "ensure an international community that hears everyone, neglects no one" and respects all, she said.

A 2015 report card about the earlier goals noted that extreme poverty had "declined significantly over the last two decades. "In 1990, for example, "nearly half of the population in the developing world lived on less than $1.25 a day; that proportion dropped to 14 per cent in 2015," the report said. "Globally, the number of people living in extreme poverty has declined by more than half, falling from 1.9 billion in 1990 to 836 million in 2015," the U.N. noted, and with most of the progress made since the year 2000.

However, the assessment did not minimize continuing challenges — and what it noted were "significant gaps." Despite "remarkable gains," U.N. Secretary-General Ban Ki-moon said in a foreword to the report, "I am keenly aware that inequalities persist and that progress has been uneven. "

The report noted that, "Millions of people are being left behind, especially the poorest and those disadvantaged because of their sex, age, disability, ethnicity or geographic location." Targeted efforts, it said, are still needed "to reach the most vulnerable people. Of particular concern: the persistence of gender inequality. "Women continue to face discrimination in access to work, economic assets and participation in private and public decision-making," the U.N. said. "Women are also more likely to live in poverty than men."

The new goals, which are sometimes called a global 'to-do list" have a similar timeline — 15 years out — and the same notable ambition, though they remain goals, and are not formal legally-binding treaties. The first goal, for example, seeks to "end poverty in all its forms everywhere." The fifth goal seeks to "achieve gender equality and empower all women and girls." (This goal will be focus of the sixtieth meeting of the U.N.'s Commission on the Status of Women, which convenes March 14-24.)

The new goals, 17 in all, differ from the earlier ones in several key respects. For instance, earlier goals were fashioned along the lines of rich nations assisting those in poor countries — an older model of approaching problems. 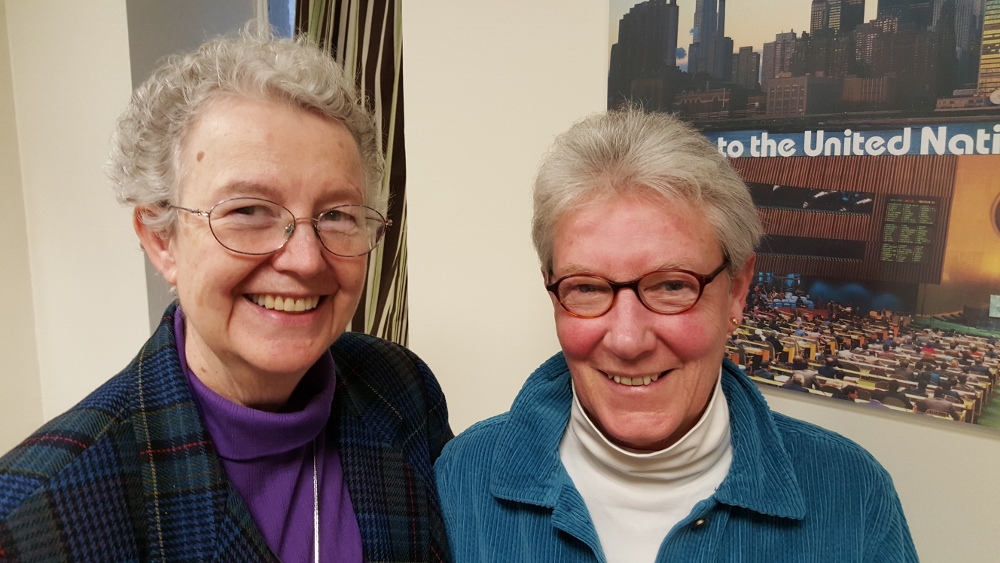 The new goals are meant to address broad challenges. For example, income inequality is now a world-wide problem — in developed countries like the United States as well as poorer countries.

Another difference is that the new goals "must be implemented sustainably," Stoner said. As defined by the U.N., sustainable development "improves living conditions in the present without compromising the resources of future generations."

If sustainability is now a watchword, so is concern about economic inequality. Sisters working at the U.N. say the problem of inequality is daunting. Several cited a recent Oxfam report that concluded that as few as 62 billionaires have as much wealth as one-half of the world's population. Released in January, the Oxfam report also noted that a prediction made last year that one percent of the world's population would have more wealth than the other 99 percent by 2016 actually became a reality in 2015.

To many of the sisters and their representatives working at the U.N., that is deeply troubling.

"Inequality leads to the deprivation of the many, which leads to poverty, which is a violation of human rights," said Sally Dunne, the Loretto Community's U.N. representative.

In such a world, the new development goals are also seeking to emphasize that human rights should be a foundation for needed changes. This "right-based approach" gives a new lens through which to view problems and challenges — problems which are now global in scope.

"We live in a globalized world, and everyone has the right to a dignified life," said Paramundayil. She is a passionate advocate for this "right-based approach" because she believes it is a lens which can help empower the poor, women and children.

She also believes it is a lens that needs to counter what she perceives as increasingly corporate influence at the United Nations.

Some of that is due to the shifting world of marketing and branding. Not a five-minute walk from the U.N. is the headquarters of pharmaceutical corporation Pfizer Inc., which has placed signs touting the new goals — sometimes called "the Global Goals."

Some might see that as simply good marketing for getting the word out about the global issue of poverty.

But Paramundayil sees corporate alliances differently. She is a passionate advocate on the issue of multinational corporations not paying sufficient taxes in the countries where they operate, noting that globally the total amount is in the trillions of dollars.

Paramundayil is also uneasy, she says, over the growing influence of institutions, like the Bill & Melinda Gates Foundation, that have connections to the corporate world. She believes the world needs a space where examining issues of critical importance can be done free of corporate influence.

Mayce has a similar though slightly different view. She has said that those in the non-governmental world feel that the corporate voice at the U.N. has "gone a little bit too far now, and that maybe the corporate voice predominates over people's voices." At the same, she has said it is important for corporations to have a voice at the U.N. because that is "where the money is. For the problems facing the world today, implementing changes requires enormous amounts of money."

Whatever influences are present at the United Nations today, the sisters believe their voices are distinctive — and necessary. "We need to keep speaking up," Paramundayil said of the work of Catholic sisters at the U.N., which she called a "ministry, not a job."

Paramundayil and others acknowledge that "keeping on point" about the human dimension of economics and the environment may sometimes aggravate the representatives of nation-states whose governments are ultimately responsible for social conditions in their respective countries. 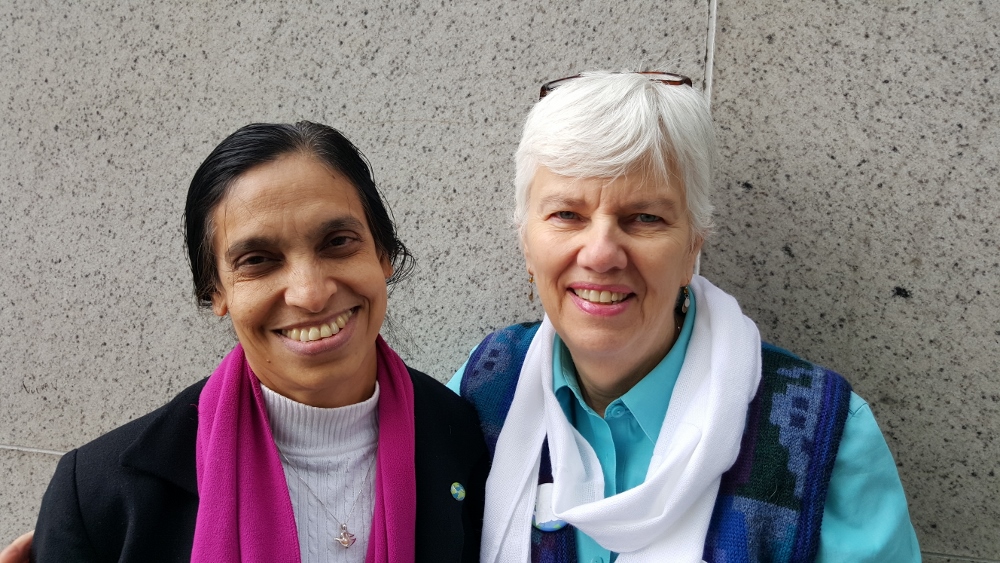 The U.N. acts as a prod, as do the advocacy groups, to try to get member states to live up to their declarations and commitments. As a result, relationships at the U.N. are not always easy — a fact the sisters readily acknowledge. "These are sovereign countries and the diplomats here are responsible to their governments," said Morek. "No one likes the U.N. telling them what to do."

It would be easier, the sisters said, if the states lived up to their commitments.

"Inequality is largely a function of dysfunctional national budgets and priorities," said Mayce. "If the world wanted to eradicate poverty, it could do it in heartbeat."

Though the sisters said while their relations with national representatives at U.N. meetings are cordial, messages like that aren't always welcome from those in the diplomatic corps.

"Some get annoyed with us, sure," said Dunne, who is a lay worker. "But if they're angered, then we're doing our jobs.

"This is sacred work."